The thriving city of Toulouse, spreading from the banks of the Garonne River only 60 miles from Spain, is a great place to explore. With a 2400-year history, it is rich with ancient artifacts and buildings, centuries of art, and attractions that extend into the space age. It is known as the Ville Rose, named so because of the pink brick used in many of its buildings.

Toulouse has Europe’s largest Romanesque church, St. Sernin, which dates from the 11th century, and one of its oldest and largest universities. By contrast, the city is also the headquarters of the aeronautical industry in Europe and has a “City of Space” state-of-the-art theme park with full-size rocket models, a planetarium, and IMAX theater. 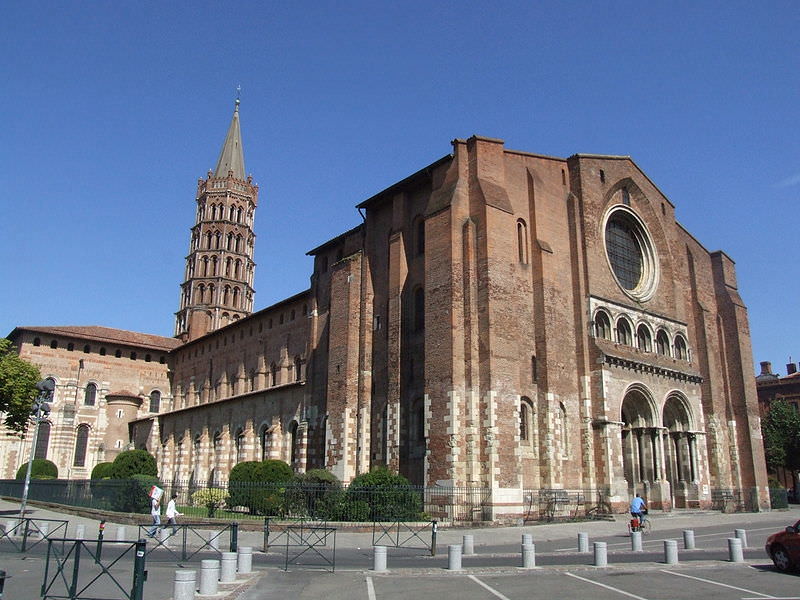 Most of the historic sites are within walking distance of the city center,  Place du Capitole. The Capitole (City Hall), built in the 18th century, is partially open to visitors. As you go up its Grand Staircase to the elegant halls, you’ll see a painting showing the “Floral Games” of poetry that have been held since the 14th century. Poets write and read in the Langue d’Oc, the region’s early language, and winners receive gold or silver flowers. One is the violet, the emblem of Toulouse. 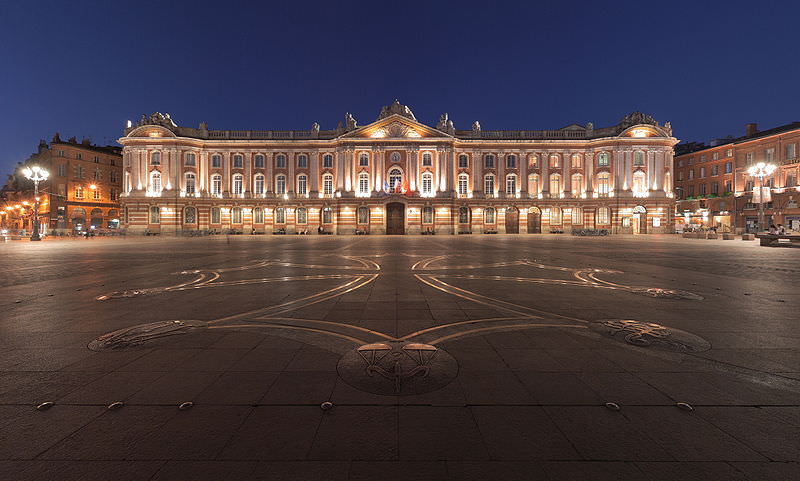 Violets were once a major product of the area, and today they’ve returned, with flowers grown in greenhouses. There’s a city-wide Violet Festival every February, bouquets are sold in the markets, and violet candies and colognes in the shops.
Pilgrims still come to Toulouse, as they have for centuries, stopping on their way to Santiago de Compostela in Spain to pay homage to the saintly relics in St. Sernin church.  Another interesting church is Toulouse Cathedral, a national monument of France. Begun in the 9th century and continually added to or remodeled, it has an unusual, assymetrical look. The Gothic interior has fine 17th century carvings and stained glass. 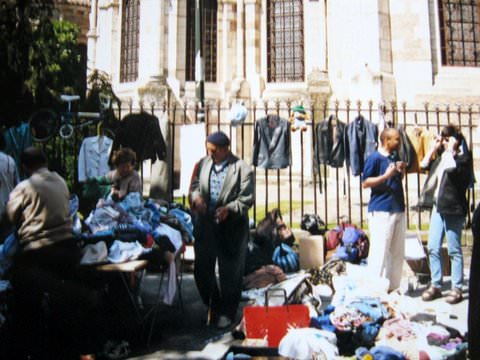 Sidewalk vendors outside a church in Toulouse

Notre Dame de la Daurade, overlooking the Garonne, is more recent,  but long before the basilica, a temple to earlier gods stood on the site. This is where the flowers are blessed before they’re awarded to the winners of the Floral Games. There’s a Black Madonna here (I’m always on the lookout for them) who is venerated in Toulouse. She’s considered a protector of children, pregnant women, and safe childbirth.

The marvels of Toulouse continue to unfold. We liked the Church of Les Jacobins for its beautiful palm tree columns and quiet cloisters, St. Etienne church with its off-center Rose Window, and the Bemberg Foundation’s art masterpieces that range from the Renaissance to the mid-20th century. Augustins Museum, one of the oldest museums in France, also displays magnificent artworks from centuries past.

The city has dozens of good hotels. We liked the Mercure St. George, close to everything we wanted and next to St. George Place, an attractive and lively square.  Another popular lodging, Hôtel des Beaux Artes, is by Pont Neuf and has a lovely atmosphere, helpful staff, and comfortable rooms.

Our favorite restaurant was Emile, on St. George Place, where  perfectly grilled tuna and excellent wine were served at our table on the flowery terrace.  For fine cuisine of the pricey foie gras and truffles variety, the best places in town are Chez Michel Sarran and Les Jardins de l’Opéra.

Written By Marilyn McFarlane for EuropeUpClose.com

I'll be going to Toulouse for a year! Are there any natural attractions nearby?

Toulouse is located in a wonderful spot, near the Pyrenees Mountains to the south, the Mediterranean to the south-east and the Gorges du Tarn to the north-east. Set on the Garonne River, Toulouse is a truly beautiful city. Lucky you to be able to spend a year there; you will have plenty to keep you busy!