There is simply no better way to explore a new country than by bike, especially when that country is Switzerland. Luckily, with some help from My Switzerland and SwissTrails, we were able to spend three-days cycling along the Lakes Route that stretches from French Montreux on Lake Geneva to Bad Horn in the northeastern border of the country.

Also read our guide on hiking in Switzerland>> 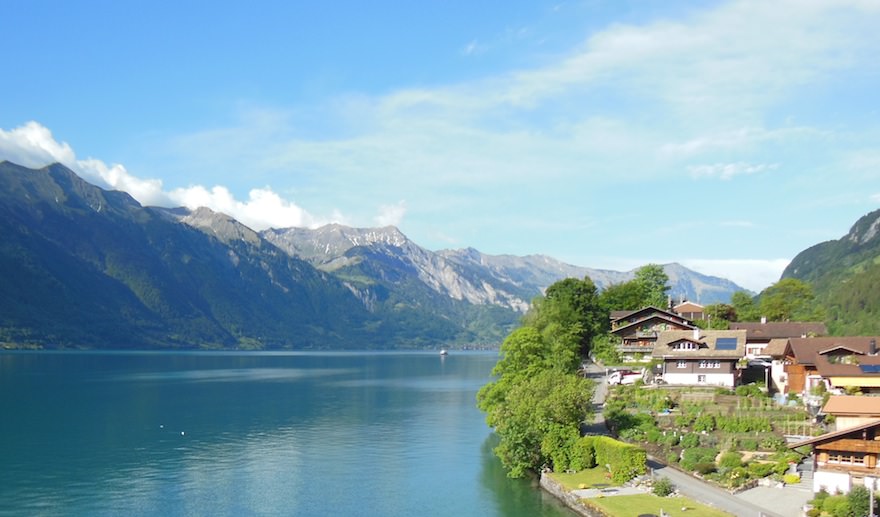 Beautiful Switzerland and the Alps

The alpine nation has always held a special place in my heart. It’s where the Baur family name comes from, so you all have Switzerland to thank for my existence. In reality I’m mostly an ancestral mutt at this point, but I’ve always most identified with my Swiss roots. After cycling the country, I can see why. The smooth countryside roads, the historic and walkable cities, the trains, the mountainous outdoors — this feels like home. The Swiss live the way I try to live in the States.

This particular excursion takes my wife, Melanie, and me through the Bernese Oberland to tourist-favorite Luzern. We begin in Gruyères after a night of fondue in the fortified medieval town, still perfectly constructed after all these centuries. Though I guess staying out of Europe’s wars, of which there have been quite a few since humans first started getting all stabby, will do that. 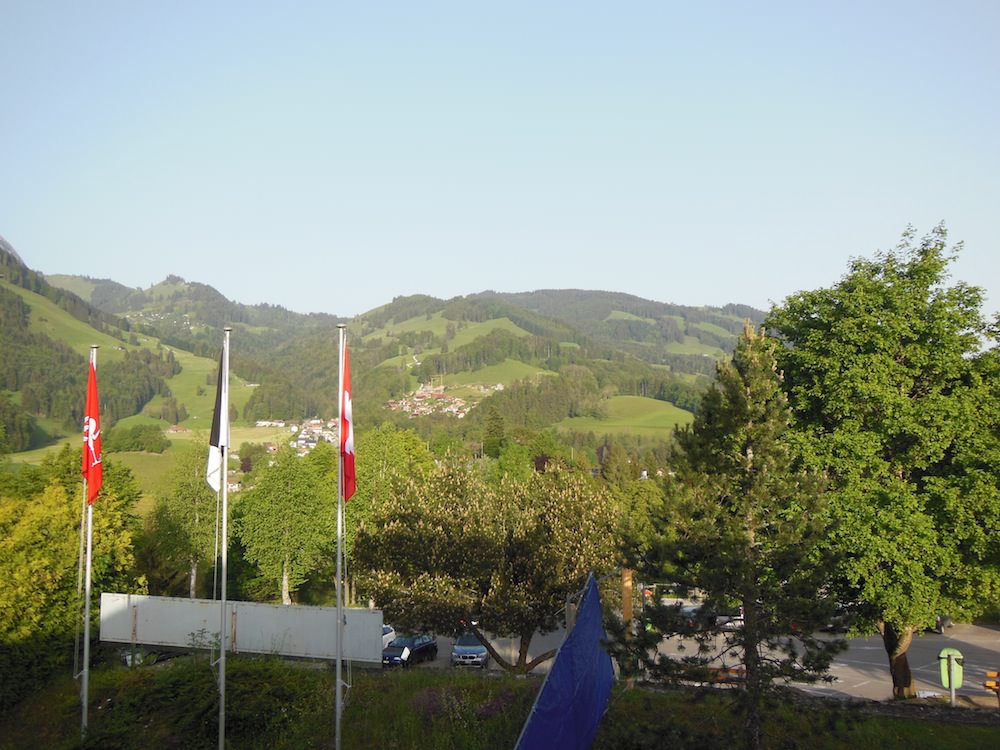 Our journey begins. Grueyeres en route to our first stop

The following morning had us snaking through rural farms with the sound of cow bells chiming across the Swiss countryside. Naturally this came with the, shall we say, unique smell that comes with cows. Thankfully it was just the right amount to let you know you’re in the country without necessitating nose plugs. In fact, I’m pretty sure we swallowed more than a few flies. And it’s hard not to deduce where those flies probably just came from. I think that officially makes us Swiss citizens, no?

Moving along, we used mountain trains to get through the most difficult climbs, which offered panoramic views no writer can properly describe. Of course we avoided many of the serious climbs; this is, afterall, the freakin’ Alps. We ended the first day in Schönried, a typical ski town just a train stop away from Gstaad — a place that is exactly what you want a small town to be; great architecture, colorful and walkable.

Snowcapped mountains stood tall from our back patio at the Ermitage Hotel. You just want to sit here for hours, staring at the breathtaking view as you swear to yourself that you’ll never complain about anything again.

Rising early, we headed toward Lake Thun, skirting along the coastline toward Interlaken. Though rather than spend the night in quite possibly Switzerland’s most touristy town, we continued along Lake Brienz to the small coastal village of Iseltwald where we were able to enjoy another quiet night, this time,at the Strandhotel. Here, we dined on seafood and watched the passing ships that connect the various towns on opposite ends of the lake. 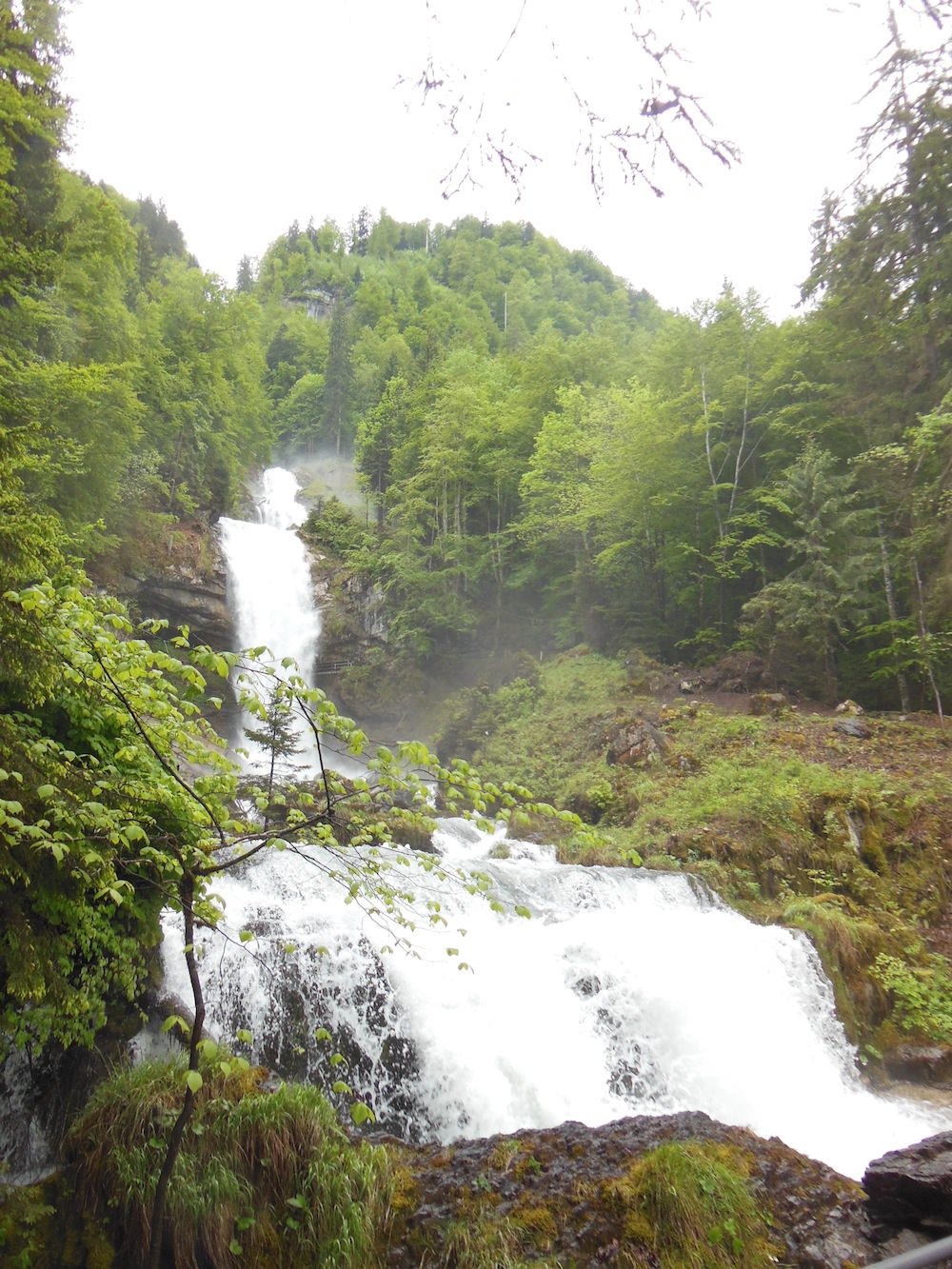 Lots to see along the way

On our third morning, we awoke to damp weather unlike anything we had experienced the previous two days. Though all things considered, it was hardly an obstacle. In fact, the cool mist added to the experience as we pedaled through Swiss forests on a mixture of paved roads and dirt trails. Early on in the day’s ride, we came up behind what I can only assume was a family of ranchers escorting their herd up the mountain. Some German language skills would have come in handy here. We could only hope we did the right thing by slowly tip-toeing our way around the cows to continue on our final leg. As we rode off, we could hear the most senior rancher rattle off some friendly comments to our linguistically deaf ears. This, of course, was followed by one of the most difficult climbs I have ever encountered — right up there with riding Belgium’s notorious Ronde van Vlaanderen.

But the payoff of viewing the Giessbach Waterfall was worth it all. This thing tumbles over 14 stages, so please excuse me for not being able to get this wondrous, thundering creation into one photo shot. 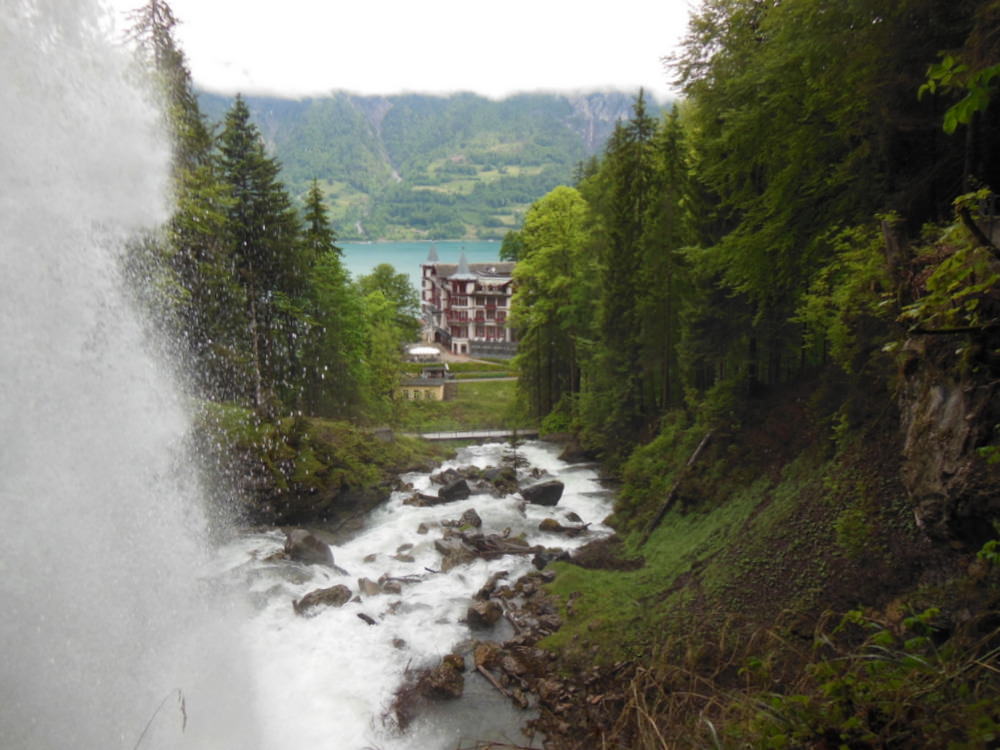 Using a mixture of trains and our bikes, we ended our three-day bike trip through the Oberland in Luzern, which expat writer, Diccon Bewes, calls Switzerland’s prettiest city in his book, Swiss Watching: Inside the Land of Milk and Money

— a must for any serious traveler. It’s easy to see why the residents of this city take pride in the fantastic architecture that would leave any city planner jealous. Moreover, they have done an excellent job of keeping cars out of plazas and squares originally built for pedestrians. 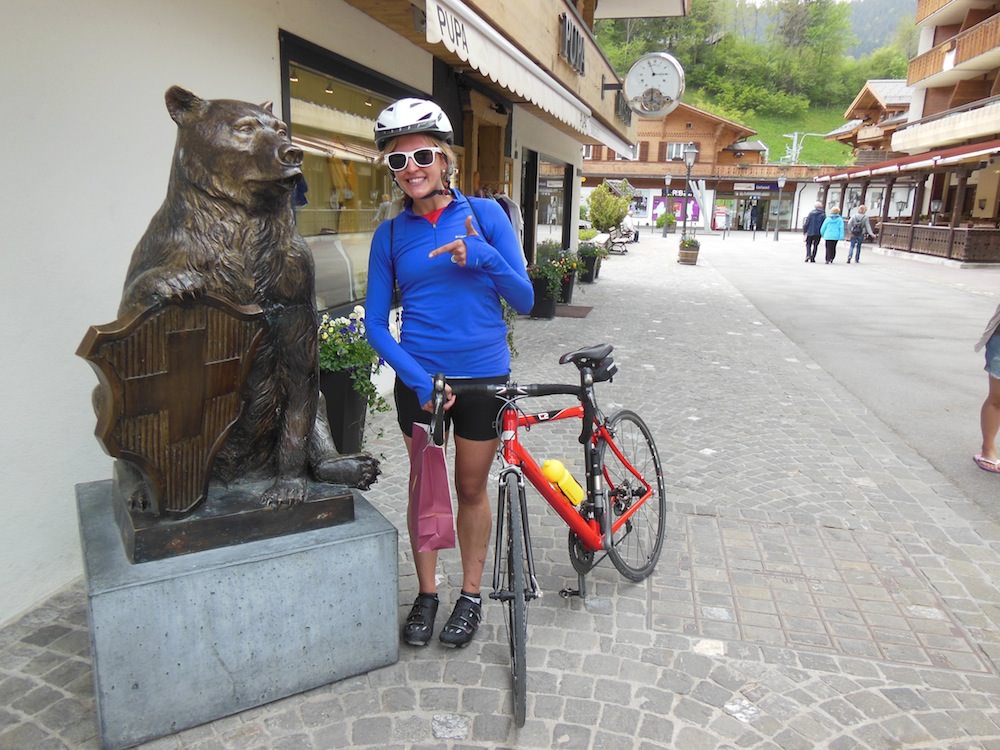 Speaking of those metal death-boxes (cars), our experience cycling Switzerland opened the country up to us in a way a car never could. Biking is a much more intimate mode of travel and conquering the challenging climbs makes you feel like you earned the experience in some strange way. And, by the end of your trek, you’ll surely be planning your return trip. Except next time, I think, I’ll be taking on the entire route! 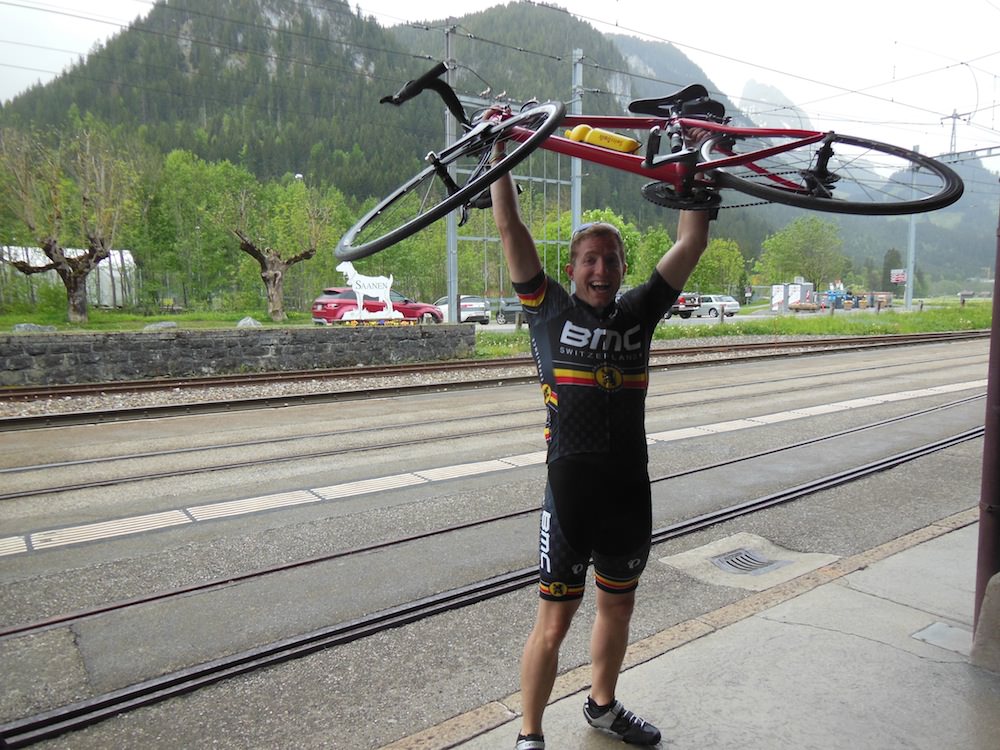 Joe feeling victorious upon their arrival to Saanen

Written by and photos by Guest Contributor, Joe Baur for EuropeUpClose.com

Joe Baur is an author, writer, and filmmaker who has worked for a variety of local and national publications, including Matador Network, Yahoo! Travel, National Geographic and BBC Travel. In addition to freelance writing, he is the author of Best Hikes Near Cleveland and director of numerous travelogues from across the globe. You’ll currently find him working in Ciudad Colón, Costa Rica, because spending his first year of marriage where everyone vacations seemed like a good idea. Follow him at @BaurJoe and joebaur.com.

You are a beautiful human being!

Congrats on every thing you are doing.

We really enjoy your stories and are dreaming of doing it soon in the future!!! Thanks so much.