I wave farewell to sunny Akureyri as I fly south to Reykjavik, Iceland’s capital. I’m aware the weather is greyer and wetter there and wonder if I’ll need my rain suit. Its late September, after all. Sure enough it’s raining as I land, and clouds darken when I reach my hotel. Perhaps my good fortune has evaporated after three weeks of sunshine. The tour of Reykjavik this afternoon proves otherwise — an odd shower but mostly sunny. 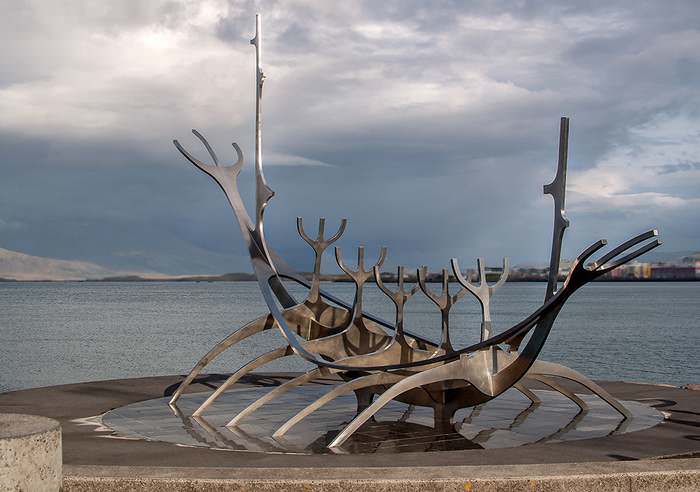 Iceland is a country of intense contrasts, and not just meteorologically. We all know about “The land of fire and ice” tourism slogan, however that’s not all — black and white, hot and cold, the midnight sun in summer and the dark of mid-winter. But I’m more struck by the abundant coexistence of ancient and modern. A thousand-year-old parliament governs a very progressive population, and ultra-modern technologies harness their millennia-old earth energy.

My visit focuses on southern Iceland outside the city. Day-long guided tours are the best way to hit the highlights.

The clouds threaten again as I wait outside my hotel for GeoIceland to pick me up for their Golden Circle tour. I appreciate the ten-passenger, Mercedes van with huge clean windows and the welcome of my guide, Baldvin. He says, “First, I’m taking you on a detour that few get to experience.” 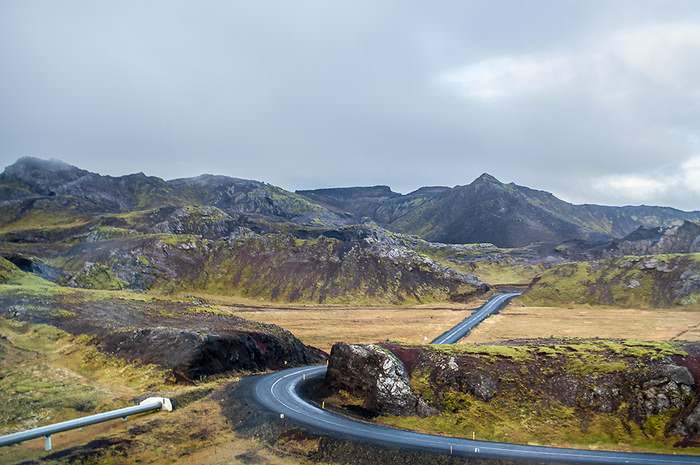 Iceland doesn’t heat its household hot water, it has to cool it down as it pours out of the earth at 212F (100C) or higher.

He drives east through craggy mountains on a road built to service the new hot water pipeline supplying Reykjavik and Baldvin, turned botanist, teaches us about the sub-Arctic flora that grows on lava. 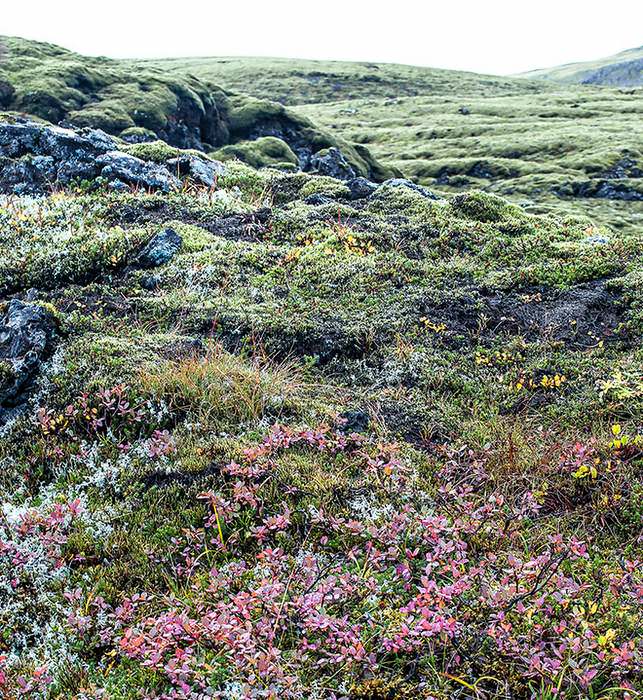 The grey-green mosi, moss, (top) is like a cushion; almost white Reindeer lichen (left) branches into delicate twigs; and the red low-growing plants (centre) are berry bushes. Icelandic sheep browse on these all summer, flavoring their meat.

The sun reappears at Pingvallatn Lake and illuminates the mountainsides in the burnt oranges of autumn — just in time to visit the birthplace of Iceland, the nation. 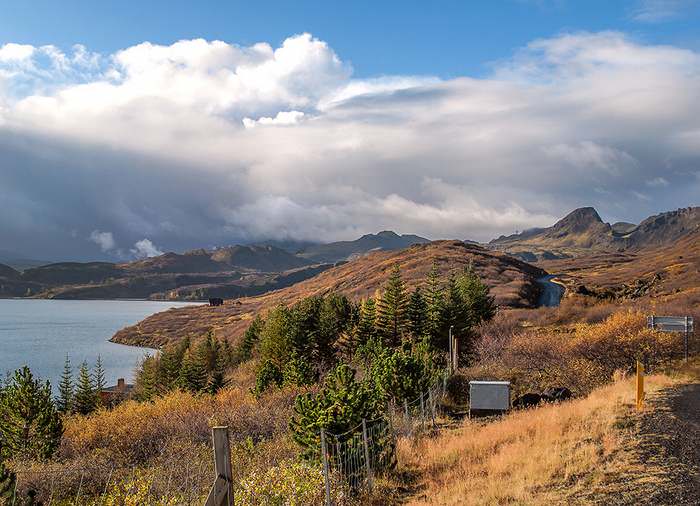 Iceland’s fast-changing weather and late fall colors make for dramatic photos. We stopped by the huge, volcanic Pingvallatn Lake and looked back at the route we had just driven.

Pingvellir is a UNESCO World Heritage Site and a national park that lies astride the Mid-Atlantic Ridge where the North American and Eurasian plates are grinding apart at the rate of 230 feet (70 m) every ten thousand years. In summer the park is overrun with locals and tourists, but today I enjoy it with a few. 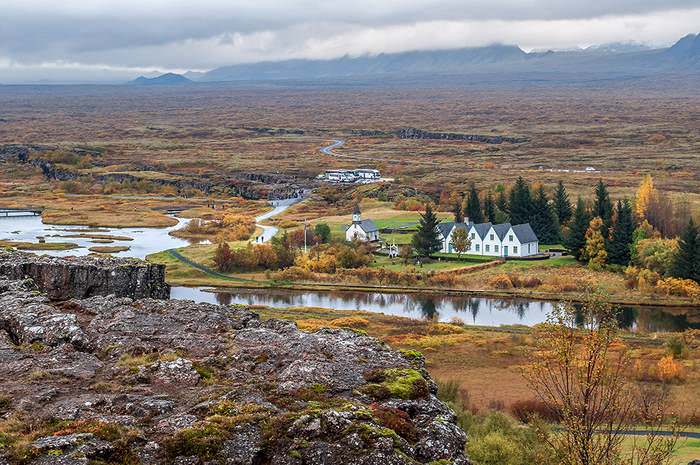 The wide and flat rift valley at Pingvellir, north of the lake, is riven by deep fissures running north-south. The first church was consecrated here in 1000CE and the present church was built in 1859.

For Icelanders Pingvellir is a national shrine, the home of the world’s oldest, still-functioning parliament. An assembly of settlers came here in 930CE and formed Iceland’s first government, Althingi, and later its highest court. Baldvin says, “In 999CE on this spot, every resident converted to Christianity. Today we are Lutherans.” 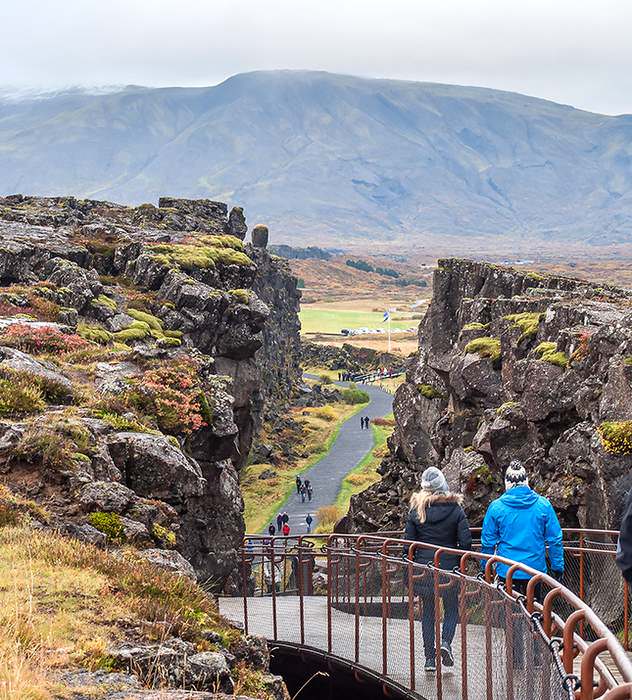 Beyond the rock cleft at Pingvellir lie fields known as the “Parliament Plains” where Icelanders assembled every June until 1799. Today the parliament meets in Reykjavik.

On to Geysir, a geothermal field where signs warn visitors that the water is 194F (90C) and the nearest hospital is thirty-nine miles away (62 kms)! By now the sun is blinding but the Arctic wind nips my ears and fingers. I put up with it so I can photograph Strokkur, which blasts ninety feet of steam to the blue sky every five minutes. 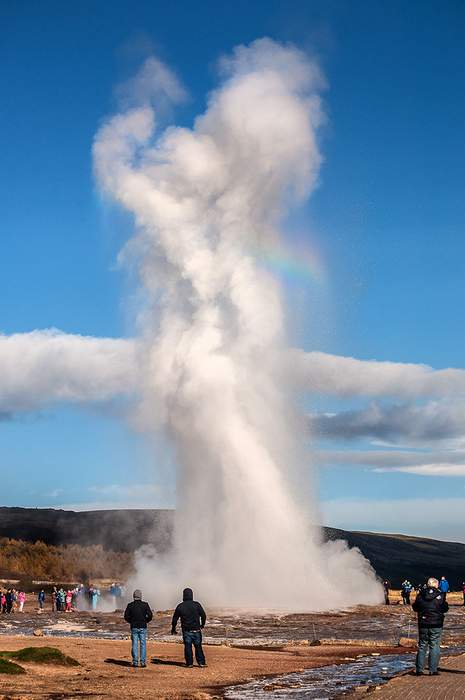 Although Geysir is a commercialized tourist spot, I eat an excellent lunch in one of two restaurants — one is fast food but the other serves hearty Icelandic dishes. The excellent gift shop tempts me into buying an Icelandic wool sweater.

The afternoon brings waterfalls, big and small, including the massive Gullfoss, country roads alongside prosperous farms, and distant views of Langjökull, one of Iceland’s glaciers. 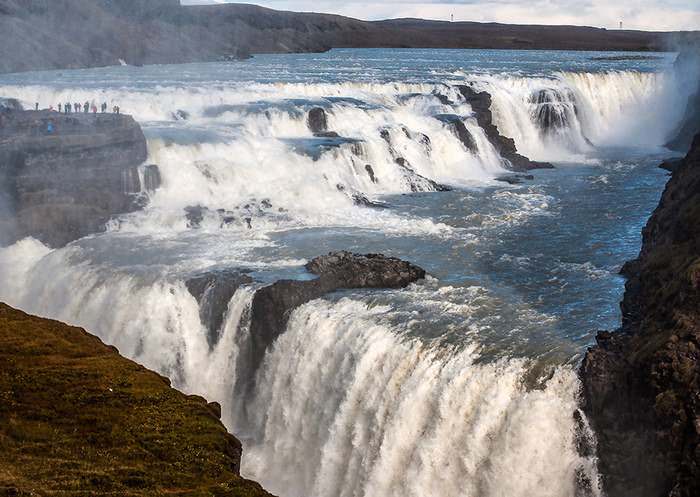 Gullfoss or Golden waterfall on the Hvita River drops 105 feet (32m) in two thunderous falls into a deep gorge. It is fed by Iceland’s second largest glacier, Langjökull.

After a rest day, I set off to the South Shore of Iceland with Reykjavik Excursions in a huge coach with over seventy passengers aboard — it’s the only tour I take that’s not in a mini-bus. Of course, showers start my day as we barrel east along Highway 1, Iceland’s ring road, but the sun obliges at the first stop.

I stand in front of the volcano that halted European air traffic in 2010. Today Eyjafjallajökull looks benign, partly hidden by clouds, but the posters show me the devastating eruption. 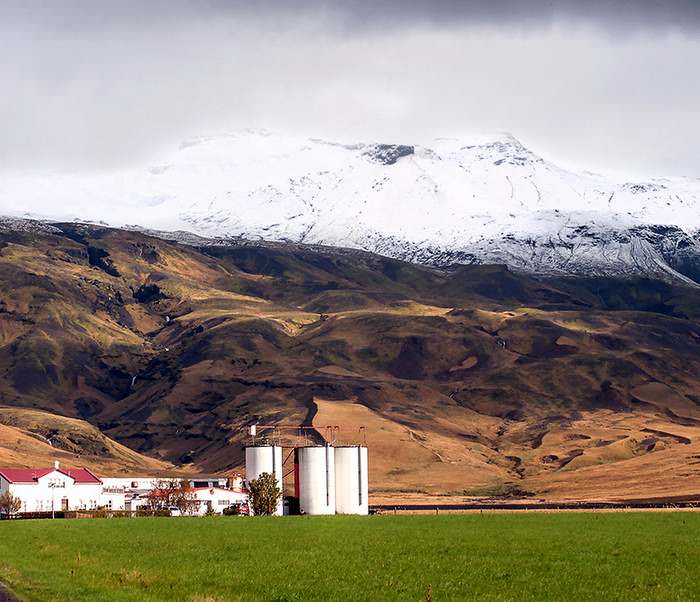 The restless volcano, Eyjafjallajökull, on Iceland’s south shore deposited six inches (15cms) of ash on the farm and the sheep in the fields.

Our guide explains, “People can be evacuated quickly, but over two hundred sheep presented difficulties. Many did not survive despite our rescue services’ heroic efforts.” The bus is quiet as we drive away.

I’ve seen glaciers at a distance, but today I experience my first up close. Near the coast, Myrdalsjökull is Iceland’s fourth largest and buries an active volcano, Katla, beneath the icecap. 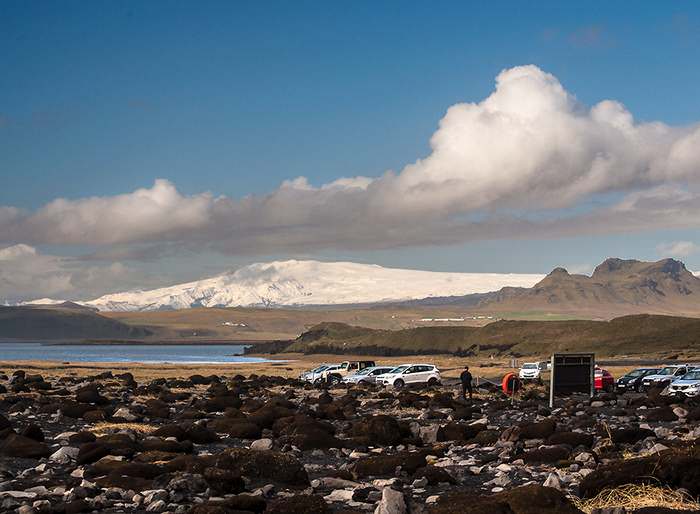 The icecap of Myrdalsjökull, Iceland’s fourth largest glacier, as seen from the shore near Vik. Katla, an active volcano rumbles continuously beneath the ice. Several glacial snouts radiate from the main glacier.

We stop at the tongue of one of its outlet glaciers, Solheimajökull. I trek to its snout, past piles of black gravel and rocks, all evidence of its 2,910 foot (887m) retreat since 1995, after a growth spurt lasting twenty-five years. The lagoon is filled with small icebergs dirty with black ash, which disappoint — I had expected clean, blue ice. The snout towers over me, breathing cold air as if a fridge door has opened. It’s criss-crossed with black veins, crevasses, and lumps of lava. I wonder what happens here when the volcano rumbles. “Huge outburst floods,” says our guide. “That’s why the coastal plain below here has no farms and houses.”

I trek to the snout of one outlet glacier, Solheimajökull, at the south end of Myrdalsjökull, while more athletic tourists opt for a guided hike on the ice itself.

Another highlight is Reynisfjara, a beach near Vik overlooking sea stacks, pinnacles, arches, and other rock formations. Here the wild North Atlantic grinds the black lava into sand.

The black sand beach and rock formations at Reynisfjara are the most popular and photogenic stops on the South Shore tour.

Behind me, cliffs of basalt columns soar and caves gape. I never want to leave this sunny photo op but I’m hungry for lunch — the national dish, a filling lamb stew, beckons in Vik. 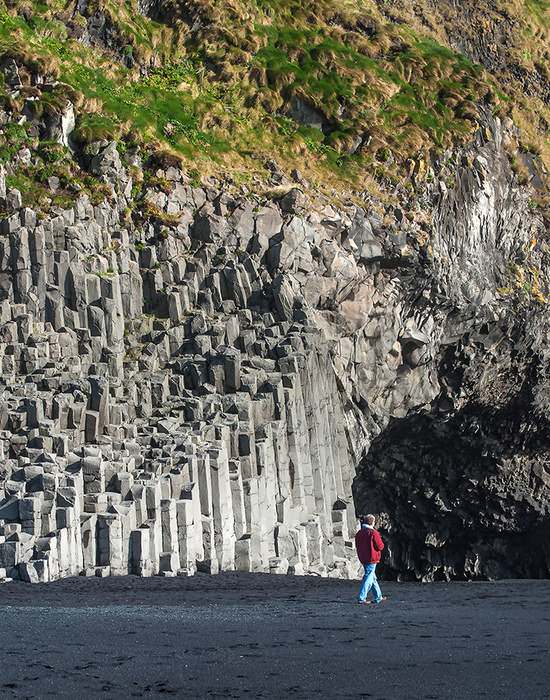 Behind the beach cliffs of hexagonal basalt columns soar overhead and caves penetrate the cliffs at sea level. They were formed from slow-cooling lava.

Vik is the furthest east we go and on the return journey we visit Skógafoss and Seljalandsfoss, where visitors can walk under the latter waterfall and get drenched. I stick to photography. 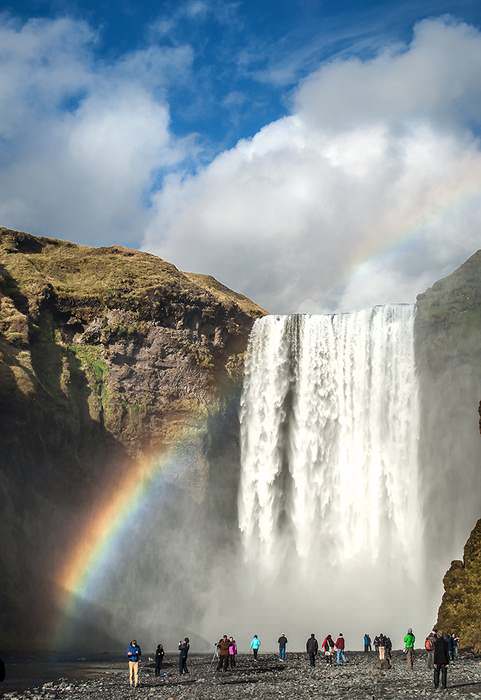 Skógafoss drops 200 feet (60m) off a vertical cliff next door to the folk and transportation museums where I explored for over an hour.

Next door to Skógafoss is a folk museum, fascinating but overfull, and a modern Museum of Transportation of little interest to me. I head for the restored Icelandic turf houses that I’d seen in the north at Laufas but had not been inside. Icelanders have built these for centuries to counter the harsh winter climate. The living quarters are cosy and linked to storerooms and workrooms. 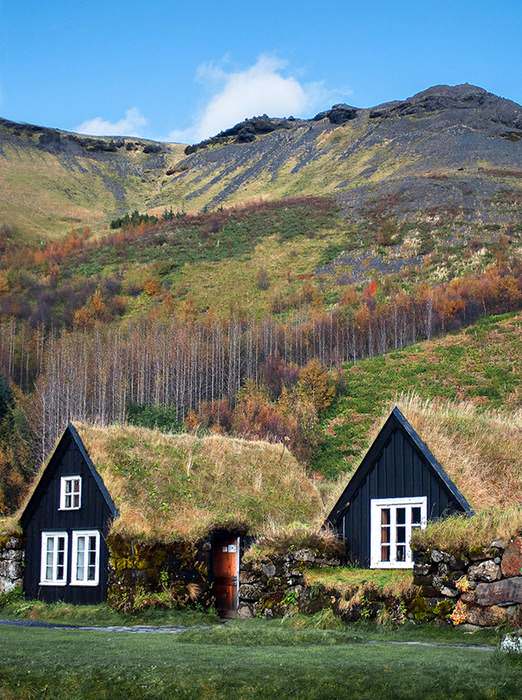 The turf houses of Iceland were the answer for survival in a harsh climate. With no timber, settlers built them with rocks and turf and often backed them deep into hillsides. The remaining few, built in the late-1800s, were occupied till the 1950s and ‘60s

During the long drive back to Reykjavik, I replay the tours I’ve taken in Iceland. The big coaches run on tight, unwavering schedules, with little chance to interact with the guide. The small group tours in mini-buses allow spur-of-the-moment stops for photography and detours, flexibility in timing, and discussions with the guide. Most importantly, the mini-buses can go where coaches cannot. I conclude Iceland’s small-group tours are worth the higher price for the rich experiences they offer. Back at my hotel, it’s raining again.

The author is grateful to Promote Iceland, GeoIceland, and Reykjavik Excursions for making her explorations of Southern Iceland possible. 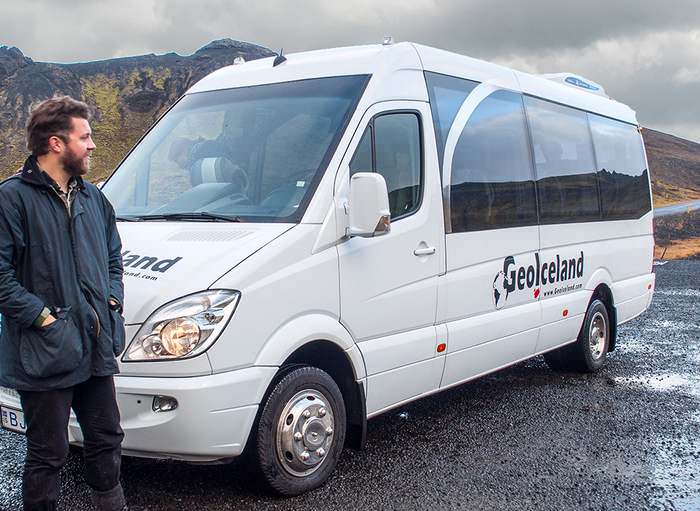 Written by Julie H. Ferguson and © Photos by Pharos for EuropeUpClose.com

Thank you so much, Aijika, for your comments. I hope you get to visit ICeland.

You make me happy for this photos. You have a incredible Great skill in photography , all angle are awesome! me, i want to improve my skills to photography.. and i will wait for your next adventure. Thanks. ;) You inspired mo to do my desire. :D

Thank you so much, Carol. I can't tell you how much I enjoyed Iceland and her residents. It's a great stop-over on the way to Europe's hubs via IcelandAir from YVR — it's a great airline and has generous policies for flyers. On the same ticket, I stayed over for 11 days.

You captured some great photos, Julie. Looks like a wonderful place to visit.