From the first time I saw a picture of the Centre Georges Pompidou in my 6th grade French class, I knew this was a place I absolutely had to visit someday. While my classmates did their cultural projects on the Eiffel Tower and the Arch de Triomph, I fixated on the tubular escalator on the outside of this, to my 6th grade mind, completely radical piece of architecture. Needless to say, as soon as I had a free moment during my first stint in Paris, I made a beeline for Beaubourg. As I approached it’s angular façade, I scoped out the entrance for the escalator that had enchanted me as a child and headed in to this wonderland of modern art. 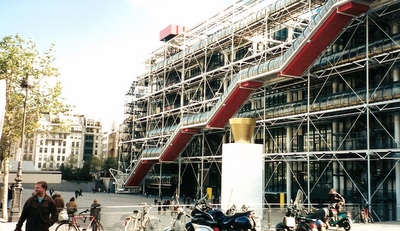 The Centre national d’art et de culture Georges Pompidou was the pet project of President Georges Pompidou, who, during his tenure, sought to build a new cultural center in the heart of Paris, one that was completely focused on modern and contemporary art in all its forms. His dream was realized when the Pompidou opened its doors in 1977. Since then, this innovative institution has served as a showcase and workspace for visual artists, musicians, playwrights, novelists, spoken word artists, art theorists and choreographers, all pursuing cutting edge projects in their fields. It continues to be an interdisciplinary arts center par excellence. 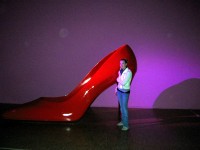 Located in Paris’ Beaubourg quartier, the Centre Pompidou was designed by architects Renzo Piano (Italian), Gianfranco Franchini (Italian) and Richard Rogers (British). As a result of it’s intensely modern aesthetic, “Beaubourg” (as the center came to be known during its construction) was the subject of much controversy; many French critics believed it to be an eyesore. However, it was so popular when it opened in 1977 that the interior of the building suffered from wear and had to undergo renovations from 1997 to December 1999. When it reopened to the public on New Year’s Day, 2000, the museum space had been expanded and the reception areas were made even more modern and state of the art. Today, close to 6 million visitors come to the Centre Pompidou’s doors each year, for a total of over 200 million visitors since it first opened its doors.

The Centre Pompidou houses the most prestigious and diverse collection of modern and contemporary art in Europe, as well as a large public reference library, cinema and performance halls, a music research institute, educational activity areas, bookshops, a restaurant and a café. For a fabulous panoramic view of Paris and a satisfying meal, I recommend visiting Restaurant Georges on Level 6 of the Centre. Be sure call or fax to book a table before your visit :
Telephone: +33 (0)1 44 78 47 99
Fax: +33 (0)1 44 78 48 93