Copenhagen has more than 50 museums, classic to kitsch, erotica to fairy tales, and not a one of them is stuffy or boring. Some have free entrance and others are free on certain days. The Copenhagen Card provides discounts on transportation and entrance fees, but it’s a good value only if you are constantly on the go.

The largest museum in Denmark, the Royal Museum of Fine Arts, has a wealth of paintings and sculpture from centuries past to modern times. Its walls hold a grand array of the greats — Rubens, Rembrandt, Matisse, Picasso and many more. There’s a children’s section with workshops where kids can paint and draw, and the museum has a cafe.

Find more Western art — 700 years’ worth — in The National Gallery. International paintings, sculptures, and drawings are all on display. The museum cafe, which has a view of the park and lake, serves breakfast, brunch and lunch with Danish favorites such as maple syrup on pan-fried rice pudding cakes and curried herring with onions. If you’re not that adventurous, there are numerous other choices, such as a BLT or grilled tuna with pumpkin seeds.

Another art museum, New Carlsborg Glypotek, displays a fabulous collection of modern and antique art. The French masterpieces and sculptures from Egypt, Greece and Rome make this museum near the Tivoli a must. There’s a nice cafe in the museum’s Winter Garden, where you can enjoy coffee and pastries by the palm trees.

The National Museum, in a former palace, is a historian’s dream, with its amazing collection of artifacts: prehistoric runic stones, a room with nothing but gold objects, medieval art, an exact replica of a Viking ship, and more. In the Children’s Museum, kids can try on old-time dresses and sailor suits, and even typical Viking wear.

Other places to take the youngsters are The Four Top Attractions in Copenhagen: The Mystic Exploratorie, Guinness World Records, Ripley’s Believe It of Not, and Hans Christian Andersen’s Wonderful World. I can’t personally vouch for them, but what child wouldn’t love to see the Metal-Eating Man (18 bicycles!), a shrunken head, and Thumbelina? Copenhagen also has a Toy Museum and a Circus Museum.

You won’t be taking the kids to this one: Museum Erotica, which shows the history of human sex in photos, videos, drawings, and sculptures. The original Carlsberg Brewery is another adult attraction (children are allowed in, but can’t sample the beer that is included).

Traditional musical instruments from Europe, Asia, and Africa are on display at the Museum of Musical Instruments, housed in three restored buildings from the 18th century. Sometimes musical performances are held in the museum. At Rosenborg Castle, you can glimpse royal Danish culture from the 16th to 19th centuries. The castle is furnished in elegant style and showcases the crown jewels.

For a sobering reminder of more recent history, go to Frihedsmuseet, the Museum of Danish Resistance 1940-45. During World War II the Danes showed strength and courage under Nazi occupation, and it’s documented here. You’ll leave with even more admiration for Denmark’s spirit.

One of Copenhagen’s newest additions is the expanded Arken Museum of Modern Art. The huge white concrete and steel building, in a city suburb, has 5,000 square meters of galleries showing contemporary artworks. To step back in time and see how Danes lived from 1650 to 1950, get out of town to the Open-Air Museum. Its 50 farms, mills and thatch-roofed houses, on 86 acres of rolling grounds, show a way of life long gone but fondly remembered.

North of Copenhagen is the world-famous Louisiana Museum of Modern Art. Bring a picnic and give this place plenty of time; it is fabulous. Set on the coast above the sound, it has gardens, pavilions and galleries with some 3,000 works of art. Sculptures by Giacometti, Moore and Calder, paintings by Picasso, Warhol, and Lichtenstein are here with hundreds of others. 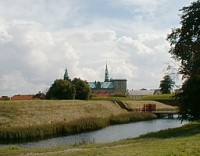 There’s a wonderful combination of fact and fiction about 50 kilometers north of Copenhagen, by the narrowest strait between Denmark and Sweden. Kronborg Castle, in Elsinore (Helsingør), is where Shakespeare set his play, Hamlet, and tourists sometimes ask to see Hamlet’s bedroom. You won’t find evidence of an actual Hamlet, but the Renaissance castle, now a UNESCO World Heritage Site north of Copenhagen, is open for tours and is steeped in history. It’s been a fortress (at one point the strongest in Europe), a port office, a prison for slaves, a cage for a queen, and military headquarters. Hamlet has been performed in the castle a number of times, with Laurence Olivier, John Gielgud, and Derek Jacobi each playing the lead. I would love to have seen any one of those.

I am seeking information about a early toy company in Denmark. I have a childs wood body pedal car made by Danbors of Copenhagen. I believe the car was made in the early 1930-1940's. I would appreciate any information anyone can provide me. I live in the state of Michigan, USA.