“To visit Morocco is still like turning the pages of some illuminated Persian manuscript all embroidered with bright shapes and subtle lines,” Edith Wharton wrote in 1927, and it holds true today.  That rich embroidery of life and color is most intense, if not overwhelming, in Marrakech, just north of the High Atlas Mountains. 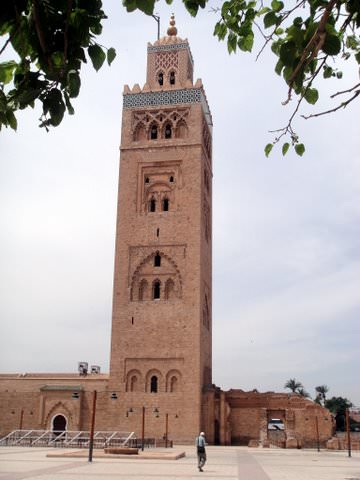 The symbol of Morocco’s third-largest city is the 800-year-old Koutoubia Mosque, on Avenue Mohammed V.  Its minaret, with elegantly curved windows, filigreed arches, and copper spheres, is visible throughout most of Marrakech. (Non-Muslim visitors aren’t allowed to enter.)

The Palais d’el-Badia would be another glorious piece of Marrakech embroidery if it weren’t in ruins. Still, it’s worth a visit to get a hint of magnificence. Built by Moulay Ahmed el-Mansour in the 16th century, the palace had 360 rooms fabulously decorated with marble, mosaics, gold leaf, and carvings. A hundred years later, another jealous sultan destroyed it.   Both rulers would have a hard time believing their eyes today. The palace ruin is the site of a popular folklore festival, held every June.

Marrakech is not always easy for travelers. There are scams and cat callers that can put you off. But at the end of the day, all the wonders make more than up for it.

Jemaa el-Fna and the Souks 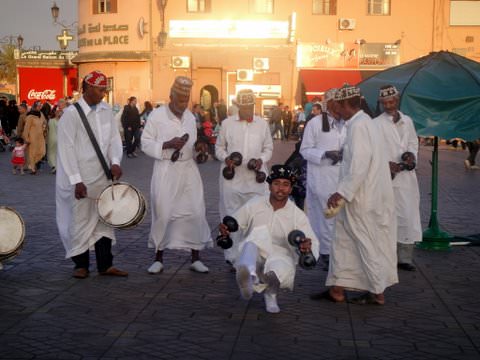 Palaces, massive medieval walls, hundreds of arts and crafts, the famous tanneries, and the Saadian tombs are all part of the city’s exotic pattern. But the place that most enthralls every visitor is Jemaa el-Fna, the huge central square. It’s a chaotic, fascinating swirl of tourists, motorbikes, juice stands, cafes, acrobats, musicians, and sellers of snails, olives, and henna tattoos. In the evenings, dozens of food stalls set up, grilling meats that plume thick clouds of smoke. To say it’s festive is an understatement. We were careful, though, after being warned about food from stalls on the square—a guide cautioned, “Eat only what you see cooked before your eyes.” 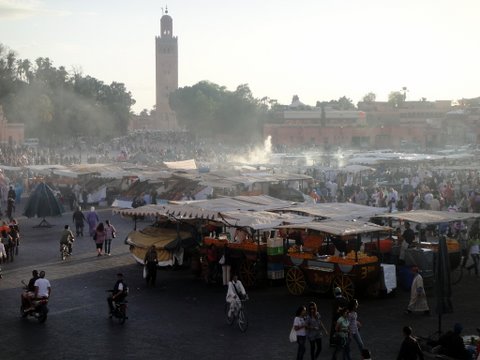 The narrow lanes winding away from Jemaa el-Fna lead to the souks, tiny shops with piles of spices and olives, aromatic herbs, ceramic tiles, carved furniture, skinned lambs, t-shirts, leather belts, hand-pounded copperware and much more. If there’s an open space, someone spreads a tarp and displays a few tennis shoes, souvenir keychains, or plastic toys for sale. In this bewildering array, surrounded by crowds and din, you have to watch out for laden donkeys and sputtering motorbikes. This was our neighborhood.

Every day we’d walk by merchants who called 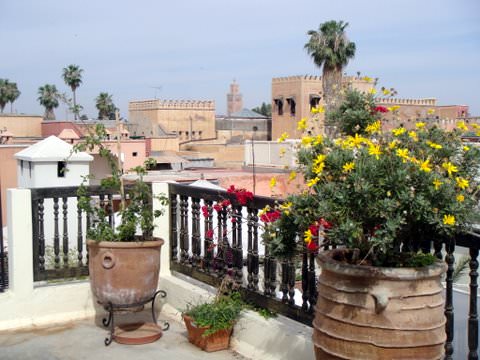 cheery greetings (as well as, “Come in my shop! Good price for you!”)  Our hotel, Riad Diana, was a former mansion on a silent, shadowed street apart from the souks.  Our room, above an inner courtyard with palms and a tiny pool, had a king-size bed, a corner fireplace, and a large bathroom. The staff treated us like family. (Yes, we could store our yogurt in the fridge, yes it was fine to have breakfast on the roof terrace.) The Diana is one of many riads; some are much more luxurious and expensive, but this simple, casual place had everything we needed.

Our favorite restaurant in the neighborhood was Jardin Dar Mamoun, where we sat in the pretty central courtyard of an 18th century palace and dined well for a reasonable price. Nearby, the pricier Dar es-Salaam is beautifully appointed and well-known—part of the Alfred Hitchcock film, 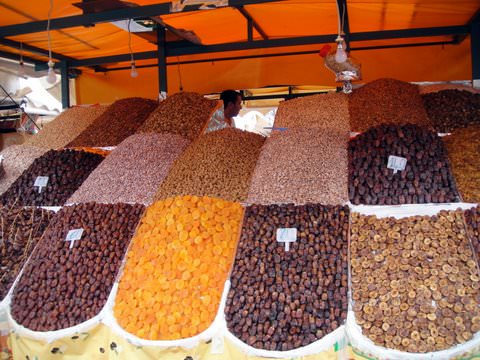 The Man Who Knew Too Much, was filmed here.

Another restaurant we liked was Rotisserie de la Paix, not in the medina but the Villa Nouvelle, the newer part of the city. There we ate outdoors under trees with colored lights. Fountains played and peacocks and geese strolled through the garden, a lovely oasis in a busy area. In Marrakech you never know what may lie behind the walls. Often it’s an enchanting surprise, one of many threads in this rich embroidery.