Overlooked by most tourists, Samos is a small, lush island only a few miles off the Turkish coast, soothed by the warm lap of the Aegean sea. Most people reach Samos via ferry from Turkey. Boats depart daily from the busy port of Kusadasi, bringing day-trippers onto the boardwalk in Samos town, also known as Vathy. 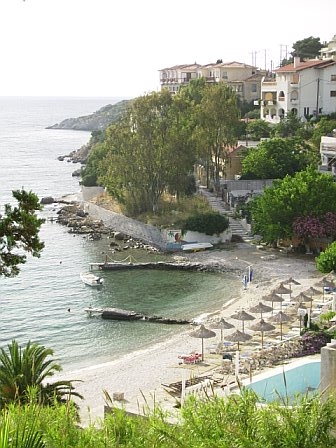 For a few hot hours, tourists throng the cafes: German couples fanning themselves or young Greeks arguing over iced coffee. Most of these groups enjoy dinner and a stroll on the boardwalk, then depart back to Turkey before dark. It is in the evening, when Samos empties, that the island reveals its quiet, idyllic character.

We watched sunset over the calm, gray-blue sea while white-hulled fishing boats idled offshore. Vathy is built at the inlet of a large bay, with forests rising up on all sides, and white and blue homes running steeply up to the base of the hills. That evening, we enjoyed Greek dolmas (grape leaves stuffed with fragrant rice) and a glass of Samos’ famous sweet red wine.

Beaches are easily reachable by public bus from Vathy. The village of Kokkari, only 10km from Vathy, has become a popular windsurfing destination, and offers access to several beaches.  On the Western side of the island, Potámi beach draws tourists and locals alike from Karlovassi, a large nearby town. The Western coast is generally considered the most unspoiled, but intrepid beach-hunters can find pebbled, palm-fringed beaches all along Samos’ coastline. 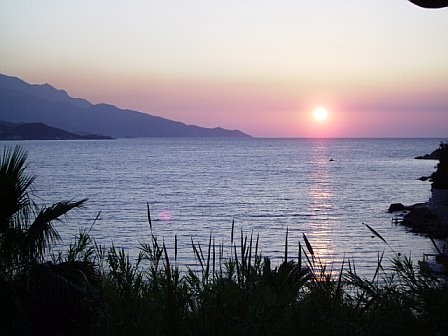 Sunset on the isle of Samos

A highway winds around the island with spectacular views of the sea, and many tourists rent motorcycles to tour the island. In the bay at Pythagorio, the birthplace of mathematician Pythagoras, boats dock in the swaying blue bay. Built on an ancient city, Pythagorio now serves as Samos’ major tourist destination and the site of several archeological sites. A 19th century castle overlooks the bay, and a monastery, restored with a lack of artistic vision, sits on the shady hills above Pythagorio. Sadly, the nearby ruin of Ireon, the mythical birthplace of Hera, looks fairly unimpressive, though it once ranked as a major sanctuary. The best place to learn about the ancient history of this area is in the Samos Archeological Museum in Vathy (open Tues-Sun, 3 euro). 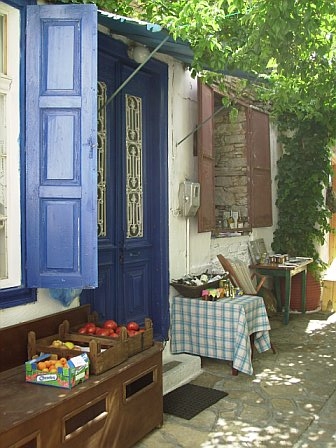 The town of Monolates hides itself far up in the Samian hills. This artistic community is a haven for craftspeople who sell glazed pottery, woven products, metalwork, and paintings out of their workshops. Most tourists hire taxis to Monolates; for the more adventurous, a walking trail rises 3,000 feet from the beach through forest, vineyard, and olive groves.

Monolates looks like the Greece of the movies, with narrow, winding streets and white-washed homes. In a courtyard covered with trellises of grapevines, we ate fava beans, spiced olives, tea made from Samos’ mountain herbs, and yogurt with fresh honey. Our lunch came with a price: it made us miss the last bus back to Vathy. But on Samos, the pace of life is slow and easy, so we decided to act like locals, and ordered another tea.

Great article, thanks for sharing your information on Samos

I will defiantly visit on my next trip to Greece.