“A York! A York!” yells the Yorks banner bearer, as he works the excited crowd up into a lather. The Battle of Tewkesbury is about to begin and a crowd several thousand strong has assembled along one side of the expansive green field to witness 2,000 men-at-arms having at each other. It’s a splendid sight; hundreds of foot soldiers armed with long wooden pikes and gleaming swords, dressed in a bewildering array of colors and shining armor, standing loosely assembled on a huge field. Facing off across the field, they hurl epithets and threats at each other, “Behead the Lancastrians”, “Restore our King”, in broad English accents. 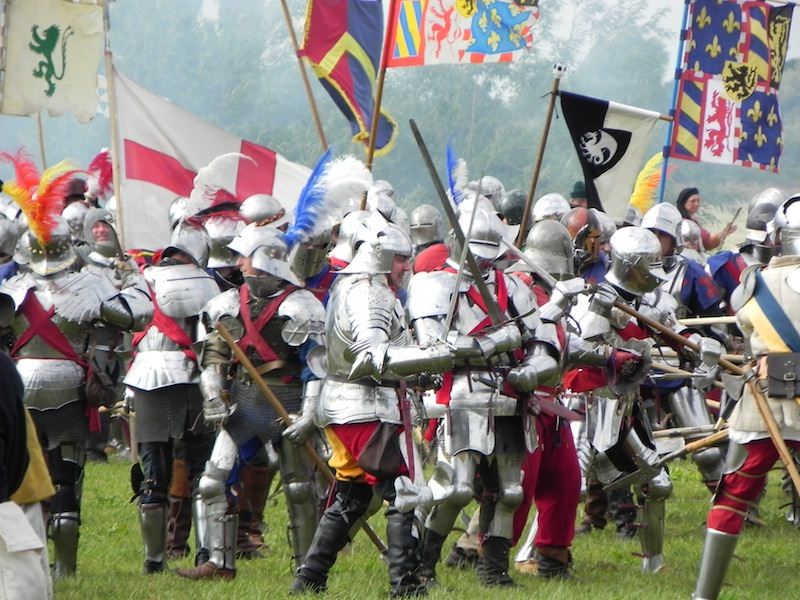 These soldiers are massing on the battlefield before their confrontation with the royalists.

Moments later a deep throated roar rises from the soldiers and they run full tilt at each other, meeting in the middle of the field in a loud rending crash of metal and wood. Swords rise and fall, glinting in the sunshine, and soldiers fall dead on the grass. This would be very scary if it was real.

I’m watching a re-enactment of the Battle of Tewkesbury, the final battle in the Wars of the Roses, between the houses of York and Lancaster. The battle is the centerpiece event of the annual Tewkesbury Medieval Festival, and I’ve been most impressed at its authenticity so far. The participants strive to preserve history at the festival, from medieval costumes to rustic language. 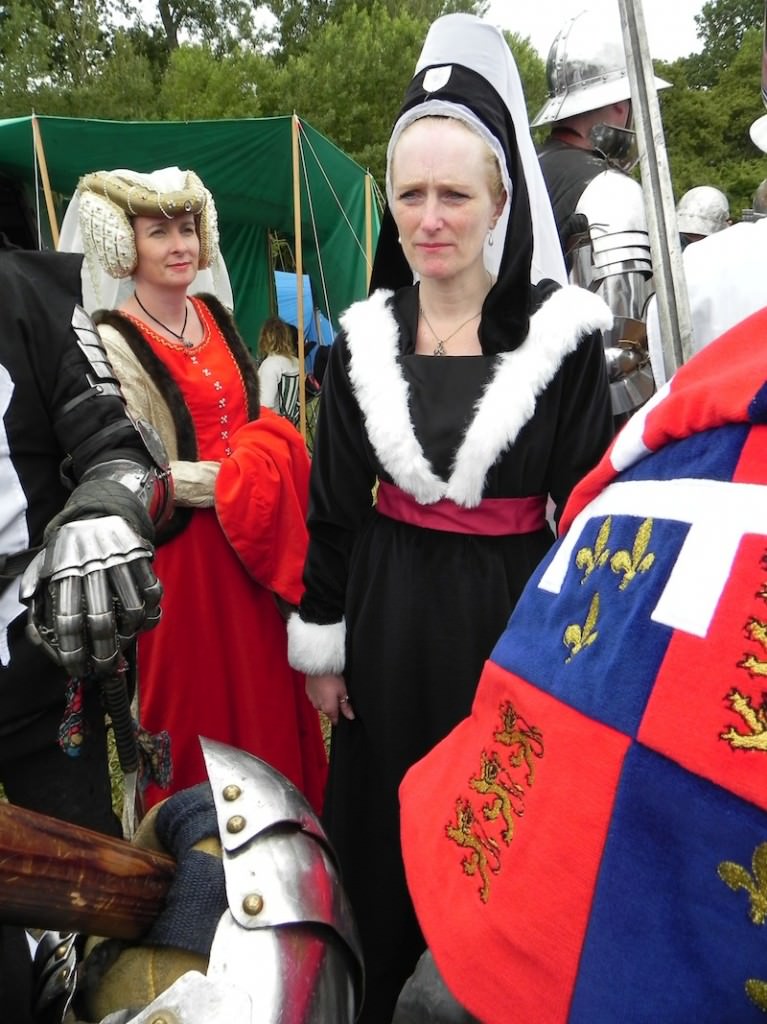 This fair maiden is looking for her husband to wish him well in the upcoming battle.

Shortly after entering the field I walk into the medieval market, a village where traders sell everything related to ye olden tymes, from armor and weapons to garments and potpourri. I see a gauntlet standing atop a 10-foot high pole. A sign at its base proclaims that, “In ancient English law, the people gathered for the fair have the rite to make rules and laws for good order and fair trading, and to deal with transgressors against the public good any way they see fit”. Best be on good behavior then! 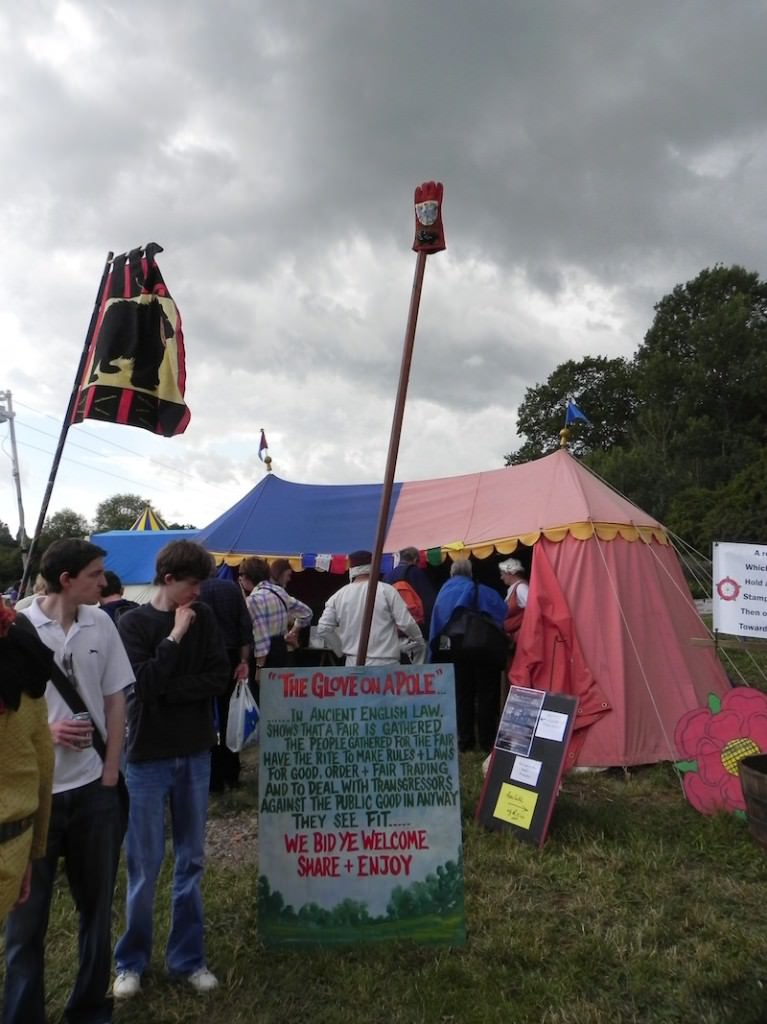 The medieval market at the Tewkesbury Medieval Festival. The glove on the pole shows that people who misbehave will be dealt with by mod law.

I walk around the village, amazed at the large array of goods for sale, and enjoy talking to the costumed living history re-enactors who are clearly having the time of their life, having transported themselves back over 5 centuries in time. I see falconry displays, archery competitions, and chat for a while to Angus Donald, the author of the popular Outlaw Chronicles novels, who tells me that it takes him a year to research each of his historical novels and another year to write them; he’s thrilled that his books are selling well in the U.S. 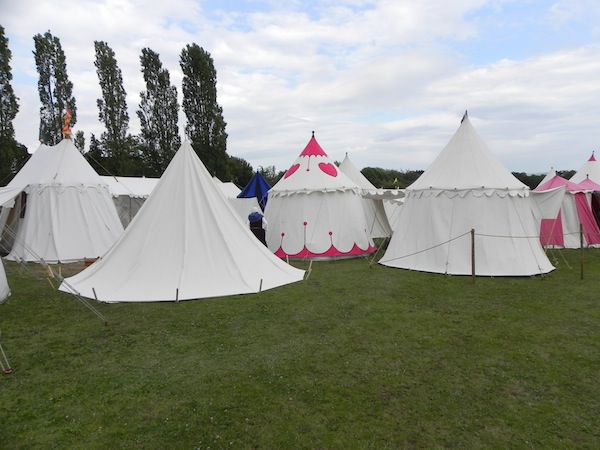 The living history re-enactors camp in this recreated tent village at Tewkesbury, near the battlefield and the medieval market

Then, leather costumed heralds march through the village loudly proclaiming that the battle is about to begin. Beating drums announce the passage of the two armies past the village, heading towards the battlefield. Their rough, unshaven faces are grim, betraying their nervousness at the fact that they might not be alive this time tomorrow. These Englishmen take their re-enactments seriously! The village clears out, becoming a ghost town. Even the vendors shut up shop. 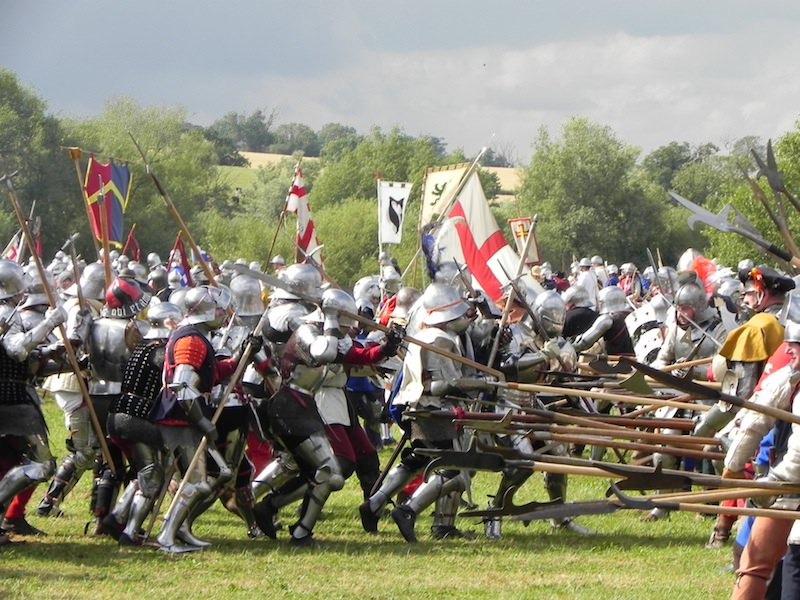 Battle is joined in this splendid recreation of the Battle of Tewkesbury. The re-enactment is held on the same field as the original battle.

As the battle rages on, with move and bloody countermove, the casualties mount up. Finally, a decisive thrust by the Yorkists results in a rout, and most of the heavily outnumbered Lancastrians are killed on the field.

During the real battle on May 4, 1471, many fleeing soldiers drowned in the nearby Severn River, and other Lancastrians sought refuge and asylum in beautiful Tewkesbury Abbey, that looms like a benevolent old stone grandfather only two fields away. Sadly, a number of Yorkists forced their way in, dragged the defenseless Lancastrian soldiers outside, conducted a brief trial, and executed them. As a result of the fighting and spilled blood, the church was closed for three days for cleaning and reconsecration. To this day, on May 4, dirges, masses and remembrances are held for the Lancastrians who died in the battle. 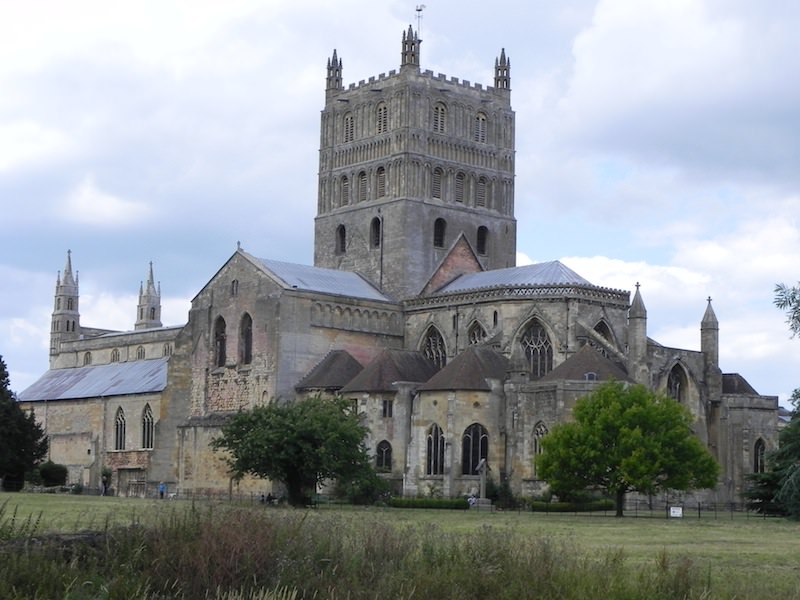 After the Battle of Tewkesbury, many Lancastrian soldiers sought refuge in the Tewkesbury Abbey which still stands today. They were dragged out and executed.

I drop in on the Abbey, which dates back to 1121, while walking back to my car. I stand under the nave trying to imagine what it must have been like when the Yorkists came charging in. I can almost hear the cries of the defeated soldiers, pleading for mercy. 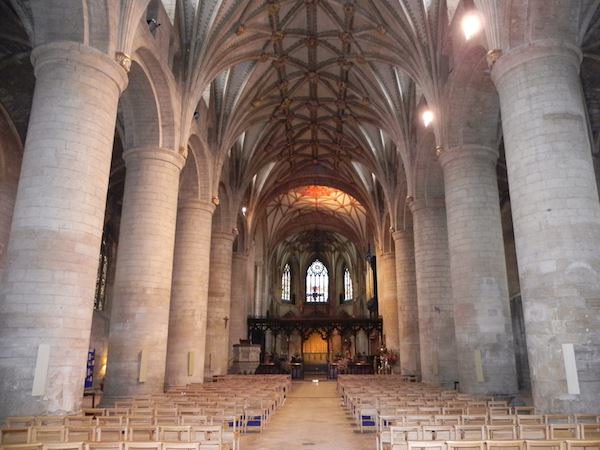 The nave at Tewkesbury Abbey is much the same as it was in the early 1400s.

Later, I walk through the small village of Tewkesbury, with many of its Tudor and medieval buildings still standing on the main streets. It’s well worth visiting. The Tewkesbury Medieval Festival is the largest of its kind in the world, and is a must-see for the medieval fan.