Szeged, Hungary, may be only one-tenth the size of the national capital Budapest, but it more than makes up for that in character. With 170,000 residents, plus a large seasonal student population, this southeastern city is one of Hungary’s main provincial centers.

Much of the local pride centers around food. In a nation strongly attached to its cuisine, Szeged, Hungry happens to excel in producing certain foodstuffs that are Hungarian favorites. It is home to Hungary’s most famous salami company, Pick, and produces some of the country’s finest paprika – a spice made from dried peppers. Perhaps most delicious of all, this city on the Tisza river, is the best place to get Hungarian fish soup (halaszle), made with paprika and big, meaty chunks of carp.

As you walk around the downtown, the prevalence of educational buildings, youthful 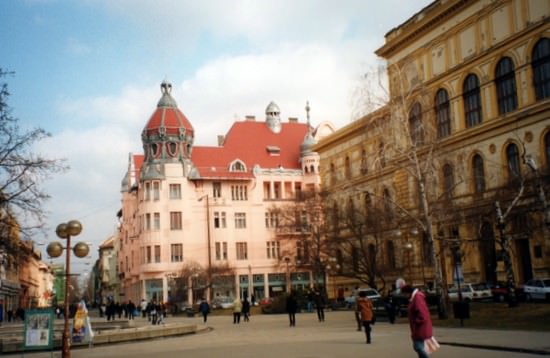 faces and funky garment stores betrays the fact that you are in a major student city. The University of Szeged is a prestigious institution whose more than 10,000 students – and many more alumni – keep up a friendly rivalry with those of Budapest’s ELTE. The main university building presides over Dugonics ter, a wide open space where steps lead down to a big circular fountain at the center. Students often sit on the steps leafing through their books. 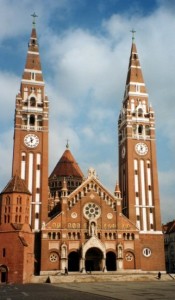 Another major open area in the city center is Dom ter, the square dominated by the red-brick Votive Church, an unmistakable symbol of the city. With two towers, each 300 feet tall, the church was constructed between 1913 and 1930 after the city had been rebuilt in the wake of a devastating flood. Almost the entire city was swept away when the Tisza burst its banks in 1879, and it was during the reconstruction that the city was given its current shape, based around concentric circular roads. Different sections of these roads are named after the capitals of countries that gave financial aid for the reconstruction – including Berlin, Paris, Brussels, London and Moscow.

While on Dom ter, look to the side of the square directly opposite the church and you’ll see a musical clock, dating from 1935. It has wooden figurines of university officials and graduates, which emerge as it chimes each hour. If you happen to visit the square during a particular week each summer, you’ll catch the music performances of the Szeged Open Air Festival, held annually since 1931. 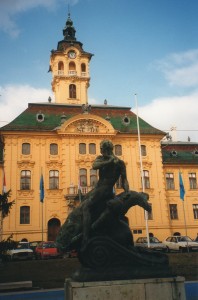 Szeged’s city hall, a neo-Baroque construction from the 19th century, stands on an attractive, tree-shaded square named Szechenyi ter. To its immediate south is the city’s main shopping and promenade area, which centers around another square, Klauzal ter, and a street named Karasz utca. In this area, you can stop for a good coffee and cake at the famous Virag cafe, which offers exterior seating on sunny days. 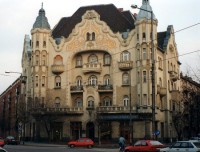 On the other hand, heading north from Szechenyi ter along Takarektar utca leads to Grof Palace, which was built on the instructions of a former attorney general of the city to be a residence for high-ranking professionals and officials. Built between 1912-1913, the three-story Grof Palace, whose sinuous curves are intended to echo Oriental architecture, is a good example of the Secessionist style that reached Hungary from Vienna during the period and became extremely popular.

By the banks of the Tisza stands the huge neo-classical Palace of Popular Culture, which houses the Ferenc Mora museum – a collection of archeological and ethnographic artifacts. The building also contains the city library and is  host to civic events. When entering the building on one occasion, I encountered a chess tournament  that was in full swing, with men and women sitting at tables staring at their checkerboards, oblivious to members of the public peering over their shoulders.

Close to that building, an elegant, arched bridge of white-painted metal leads across the Tisza river to a smaller, eastern section of Szeged. A stretch of the river’s west bank contains the Varkert park. On some summer evenings, tables and benches are set out and hot snacks and beer are sold, making for a simple but pleasant way to spend time admiring the river, bridge and cityscape.

Another nice place to eat, slightly south of the cathedral, is the Godor restaurant, where you can sit either inside or out and sample Hungarian specialties including bean goulash, a variety of stuffed, breaded and fried pork dishes, and of course, a Hungarian fish soup. In reflecting on how substantial the fish soup is, I am reminded that it is listed not in the soup section of the menu, but among the fish main courses.
Tisza Lajos körút 103
6725 Szeged
+ 36 62 420130

Comfortable hotel accomodations in Szeged can be acquired at the Novotel Szeged, located just slightly north from the main city center. A fairly generic four-star establishment, it has large rooms, many with nice balconies.
Maros utca 1
6721 Szeged
+36 62 562200