Tucked into the southeastern corner of Switzerland and separated from the rest of the country by the Rhaetian Alps, the Engadine region is stunningly beautiful. Its quaint villages, meadows full of wildflowers, valleys with gurgling brooks, and high rugged mountains take your breath away. And it’s not just because of the elevation (though that can make you breathless too, at first). Those steep, snow-capped peaks are magical. 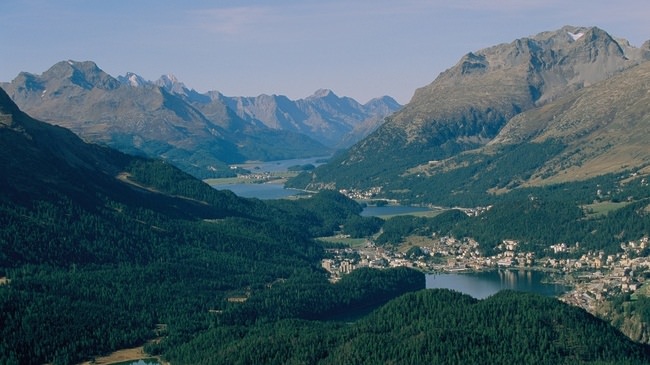 John and I arrived from Italy on the Bernina Express, a memorable train ride. Winding tracks took us up to and through the 7,400-foot Bernina Pass.

Rivers rushed through chasms far below, villages held abundant vegetable gardens, waterfalls streamed, and, above the pine forests, white glaciers gleamed. We left the train in St. Moritz, in the heart of the Engadine. 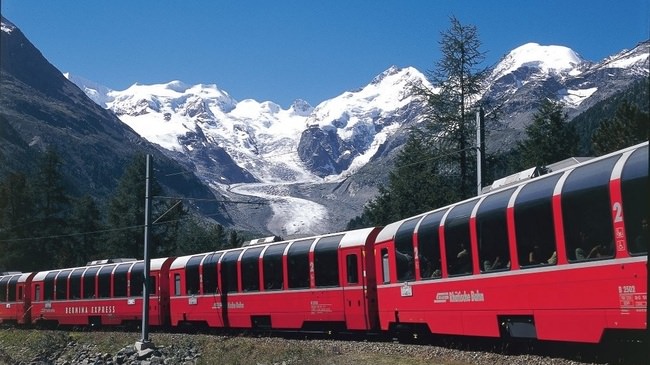 Trendy, chic St. Moritz is known the world over for its great skiing and winter sports, but we visited in late spring. Prices are lower, the atmosphere is quieter, and hiking trails are open. Nights are cool and the air is crisp and clean.

We stayed at 62-room Hotel La Margna. Renovated in 2006, the comfortable, 4-star hotel has a helpful staff and lovely lake and mountain views. We also took a peek at the splendid Badrutt’s Palace Hotel, where the lowest rate was $450 a night. That does include a breakfast buffet and a host of amenities — spa, pool, tennis courts, and 7 restaurants among them.

Not to be missed in St. Moritz is Cafe Hanselmann. The tearoom/cafe, in a building decorated with graffiti (designs scratched on walls to reveal the color beneath; it’s typical of the region) serves fabulous pastries and chocolate. Most in demand are the nüsstorte, made of butter, walnuts and honey, and the delectable pralines. Pastas and schnitzels are on the lunch menu. 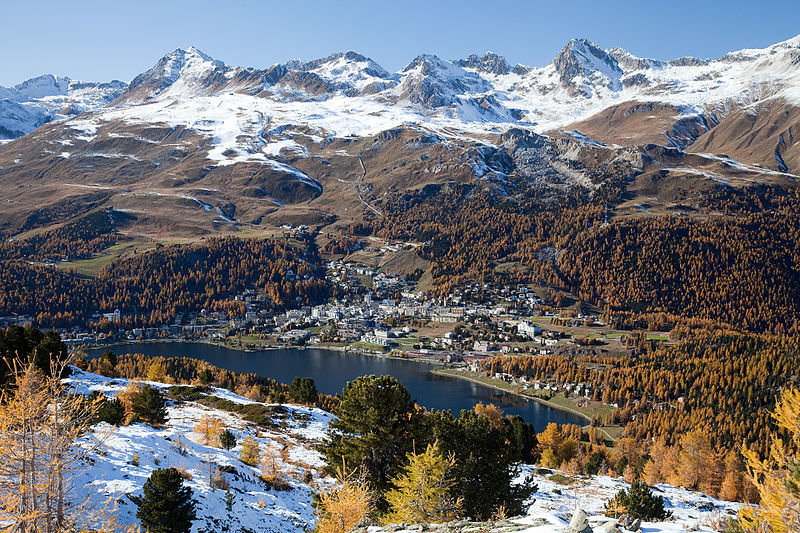 The Engadiner Museum gave us an introduction to the mountain villages, explaining how houses once sheltered families and their animals in mutual warmth. Some have been turned into restaurants serving local specialties, especially fondue and raclette. With the fondue of delicious cheese comes a variety of “dippers” — not only bread cubes, but onions, mushrooms, potatoes, gherkins, garlic, and more.

Next we rode the train to Pontresina , walked up the hill (there’s a bus, too) to the main town and found a map of hiking trails at the tourist information office. Scores of walks in the area take you past — and high above — rushing streams, colorful flowers, and occasional marmots and deer, against a background of jagged mountains.

One of the best walks starts with a funicular ride up to Muottas Muragl, an 8,000-foot peak. There’s a small hotel and restaurant here, the Berghotel Muottas Muragl, offering rosamedanoms with total quiet and spectacular views. The food is said to be excellent. From here, the 3-hour walk leads to Alp Languard, with every curve in the path presenting another postcard scene. A funicular ride takes you back to Pontresina. 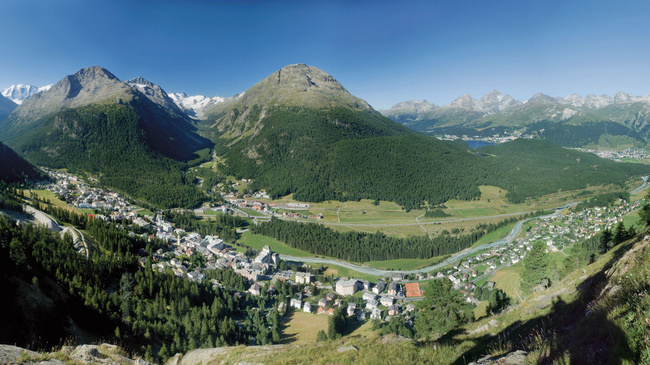 Next time I’ll probably stay in sunny Pontresina, rather than glitzy St. Moritz, to be in a more traditional village with old customs and cultural events. The predominant language is Romansch, but we heard the usual German and Italian too. There’s a 12th-century church with frescoes, the Museum Alpin, and well-preserved houses from the 17th and 18th centuries. At 1,860 meters, Pontresina is in the Upper Engadine’s highest-altitude valley.

Even more traditional is the nearby village of Samedan. We ate lunch in Restaurant Central, set in a 1670 home with arched doorways and ceilings. In rooms where horses, hayracks, and storage sheds were kept, meals are now served to travelers.

We liked the 3-star Hotel Bernina, which has reasonable rates that include a breakfast buffet. The Palazzo Mysanus, built in the 16th century, is now a small hotel with a modern interior.

There is little social scene or shopping and no nightlife on Samedan’s quiet, narrow streets. It’s a place to step back in time, stroll around the church and tower, and enjoy the peace.

Finally, you can’t leave the Engadine without seeing Guarda. This village of 175 people carefully maintains its fascinating old buildings, with their graffiti-decorated façades. The tall stone houses are Switzerland’s most remarkable examples of the art.