As the train rolled into the Chester station, it dawned on me that I knew very little about the northern English town where I’d be spending the next few days. Other than a morning meeting with an editor, my schedule for a long April weekend was empty. With an unseasonably warm English spring in full swing and no friends or responsibilities that needed to be met, the city was all mine to do with what I pleased. Perched on the leafy banks of the River Dee , Chester is one of Northern England’s gems – not necessarily a hidden one but far enough off the tourist map to make stumbling upon it a very nice surprise indeed.

A Few Days in Chester 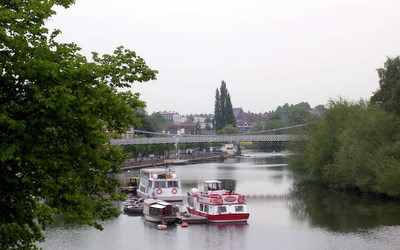 The River Dee in Chester

Standing at the station, I went over what I did know about Chester. Sitting in the middle of the beautiful county of Cheshire, Chester is the backdrop for a very popular teen soap called Hollyoaks that I’d become addicted to while living in the UK. The bustling town is also famous for it’s horse races where women wear large, unsubtle hats that have not been seen in the US for many years. I’d also learned a bit from my friends in Scotland. Stunning architecture, beautiful scenery, 2000 years of history, quaint pubs and restaurants were all in store for me, I was told. So not having booked a room, I shouldered my pack and set off on the short walk to the city center to find accommodation and get settled in. Walking down Brook Street, I decided immediately that I liked Chester. And over the weekend, I grew to love the place. 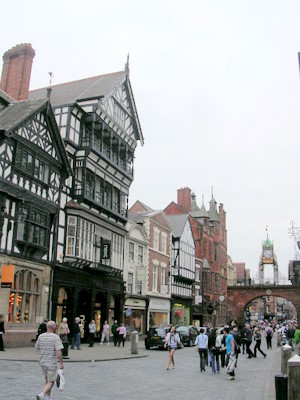 For a traveler, Chester can get lost in the shadows of the two nearby Northern English giants of Liverpool and Manchester. A short train journey under the Mersey and south of Liverpool, Chester is a small place that certainly punches above its weight.  After a quick trip to the tourist office near the Town Hall and the gorgeous Chester Cathedral, I was almost overwhelmed with things to see and do. Within minutes my empty weekend was filled. 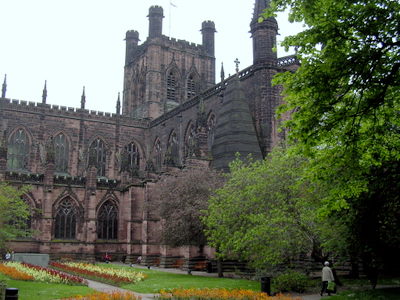 After booking a room at a very affordable B&B in the Handbridge district, I grabbed my tourist map and set off on the 2.2 mile walk around Chester’s ancient Roman Walls that surround the city. I was told by the chap in the tourist office this was the best and most beautiful way to get to know the city. With camera in hand, I walked slackjawed atop the Roman Walls past the town’s most important historical sites, out towards the countryside, along the river and past the famous Chester Racecourse . Sections of the wall run through the town center directly over Eastgate Street and its world famous clock (which the city claims is the second most photographed clock in the world after Big Ben.) Eastgate is chockablock with the gorgeous Tudor houses (known locally as The Rows) for which the city is famous throughout England. History lives and breathes as crowds move in and out of the 400 year old buildings that are now home to shops, pubs and restaurants. 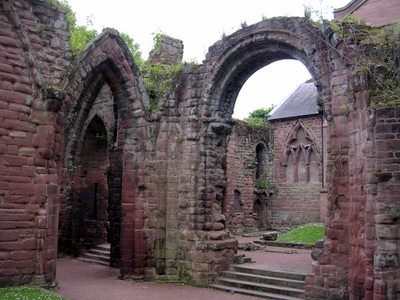 There are historic ruins in Chester

With no shortage of historical sites, some of the best include the aforementioned Roman Walls, the Roman amphitheater, the Chester Cathedral, the Chester Military Museum, the Chester Castle and the outstanding Grosvenor Museum. The museum’s three floors are filled with over 2000 years of artifacts, all housed in a 19th century building. There are two exhibition halls, an art gallery, a period house and displays on Roman Chester and Roman tombstones. In Chester, ancient Rome is never far away and you are likely to see a centurion or two wandering the medieval streets waiting for a tourist with a camera. 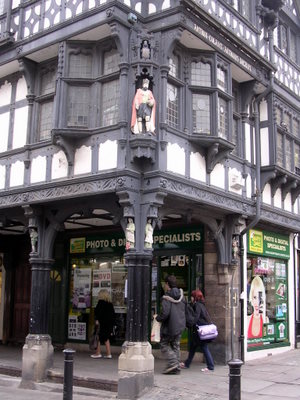 Chester is known for its half-timbered buildings

After a full day of sightseeing, both my feet and camera were knackered. I asked a local if there was a good spot on the river to grab a pint. He told me, in a northern accent, to head to Souters Lane where I found an outdoor table. Sipping on a pint of bitter, I watched the cruise boats roll by while pouring over my library of tourist office pamplets. Over another pint, I decided there were too many  things that simply couldn’t be missed. A Chester Ghost Tour was definitely in the cards and I’d have to spend more time exploring the shops on Eastgate. A Chester Heritage Tour on a replica 1910 London bus was a must if only for the kitsch value of riding in the vehicle. The pamplet on the Chester Zoo was intriguing and I would certainly have to see if the ponies were running at the racecourse. So, with a full slate ahead of me, I decided to head back to my room to get some rest.

But as I started my walk home, I spotted something too good to pass up. A centuries old pub tucked into the ground floor of a Tudor building. “Oh sod it!” I thought. “One more pint certainly can’t hurt.” I suppose I wasn’t ready for the day to end after all. And besides, a sign on the pub door said Mary Queen of Scots stopped here for a drink. It would have been all but impossible for me to pass up looking into that bit of Chester lore.

Chester is a lovely city. I might be a little biased with this being my home at the moment.

Plenty of great places to eat. Joseph and Benjamins is small but fantastic food. I hear they are heading for a Michelin star. So go quickly before they get it. I am sure the prices will go up once they have one.

Harkers is also one of my favourite haunts down by the canal. Great pub, always busy with excellent food.

Be aware though that most of those "Tudor" buildings were built in the 19th Century. Black and white gloss paint was not available in Tudor times. Chester is a very popular city for tourists and shoppers alike. It is also very close to the border with Wales. The Town Hall clock has three faces there is no clock on Wales facing elevation, apparently they wouldn't give the Welsh the time of day! There is even an ancient law that allows residents to kill Welsh people with a bow and arrow if found on the streets after midnight. It is not exploited though as I lived there for five happy years.

LOVELY photos! i really enjoy england - we'll have to visit chester. thanks!