“If Moscow and St Petersburg were sisters, Moscow would be serious and businesslike, compared to this relaxed, light-hearted sibling,” I say with a flourish to my husband Rick. The main street, Nevsky Prospekt, bustles with chattering people strolling arm-in-arm relishing the day. The historic area side-streets with imperial classical architecture in pastels of coral, opal, gold, and aquamarine running along the many canals and rivers are reminiscent of Venice. St Petersburg (renamed Petrograd in 1914, then Leningrad after Lenin’s death in 1924 until 1991) boasts 340 bridges, a dozen of which are raised for a time during the night to allow large vessels access into the city’s inner waterways. We are charmed beyond belief! 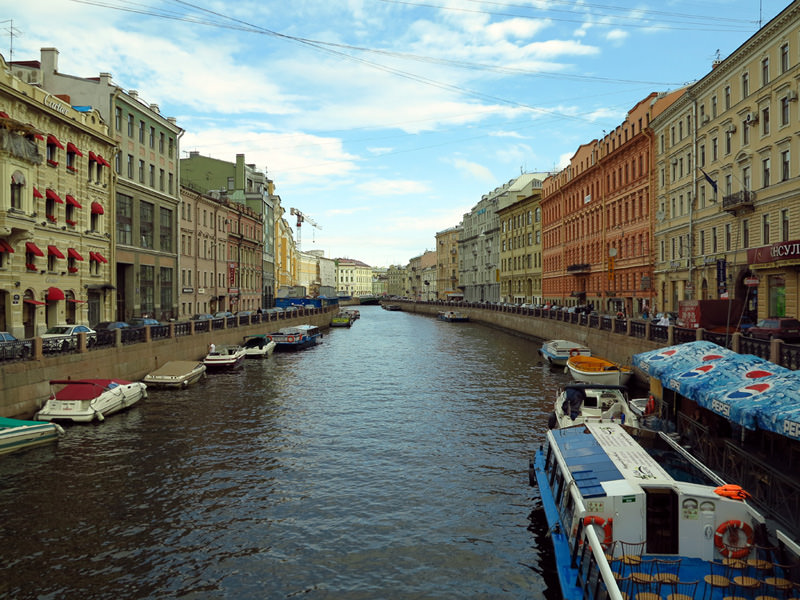 On every walk, we encounter yet another architectural wonder. Kazan Cathedral with it 96 columns and 262 ft-high dome is modeled after St. Peter’s in Rome. During the Patriotic War of 1812, General Kutuzov (Alexander the Great’s right hand man) knelt here imploring the Lady of Kazan for strength to win the war against Napoleon. 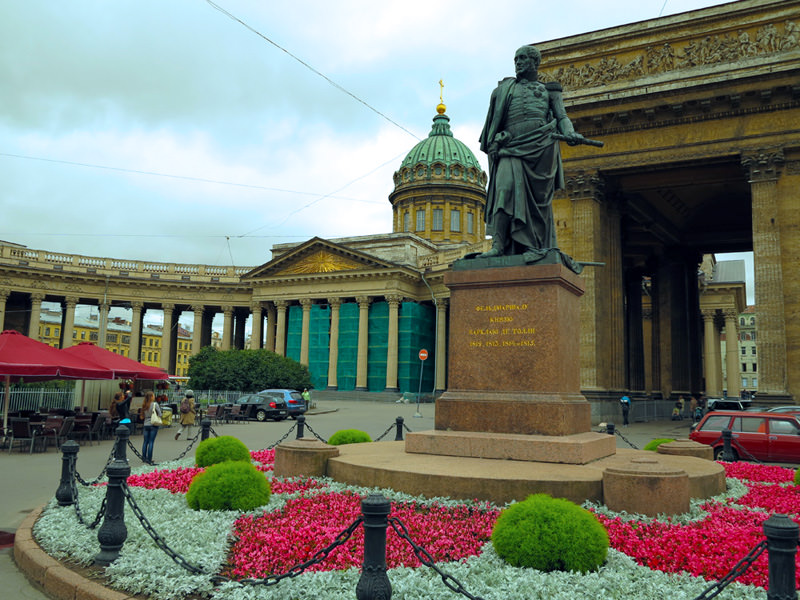 The city’s many spectacular cathedrals are distinctively European in style, with one exception. Moscow-style onion shaped domes grace the Church of the Savior on the Spilt Blood (a.k.a. Church of the Resurrection). The cavernous interior has me expounding, “I have never seen anything like this!”  Rich blue color sets off 7000 square meters of mosaics depicting biblical scenes and saints. The church was built over the spot where Alexander II was blown up by the “People’s Will” terrorist group in 1881, which explains the gruesome name. 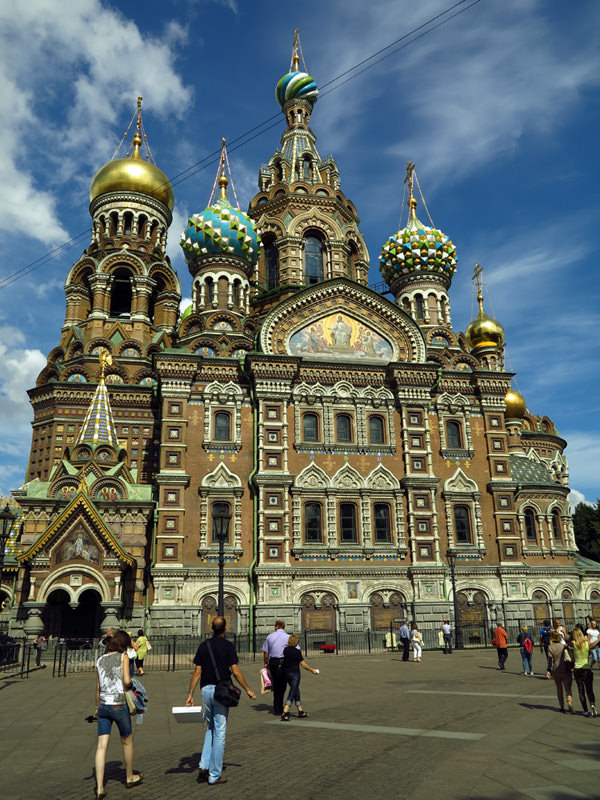 Church of the Savior on Spilt Blood

I have long been intrigued by the Siberian self-proclaimed preacher and healer Grigori Rasputin, and his murder by political big-wigs who feared his growing influence over Tsarina Feodorovna, wife of Tsar Nicholas II, stemming from her belief that  Rasputin could cure son Alexei’s hemophilia. When I heard about tours of the basement room in the Yusupov Palace where Rasputin was done in – I was in! 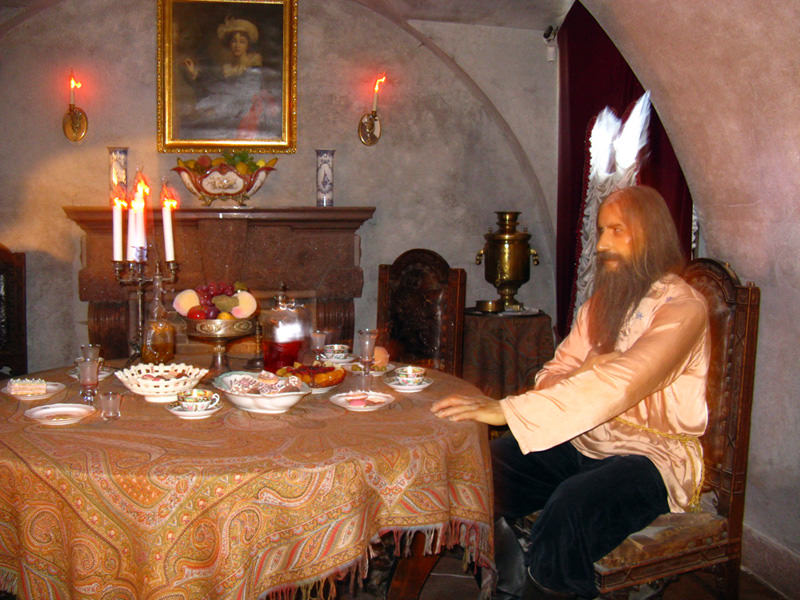 The wild-eyed monk was no doubt honored to be asked to dine with the wealthy Yusupovs. It is eerie to see the wax figure of Rasputin seated at the table drinking poisoned wine, while Felix Yusupov stands with hands gripping the back of a chair, his conspirators nearby. When Rasputin’s giant form did not succumb to the poison, he was beaten with an iron rod and then shot four times. Believing he was dead, the villains dumped his corpse into the Neva River, but an autopsy showed water in his lungs, indicating death by drowning. The English write-up in the palace states these facts are a compilation of writings and disclosures of the assassins after they escaped Russia.

It is now time to relish one of the top caliber world museums – the State Hermitage. Facing onto a gigantic cobblestone square, the Winter Palace is spectacular in mint green, white and gold with a profusion of columns and windows; and the roofline is topped with rows of classical statues. An imperial home for hundreds of years, it boasts 1057 rooms and 117 staircases. The Winter Palace is now one of five connecting buildings along the Neva River which make up this grand Museum. With over 3 million works of art and treasures housed within, we plan our route knowing one day could never do it justice. 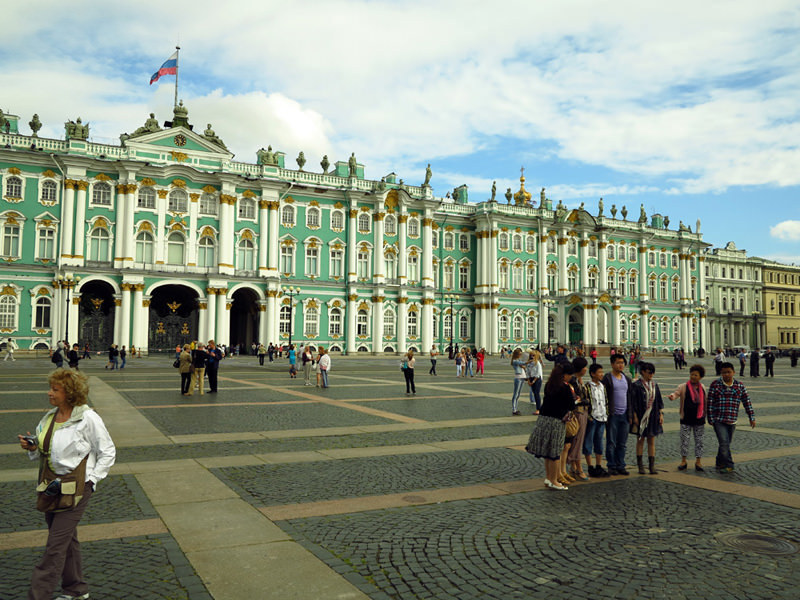 The Winter Palace entry is astounding! I imagine a yesteryear grand ball with dignitaries ascending the fiery red carpet centered on the wide marble Jordan Staircase. I stop periodically to gaze at the lofty sculptured white ceilings with exquisite works of art painted in the dome. 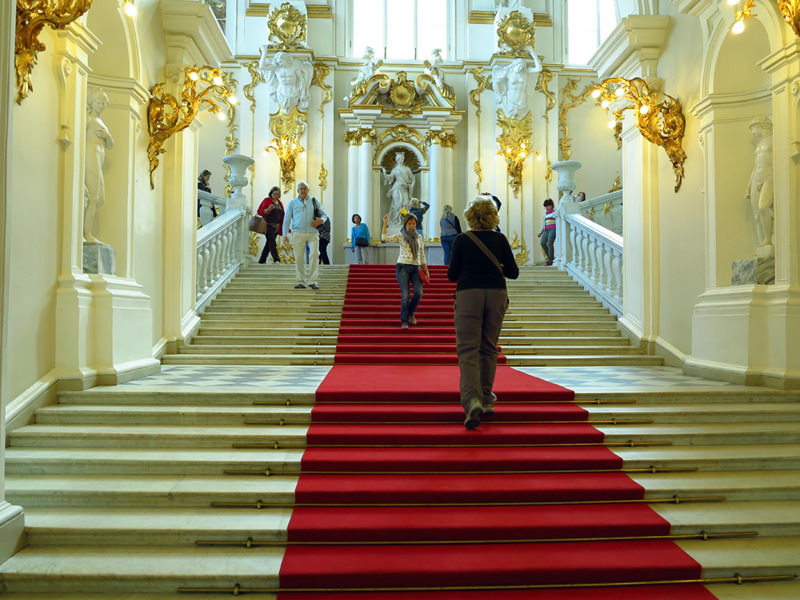 Numerous imperial staterooms and apartments drip with opulence, each with its own sumptuous and dramatic decor; some with gigantic copper chandeliers, others with gold or marble pillars, or floors with varied woods arranged in intricate patterns. We zero in on works of the old masters; Da Vinci, Rubens, Rembrandt, Tintoretto – to name a few. A lengthy chamber called Raphael’s Loggias, commissioned by Catherine the Great is splendid, a copy of the wondrous room in the Vatican. 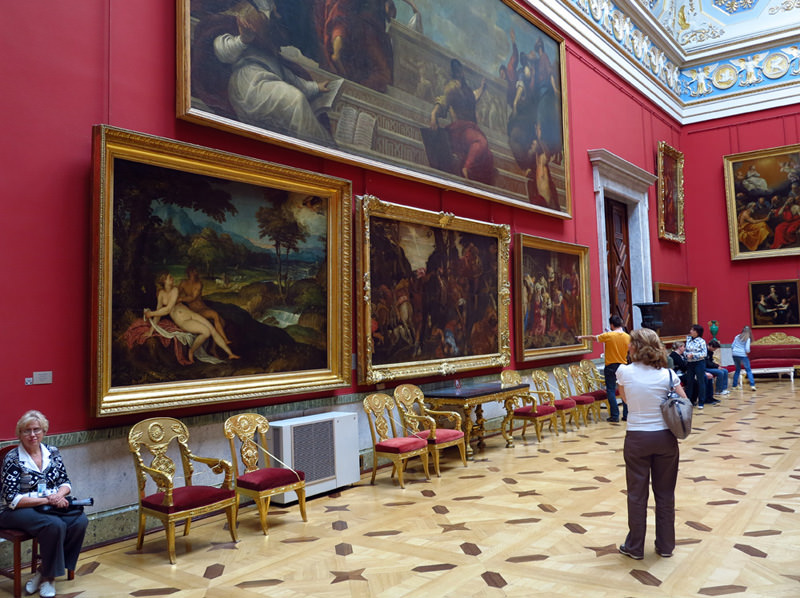 After a break for a much needed energy boost in the museum café, it is off to again become lost in the wealth of the impressionists, such as Cezanne, Gauguin, Van Gogh, Picasso. Henri Matisse’s flamboyant red bodies called “Dance” and “Music” (1910) commissioned by Sergei Shchukin were first painted with male genitalia, but Sergei asked that these “man-parts” be painted over in case polite Russian society might object. 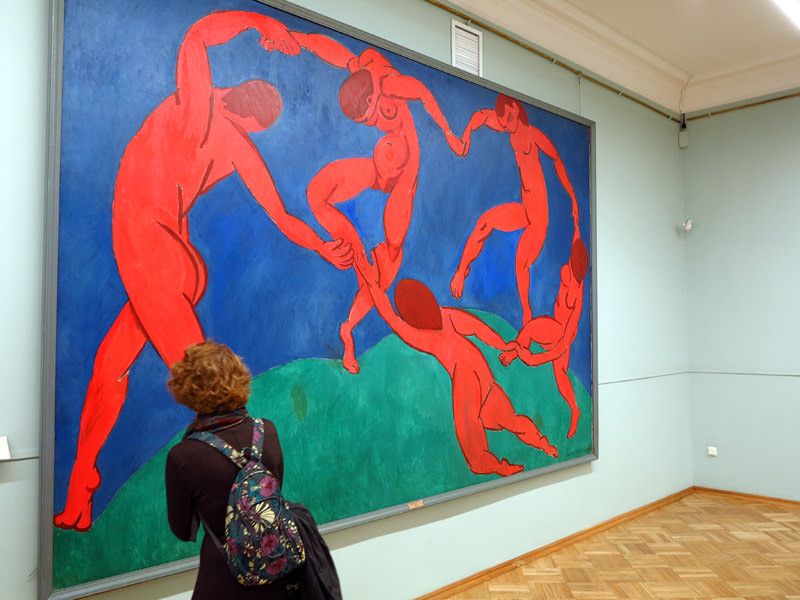 Catherine the Great began the vast collection and Nicholas I enhanced it, as post-Revolution works were confiscated by the State from the wealthy citizens, thereby expanding the collection three-fold. Yet 20-times-more than displayed is said to be in vaults! After six hours and three floors of the Winter Palace, plus the main floors of other buildings named the “Little” and “Large” Hermitages, we leave dazzled and satiated. 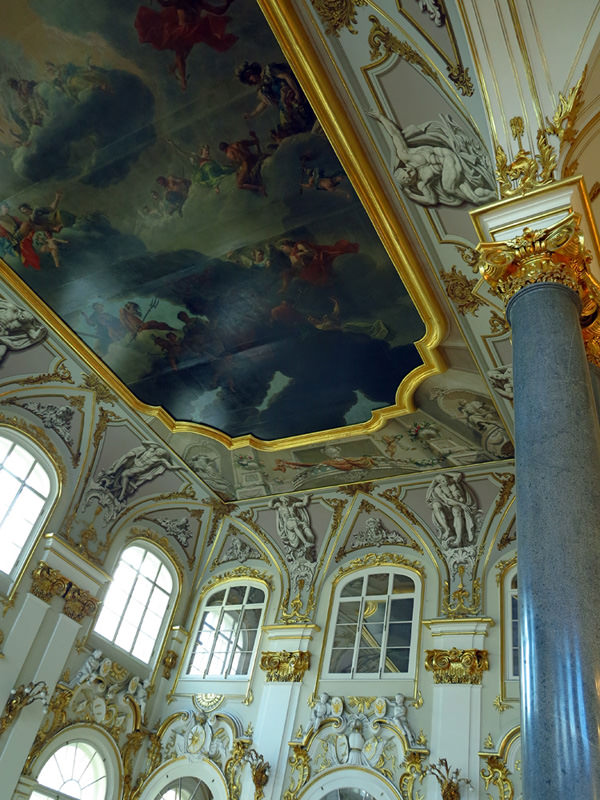 St. Petersburg stirred sensations of having time-travelled through the 300 years of Romanov rule. Designed by Europe’s greatest architects, and for the most part untouched by Soviet rule, it remains one of the world’s most enchanting cities, enhanced by exchanges with its gracious citizens. 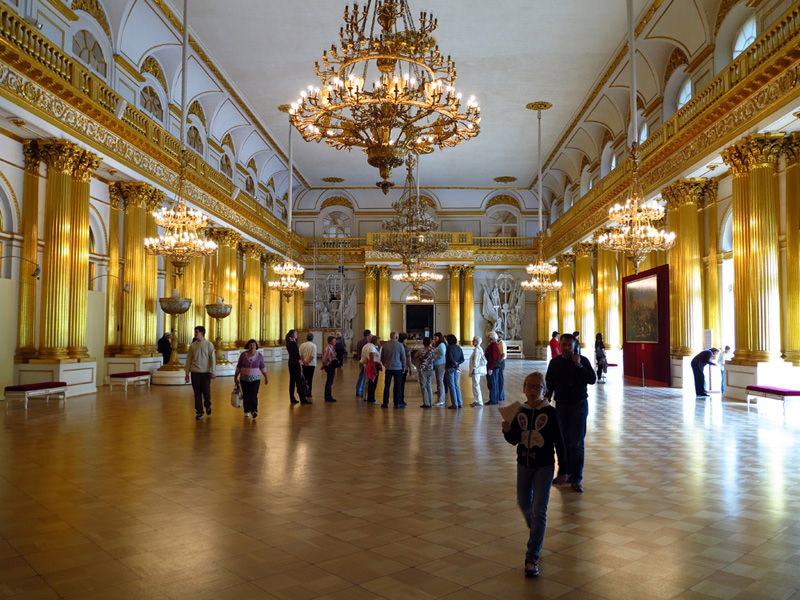 More Info:
State Hermitage Museum Tip: The queues are long to purchase tickets, and the ticket kiosks on the grounds only begin to work when the museum opens – so we highly recommend buying tickets in advance, on-line, for immediate access.

Suggested Accommodation: Ave Caesar Hotel – a block from Nevsky Prospekt. Reasonable price (for St. Petersburg), English speaking staff, clean/comfortable rooms, breakfast incl. No elevators, so if stairs are a problem, ask for a room on the lower levels. Nikita Khrushchev’s brother once had a flat on the first floor. More recommendations for hotels in St. Petersburg.

Fantastic! What a gorgeous city!