It was a frigid, bland kind of Tuesday in St. Petersburg. I could not tell if it was colder than the day before, but it was definitely weather for the wooliest, thickest socks and gloves. It was the kind of weather that starts to freeze the blood in your face so that you can’t feel the tip of your nose, and it becomes hard to talk or even smile. The clouds, in a wan blue sky, were enormous, but it was too cold to rain and there was no hint of snow. The clouds hung very low over the city’s bent heads, like they had every day since I arrived. 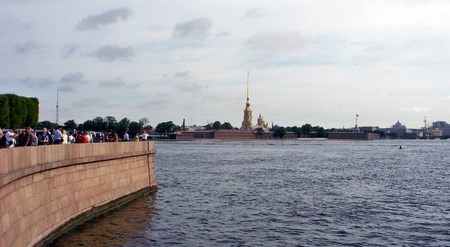 On this day, I had joined an excursion to the Peter Paul Fortress, the stronghold built (1703) by Peter the Great to protect against the Swedish Navy, and also marked the very beginnings of St. Petersburg. At this noble Russian fortress in this city formerly known as Leningrad, I came upon something I had forgotten to expect, something that woke me from my disoriented gaze—the burial site of the entire Romanov family.

I had forgotten that the Romanov’s remains (supposedly) had been found recently, and were moved here to the Peter Paul Cathedral within the fortress where all of Russia’s czars and czarinas are also buried. The tomb was gleaming and golden with fantastic detail. I began to imagine how long it must have taken to build such a monument and how talented the artists (or slaves) were who created it. The churches here in Russia are astounding, unlike anything I had ever seen—how much time, energy, thought, and love (maybe) was put into creating something, out of nothing – just an idea, a faith. From a pile of dirt and rocks comes something so grandiose that one cannot fully absorb it all in a simple, 30-minute guided tour or, for that matter, even an entire day. The Peter Paul Cathedral was closed in 1919 (during the Russian Revolution) and converted to a museum. While it is still a museum today, religious services resumed in 2000. 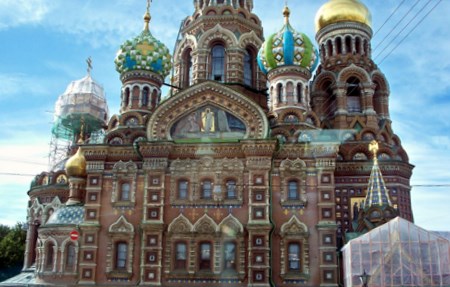 I could have stood within the building’s ancient arches for days, discovering new mosaics, delicately carved icon frames, or simply observing all of the artistic detail in a new light each time I returned for a viewing. I tried imagining how the nobility and their guiding church elite conducted their somber ceremonies; where they stood, the length of their beards, and if they themselves were impressed with the interior of the cathedral that their contemporaries had created.

And then, a few years after this excursion, I discovered the late, great Russian film director, Andrei Tarkovsky. Tarkovksy answered my ruminations in a profound and challenging film that probes the extreme depths (the film is 3.5 hours long!) of the 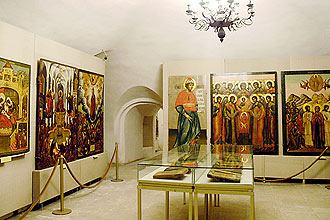 origins of and issues surrounding Russian religious art. The 1966 film, simply entitled Anrei Rublev, loosely, but beautifully and meticulously follows both the inner and outer life, and works, of Andrei Rublev, a 15th century monk and one of the country’s most well-known painters of religious icons. Although little of his work remains intact today, his surviving icons and paintings can be viewed at the Andrei Rublev Museum of Early Russian Art in Moscow, alongside other examples of Russian religious art from the 12th-16th centuries. So, before you venture out on your Slavic holiday, I highly recommend putting aside some time to absorb this incredible feat of film-making and gain a higher appreciation for the complexities and mysteries at the heart of the religious paintings, and painters, of Russia.

Great imagery - I would love to get there someday.