Attending a sporting event while you travel is a great way to experience a country’s culture and connect with locals. Rugby can be a fun choice, because it is similar to Football, yet a little exotic at the same time. One of the biggest events is the Six Nations’ Rugby Championship, which began 4 February 2017.  Whether you watch in person or in a pub, in Europe or in the U.S., here’s what you need to know to be a great fan. 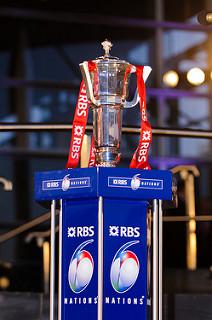 Rugby is one of the most popular sports in the world. It’s especially favored in the UK, where the sport is said to have originated at Rugby School in 1823 when William Webb Ellis, a student playing football (soccer), picked the ball up in his hands and ran. (Others claim the sport wasn’t truly invented until a few seconds later when a second player tackled him and told him to keep his sodding hands off the ball.)

The Six Nations’ Rugby Championship began in 1882 as a competition among the UK Home Nations (England, Ireland, Scotland, Wales) and expanded to include France in 1910 and Italy in 2000. The annual tournament is a round robin, wherein each team plays every other team once, and the team with the best record is declared the champion.

Photo by National Assembly of Wales CC BY 2.0

You don’t need to support a team to enjoy watching the tournament, but it helps. If you enjoy cheering for the underdog, pick Italy or Scotland: neither has won the Championship since Italy joined in 2000. If you prefer a winning ticket, pick England or Wales, both favorites for 2017. England is the current champion and holds the record for most Six Nations’ Rugby championships (27), followed closely by Wales (26). England also holds several of the inter-tournament rivalry trophies, including: Triple Crown (awarded to the Home Nation who beats all other Home Nation teams), Calcutta Cup (awarded to the victor of Scotland v England), and Millennium Trophy (awarded to the winner of Ireland v England).

As in any sport, each team has a signature color, and fans are identified by their color choices. While rugby fans are no soccer hooligans, they’re not teetotalers either, and wearing the wrong colors in enemy territory can be problematic, if not dangerous. (Just ask my friend who had to drag me, my red shirt, dragon earrings, and Welsh flag out of an English pub after Wales beat England in the 2015 World Cup.)

If you want to demonstrate clear neutrality, wear gray, black, or something obviously non-threatening — like hot neon pink. If you want to support a team, wear their colors, but be aware of your surroundings and travel with friends, especially if you’re not supporting the home team. This chart can help: 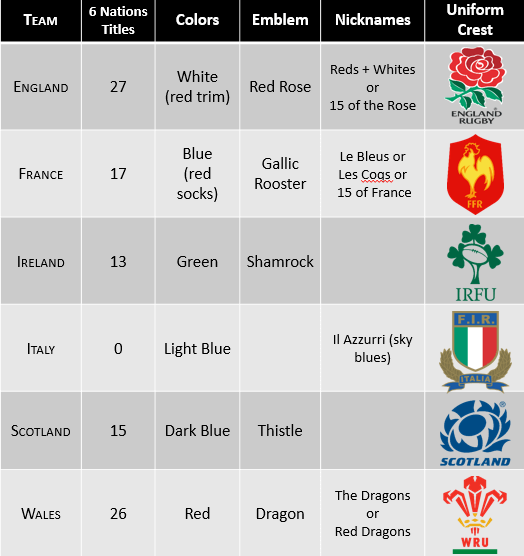 *As a side note, the American rugby team is called the Eagles.

Despite my color warning, rugby fans are generally welcoming and eager to explain the esoteric rules of a confusing game. You’ll get along even better if you follow these guidelines:

Don’t compare rugby to American Football – unless you immediately follow it with a comment on how rugby is better. Nothing will declare your American ignorance of the game more than a casual comparison to American Football (and remember American football differs from football – what Americans, alone in the world, call soccer). That said, you’re not wrong. American football grew out of rugby football with the invention of the forward pass, so there are a number of similarities.

There are many excellent online explanations of rugby rules (such as here and here), so I will only highlight four major differences:

1) In rugby, the ball may not be passed forward. Even fumbling forward is a penalty. Players only pass sideways and backward, which is why they line up behind and to the side of the ball carrier.

2) No player on the offensive team may be in front of the ball. The only exceptions are brief moments during set pieces.

3) No blocking is allowed.

4) Play continues after a tackle. The tackled player must release the ball immediately. Ideally, he places it behind him so his teammates, running up behind, can retain possession.

A note on terminology: When a player gets into the opponent’s end zone and touches the ball to the ground, a “try” is awarded. It’s called a try because the team may then try to kick for extra points. This is where the American Football term “touchdown” comes from: in rugby, the ball must actually touch the ground, which is why you’ll often see players drive across the goal line. 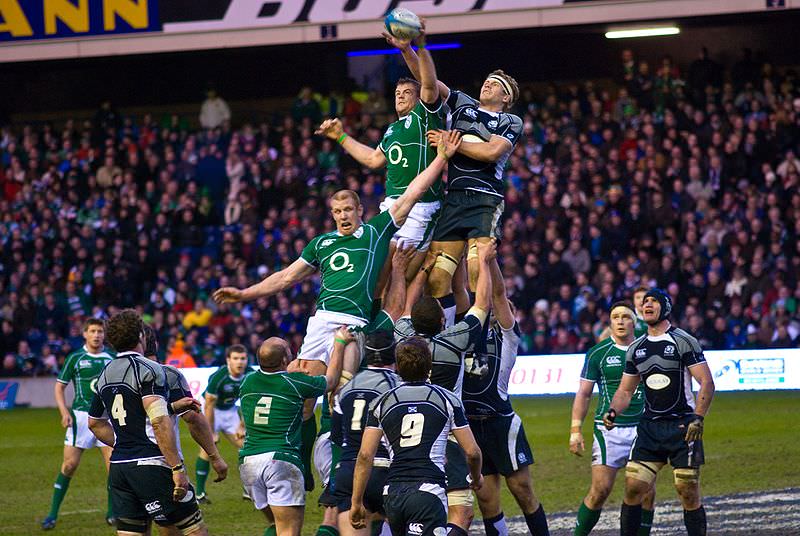 Photo by Conor Lawless CC BY 2.0

Do be prepared to sing (or cover your ears). Singing has an important place in rugby culture. Wales, in particular, has a strong choral tradition, and fans often break into “Bread of Heaven” during Six Nations’ Rugby matches. Wales actually started the sporting tradition of singing the national anthem before games in 1905 when they sang “Hen Wlad fy Nhadau” to distract from the New Zealand All Blacks’ haka. Another popular Welsh tune is “As long as we beat the English,” by the Stereophonics, for obvious reasons. 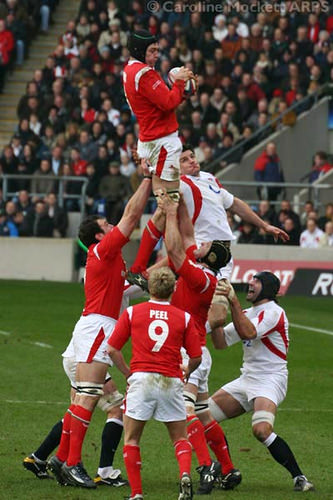 A bit more controversially, English fans often sing “Swing Low Sweet Chariot”. There’s no discernable reason, but don’t be surprised if the stands break out in gospel. Other fan sections may sing the national anthem (or non-anthem, as the case may be: Scotland has no national anthem and so sings “Flower of Scotland”). For Irish games, two national anthems may be played: one for the Republic of Ireland and one for Northern Ireland, both represented by the Ireland team.

These traditional songs may be sung in the stadium or in bars, but in bars, there is also a less family-friendly rugby tradition of singing the kind of songs that might get your mouth washed out with soap if your mother heard. Just be prepared to cover your children’s ears if you hear the lines “There was a rugger in red…” or “Four and twenty virgins…”

Photo by England Kath CC BY 2.0

Finally, on that note, stay lighthearted. Not everything that seems objectionable in rugby really is. For example, the “Support your local hooker” t-shirts you’re likely to see refer to the player position called hooker: the player wearing the #2 jersey (because player jerseys are numbered by position), who stands in the middle of the scrum, propped up by the (aptly named) props, and whose job is to hook the ball, using his foot, back to his team. Nothing untoward at all. 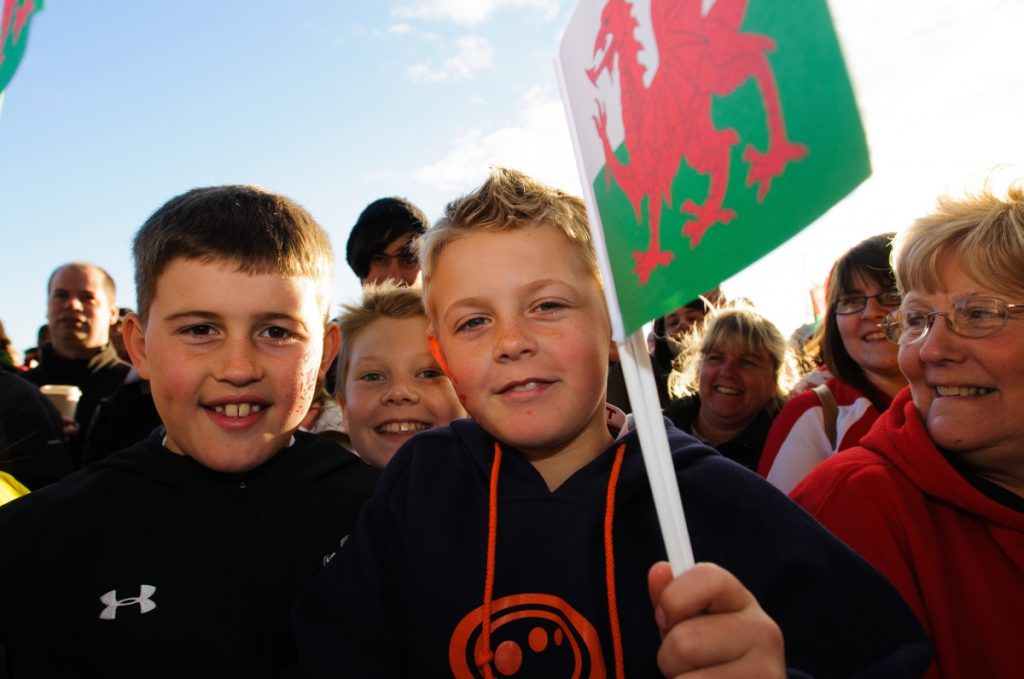 Photo by National Assembly of Wales CC BY 2.0

If you attend live

The official lottery for Six Nations’ Rugby Championship tickets has already occurred, but if you’re keen on seeing a game in the stadium you may be able to purchase tickets at the last minute at the stadium itself. If you’re lucky enough to acquire tickets, be prepared for a late night getting home. Some late kick-offs (as late as 9 pm in the past) mean fans don’t leave the stadium until close to 1 am, when public transport may have shut down. Make backup plans just to be sure you don’t get stranded.

In the stadium, you’ll be able to purchase alcohol. Some stadiums do not accept international licenses, so in theory, you’ll need to produce your passport, but in practice, I’ve never been asked for an ID, so this may be unnecessary unless you’re particularly baby-faced. In most stadiums, you’ll be seated in a mixed section, with supporters from both teams, so cheer your heart out, but keep it polite. 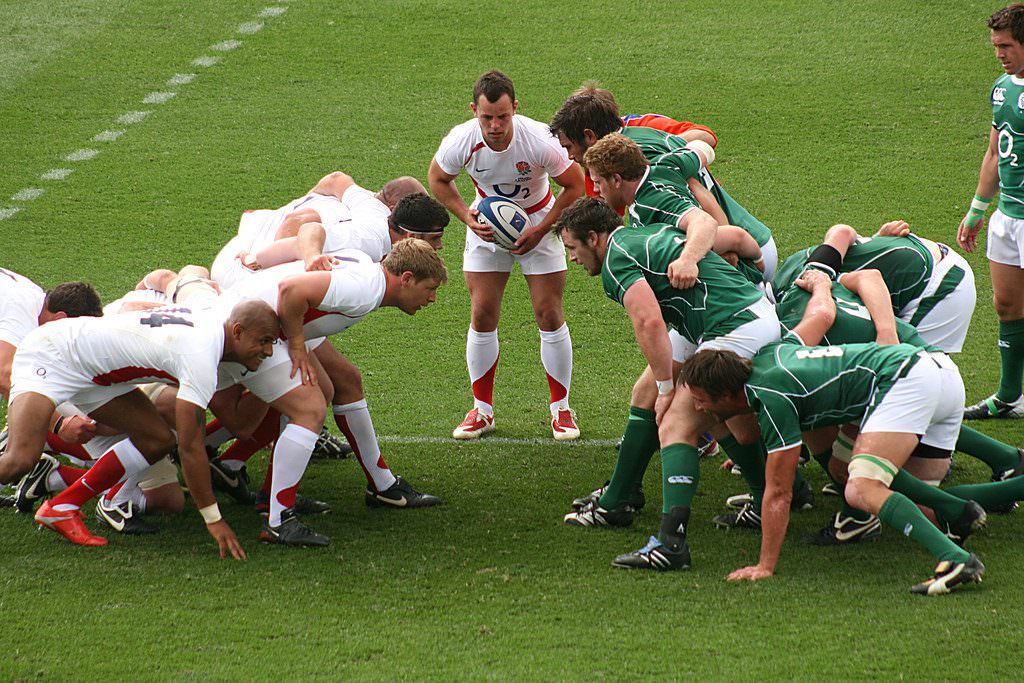 Photo by Eoin Gardiner CC BY 2.0

If you watch in a pub

Basic etiquette applies. Don’t steal someone’s seat. Don’t stand in front of the TV during a critical moment. (This may seem obvious, but someone stood in front of the set during a game-making World Cup kick and was almost mauled. Don’t be that person.) If you’re in the UK with UK friends, you’ll probably be drinking in rounds, so buy a round for everyone early on. It’ll be easier to get to the bar, and you’ll come off as in the know.

In the U.S., sports bars sometimes show rugby games, especially for large tournaments like Six Nations’ Rugby, but if not, Irish pubs are a good bet. A small cover may be charged but should not exorbitant. Some games kick off as early as 9:25 am Eastern Time this year, but many Irish pubs will open for the games and serve a full Irish breakfast, so go early to get a table and go hungry.

The official game schedule is available here but check with your local pub to verify local viewing times.

Written by and photos by Anne Siders for EuropeUpClose.com

And if you want to learn more about Rugby, we highly recommend this book: