Capital of the southern Andalucía region, as well as Spain’s cultural and artistic core, Seville is aesthetically beautiful, intoxicating and graceful. Moorish and Arabic architectural sensibility dazzles in a city rich with Spain’s most archetypal cultural attributes. It is here that the bullfight, flamenco and tapas all 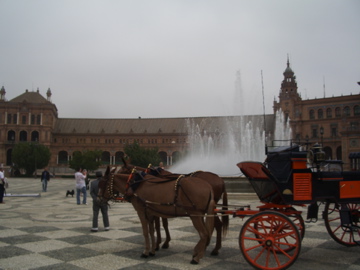 originate, and it’s hard not to lose yourself in Seville’s authenticity, to bask blissfully in the beautiful soul of this delightful hub.

More than 2,000 years old, Seville drips with a rich, lingering sense of the past. After all, it was for various periods of time that the conquest of Seville by Romans, Moors, Arabs and Castillanos, left an ebbing legacy of ownership and rule that profoundly shaped the aesthetic of the city’s structures, style and cultural narrative.

After spending considerable time in the big smoke of Madrid, we were thrilled to find such a vibrant city just two hours south. Seville is full of life and brimming with soul. We checked into the Oasis hostel, one of the more modern and budget-friendly options in town. I’d endured a particularly horrifying impromptu haircut the night prior in Madrid, courtesy of a cabal of English and 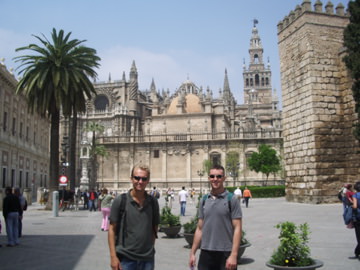 Canadian backpackers.  It brought instant regret this morning, along with the obvious need for an emergency patch-up job from a local hairdresser. Subsequently, we stumbled upon an innocuous looking “pelaqueria” and a genteel fellow armed with scissors and some resemblance to Tony Soprano from The Sopranos. Clearly unimpressed with my horrendous mullet-hawk hairstyle, my skilled Barber of Seville came through with the goods and salvaged a bit of my dignity with an excellent fix-up cut.

Andalucians say that late April is the perfect time to find yourself in Seville; the weather is glorious and the city is switched to full party mode by celebrating the annual week-long ‘Feria’, a much revered flamenco festival, with drinking, dancing, and socializing. It is a true 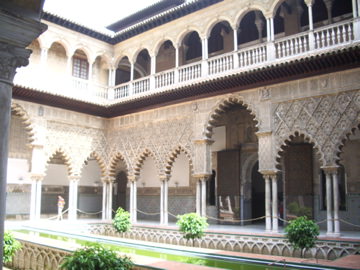 We ventured into the heart of town to sup the flavors of the Feria while indulging in traditional flamenco dancing with gorgeous local Senoritas who did their best to smooth out and correct our novice Flamenco-dancing attempts. There is something uniquely soulful and lavishly romantic about the Seville flamenco—so traditional and almost transcendental. Infected by the mystique of Seville’s cultural spirit, we danced with arms flailing, until the wee hours when the promise of succulent Churros and hot chocolate enticed us back to the direction of slumber. 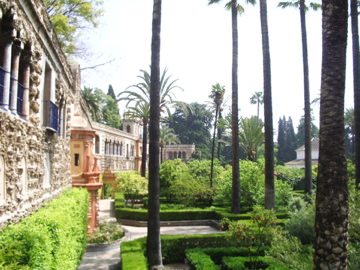 The following morning was balmy, misty, overcast yet warm, and we were greeted by the scent of Andalucian perfumes and musty wet trees after rain. Revelers from another huge night at the feria strolled through town along with Senoritas in traditional Flamenco dresses, as well as horses and carts with bells and trinkets.

We set out to take in the myriad sights and sounds of the city, including the Plaza of Spain, where giant water features spill and Flamenco buskers strum glistening guitars. We also discovered the regal Neo-Moorish-Romanesque Alcazar Castle, the ‘weekender’ getaway for Spain’s monarchs. With a prominent cathedral tower positioned in the background, the Alcazar gardens proved extensive and deluxe, and the brilliantly ornate tiled rooms and golden halls were impressive.

Seville, we were told, is also home to the infamous Spanish bullfight. Say what you will about this spectacle, 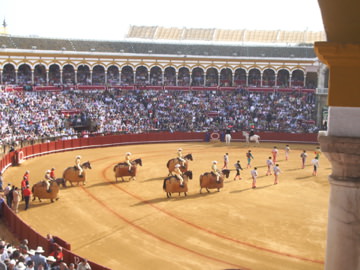 we felt compelled to see it, and wandered in the afternoon sun to the huge Maestanza Bullring for the afternoon event. We sat cramped on concrete bench seats up the back rung of the huge, historical stadium amongst a couple of thousand suited and frocked up Spaniards. With valiant trumpet fanfare, the Matadors and their cohorts pranced in their gleaming pink, yellow and blue tights and black slippers, mincing about the ring to the fervent and wild applause of the respectful crowd. A series of bulls were cajoled into the ring, and were then played with and danced upon by the actor-matadors, who set upon the animals with the energetic blood-lust of the masses. It was quite a sight; not something we would return to witness, a tradition so iconic, yet so grotesquely barbaric at the same time.

Yet it was nothing if not authentic, a factor that seems to be Seville’s most compelling attribute. Walking through the hallowed lanes and clustered Casco Viejo cobblestones, it’s difficult not to notice just how laid back, socially conscious, communitarian and relaxed this city is—how comfortable it is in it’s own identity. Seville has great reason to shine on; it is certainly one of the most alluring, soulful and seductive destinations of this remarkable country.