A low, white stucco wall holds me back from a thousand-foot drop into the Aegean Sea. White buildings pile atop each other, tumbling toward the water. I can lean out over the wall and look down, past the rounded blue roofs and jumbles of white houses, and see the cruise ships idling in the harbor. 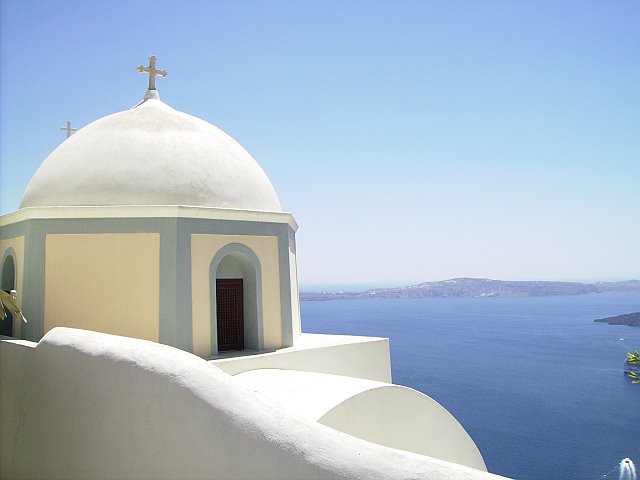 Thira is the largest town on Santorini, and its spectacular setting attracts many visitors each year. Built into a cliff overlooking an ancient volcano, Thira caters mostly to upmarket travelers. Cruises let off day-trippers for shopping on Ypapantis, or Gold Street. Jewelery shops and galleries line the streets, alongside bars that tout their scenic patios. At sunset, honeymooners stroll Caldera Street, which winds through town with views of the volcano. 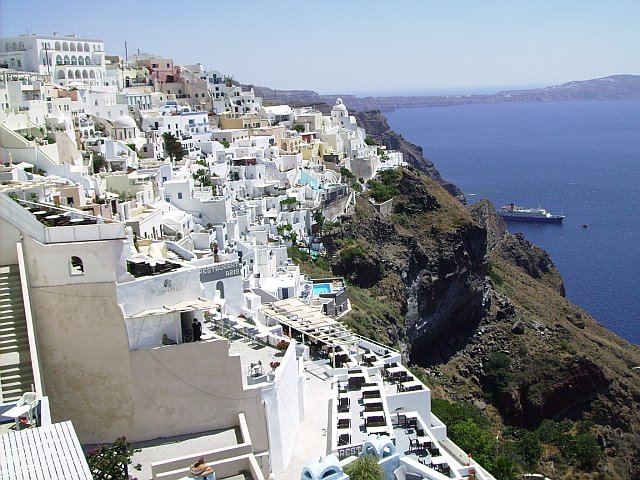 And what a view it is. In the second millennium BC, Santorini’s volcano blew its top, causing massive tidal waves that swept the Mediterranean. The island caved in, creating a ring of cliffs diving into the sea, with the caldera emerging from the center of the bay. The explosion led to the destruction of the Mediterranean’s ruling Minoan civilization, creating a power vacuum that allowed the rise of Athens and classical Greece.

Although buses bring ferry passengers from the nearby port of Athinios, the traditional way to approach Thira is by donkey. Cruise ships dock below the cliffs; visitors then hire a donkey porter to ascend the narrow stairs. A gondola also runs from the docks, for €4 one way. Tour companies operate day-trips to the volcano from the port. 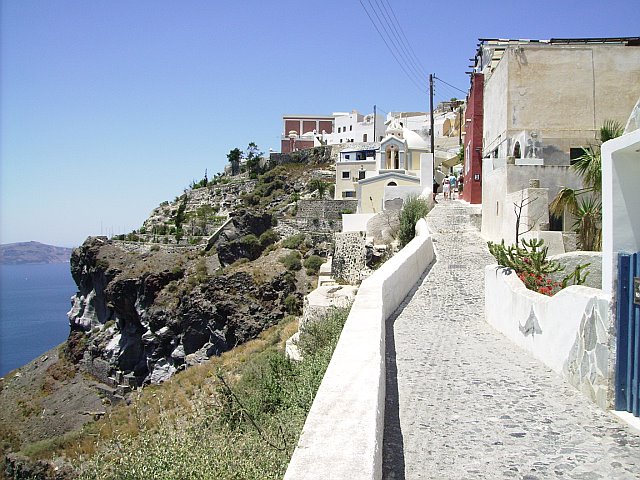 During the heat of the day, most visitors escape to the beach. A short bus ride takes sun-seekers to Perissa’s and Kamari’s black sand beaches along the southeastern shore. On the way to Kamari – a bustling resort – the Art Space gallery and winery shows contemporary Greek art, alongside a tasting of local vintages.

The town of Oia shares Thira’s charm and views, but lacks the daytime crowds. We reached it by hiking along Caldera Street until the cobblestone turned into dirt. We traversed meadows of dry grasses and flowers, as well as construction sites for new boutique hotels. The road ended and restarted a few times, but after 8 km, we walked into Oia. The pedestrian streets, quiet in the heat of the day, were lined with cafes, photography studios, and leather and pottery shops. 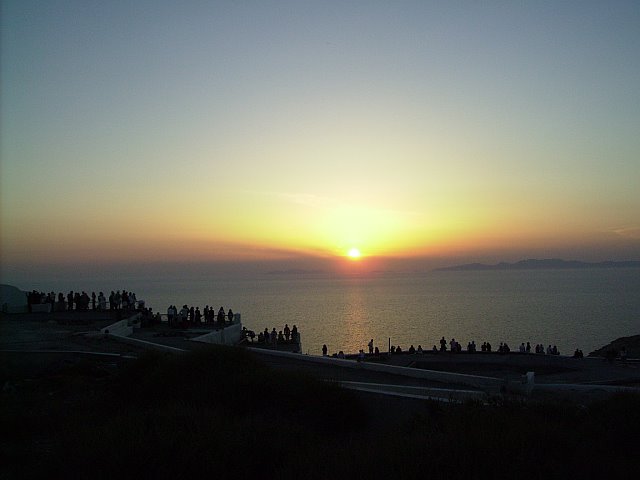 We descended to the docks of Oia. Past the seafood restaurants, the rocky pathway dead-ended at a concrete platform, with bright water lapping the rocks. For the weary hikers that we were, it was the perfect place to jump into the Mediterranean for a refreshing swim. 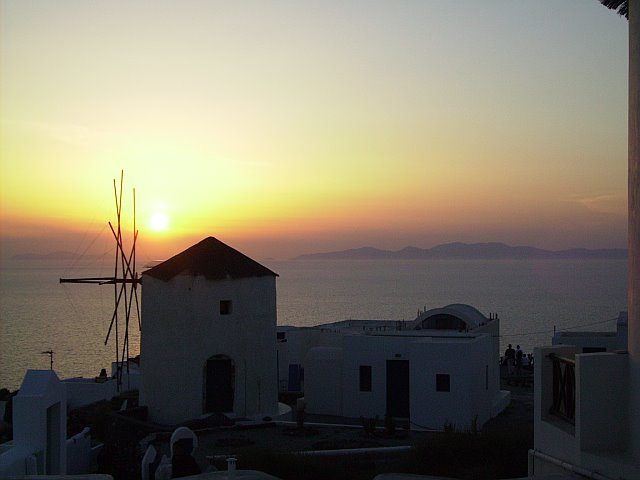 The beauty of an Oia sunset

Knowing Oia is famous for its sunsets, we perched ourselves on a bench as the sun slipped into the water, turning the white buildings orange and pink. A crowd had gathered along the streets, sitting on low walls, faces turned toward the glowing ocean. As usual on Santorini, we shared this incredible view with many people. And as usual, we were far too distracted by the beauty of the island to care.

Ghosts, Legends and a Glimpse of Atlantis in Santorini

[…] road. The dramatic ride up from the port is only the beginning of an unforgettable adventure. Santorini is a mysterious place, haunted and eerie with the ghosts of the long-ago civilization. Greek […]