Half an hour from the industrial bustle of Turin lies southern Piedmont, a renowned Eden for epicureans. Each community has its own claim to fame: the truffles of Alba, the sparkling wines of Asti, the sausage and cheeses of Bra, the world-class wines of Barolo. 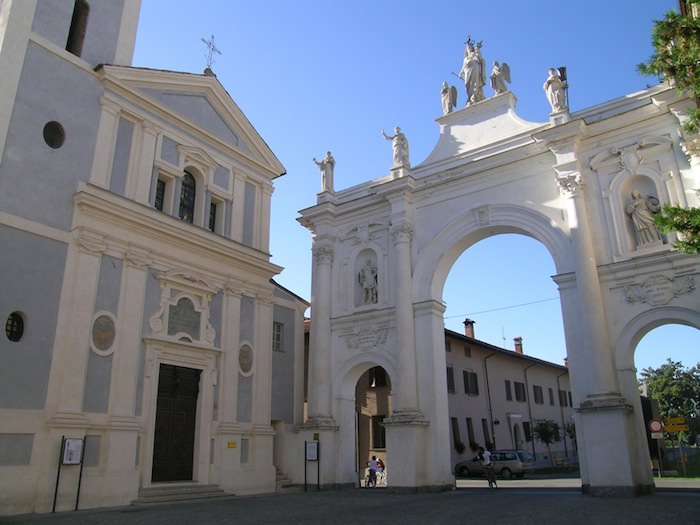 Cherasco courtesy of the Cherasco Tourist board

The landscapes of the Langhe, of Roero and Monferrato, seduce you slowly, with the intricate — and regionally appropriate — complexity of, say, a snail’s sex life. {As hermaphrodites, snails lead exceedingly complex sex lives}. Snails are not a longstanding tradition in Piedmont, but they have become a part of contemporary gastronomic culture here. Italy is the world’s foremost producer of naturally-raised snails, i.,e. snails raised in fields rather than in artificial environments. The meat of these field-raised snails is of better consistency than that of their artificially-grown counterparts, and the flesh is considered to be more fragrant and tender.

Life at a Snail’s Pace

The town of Cherasco (population 8,600), 50 km. south of Turin, is Italy’s snail-growing capital, not by chance.  For more than three decades, the town’s former mayor Giovanni Avagnina was the driving force behind Cherasco’s rise to prominence in elicoltura. Avagnina, a veterinarian by training, was a world expert on snails and snail growing, and encouraged this activity in his native town.   (He was eventually forced from office after corruption charges. . . but that is another story). 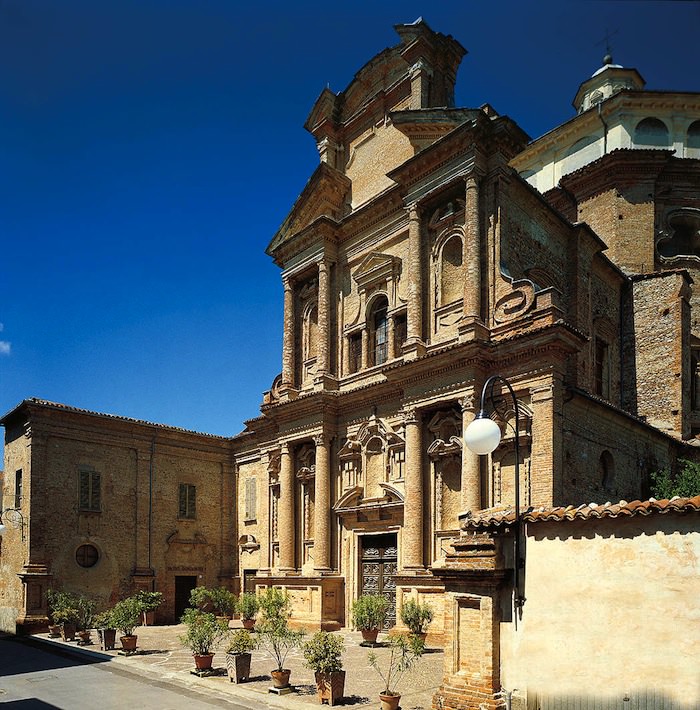 From September 26-29, 2014, the 43rd edition of the International Meeting of Breeding of Edible Snails and the 9th edition of the National Festival of the Snail in the Kitchen will be held in Cherasco. The event attracts some of the world’s 12,000 snail growers, as well as visitors who appreciate a well-cooked Helix. In addition to seminars for the trade, visitors can visit area snail farms and browse displays of live and conserved snails. The restaurants of Cerasco uphold the region’s excellent reputation for cooking with snails, taking the spotlight this month: as an antipasto (in fonduta or bigné), as a first course (in risotto or spaghetti), or as a second course (in green sauce, “Southern style” with sausage and ham, or en brochette). 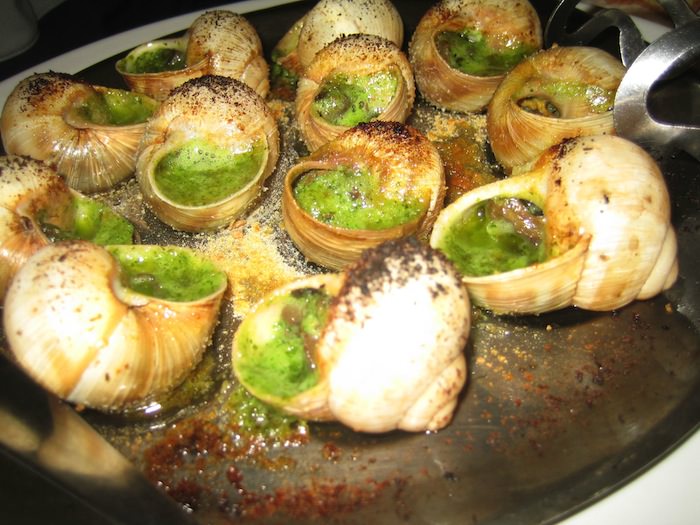 Experts tell us that snails are in synch with today’s diets — rich in protein but low in calories, with a high percentage of polyunsaturated fats, recommended for low-cholesterol diets.

Since desserts featuring snails do not rank high in the gastronomic firmament, Cherasco compensates with another famous local product– its baci, or kisses. This specialty predates the snail industry’s arrival by almost a century. In 1881, a confectioner named Marco Barbero opened a bakery in town that still bears his name and some of his original recipes. One of these is for the Baci di Cherasco, a chocolate and hazelnut confection with nuts originally picked from the family’s trees. The baci are the most popular item in the shop, but its truffles, torroni and old-fashioned pastries — with whipped cream pale as ivory — are not to be dismissed. 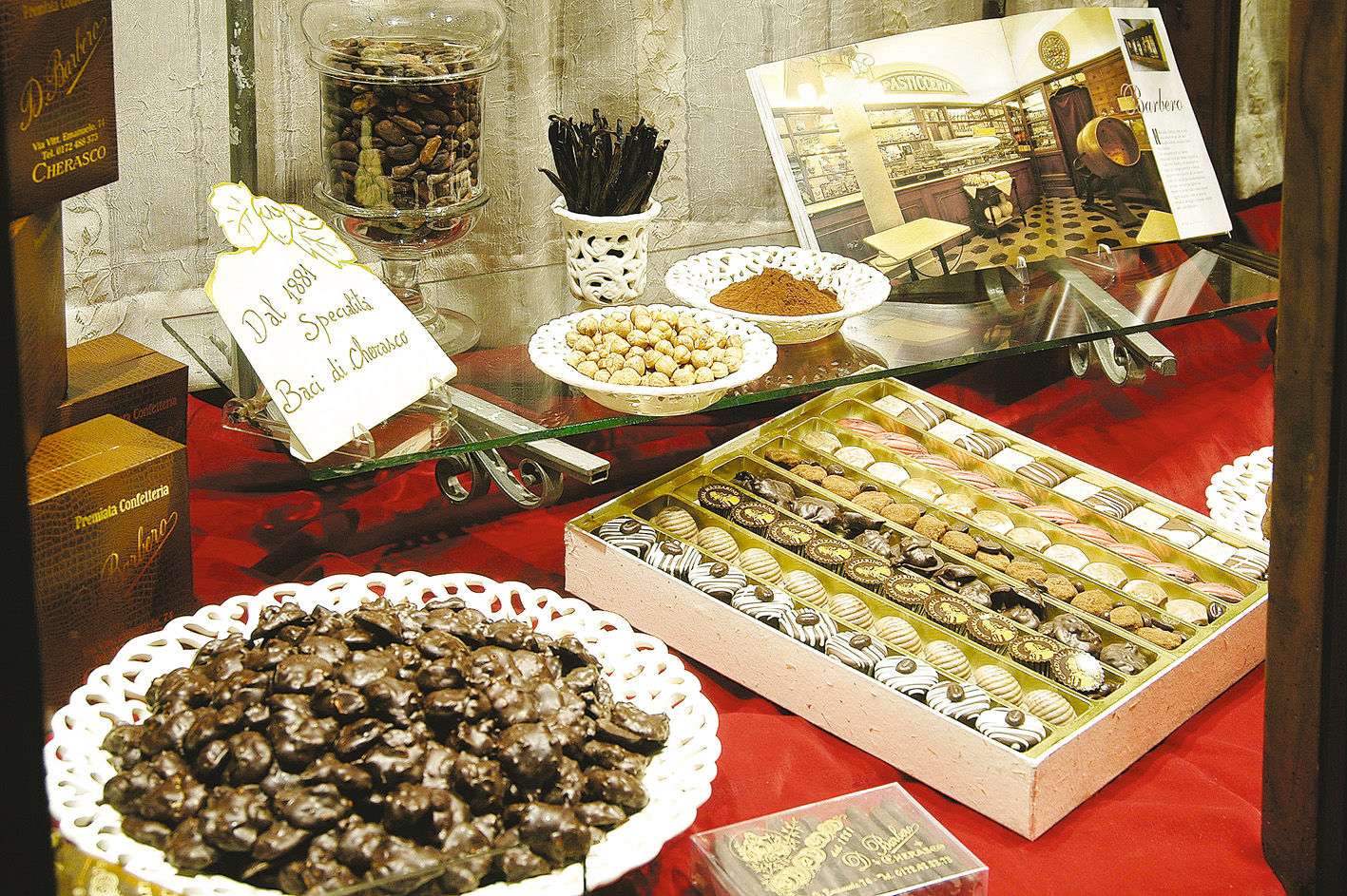 On Sunday, September 14, 2014, Cherasco hosts the 90th edition of its Antique Show and Collectibles Market in the main streets of the town. This edition includes more than 500 benches of participation exhibiting up to a million items along a multi-mile route. Visitors, both domestic and foreign, are drawn by the quality of the antique furniture, collectible items, ceramics, glass and bric-a-brac on sale. 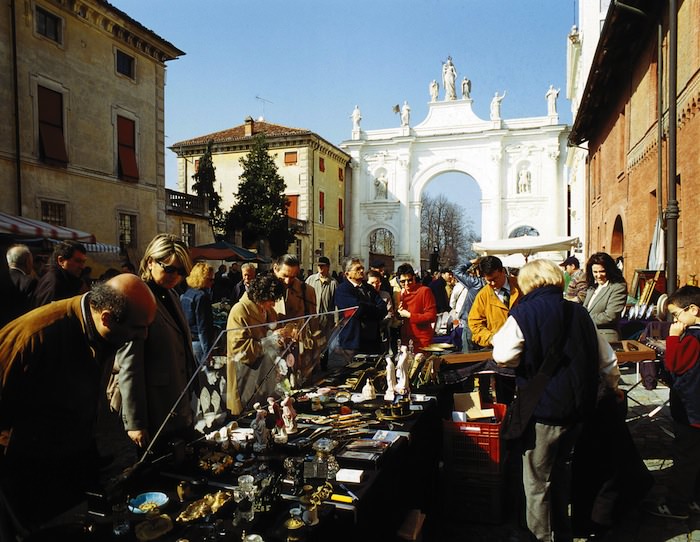 Cherasco provides an appropriate setting for antiques, with its four Romanesque bell towers, five Baroque bell towers, seven architecturally-important churches, dozens of fresco-studded palatial homes, and two Arcs of Triumph — one erected by the town between 1647 and 1688 as a gesture of gratitude for being spared from the Plague. Napoleon is said to have described the town as the most beautiful in Italy. 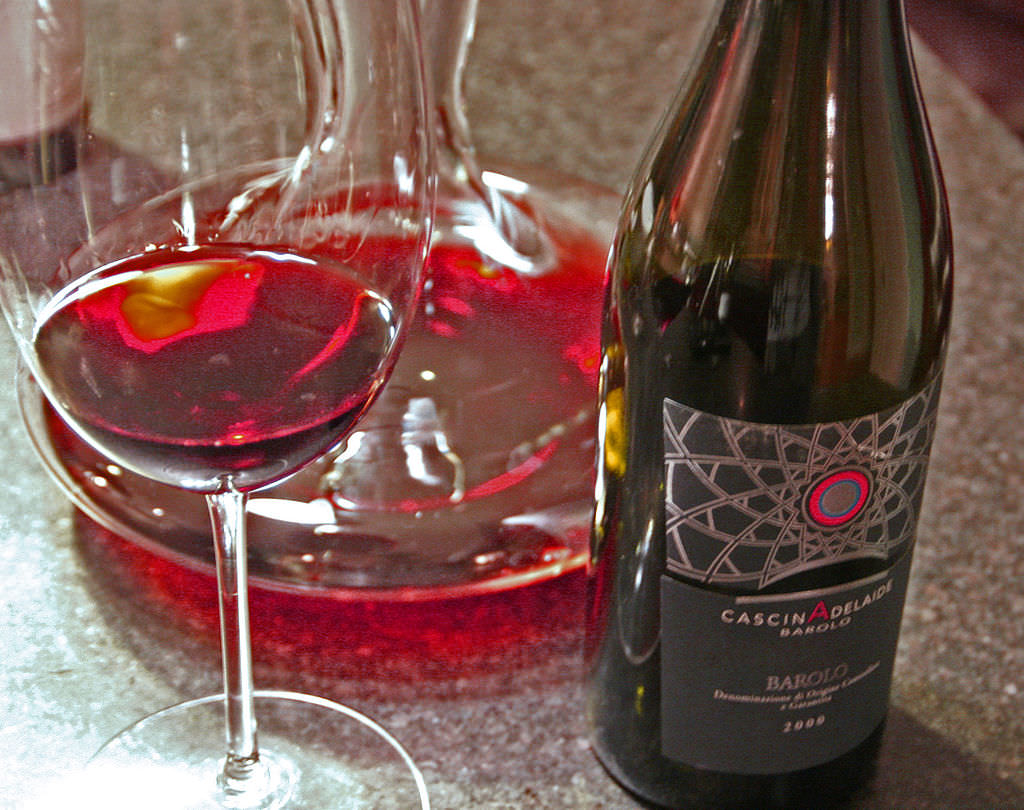 The wines produced east of the Tannero River are household names for intenditori: Barolo, Barbero, Barbaresco, Dolcetto, and Nebbiola. The lesser-known wines to the west — Roero (red) and Roero Arneis (white) — carry lower price tags and are also worthy of respect.

Cherasco sits in a region with the greatest number of D.O.P.-certified cheeses (protected denomination of origin) in Europe, including: Fontina, Raschera, Castelmagno, Robiola, Toma and Murazzano, among others.   Bra cheese comes in two versions, hard and soft, though, strangely, neither one is produced in the city (near Cherasco) that gives the cheese its name. 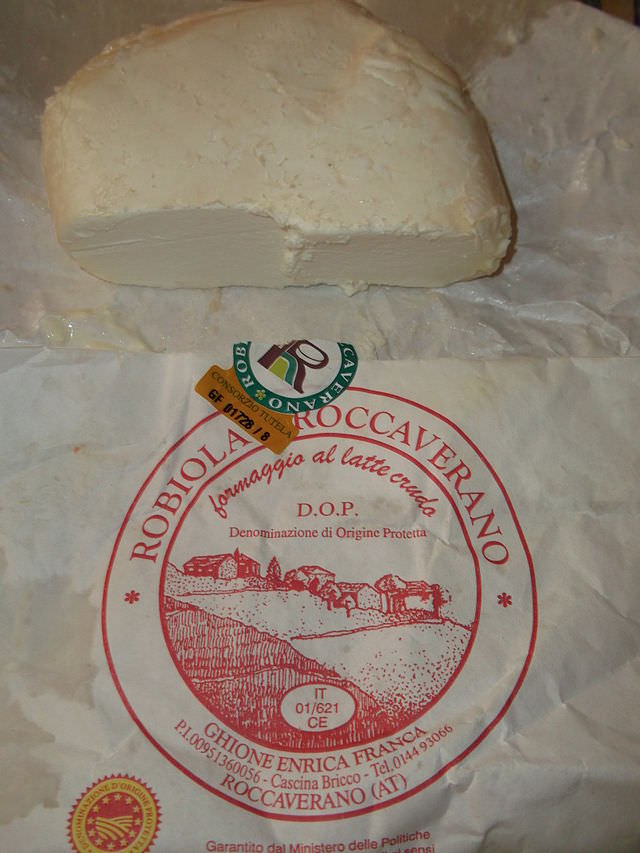 If you go to Bra for the cheese or the charm of the town itself, stop in at the historic Bar Converso (via Vittorio Emanuele 199, Bra). You may be offered a slice of torta braidesotta still warm from the oven, made with almond flour and candied orange, or other original pastries and breads, all hand-made. Even the bar’s ice cream (gelato) is made in-house, including local flavors like panna cotta (with the indescribably creamy texture found only in Piedmont) and fior di panna (rather than the standard fior di latte).

How to get to Cherasco 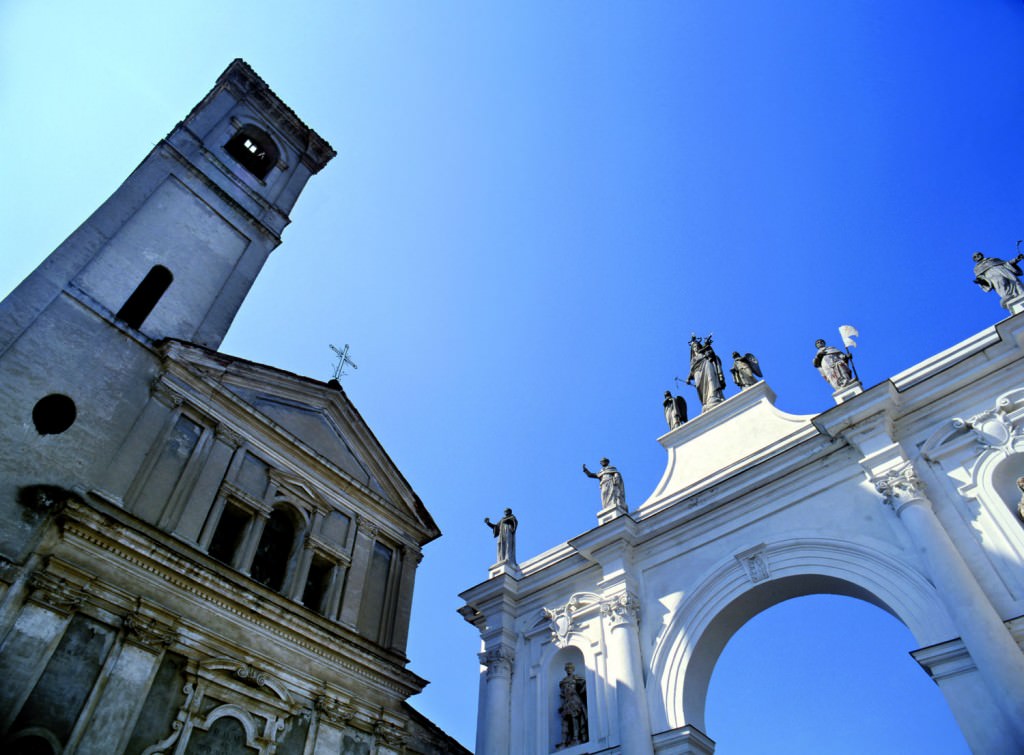 Where to Stay in the Piedmont

The Hotel Napoleon in Cherasco itself, has only 22 rooms so most visitors lodge elsewhere. One of the attractions AND frustrations of the region’s hotels is that they tend to be small and family-owned, with all the plusses and minuses of such size and ownership.
via Aldo Moro 1
Cherasco
Tel: 39 0172 488238

At Albergo Ristorante Giardino Da Felicin, both the warmth of the furnishings and the warm greetings of the Rocca family will make you feel at home – — though the food in their renowned restaurant is light years ahead of home cooking.
Via Vallada 18
Monforte d’Alba
Tel: 39 0173 78225

The nine rooms of Barbabuc  are each personalized with antique and designer furniture befitting its location in an old palazzo in the heart of Barolo wine country. Also in an old palazzo of Barolo is Le Torri (Piazza Vittorio Veneto 10, Castiglione Falletto; 39 0173 62961). It offers nine rooms and eight tastefully-decorated apartments, the latter appropriate for longer stays.
Via Giordano 35
Novello
Tel: 39 0173 731298

If you favour sheep-counting in a castle, try Albergo Real Castello . The hotel and its adjoining restaurant offer mod cons in an 18th century castle atmosphere, with antique furniture, traditional cooking and locally-produced wines.
via Umberto 9
Verduno
Tel: 39 0172 470125

Written by Guest Author Claudia Flisi  for EuropeUpClose.com. Claudia Flisi is an award-winning writer based in Italy. She has two passports, two multicultural sons, two bicultural dogs, and one quintessentially Italian husband (one is enough). For more information, visit her website.

What lovely descriptions for these towns, and particularly of the Helix! They have a texture and flavor that reminds me of a cross between mushrooms and mussels. The Converso Bar in Bra, in addition to having some of the best stracciatella gelato in town, has the thickest, most delicious hot chocolate in Piemonte during the winter months. You will be hard-pressed to find better (and when you do, it will rightly be in Turin, the chocolate capital).

Lovely post. One of my favorite spots in Piemonte and just doesn't get the press it deserves….which might not be a bad thing. :) Your hotel suggestions are great, but I would add Villa Tiboldi to your list of hotels.

September at a Snail’s Pace | Your Daily Buzz

[…] find our meaning? By anchoring ourselves to things that bring out the best in us. Perhaps it means traveling through Piedmont.  Or just doing the NYT Crossword puzzle on a terrace overlooking Lake Como.  Or heading down to […]