The Romans knew it as Eboracum. To the Saxons it was Eoforwick. Then the Vikings named it Jorvik. Today we know it as York. From Roman times onward, Eboracum would become such a well-established political and commercial center that people continued to live here for millennia. Due to the numerous uncovered artifacts (many of which can be seen in the town’s numerous museums), and its plethora of ancient buildings, scholars have long recognized York as one of England’s finest historic cities. 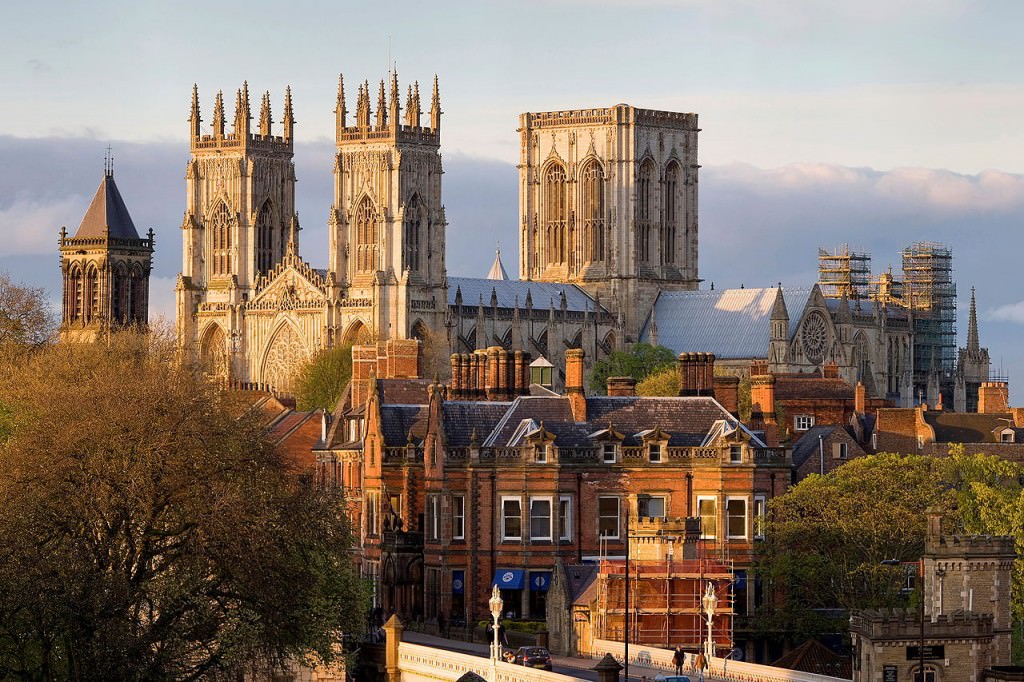 York Minster from the Lendal Bridge – by Jimmy Guano

During my recent visit to York, while ambling through her bustling, narrow, perfectly restored medieval streets, I saw the usual ethnic offerings like Italian and Mediterranean dishes, Tapas, Indian food, plus dozens of intriguing and brightly painted little cafes (Georgina’s Café and Café Rouge come to mind), bistros, and coffee houses. But you can find these foods anywhere. As a travel writer I always like to hone in on the local and regional foods. This helps me assimilate the essential character and culture of the residents a lot quicker than wading through drafty museums.

I make a point of dropping in on every pasty shop I encounter, to try their Cornish Pasties. You can find pasties in the U.S.A, but they lack a certain something. Perhaps it’s just the ambiance that’s different. Eating in the shadow of an 800-year old Cathedral or dodging the pedestrians on a narrow, cobble stone alley that has changed little since medieval times when the townspeople stood here, eating the same things, is a unique experience. 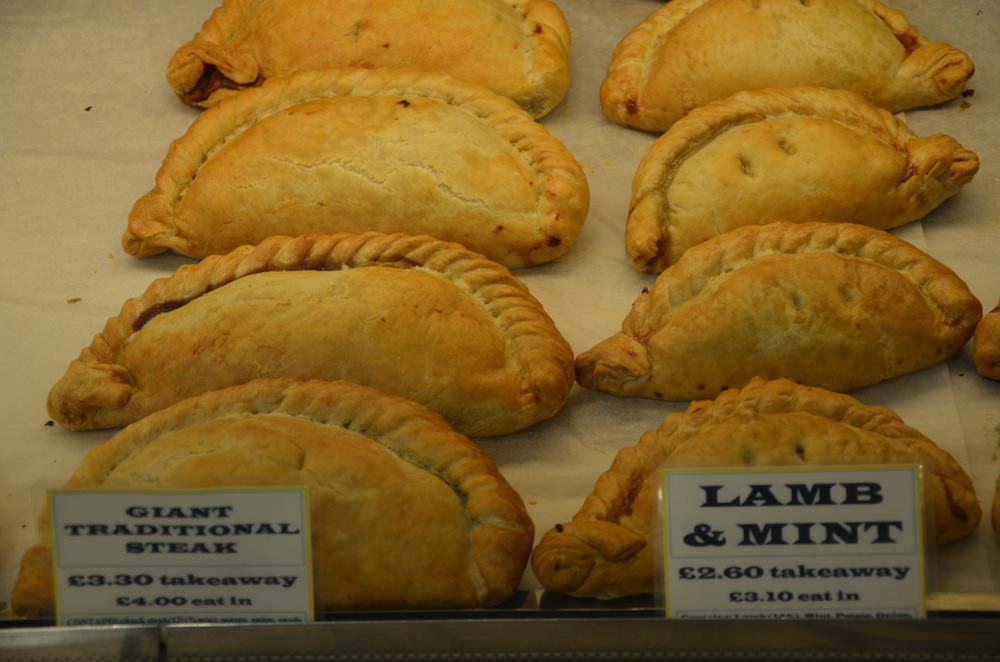 English pasties are giant half-folded crescents of thick, buttery pastry folded around hot, steaming fillings. You inhale the smell of the filling as you start munching your pasty. Just make sure you hold your pasty in the wrapper when you eat it, so you don’t spill the hot fillings. Traditional pasty fillings like steak, steak & stilton, beef & Guinness, vegetable, cheese & mushroom, cheese & onion, lamb & mint, pork & apple, and cheese, tomato and basil, have your mouth watering as you contemplate them through the glass case. My favorite pasty place: The Cornish Bakery on Coney Street. 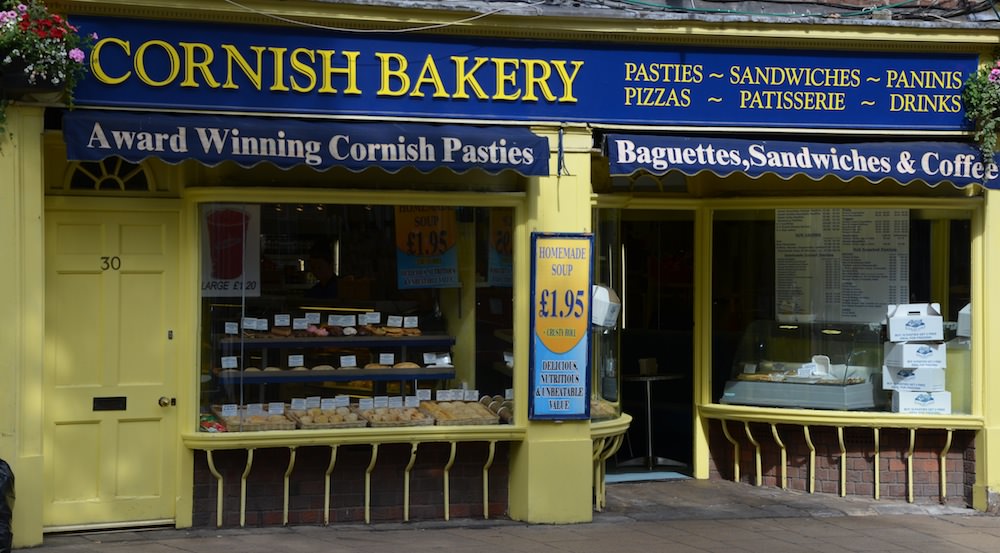 My favorite pasty place: The Cornish Bakery on Coney Street.

A pasty makes an ideal lunch, because for dinner you must have a traditional English roast, served at a few carveries sprinkled around York. Your choices are oven-roasted and hand carved beef, pork, turkey, chicken, ham and lamb, all slow-cooked, with sage and onion stuffing.The meats are served with melt-in-your-mouth roast potatoes, crispy crackling, Yorkshire pudding, fresh vegetables, and with homemade gravy smothered over the top. You can have your roast in a sandwich or without bread, or served inside a crust of Yorkshire pudding (my favorite). Roasts: They’re not just for Sundays anymore! 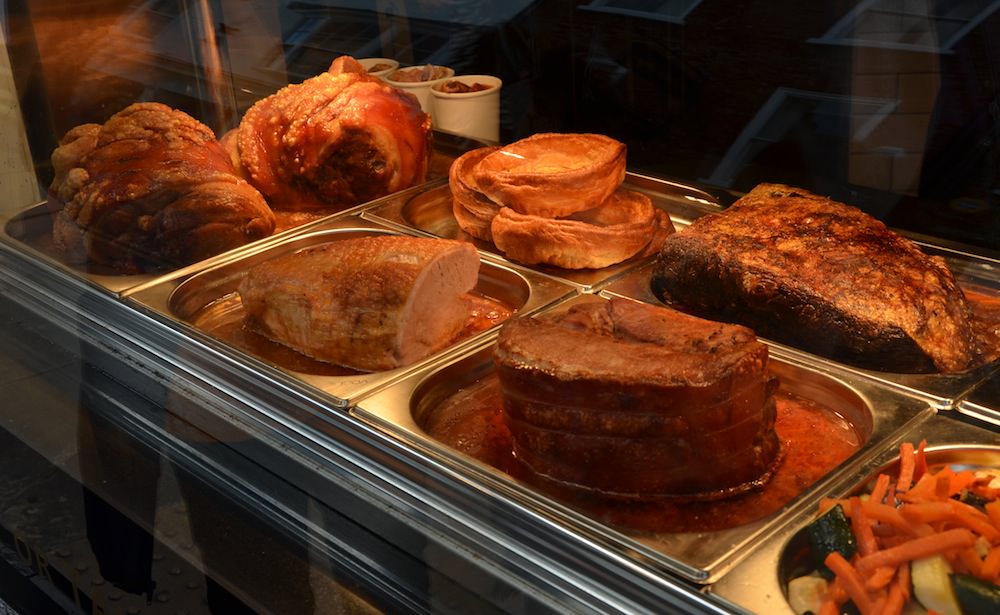 Your roast choices are oven-roasted and hand carved beef, pork, turkey, chicken, ham and lamb, all slow-cooked, with sage and onion stuffing.

My favorite carvery: The York Roast Co. on Stonegate. Be prepared to line up for a while here, as the hungry crowd often spills out onto the street. But it’s well worth the wait. 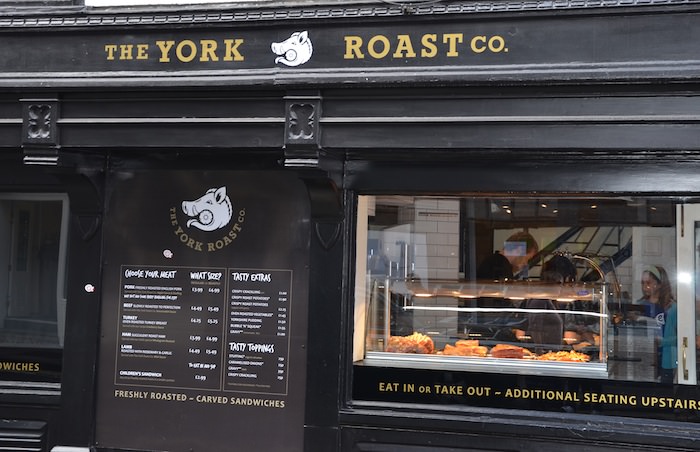 My favorite carvery: The York Roast Co. on Stonegate

I’m not a big fan of Fish n’ Chips, largely because I was fed this constantly in my youth in New Zealand. However, the English do their F & C right. The place to go in York is Drake’s Fish & Chips on Low Petergate. Eat them the British way, piping hot, and smothered in salt and vinegar (only barbarians put ketchup on their chips). 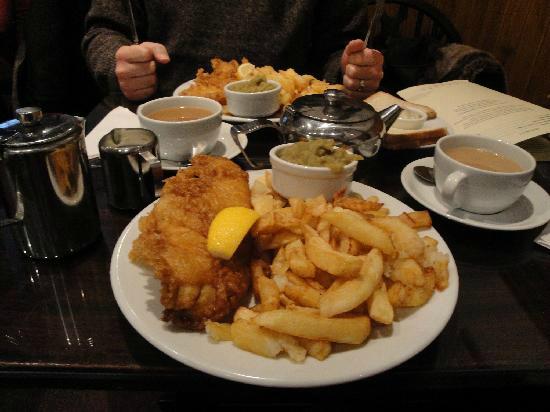 Then there’s the charming English tradition of high tea, that sweet and savory ritual that has caught on in boutique cafes around the U.S.A. One hot afternoon, craving for a high tea, I happened to stop in at the D.C.H. Restaurant in the Best Western PLUS Dean Court Hotel on Duncombe Place, literally in the shadow of York Minster. I was dubious about entering a hotel restaurant, but was about to get a pleasant surprise. I really, really, wanted a high tea, but they’d closed the kitchen a while ago. However, the cook saw the despondent look on my face and kindly got to work. He had a superb high tea laid out in short order. 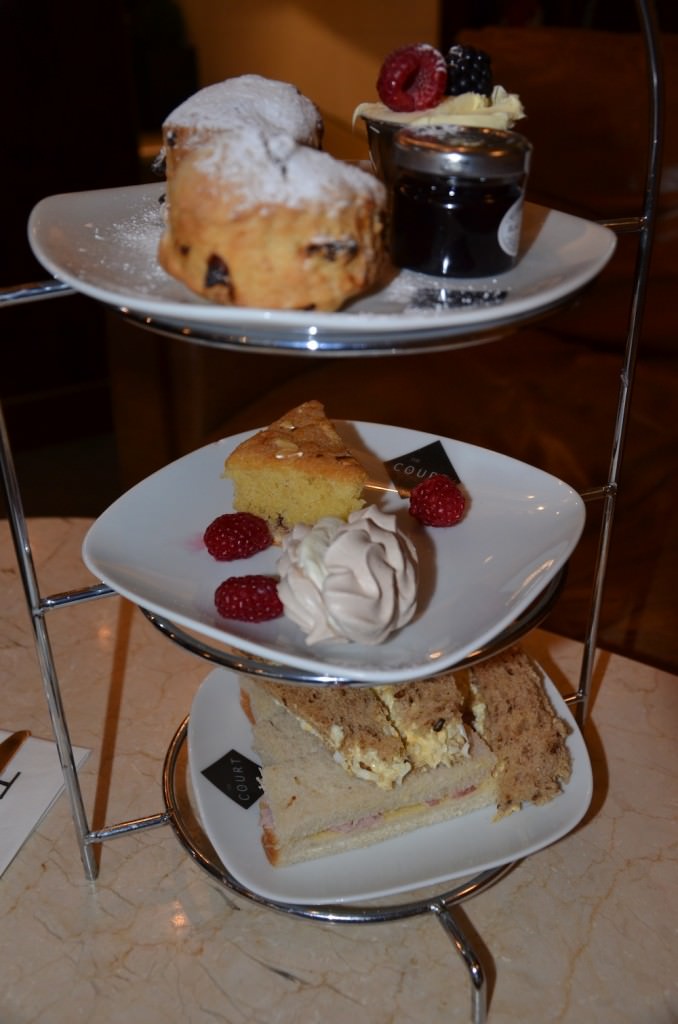 My high tea was served on a three-layered metal stand. Thick moist sandwiches (without crusts, of course) crammed with egg salad, asparagus, ham, and other deli treats.

It was served on a three-layered metal stand. Thick moist sandwiches (without crusts, of course) crammed with egg salad, asparagus, ham, and other deli treats. Warm, soft homemade raisin and date scones, lightly sprinkled with sugar powder, and with clotted cream so thick it forms a deep second layer on the scone. Lather some red strawberry or raspberry jam on top and you have bliss on a biscuit! 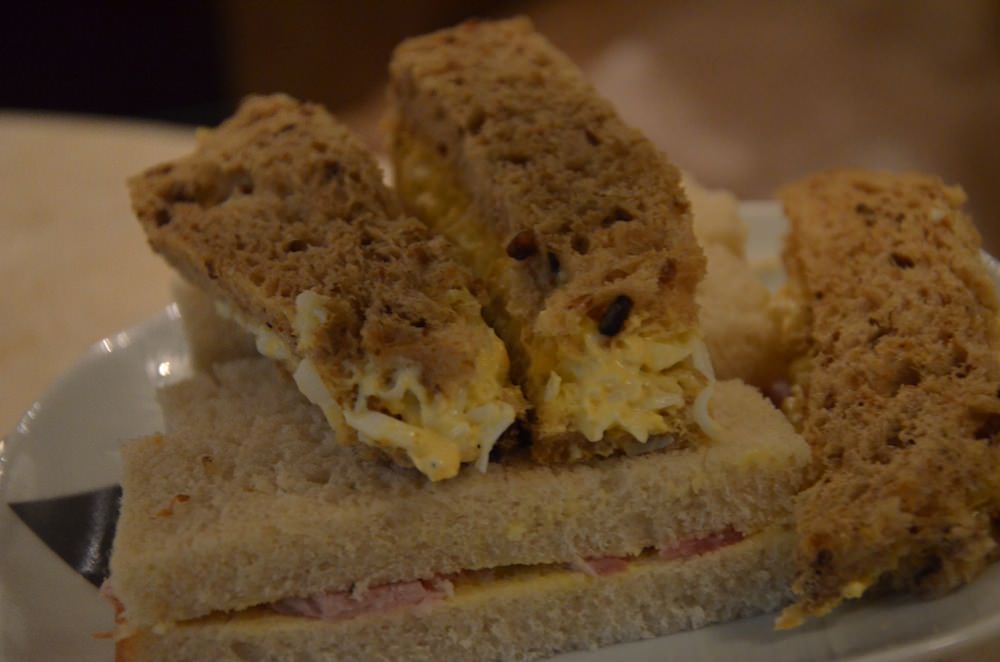 Typical finger sandwiches at an English high tea. They melt in your mouth!

Wash it all down with well-steeped English afternoon tea, served with cream and sugar, and nibble on homemade cakes and gateaux that you dip in the pile of cream—all for 14GBP. Numerous cafes in York serve high teas, so ask around.

While we’re on sweet things, I’d be remiss if I didn’t mention the York’s Chocolate Story on King’s Square. Now established as a bona fide tourist attraction this tour takes you on a journey through the story of chocolate and confectionery in York. 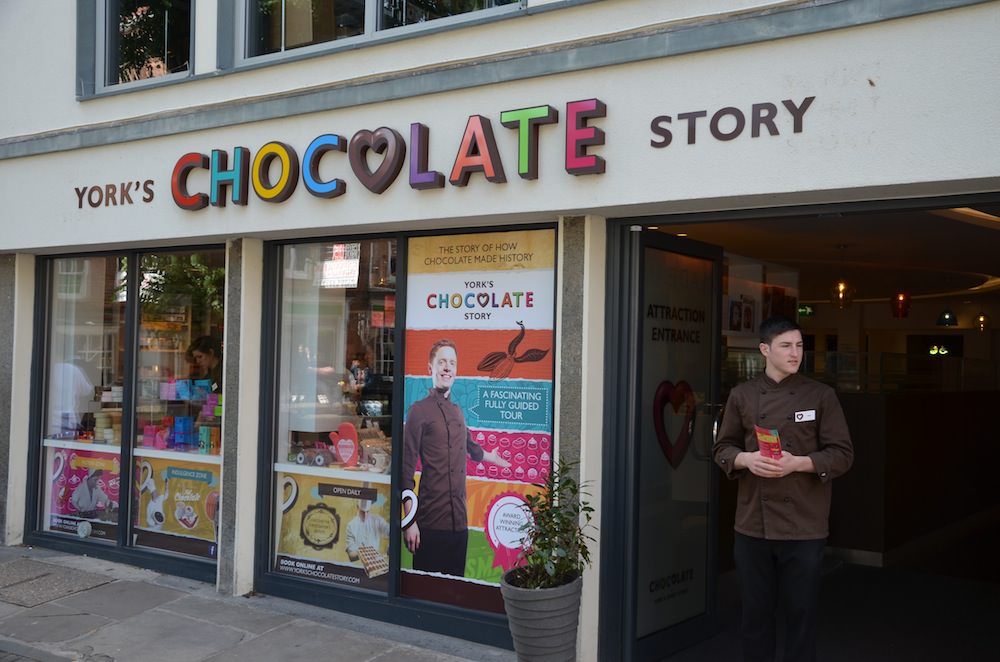 I’d be remiss if I didn’t mention the York’s Chocolate Story on King’s Square. Now established as a bona fide tourist attraction this tour takes you on a journey through the story of chocolate and confectionery in York.

Now, I don’t get as dewy-eyed over chocolate as some of my female travel writing friends do, but learning how chocolate is made from bean to bar, and hearing how York is the chocolate capital of England made it a fun tour. I have no hesitation recommending this to one and all, especially those with a sweet tooth. The samples they give out should take care of that.

This then, is my gastronomic tour of the beautiful city of York. From Cornish pasties to roast lamb, and from fish ‘n’chips to high tea, York will not disappoint the culinary tourist.

Written by and photos (unless otherwise noted) by Roy Stevenson  for EuropeUpClose.com