On my first trip to Ireland, I took a bus from Clifden on the west coast that I thought was headed to Donegal in the far northwest of the Republic of Ireland. (Un)Fortunately, I was wrong and the bus took me to Dublin where I enjoyed the Guiness Blues Festival for the next week. I always wondered how the trip may have differed had I stepped onto the right bus, because Donegal was and still is the most removed and therefore the most Gaelic of Ireland’s counties. 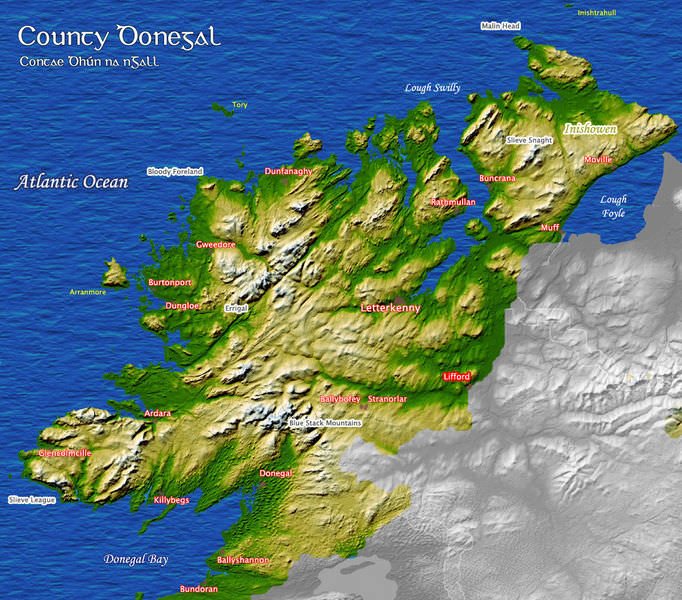 For Americans like me, it is the Gaelic heritage of heroic resistance and ancient ties to druids and faeries and legends that attracts us to Ireland — as much if not more than the emerald-green landscape, great beer and heart thrumming music. When I finally did make it to Donegal, I came to understand what “remote” and “removed” truly mean in Ireland. Donegal has the largest number of Gaelic speakers in Ireland as well as the greenest, most pristine mountains. It also has the highest cliffs in Europe-The Slieve League Cliffs, but only the intrepid few manage to make the trip to discover these wonders. Songs like the Hills of Donegal and word-of-mouth have ensured that visitors abound in the summer months, but Donegal still lags far behind places like Galway, Dingle and Dublin in terms of tourism. 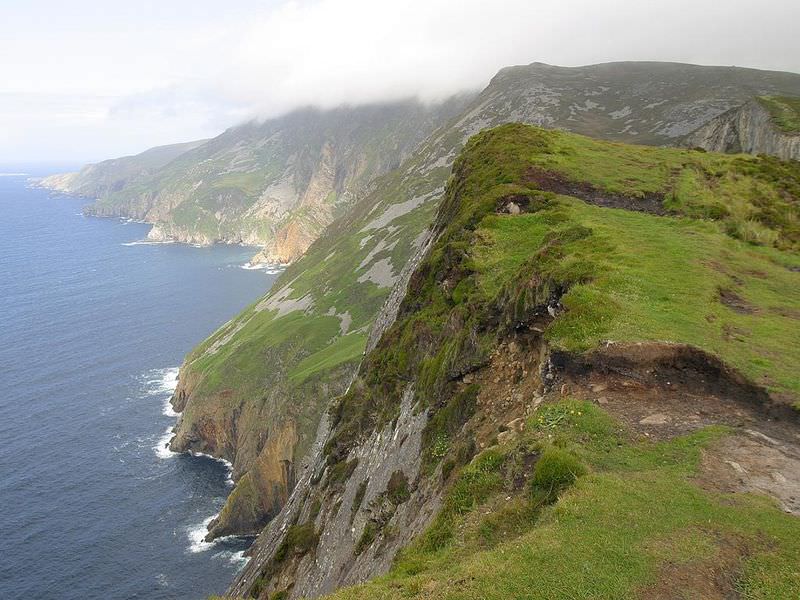 The historic Flight of the Earls truly exemplifies Donegal’s tragic glory: In September, 1607, the great lords of Ulster (of which Donegal is the largest county) fled their lands for the Catholic refuges of Spain and Italy in order to raise armies to defeat the English who had recently re-gained control of the island. The English took advantage of this escape and proceeded to settle Ulster with Protestant Scots. Thus, the seeds of sectarian violence were sown and violence continued until the Good Friday Agreement in 1998 helped to create a political solution to this century-old problem. So Ulster (and by extension Donegal) are the most Irish counties in Ireland, if one can say something like that, but today are called Northern Ireland and represent the last of England’s influence on Ireland. 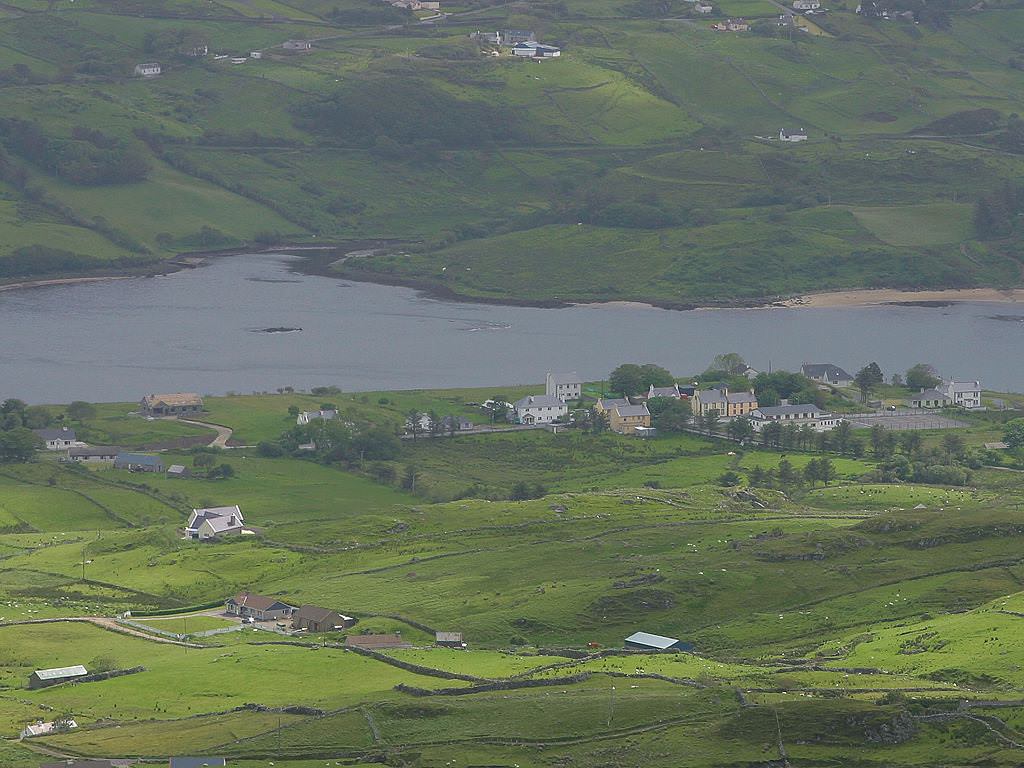 Donegal suffered the most after the Flight left her leader-less. Once the seat of the powerful O’Donnell clan, Donegal was relegated to the backwaters of Ireland as the North developed under English rule and the South under native Irish rule. Donegal, which is part of the Republic, shares just a few miles with her neighboring County Leitrim — most of the border is taken up by Counties Tyrone, Londonderry and Fermanagh of Northern Ireland. Due to this exclusion, Donegal has remained poor and isolated. The Great Famines of the 1800s hit Donegal particularly hard, reducing the population by almost half.

All this makes Donegal a paradise for the hiker seeking solace in the winds of the Atlantic, the lonely ridges of Donegal’s many cliffs, and in the hollow forts of the ancient Gaels. In terms of amenities and accommodations, both Donegal Town and Letterkenny serve well, with Letterkenny perhaps a bit more comfortable. But I believe Donegal is a place for hostels and backpacks and long walks without a word. Donegal is also a place for those dusk-time arrivals in a well-lit and cozy pub for a fat pint of stout and live music that pops up out of nowhere. I would almost recommend going in winter to accentuate the feeling of glory hidden from sight, blustery ghosts tugging at your sweater, and rains that drive one into a random B&B to listen to an old-timer tell you about that nearby castle crumbling slowly into the sea. 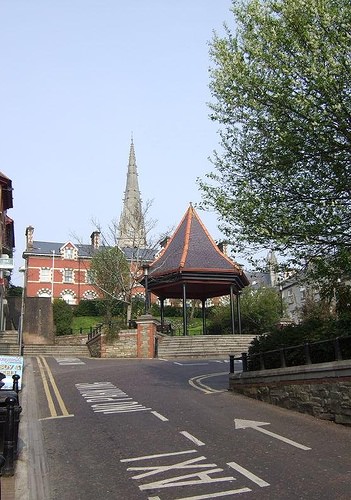 Some trips that are “musts” include a drive (or a casual walk over days) from Donegal Town to Carrick and on to the Slieve League Cliffs — this trip will demonstrate the wildness of Donegal’s coast and the beauty of the Atlantic and the cliffs. Another vital trip is a hike as far into the Blue Stack mountains as you can get, perhaps from Ardara to Lough Finn. Make sure to make it to Gweedore and use this town as your base for forays into the Gaeltacht (region where Irish is the first language) and into the Glenveagh National Park. From Gweedore you can follow the coastline around to Letterkenny and take in some of the history of the O’Donnel Clan while gaping foolishly at the views from the mountains of the inland down across the peninsulas. If you have anything left in the tank, then “finish” your trip by passing through historic Buncrana and looping around the Inishowen Peninsula — the most remote patch of mountain green in the Republic and Ireland’s northernmost point. 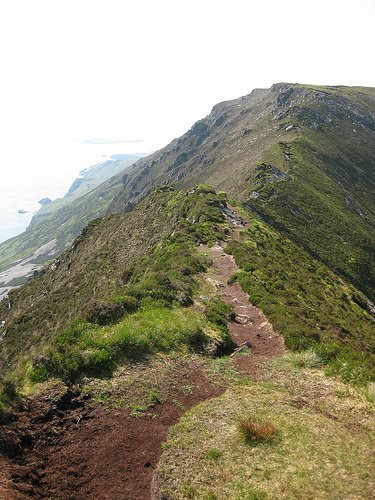 I suppose one could say that Donegal is the “real Ireland”, even though I am not Irish in the slightest, this is how I felt. The west coast of Ireland is breathtaking and beautiful and energetic; Dublin is a fun town with music coming out of its ears; the Causeway Coast is special and unique, but none match the “song” that is Donegal. If you go there, summer or winter, have hikes and walks at the foremost of your mind and perhaps music as a close second. Sure, these two are what anyone going to Ireland might think about, but I would just reiterate that Donegal’s hikes and impromptu concerts represent the no-frills real deal that is the inspiration for all of Ireland’s famous acts.

Here are some useful sites to help you plan your trip:

Hostels In Donegal
This site lists hundreds of hostels in the many towns of Donegal. When you plan your trip from Letterkenny out to the cliffs and peninsulas, this is a great resource.

Donegal Library
Here is a  brief history of Donegal, with links to the historical families of Donegal