It’s fair to say that sibling rivalry is usually the dynamic found in any county’s two most populous cities. One hogs the limelight with its trinkets and bells, while the other sits in the shadow and gets on with its day. If Amsterdam is the flashy older brother, Rotterdam remains Holland’s ‘can do’ city, a gentle, aesthetically edgy younger sibling that 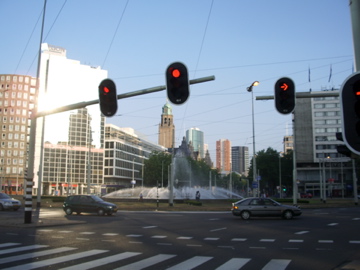 too often flies under the radar, markedly distinct from its big brother’s hedonistic, risqué reputation. Do a little digging, and you’ll quickly find that Holland’s second biggest city is a gem just waiting to be experienced.

I cross over the Belgian border on a train zipping past lush wet fields, dykes and canals, arriving to Rotterdam Centraal Station in the early afternoon. I find my way to a budget hostel nearby and to my great surprise, ‘Mafkees Backpackers’ turns out to be a defunct skate rink converted into a makeshift accommodation facility. My first night in Rotterdam will be shared intimately with seventy sleepers in one cavernous, roller-skating rink-dormitory. 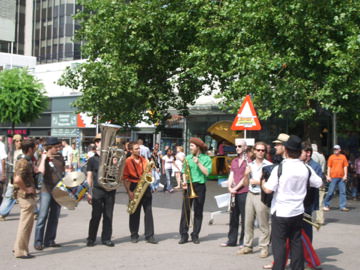 It is a glorious, balmy summer day in Holland. Cyclists line the side-lanes slicing in swathes towards the town center. It seems that everyone here gets around on two wheels, a convenient way to move around the city with ease, every street sporting purpose-built bicycle lanes. I find my way into town, by way of the Lijnbaan and the Hoogstraat, the main mall walkways of town. Rotterdam is the most multicultural city in Holland, with 50% of its residents originally natives of other countries, and in the town’s heart, a melting pot crowd of locals and tourists mill by food stands and stores, enjoying the melodies of a brass band performing traditional Dixieland in the roasting summer sun.

Rotterdam is perhaps most significant and best known for it’s remarkably edgy architectural style. In World War II, the city was subjected to considerable destruction by the German Luftwaffe. The ravaged city, left largely in ruins, began to be rebuilt throughout the 1950’s and 1970’s, and a concerted 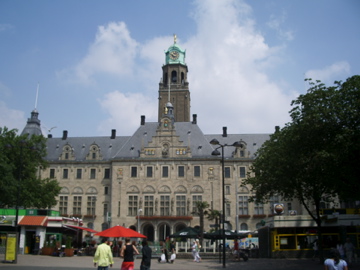 “can do” ethic and dynamism emerged to create a brand new, uniquely livable city. Rotterdam today glitters with a completely modern skyline and sleek, nouveau aesthetic. The imposing cable-stayed Erasmus Bridge stands as testament to the Rotterdam vision, a domineering modern structure linking the northern and southern halves of the city.

Ultimately, Rotterdam is a curious mix of the Holland of old and the uber-modern. Part of the city’s post-war vision can be found in it’s dedication to high art and cultural monuments. Rotterdam’s modern art and natural history museums are well appointed and veritable. Museum Boijmans Van Beuningen, the Chabot Museum, and the Maritime Museum, a nod to city’s the seafaring port history, are all well recommended for the curious knowledge seeker and art aficionado. For a 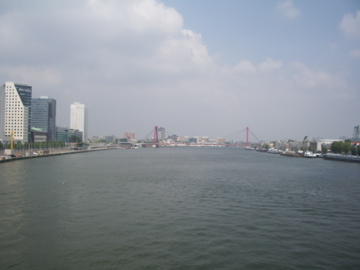 slice of the old, be sure to check out some of Rotterdam’s sacred structures which were untouched by the war. Most notably, the Town Hall and the Grote of Sint Laurenskerk, are the oldest structures in town, dating back to 1449.

Rotterdam is an inviting city to roam on foot, and I soon find myself exploring the older-style Northern districts along leafy, cobble-brick lanes, and lush green reserves decorated with endless canals. Customary Dutch coffee shops and cafes straddle the patchwork-brick streets and alley, as neighborhood locals, relaxed and content, smoke cigarettes and swill ice-cold beers in the sun. It is a mellow scene, and a comforting insight into the natural vibe of the city and the rattle and hum of its inhabitants.

As a rich golden sun begins to set, it’s a romantic scene by the Old Harbor, where a decadent array of cafes, bars and 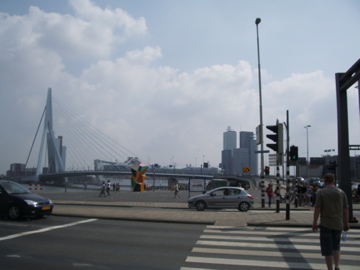 brasseries hum with conversation and activity. And not far from this memorable place is the impressive 10-story  “Het Witte Huis”, the first skyscraper of Europe (built in 1897). I sample some of the local brew, and soak up the twilight scene and nod my head to the humility of an unexpectedly pleasant Dutch gem.

Without doubt, the nation’s well-behaved younger sibling, Rotterdam, is a completely unique experience to anywhere else in Holland, a sensible, pleasant, desirable spot, and a sweet Dutch slice of both the old and the new.

When I traveled Europe (21, female and alone) I avoided Amsterdam since I wasn't quite sure if I wanted to go there by myself. Sounds like Rotterdam would have been a good alternative.