The medieval cathedrals of northern France are marvels of craftsmanship, designed and created with incredible skill. Centuries later we still gaze at them in awe. Four that I find remarkable are in Strasbourg, Tours, Bourges and Laon. And for more even more beautiful cathedrals, you should read this post about the most beautiful churches in Europe.

The Cathedral of Our Lady of Strasbourg, in Alsace, was the world’s tallest building until 1847. At 142 meters (466 feet) high, the pink sandstone structure can be seen for miles. It’s considered a Gothic masterpiece of the 13th century, worked on by craftsmen and stonemasons who had helped build the magnificent cathedral in Chartres. It was financed by the local prince bishop and moneyed citizens. Erwin von Steinbach, a revered name among cathedral-admirers, designed the elaborate west front, with its thousands of carved figures, and main entrance. (It’s said that he was so dedicated, he gave his horse to the cause, since he had no funds to donate.)
The cathedral is filled with treasures: carvings, statues, tapestries, gorgeous stained glass windows, murals, and the famous astronomical clock. The mechanical clock, a 16th-century Renaissance piece, shows four stages of life passing by the figure of Death, while apostles move before Christ, a rooster crows and birds cuckoo. The clock tells solar time and the phase of the moon, the day of the week, the month, the year, zodiac signs, and more. Back in 1788, the clock stopped working and no one knew how to repair it until a self-taught watchmaker and math professor came along. Jean-Baptiste Schwilgue spent 30 years on the clock’s mechanism and finally, in 1842, got it working again. (A tip: large crowds come to view this clock, so arrive at least by noon if you want to see the complete action, which is set in motion every day at 12:30.) 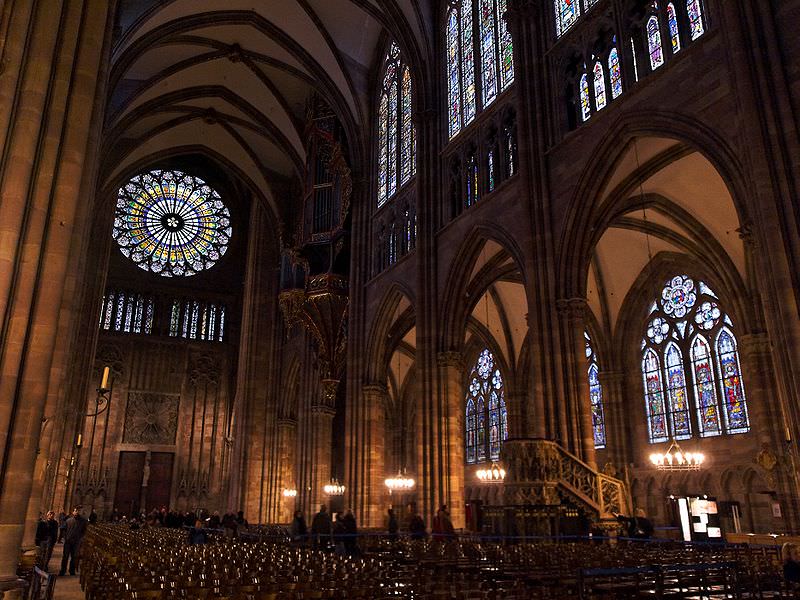 Strasbourg Cathedral has been attacked by war and time’s changes, but always recovered. During World War II, the precious stained glass was removed, stored in a salt mine, and later returned to the cathedral by the U.S. military section that dealt with monuments and fine arts. Strasbourg Cathedral is open daily except Jan. 1, May 5, and Dec. 25. There’s a charge to see the full clock animation. 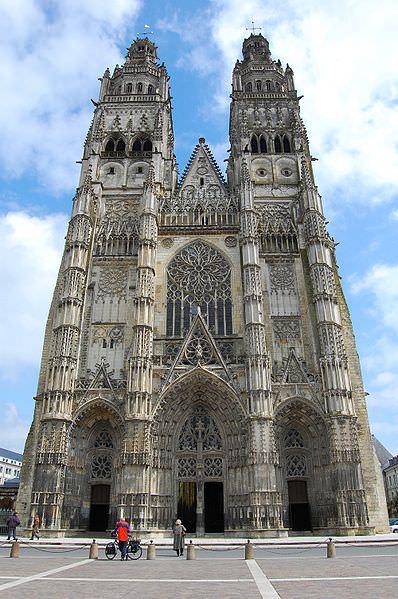 The Cathedral of St. Gatiens, in Tours, took a long time to build and so illustrates the various types of architecture used between the 13th and 15th centuries. The buttresses are Romanesque, the decoration is Gothic, the intricate façade is Flamboyant Gothic, and the tower tops are Renaissance from the early 16th century. It’s a mixture, but it all works in a massive, awe-inspiring way. Flamboyant is an accurate word for much of it.
Tours, the largest city in the Loire Valley, had religious significance from early on. St Martin was a much-loved bishop in the 4th century and a patron saint of France, and medieval pilgrims came from far and wide to see his relics on display. Another bishop, Gregory of Tours, was a church historian in the 6th century. Long before either of them came St. Gatien (Gatianus), the cathedral’s namesake, who was sent from Rome as an early Christian preacher.
St. Gatiens Cathedral is known in good part for its 13th-century stained glass windows. They really are glorious, with their delicate tracery and brilliant colors, especially when light streams through.

In Bourges, Cathedral St-Etienne is another example of stained glass windows at their finest. Those glassmakers seven centuries ago were true masters of their craft. The scenes are from the Bible and lives of various saints, martyrs and prophets, but you don’t have to know the stories to appreciate the prisms of light and color that play across the high stone walls. They are beautiful. This cathedral, with its thick walls and flying buttresses, is also known as a great piece of early Gothic architecture. It’s a UNESCO World Heritage site, noted for its harmony and unified design.  Adjacent to the cathedral, and a contrast to it, is the Bishop’s Garden. It’s a pleasure to stroll here among the formal plantings and paths. The cathedral is open daily, 9 to 7. A small fee is charged to go to the upper viewpoint.

Notre Dame Cathedral of Laon, in the far north region of Picardy, was a major stop for medieval pilgrims on their way to Santiago, Spain. It’s not a common destination for tourists today, but well worth a visit. The Gothic architecture shows some of the best of medieval design. There are six ornate, light, airy towers (four completed) adorned with statues of oxen, a tribute to the animals that provided labor in the construction. (There’s a rhinoceros gargoyle, too, though it was probably added later.)  At every turn you notice something intricate –finely carved portals, an 18th-century choir grille, a rose window dating from 1210. The rose window is as purely Gothic as the one so admired in Notre Dame of Paris. The white stone of the cathedral’s interior gives the walls a brighter, lighter tone than you see in many more somber churches.

Construction began around 1160 and was completed in 1230. After that, side chapels were built and other additions made over the years until the upheaval of the French Revolution, when much was damaged and statues were destroyed. In 1840 the cathedral was classified a Historical Monument and a full restoration began that was finally finished in 1914. Despite all the bombing and shelling of World Wars I and II, the cathedral was unharmed. It’s open daily, 8:30-6:30. A fee is charged for tours, but they’re free on weekends from Easter to October.

Editors Note:  We invite readers to comment with their own Northern France “remarkable cathedral’ candidate.