Real Madrid is arguably the most famous football club in the world. With nine European Cups and thirty-one domestic championships, the club is among the most decorated in Europe. At its 85,000-seat ground, the Estadio Santiago Bernabéu, Madrid have an entire museum devoted to the awards, trophies and heroes of the club. 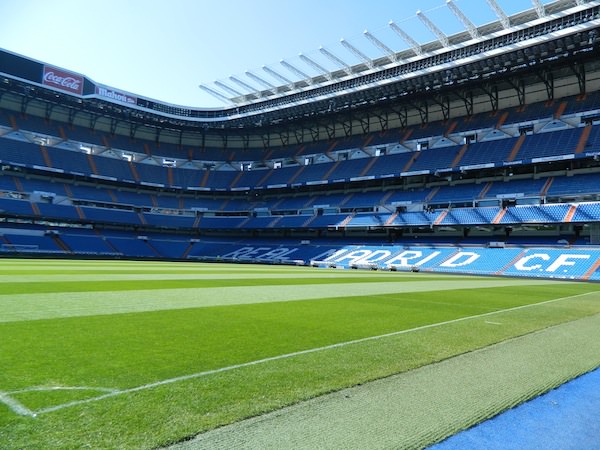 Given the dramatic history associated with the club, particularly from the 1950s onward (Real Madrid won the European Cup five consecutive times from 1955-60), one centralized location for the collected physical items of the club’s past is quite a treat. For €16, visitors can take a self-guided tour of the stadium that begins in the massive museum.

The museum begins with a general approach to the club’s history as uniforms, shoes, balls and two-dimensional items like tickets, programs and rulebooks allow visitors to view the club’s story by era. Other sports are also showcased in the first display as basketball, handball, volleyball and other sports have jerseys and trophies to peruse. 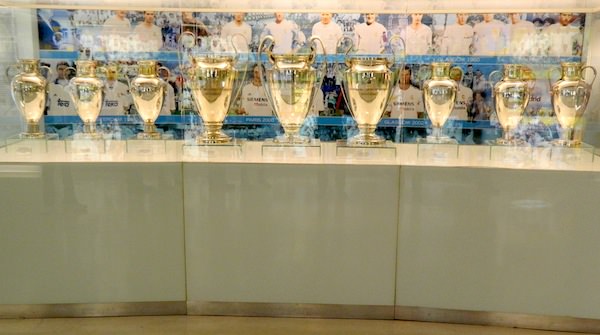 Trophies Displayed at the Madrid Real

Moving inward, the museum highlights trophies won in lesser tournaments, often regional competitions, over the century of play. Uniforms are displayed on mannequins to denote some of the most famous non-Madrid players to have visited the Bernabéu since its construction in 1947. The club highlights the players who have come from all over the world to play for Madrid, as well, in a display cleverly entitled Campeónes del Mundo (World Champions).

Continuing deeper into the museum, every player to have ever appeared for Madrid is pictured on a massive hallway of photographs. Next comes the largest trophy room with all nine European Cups together in one large case. Surrounding the most impressive part of the museum are individual exhibit cases with uniforms from both teams in each of the nine Cup-winning games as well as other memorabilia from those most famous of days. Before exiting the museum, fans and visitors alike can have their picture taken with the club’s most recent Copa del Rey (King’s Cup – Spain’s domestic tournament). 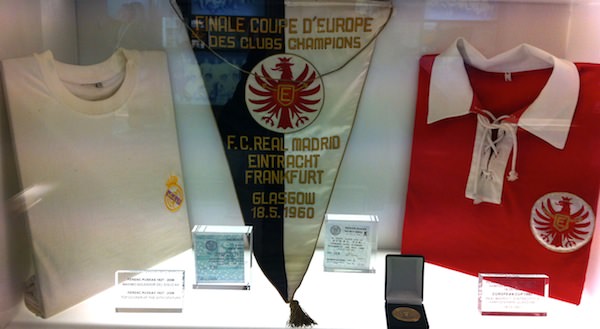 Touring the stadium itself, a five-tiered, fully enclosed ground, is just as fun as the museum. Vantage points start at the highest points in the stadium and lead eventually to a seat on the bench. Views are accessible on three of the four sides of the stadium and at four of five levels, giving a more complete perspective of the famous ground than would be possible even attending a game. After winding toward the lowest level, the tour allows for a view from the pitch. After enjoying the comfortable seats on the bench, visitors descend into the players’ tunnel and finally into the spartan visitors’ locker room.

While many stadia in the world provide tours, very few offer the level of intimacy allowed at Real Madrid. For one of the world’s most famous clubs to provide such access is a testament to their greatness. 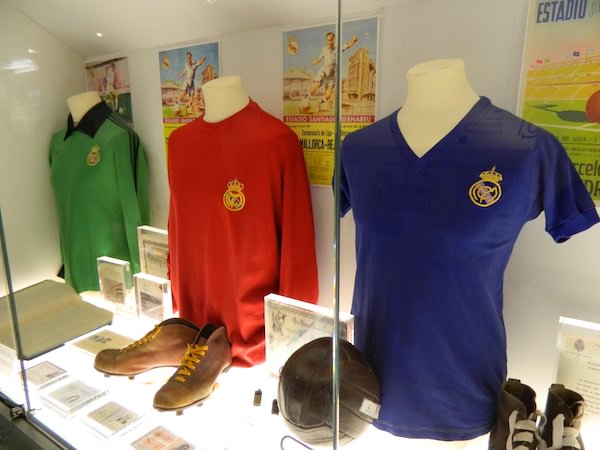 Uniforms Displayed at the Real Madrid

Tours of the stadium are available every day of the year (except Christmas and New Years Days) from 10:30am-6:30pm and until five hours before a match on game days. The stadium has its own metro stop (Santiago Bernabéu), which is accessed via Line 10.

Real Madrid’s local rival, Atlético Madrid, also has a museum and stadium tour. While not nearly as extensive, Atlético offers historic uniforms, trophies, photographs and more. The museum is open Tuesday-Sunday 11:00am-7:00pm at a cost of €6. Guided tours of the Estadio Vicente Calderón operate several times each day at an additional cost of €10. The stadium is easily accessible via the Pirámides metro stop on Line 5.

Written by and Photos by Michael Orr for EuropeUpClose.com