Halfway through a four-day gastronomic tour of southern Puglia, we were struggling to digest the experience.  At least I was, as the only one in our group who was not in the food business as a sommelier, restaurateur, or wine journalist.

At this point we were in a gently rocking fishing boat off the shore of Gallipoli on the Ionian Sea, perfect weather on a late May morning. “If you want to eat fish today, you have to catch it yourselves,” our host Aldo informed us. 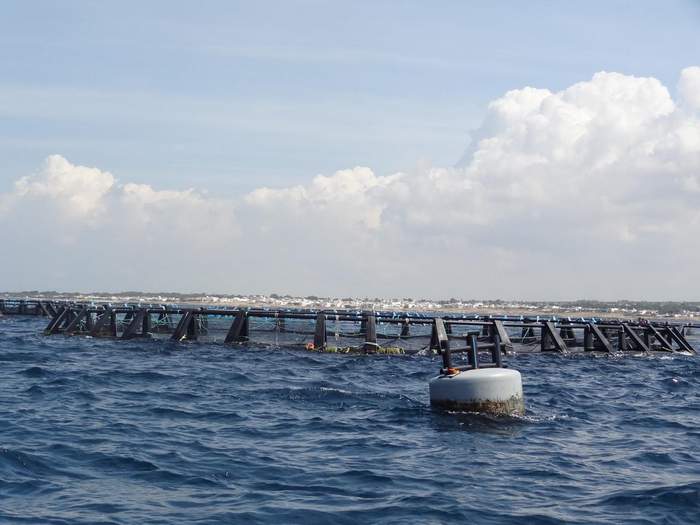 We could jump into the open-ocean net pen floating alongside our boat, brimming with sea bass and sea bream, and try to catch some barehanded. (It was owned by Aldo’s family as part of their fish farm operation, InMare). Or we could take a rod and try to hook something conventionally, with the help of a fisherman on board for that purpose.

None of us landed a fish with our hands, though several were successful with tackle and bait. For those who came up empty on both counts, fish stockpiled by InMare assuaged our appetites when we gathered for a seaside banquet a few hours later.

“Fish” was one of five themes of our gastro-tour in Puglia; the others were wine, cheese, pasta, and chocolate. Add to that a setting on Italy’s heel, with its 800 kilometers of shoreline, Greek history, Roman ruins, medieval artefacts, baroque architecture, and modern sensibilities, and a trip to Italy’s boot becomes an experience for all the senses.

We began in Brindisi, a port city named for the shape of its harbour (from the Messapian word brunda, meaning “head of a stag”). That “brindisi” also means “toast” in Italian – the clinking of glasses, not the bread – suggests the fun-loving, light-hearted atmosphere of the place. Amid cafes and restaurants lies plenty of history, including Roman columns marking the end of the Via Appia, launch point for Crusaders to the Middle East. These are located on the Piazzetta Colonne, at the top of the Scalinata Virgilio, named after the poet Virgil who died in Brindisi in 19 BC. The twisting cobblestone streets pass convents, temples, and gates of artistic and architectural significance, all leading to the splendid “Via del Mare”, a wide walkway between the medieval town center and the Adriatic. 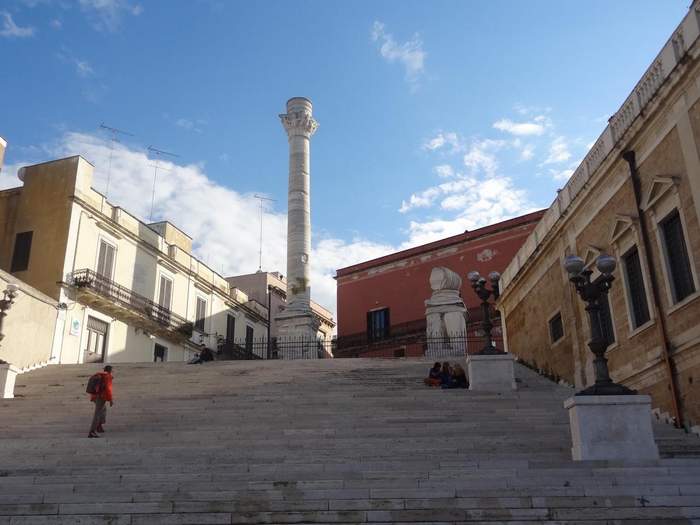 The Vergilio steps in Brindisi mark the end of the Appian Way.

Our first visit was to the Masseria Altemura in Torre Santa Susanna, half an hour southwest of Brindisi. (Transparency disclosure: this masseria is part of the Zonin wine family, sponsors of our trip). The winery’s 150 hectares showcase two of Puglia’s leading grape varieties – Primativo and Negroamaro – with five IGT wines and one DOC among its offerings. It is the largest vineyard in Puglia, producing 150,00 bottles a year. 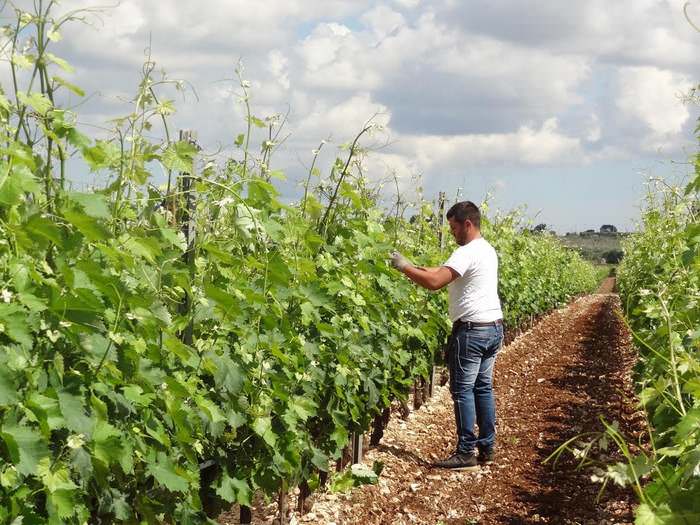 Curing the crops at Altemura vineyard in Salento

Some of the structures housing the winery’s cantinas and tasting rooms date back 500 years; they have been redone in stylish rustic fashion by the Zonin family. A visitor may join an impromptu tasting and the opportunity to buy wine at competitive prices, but advance notice is better: by pre-arrangement a group of 10 or more can enjoy a tour of vineyards, cantinas, a structured wine tasting, and a fabulous meal prepared by women from the local community (cost of the latter: about €20-25 per person, including wine). An optional lesson in making orrecchetti is also available, though discouraging: it’s a lot harder than it looks to pummel flour and water into earlike shapes. 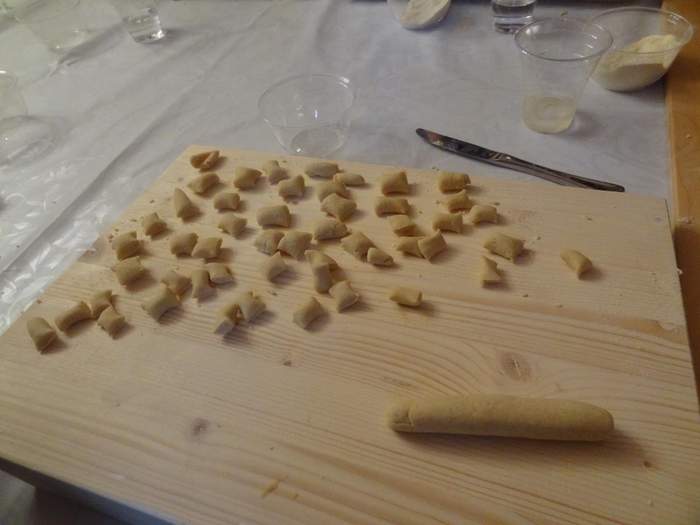 These will become orrecchetti? No way

Our cheese encounter was with Casearia del Levante in Ceglie Messapica near Salento. The artisanal operation produces two typical local cheeses – Asquanta (a spreadable cheese) and Caciosalento, a classic made from ricotta and available in seven versions.

The milk used to produce both these cheeses comes from the Casearia’s own cows, which are treated more humanely than high-volume industrial operations. Owner Francesco Gallone is proud to show off his animals, and even more excited about the manure conversion system he installed recently 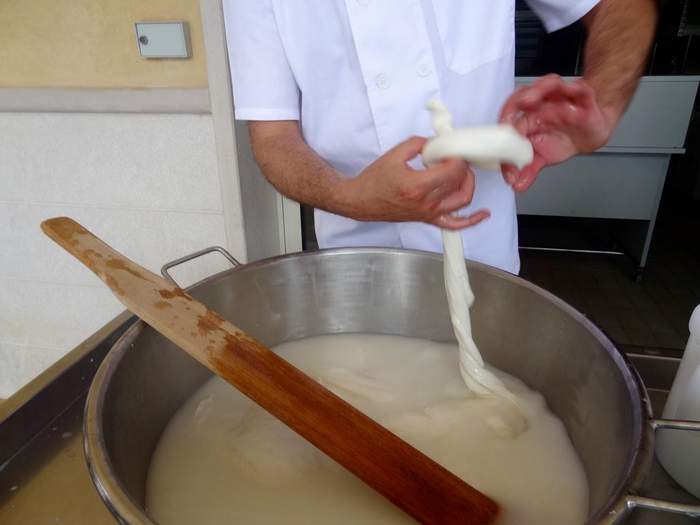 “Pulling” mozzarella to the appropriate consistency is an art.

Along with the tour and tasting, we had the opportunity to watch mozzarella being “pulled” while it was still warm. The technique is as challenging as making orrecchetti but you don’t have to wait to taste the results. Our group decided that just-pulled Pugliese mozzarella was as delicious as its more famous Campana cousin. 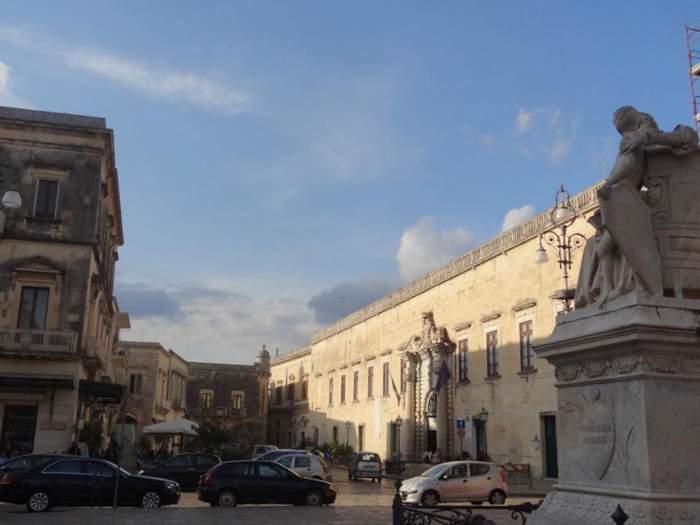 The second morning saw us jumping into the sea near Gallipoli. Back on land, we found ourselves in Maglie for the next two days. Maglie is right at the heel of Italy’s boot, with a population of 15,000 and an unexpected attraction nearby: a botanical garden with one of the largest collections of cactus in Europe. La Cutura Giardino Botanico in Giuggianello (Lecce) is privately owned by Salvatore Cezzi and family. Mr. Cezzi transformed an 18th century country estate into a 35-hectare garden with more than 2,000 varieties of cactus, some found nowhere else in Europe. 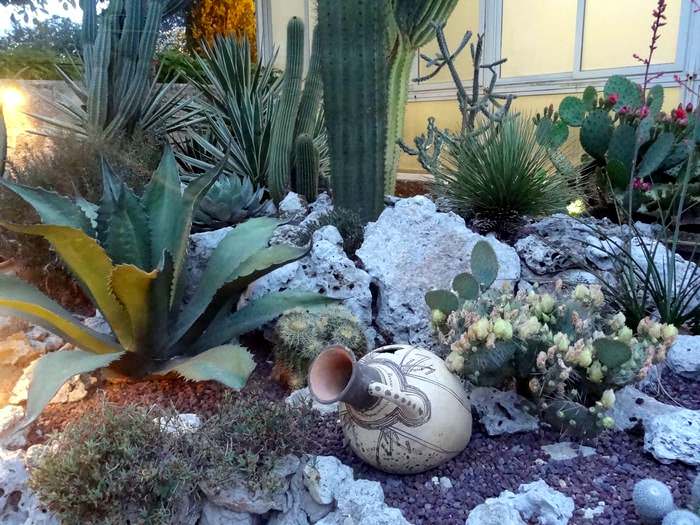 La Cutura – one of the largest cactus collections in Europe, found in southern Puglia

You can tour the gardens anytime during open hours. If you are a group of 10 or more and arrange in advance, you might ask for Mr. Cezzi himself as your guide. You will need a translator into English, but his passion, enthusiasm, and knowledge of his creation won’t require translation.

Maglie also has two gustatory claims to fame — a pastificio (pasta factory) and a cioccolataio (chocolate maker), both of international renown. 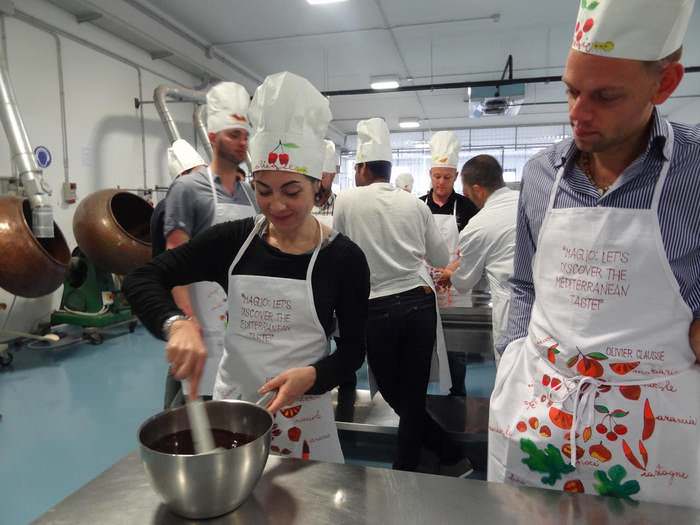 The Pastificio Benedetto Cavalieri has been making traditional durum wheat pasta in Moglie since 1918.  At the reception area for the company’s headquarters, visitors are invited to watch a video about Cavalieri. Viewing helps you appreciate the value of “delicate drying” in pasta production compared to the supermarket variety. The latter dries in three hours; Cavalieri products take one to two full days. If you make arrangements ahead of time, you may be able to tour the production area. This is not recommended during summer months though because it’s hot up there! 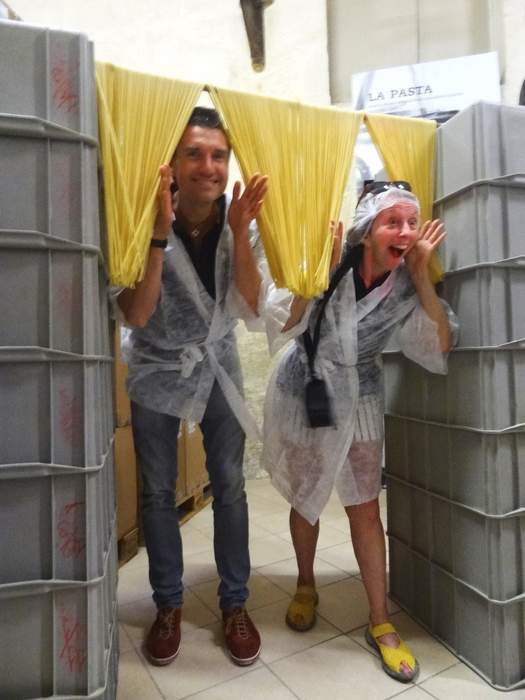 Peekaboo from the pasta curtain at Pastificio Bendetto Cavalieri: Lorenzo Zonin of the eponymous wine family and journalist Claudia Flisi

The Maglio family has been making fine chocolates in Maglie for 140 years. The Maglio Arte Dolciaria showroom on the outskirts of town displays the company’s full range of products, including cookies, dragées, and hazelnut spread. They are best known for their dark chocolate bars ranging from 60 to 81% cocoa, with single plantation origin specified. By prior arrangement in non-peak periods, a group of 10 or more can tour the production facility, indulge in a tasting, or perhaps take a lesson in creating their own mini-chocolates (for a fee). 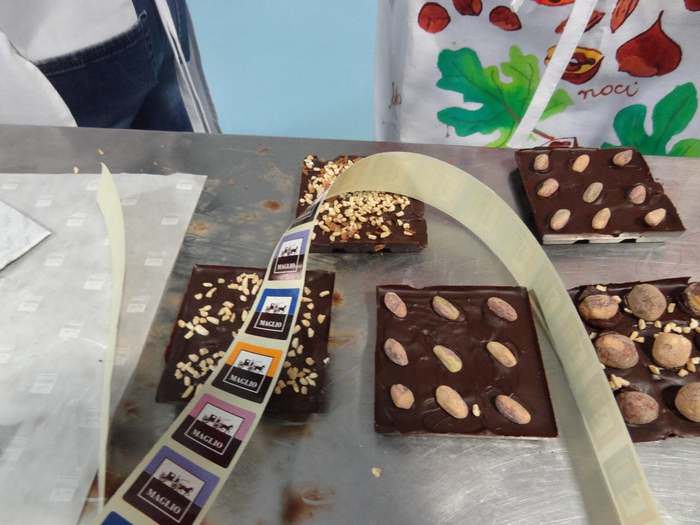 The chocolate class at Maglio includes wrapping, labeling, and of course tasting

Every day in Puglia, after the sensorial onslaught – historical sights, sounds of two seas, smell of melted chocolate, the touch of raw pasta in your hands, and the tastes (oh the tastes!) of everything on your plate and in your glass — all you can do is crawl into the comfort of a quiet bed and ready yourself for the next day’s assault. Where to do so is the focus of my next post — Puglia: Where to Sleep on Italy’s Boot 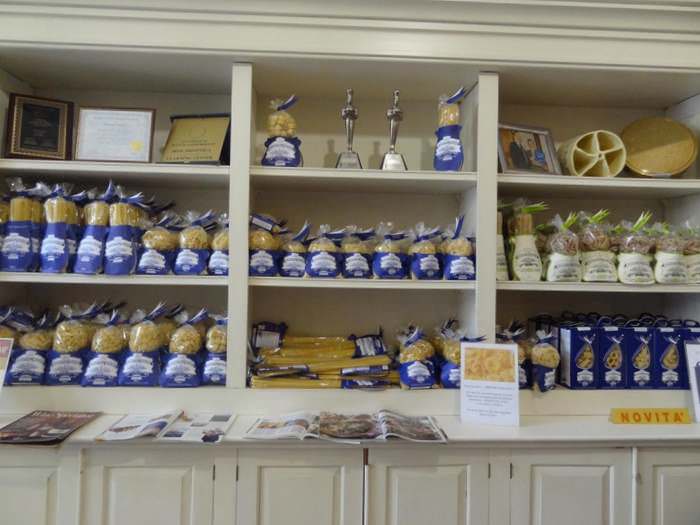 Some unique pasta shapes on sale at Pastificio Bendetto Cavalieri

I only wish I could have sampled some of those culinary delights myself. Short of that, you certainly made my mouth water. Puglia, here I come!