It’s not happenstance that Marseille is an ideal base for exploring Provence. We love to take day-trips from Marseille because the Romans built roads from here in all directions, which the modern-day routes often follow. 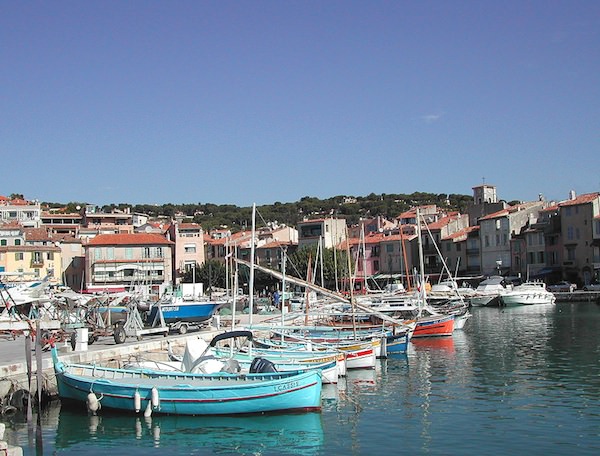 My husband and I have made use of these Roman routes many times as we explored the Provencal countryside. We’ve developed a system for our expeditions: we leave before 7:00 a.m. and travel the back roads on our outbound trip, stopping often along the way for breakfast, coffee, and photography. After spending as long as we need at our destination, we return to Marseille on the nearest Autoroute (freeway), which usually takes less than half the time of our outward journey. The Autoroutes allow us to undertake quite long distances on a day trip – 100 miles each way is feasible with two drivers – and we still get back in daylight in the summer months.

But you don’t need to go so far from Marseilles to see the real Provence or enjoy cities like Aix en Provence or Avignon. And the Mediterranean is close by with picturesque fishing villages and beaches such as Cassis.

However, a drive further north takes you into the Luberon to Lourmarin, Bonnieux, and the exquisite “perched villages” of Lacoste and Ménerbes; tour further northwest and you reach Gordes and Senanque Abbey. To the west lies the Camargue, home of wild horses and black bulls – you won’t see it all in a day, but it’s better than not going. You can get to Chateauneuf du Pape and Gigondas on opposite banks of the Rhone for sublime wine tasting or head northeast to Moustiers Sainte-Marie and the Verdon Gorge. Every road you travel ensures Provence will capture your heart. 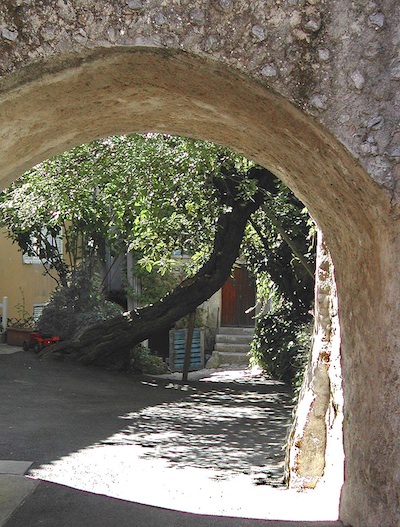 Our only difficulty is choosing expeditions. Even after twenty visits to Provence, we still have places left to discover and wines to taste. In 2011 we did an overnight trip to the Camargue and several day trips; one short drive, for example, took us via Signes to Evenos, a tiny village high on an ancient volcano northeast of Toulon, and home through Le Castellet.

Signes is not a tourist destination. It’s a working village that lies in a ribbon southeast of the Ste-Baume Mountains. We parked in the main square, and had fresh croissants for breakfast at the local bar-tabac that had just opened. Some locals were already having their first pastis of the day inside, but we ate outside watching the village awaken. We investigated the narrow streets of the older section, passing under stone archways and through little courtyards of old stone houses, many sporting unusual door knockers. We found several fountains, one dated 1570, and Signes’s lavoir. Lavoirs are a common sight in old villages; they were public pools for washing clothes, often built near a spring. In Place de Marché, we gazed at an enormous plane tree, which is a national monument thought to be 250 years old.

We backtracked to reach route N8 leading to Evenos that passes the famous Formula One race track. This good road switchbacked through rocky hills forested with Pin Pignon and scrubby oaks until we turned on D462 and then into a lane. The township of Evenos is actually three 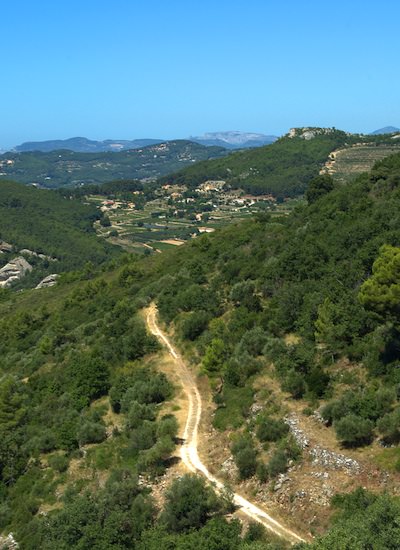 hamlets: Ste-Anne-d’Evenos, Le Broussan, and Evenos, separated by gorges. It was Evenos, where we had reserved a table for lunch, that has the medieval castle and panoramic view of the region I so wanted to see. Up at the viewpoint just before the village entrance, we saw the Mediterranean and Toulon nine miles away through the heat haze. The land here is rugged: mountains with massive rock outcroppings and narrow forested valleys. The scar of a disused marble quarry slashed a hillside and a few Provencal homes clung to the steep slopes. Fortified Ste-Anne-d’Evenos across the valley, stood guard above its new village.

I turned into a street so narrow I could spread my arms and touch the walls on either side. We visited the only shop in Evenos, Ló Tentic, which sells a selection of good local products. Its stone walls were five feet thick – I measured! I also counted only a dozen tourists over two hours.

Back in the sun, tiny cottages were tucked into the walls of the castle, their tiny gardens a froth of color. Looming above me was a castle tower. It looked like some huge rocky plant growing out of 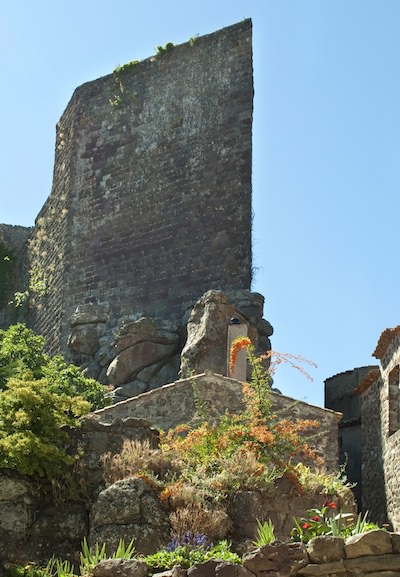 the boulders at its base. Thinking it a perfect defensive position, medieval lords had built Evenos in the 9th century on a basalt pinnacle. Although the surrounding terrain looks impenetrable, attackers sacked Evenos frequently, and by the 11th century a more robust castle with a second set of walls was urgent. It is this later castle that visitors can walk around but not enter. A path traces where the outer walls once stood and leads to the south side of the castle where there is a better view of the ruins.

Evenos was settled by the Romans and visited by Crusaders and Knights Templar. It is from this rich history that the legends, miracles, and superstitions of Evenos flow. There are many, but as I stared at the castle ruins I remembered the Lady Sybille. Married to a harsh lord, she fell in love with a minstrel at her court and her husband caught them in flagrante delicto when he returned unexpectedly during a storm. After stabbing the minstrel, he threw him over the walls. Sybille hurled herself out of a window in despair and ever since has walked around the White Tower on dark, stormy nights. Sadly, for us it was a sunny noon and Sybille’s ghost did not materialize. We left her in peace to visit the fortified Romanesque church on our way to the only restaurant in Evenos for lunch, La Voute (The Arch). 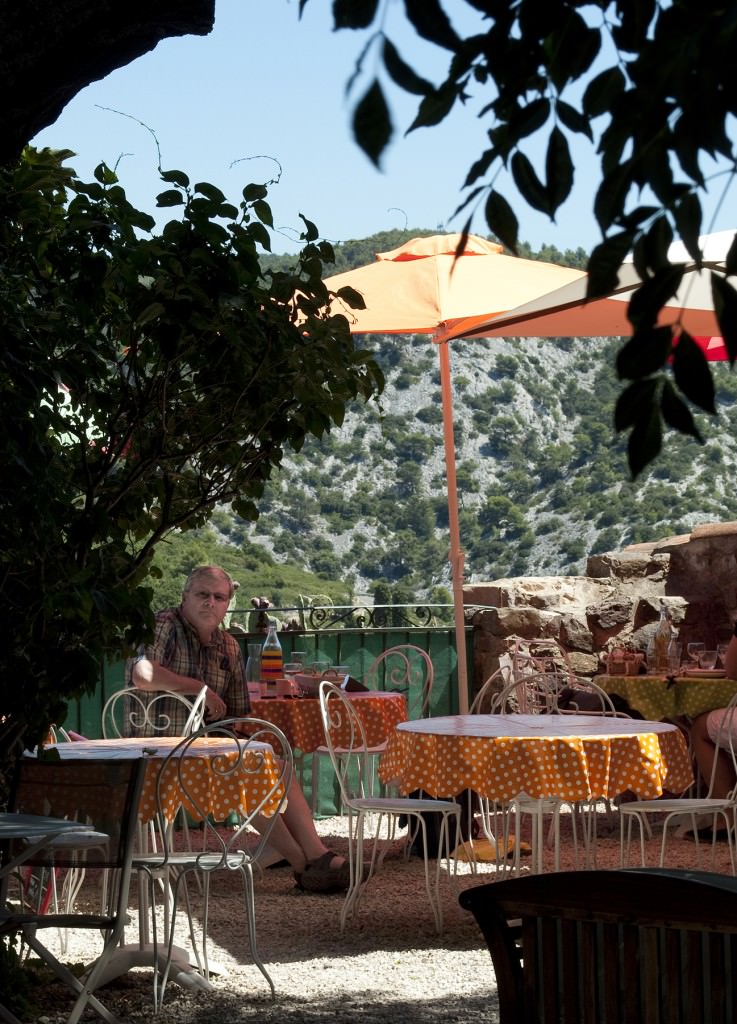 La Voute can squeeze about 16 people on the terrace, which is on the edge of a 1500 foot gorge. We took a table right by the railing and looked down on terracotta roofs way below. Chickens with white pompoms on their heads scratched around the seats as the tables filled quickly. The prix fixe, country-style menu offered two choices, and we ate the fried brie salad and prosciutto with a pichet of Bandol rosé. The fromage blanc on a bed of warm apple slices made a perfect ending.

Le Castellet beckoned. Not far from Evenos, it’s a major tourist attraction. I’d been before but enjoy its lively ambience and I wanted to shop. This beautifully restored medieval village perches on a hill above the vineyards of the Bandol and Côte de Provence appellations. We entered through a gate in the old walls where stone houses that line the cobbled streets were draped with wisteria and ivy. We wandered through boutiques and artisans’ studios and admired local pottery, leather goods, and jewellery. Good restaurants lined the small squares but we chose a shady café tucked in an out-of-the-way corner for lavender lemonade. 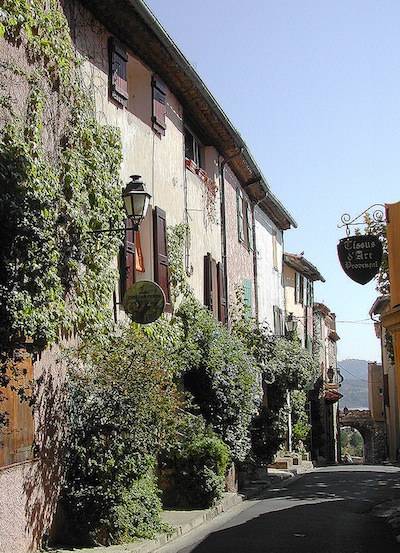 On our way back to Marseilles, we nipped over the Autoroute to visit the huge wine cooperative of La Cadierenne that lies on the other side. We lingered long over our choice and bought several varieties of Bandol wine to sip while planning our next day-trip from Marseille.

Jamie: Thanks for your response to the post on Provence. While I know Provence very well, I have never stayed in hotels or B&Bs here. We are most fortunate and house-sit for friends in the country close to Aix. I suggest that you ask Europe Up Close - Terri Fogarty - as she is the expert on France! Bon voyage!

Thanks for the article! Any advice on a picturesque village to stay overnight later this month? We want to be within 1/2 hour (maybe up to an hour) from Marseille because my husband is swimming in a race there. I would prefer to avoid city lodging. Any ideas would be great! Thanks! :)

Here are two towns I love that are close to Marseilles: Cassis and Aubagne. There are lots of hotels and B&Bs in Cassis...a completely charming town. Here is an article about Cassis https://europeupclose.com/?s=cassis In Aubagne, I recommend staying at la Royante

Where to Stay in Marseille: Editor’s Picks | EuropeUpClose.com

[...] hotel offers a convenient parking garage, so you can easily use this hotel as a base for taking day-trips  in Provence.  We stayed here for two nights in September and enjoyed the large rooms with modern appointments. [...]

Thanks, VBT, so glad you enjoyed it. Look for other articles of mine on this site about the south of France.

Wonderful Article! Love the idea of taking back roads to explore in the morning and zipping home on the Autoroute to save time. Sounds like a great way to experience Southern France!