Renown for its freshest of the fresh seafood and sublime beaches, the city of Porto Cesáreo in Italy’s Puglia region is a popular destination among Italian tourists and an ideal location to experience Southern Italian coastal culture. Located on a small peninsula, the seafood markets, gelaterias, restaurants, and bars extend into a calm bay. 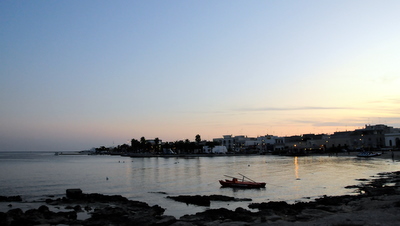 Apparently this impressive natural formation wasn’t enough, and a man-made island, which is home to the Hotel Gran Paradise, was built and connected by a pedestrian bridge. My girlfriend and I had experienced the fine dining, but reports of Porto Cesáreo’s secluded beaches brought us again to the city.

We arrived on the 104 Bus from the city of Lecce (a 30-45 minute ride), and were dropped off a few blocks from the main beach. This part of the Ionian Sea is known as the Gulf of Taranto and is usually very gentle. The surf is more lake-like than ocean-like, and we could walk more than 50 feet into the bay before the water was over our heads. Other parts of the beach were very busy—no surprise for mid-August—but our section was serene. 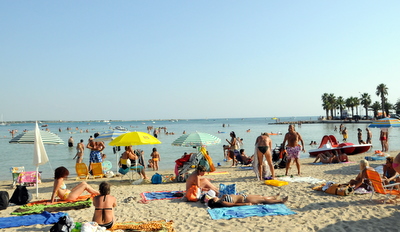 When we took a walk along the boardwalk that wraps around the city, the slew of seafood markets were just opening. They sell fresh seafood of all kinds, and the calamari, swordfish, mussels, prawns, and clams made a dizzying display. Raw sea urchin is a specialty and not to be missed.

After the markets, we came to the tip of the peninsula and saw a thin line of beach-studded islands out in the bay. The islands are too small to accommodate buildings of any type, but the beaches were populated with sunbathers. They are like tiny, private islands. To take people to the islands, several privately operated boats run back and forth. The fishermen operating the boats usually charge between 2 and 3 euro per person. If your Italian is any good, I recommend bargaining: the fishermen would much rather make a deal than see you take your money to the next boat along the dock. 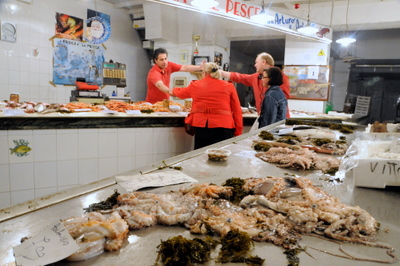 Of course, you could also attempt to do what we witnessed: A group of four had decided to walk the shallow bay out to the islands with their towels and beach bags balanced on their heads. The distance looks quite far from shore, and when they were about 1/3 of the way there, the water was well above their waists. My girlfriend and I watched the tedious procession for a few more minutes, during which the adventurers made little progress. Unless you are looking to get completely wet—and maybe your beach bag too—I wouldn’t suggest trying to walk to the islands! 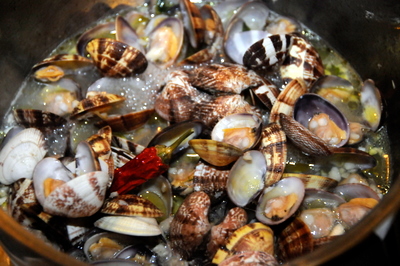 When it was time to catch our bus home, we journeyed back to the seafood markets to pick up a selection of clams and mussels for dinner. The prices were right and when we asked where the shellfish had come from, the shop owner could point to the exact location.