Croatia is full of natural beauty, with a sun-tanned coastline, shiny blue sea, regal mountains and mint green parks. But even in the midst of all this beauty, there is one place that stands out above all others: The Plitvice Lakes National Park.

Situated between the capital Zagreb and the town of Zadar, Plitvice (pronounced Plit-vee-tc-ha) is a sequence of sixteen interconnected blue-green lakes, and the sheer drama they inspire: a symphony of leaping walkways, lush meadows and forests, cascades, and exotic wildlife. It is little wonder then that the Park enjoys UNESCO World Heritage Site status. 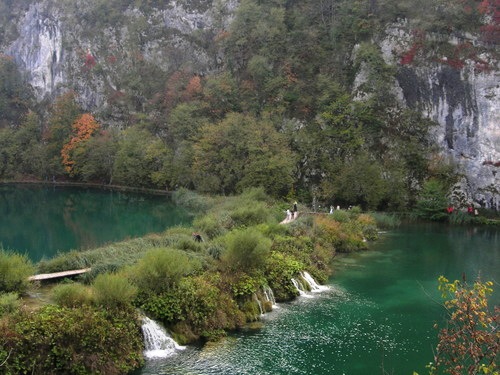 The lower lakes in the Plitvice National Park

Be ready to drop your jaw, and leave it there, as the Park shows unbelievable scenes, the kind that are usually achieved only by trick photography. The sheer number of colors found in the water alone is staggering. The lakes are formed on a karstic basin, known for its re-generating limestone (called travertine) and dolomite rock. It gives the lakes their most alluring characteristic: a constantly changing face. They say no two trips to Plitvice can be the same.

Geographically, Plitvice is divided into the Upper and Lower Lakes. The Upper Lakes sit on a dolomite valley. The region is covered by a stunning beech-fir forest, hiking trails, flowering meadows, and a series of waterfalls with bright rainbows clinging on the moss. The Upper Lakes are also rich in exotic wildlife; birds, deer, boars, wolves and the endangered European Brown Bear reside in these parts. 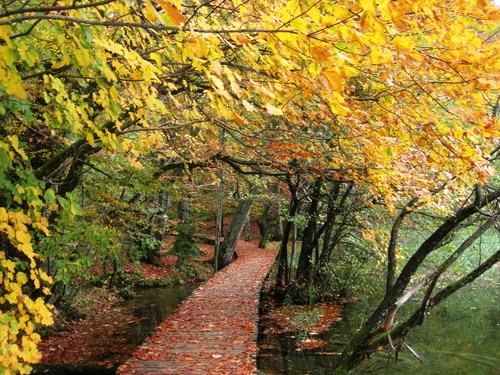 In contrast, the Lower Lakes are set on limestone beds, embued with a fascinating shade of blue. They are much smaller in size and fairly shallow; you can watch the silver-gray fish darting around the lake floor. It’s quite an adventure, following the slithering walkways that navigate this region: in and out of caves, cascades and at several points directly over the waters.

In the early nineties, the serenity of the lakes was disrupted by the violent Balkan War. The erstwhile Yugoslavian army clashed violently with the Croatian forces within the Park perimeter. Plitvice was turned into a battleground, and its facilities into barracks. The destruction was immense, with land mines and bullets replacing the flowers around the meadows. After the war ended in 1995, a major clean-up and restoration effort was undertaken. The mines were cleared, stringent environmental laws were imposed, and the flowers were allowed to bloom once again. 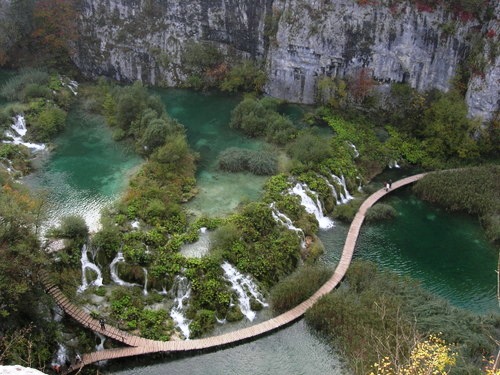 Today, the old wounds have healed and the scars are replaced by merry picnic spreads. The aromas of homemade sausages, smoked ham and cheese flirt with the green of the park. Laughter and cameras flash everywhere, adding to the brilliance that already is.

How to get there: While a number of tourist buses operate here, it is best to rent a car while driving out to Plitvice.

Entry: There is an entry fee charged in the local currency, Kuna. The fee currently ranges between 80-110 Kuna per adult, depending on the time of visit.

What to do: You can choose your own trails depending on how much time you have. These routes are self navigable, making it even more enjoyable. Guided tours are also available.

The park can be explored in a day, but if you have the time, it is best to stay on for a couple of days. There are three comfortable options within the park perimeter, itself.

You also have options of a camping site, hostels and private accommodations, all situated very close to the park.