Down through the middle of Oxford, home of England’s oldest university, runs a north-south axis that takes you past interesting churches, towers and colleges, to a gorgeous meadow. This axis starts with a road called St Giles’, it continues with Cornmarket Street, and then changes its name to St Aldate’s. Following this thoroughfare north to south 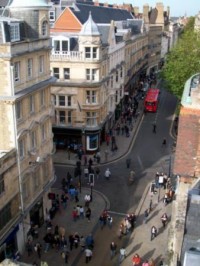 provides just as interesting a tour of Oxford as strolling around the Broad Street-High Street area.

St Giles’ (that is its full name of the road) is so wide that it has space for two churches between its traffic lanes: St Giles’ Church at its northern end and St Mary Magdalen’s at its southern end. Both are handsome, square-towered buildings that were completed in the 12th century, although St Mary Magdalen’s – which is invariably surrounded by dozens of parked bicycles belonging to students- has a Victorian Gothic interior.

The road also features two famous pubs: on the east side, the Lamb & Flag, and on the west, the Eagle and Child. At different times, each of these pubs was the 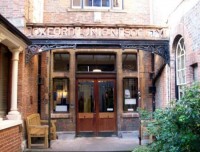 location of weekly meetings of the Inklings, a writers’ group in the 30s and 40s that included J.R.R. Tolkien and C.S. Lewis. Both are owned by St John’s College, one of the dozens of colleges that make up Oxford University. St John’s, founded in 1555, is on the east side of the road, a little south of the Lamb & Flag.

St. John’s is also one of Oxford’s largest, richest and most prestigious colleges; it was the alma mater of novelist Kingsley Amis, poet Philip Larkin, and former prime minister Tony Blair.

The atmosphere changes as you cross the intersection to continue south down Cornmarket Street. This has been a commercial center for centuries and continues that tradition to this day. There are several burger restaurants, as well as Boots, a big drugstore, and HMV, a music and video shop. The street is entirely pedestrianized. 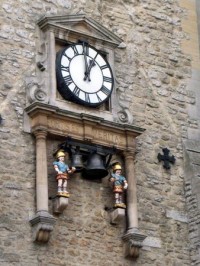 On the east side of Cornmarket Street is Oxford’s oldest building, the Church of St Michael at the Northgate (1040). The chruch property contains a tall tower which you can climb (for a small fee) to get a spectacular view of the Oxford area. Further down Cornmarket, on the western side, an unpromising passage leads to the Oxford Union, a debating club run by student volunteers who often go on to illustrious political careers. The Oxford Union sometimes hosts famous personalities as guest speakers, such as: Mother Teresa, Michael Jackson and Kermit the Frog. At the southern end of Cornmarket is Carfax, a tower that is all that remains of a 13th century church. It boasts a charming clock that chimes at the quarter-hour. 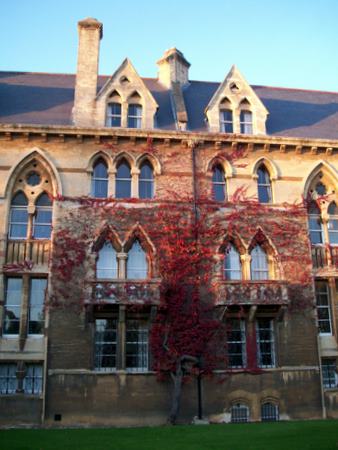 Cross another intersection and proceed to the south. The mood changes again as you encounter the noisy St Aldate’s which is the route for double-decker buses. On this street, you can’t help but notice Tom Tower, a part of Oxford’s grandest college, Christ Church (founded 1546). The 17th-century tower contains a seven-ton bell, Great Tom, which is rung 101 times each night at five minutes past nine. But that is not the college’s only claim to fame. Christ Church, nicknamed “The House”, even boasts its own cathedral, the seat of the Bishop of Oxford. The writers, Lewis Carroll and W.H Auden, are among the alumni of this college, along with a matchless thirteen former prime ministers.

While tourists are not allowed into the colleges, you can enter Christ Church’s beautiful meadow through a gate on the east side of St Aldate’s. 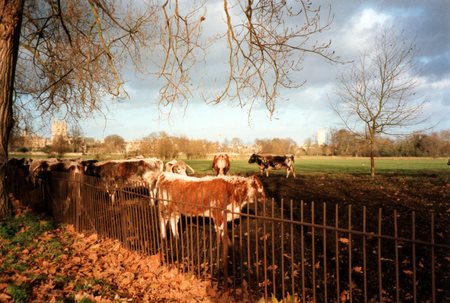 From that entry point, the peaceful meadow extends well over 1,000 feet east and south. It often has cattle grazing at its southern flank where it is bordered by the river. You may see rowing crews practicing on the river, which is actually the Thames – yes, the river that flows through London – but is called the Isis in Oxford. Other than Christ Church, colleges that back onto the northern side of this huge open area are Merton (founded 1264) and Corpus Christi (1517). A young Kris Kristofferson was a Rhodes Scholar at Merton, allegedly making his first attempts at songwriting during that time. 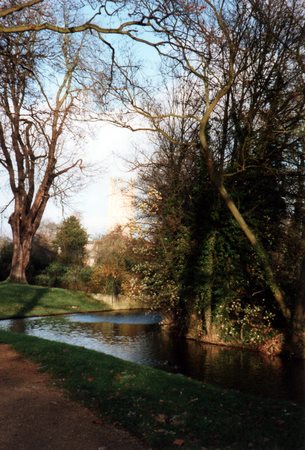 If you need some refreshments during this trip, you can get good ice cream, bagels and coffee at G&D’s, which has been a celebrated Oxford institution since it was founded by students in the early 90s. Its original venue is on Little Clarendon Street, a stone’s throw northwest from St Giles’ Church, but a more accessible and spacious branch is opposite Christ Church on St Aldate’s.

Upon completing this unforgetable walking tour of historic Oxford, take some time to refresh and refuel. At the point where St Aldate’s crosses the Isis, you will find a famous pub, the Head of the River, which offers good food and beverages, and a relaxing terrace looking out over the river. Or, for a good sit-down meal, check out the steak, game and fish offerings at Brown’s, a highly regarded restaurant slightly north of St Giles’ Church on Woodstock Road.