My week in Paris would be marked by record cold and rainfall, not the most fortuitous of forecasts. But I can be a sweaty, sun-baked tourist anywhere. As I soon discovered, there’s something about exploring the city wearing a trench coat, gloves, and scarf, hunkering beneath an umbrella and seeking sanctuary at any number of awning-covered outdoor cafes, that’s really kind of perfect. 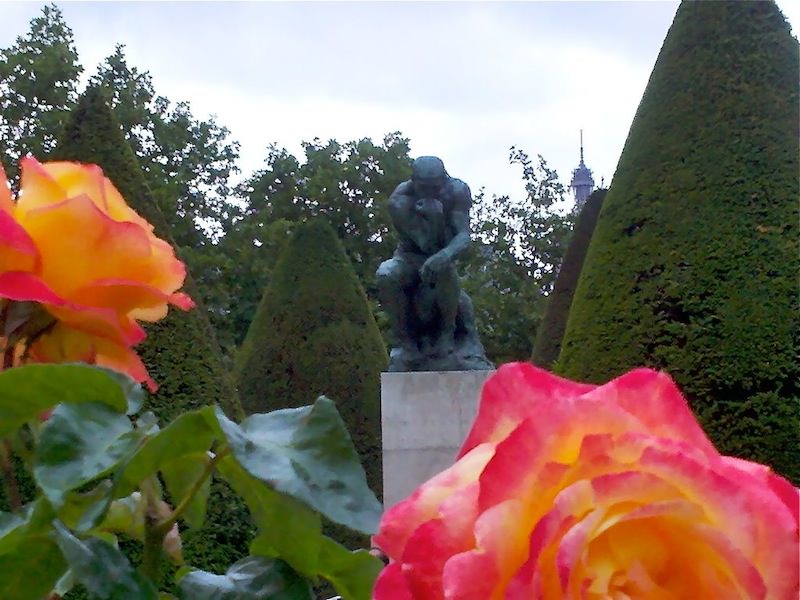 Whatever the weather, you can easily fill a day, or certainly several hours at The Rodin Museum. Situated in the seventh arrondissement, the site was all of a five minute walk from the Hotel Bourgogne & Montana, the charming mid-priced hotel that would be my base camp for the week. Created in 1916, the Rodin Museum is housed in the former Hotel Biron where the famous sculptor rented rooms during the last decade of his life along with other notable artists and savants of the era. Purchase the dual ticket, which provides admission to both the museum and gardens. At 9 Euros, it’s one of the better bargains among tourist attractions. Given the impending rain, I saved the indoor exhibits for last and headed directly for the sculpture gardens. 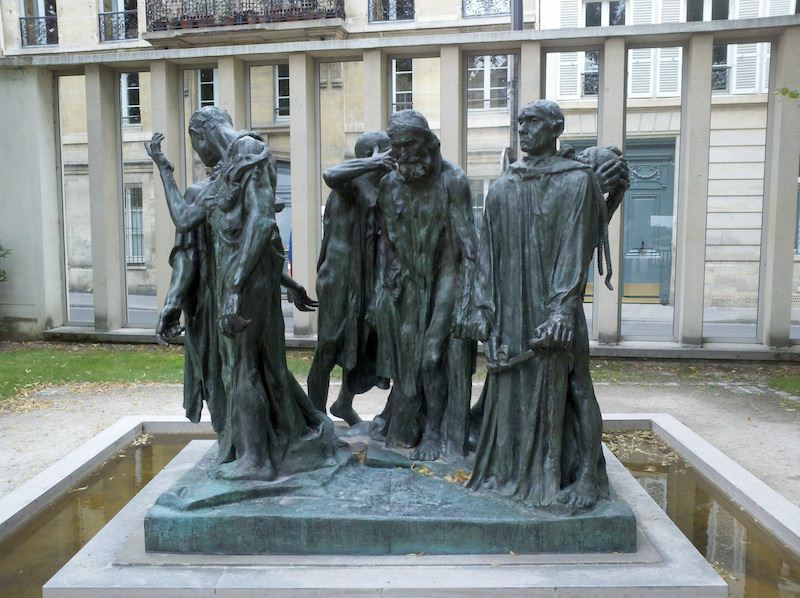 Strolling through the gated green space, each section landscaped according to its unique theme, you’ll see such notable bronzes as The Thinker and The Gates of Hell in the rose garden as well as Balzac and The Burghers of Calais. Bonus, during my visit, Rodin’s famous trysting dyad, The Kiss, was on temporary exhibition, crammed into the chapel along with multiple other marbles both finished and incomplete. My only regret was the lack of space to properly appreciate such a great work.

A late lunchtime stop at the museum café was a great way to close out my visit. The café has both indoor and outdoor seating, and the simple menu wins marks for both quality and cost. My salmon salad was ample and fresh and all of 11 Euros. The outdoor gelato cart is guaranteed to delight kids little and big alike.

A short Metro ride to the adjacent sixth arrondissement brought me to Le Jardin du Luxembourg or the Luxembourg Garden, the city’s second largest public garden. Along with the garden, the onsite palace was commissioned by Queen Marie de Medici to copy the Pitti Palace of her native Florence. Today the palace is home to the French Senate; visitors can attend a hearing when in session. 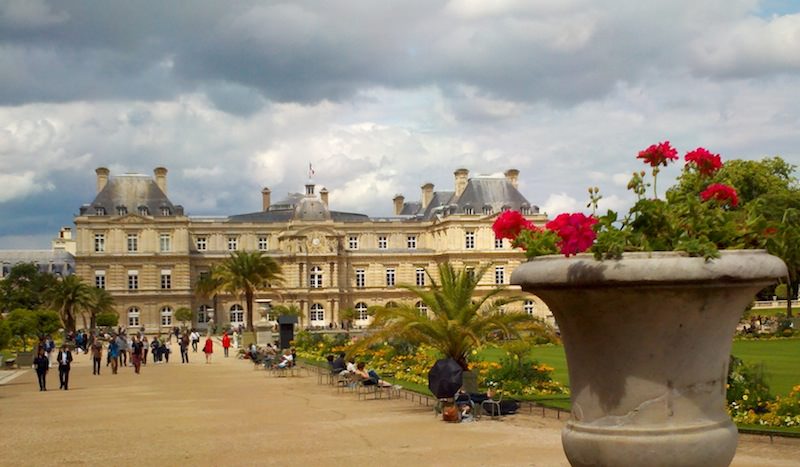 The gardens, greatly expanded from the original eight hectares of Queen Marie’s day, contain more than one hundred monuments, fountains, and statues. Twenty figures of former French queens and female saints peer down from their pedestals on the terrace balustrades. As cool as the queens are, my vote goes to the animal sculptures by Auguste Cain scattered throughout the grounds. My favorite: Cain’s lion created in 1870. 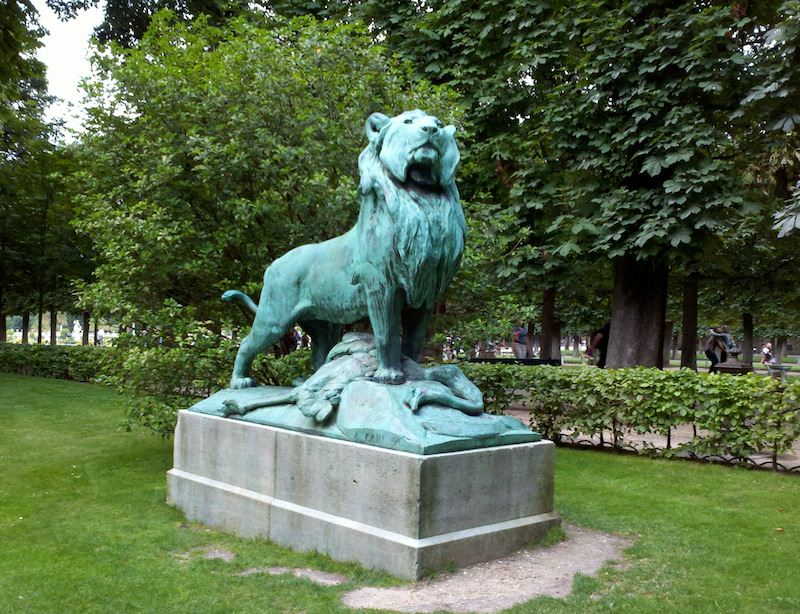 Walking and playing ball on the manicured lawns are prohibited but there are plenty of other pastimes to be enjoyed. Picnics along the central octagonal fountain basin aren’t only allowed but encouraged. Pack yours in advance or purchase goodies from the onsite food kiosks purveying light fare and beverages including beer and wine. Chess players prove their prowess while young and old alike look on. On decent weather days, runners do laps along the outer gravel path, and you can often find a pétanque match in progress. Bee keeping is also available for those so inclined. Pony rides, puppet theatres, and miniature sailboat rentals are favorites among families with young children. 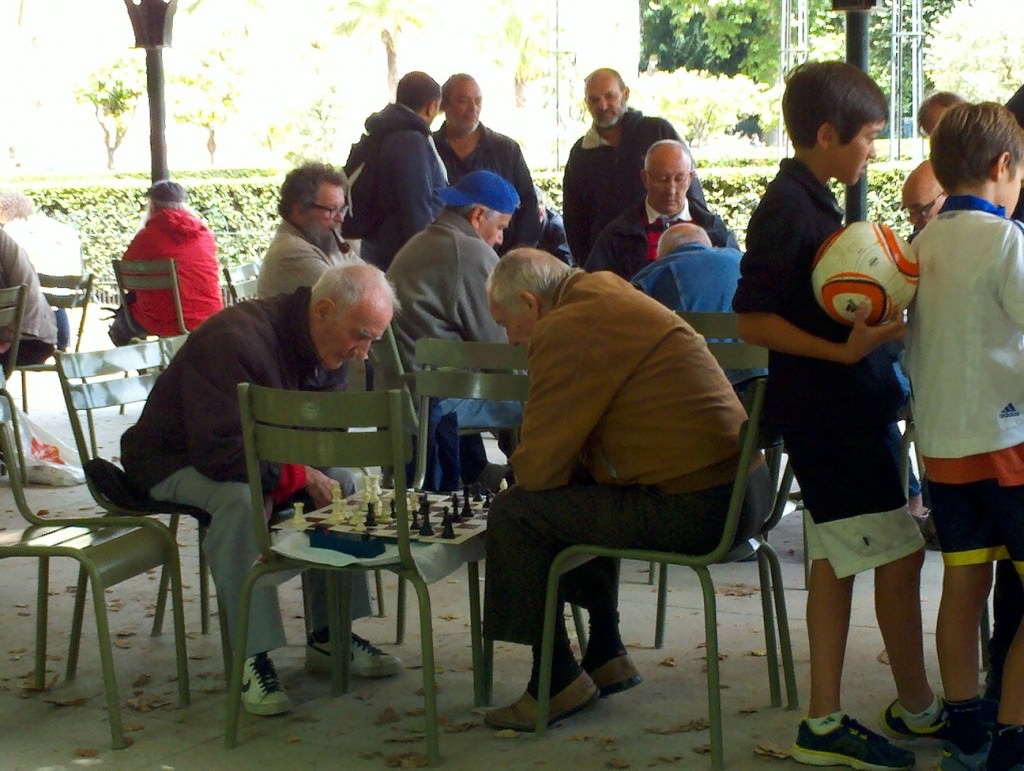 The park closes at dusk. An invigorating if soggy twenty minute walk along Boulevard St. Germain brought me back to the seventh arrondissement. Drawn by the live jazz and pocket-friendly menu pricing, I decided on La Dauphine for a light dinner. The five fromage plate, a generous portion of hard and soft cheeses, included a small glass of Cote du Rhone, all for 13.90 Euros. I gave my order to the waiter who whisked away, perhaps in a hurry to squeeze in his next smoke. Once he’d gone, it occurred to me to wonder whether bread would be brought or if I’d need to order it.

He returned with my wine, and I repeated the French I’d painstakingly rehearsed in my head. “Je voudrais un petit peu du pain, s’il vous plait.” I would like a little bit of bread, please.

Explosive laughter answered my order. Mopping tears from his eyes, he explained that I had not asked for bread, neither a little nor a lot, but instead for the equivalent of un morceau d’ane, a piece of…

“Like when you go to the beach and wear the bikini,” he added, slapping his backside in case I still didn’t get the gist.

His pantomime more than bridged any leftover language barrier. Feeling my face heat, I tried again. “Je voudrais du pain.” I would like some bread.

And that time I wisely left it at that.

Written by and photos By Hope Tarr for EuropeUpClose.com

Out and About in Paris - Part II: Le Restaurant

[…] is article two in Hope Tarr’s Out and About in Paris travel trio. You can find Part I – Le Jardins posted […]

Out and About in Paris - Part III: Les Enfants

[…] article concludes Hope Tarr’s Out and About in Paris travel trio. You can find Parts I (Gardens) and II (Restaurants) posted here as […]

Your story of the (unkind) waiter reminded me of my first trip to Paris alone, trying to use my tiny bit of French. At lunchtime I asked the waitress, in French, for butter with my bread. Evidently she understood the my French but couldn't comprehend why I'd want butter at lunch! The French eat buttered bread only for breakfast. She brought me buttered toast. Libbie

Lovely! I'm most envious of your Rodin experience. His sculptures are astonishing. And what beautiful photos. Tres charmant, even on a gray day.