As in any major metropolitan city, eating out in Paris can be pricey if you don’t know where to go or how to go about it. After sinking nearly sixteen Euros into my first morning’s breakfast, a barebones repast consisting of a café crème, a small orange juice, and two slices of charred toast, I smartened up.

INSIDER TIP: Reservations are highly recommended, not just on the weekend. If you are not fluent in French, I recommend using this website to make your reservations. They not only show you some photos of the restaurants and approximate prices for a meal, but some even offer up to a 50% discount. Make your reservation here.

If you consider breakfast to be a mainstay meal, look for hotels that serve it onsite. When booking accommodation in Paris online or otherwise, check to see if the hotel offers a dual daily rate: with breakfast and without. Many, such as the Hotel Bourgogne & Montana, offer guests this pricing flexibility. 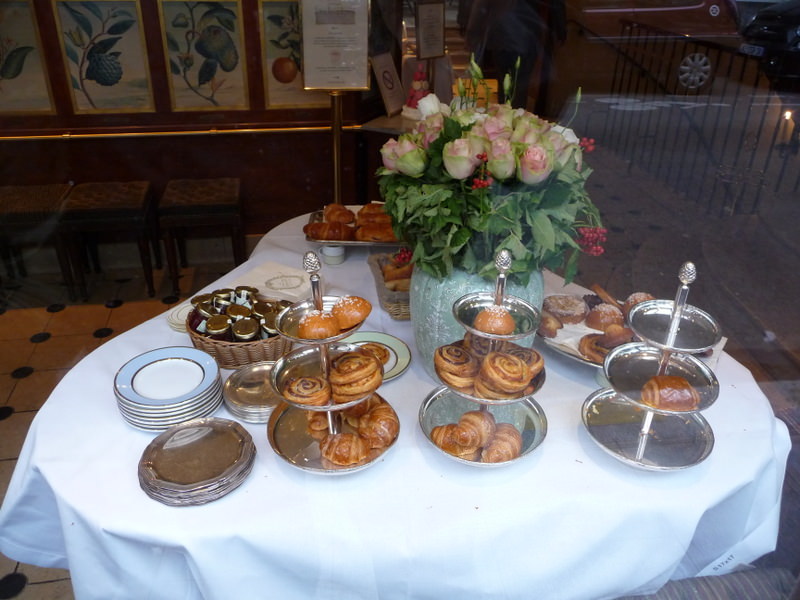 An in-house breakfast buffet offers something to please every palate and can be a time- and money-saver, especially for families traveling with children younger than twelve for whom the breakfast surcharge is typically waived. And there’s something infinitely civilized about having a leisurely brunch-style breakfast in the hotel’s graciously appointed dining room, perhaps while perusing a complimentary copy of Le Monde.

Lunching al fresco need not mean opting for a potentially pricey café. Patisseries, traiteurs (catering establishments), and boulangeries offer more than pastries and breads; they are also excellent cost-conscious venues for healthful, budget-friendly lunches or quick sustaining snacks. For just 6.05 Euros I savored a sumptuous to-go lunch of avocado stuffed with crab salad topped with salmon roe and a freshly baked baguette from Rollet Pradier, a patisserie in the 7th arrondissement within steps of The National Assembly. That I ate my impromptu picnic on a bench with a birds’ eye view of the Seine made for delightful dining indeed. (Check store hours as many patisseries etc. cater to the breakfast and lunch crowds and close by 6PM). 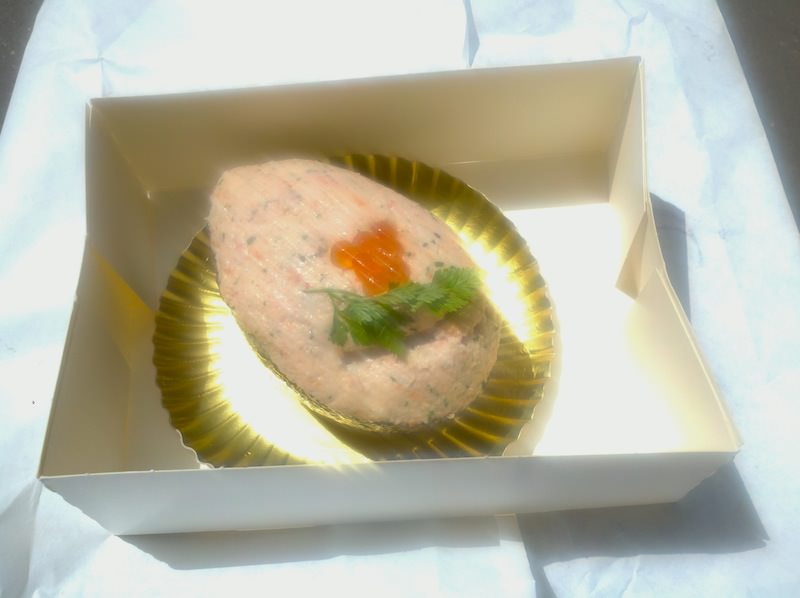 Many visitor attractions, including public parks and museums, have on-site kiosks and cafes that offer surprisingly affordable food at indoor-outdoor cafes. Most serve simple, freshly prepared fare, a selection of coffees and sweets, and beer and wine. For those looking for lunch on the go, street vendors and storefront shops abound especially along the Seine. Pick up a quick Croque Monsieur or the French version of the hotdog for fewer than 5 Euros. 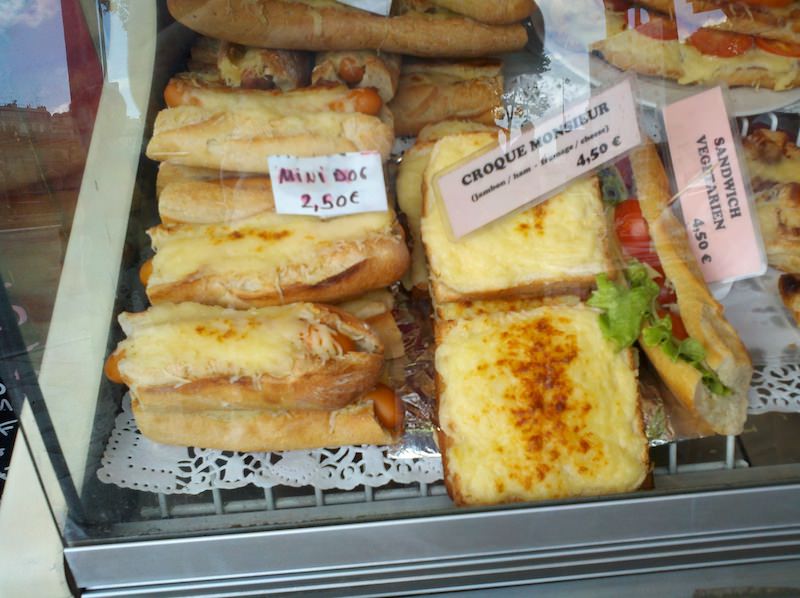 Hotdogs and Croque Monsieur make a tasty lunch on the go

Alternatively, make lunch your main meal of the day, eat heartily, and have a casual light dinner. Le Plat du Jour (literally dish of the day), often referred to as Le Formule (fixed price), allows midday diners to choose two courses: an entrée (starter) and plat principal (main) or a plat principal and a dessert for a more affordable price than ordering a la carte. Often these designated dishes are the house specialties!

With awnings and heat lamps for nearly every table, not to mention the Parisian penchant for smoking, now outlawed indoors, Paris café culture flourishes year-round. Still, with its original Art Deco detailing and interior of red-covered seats, mahogany, and mirrors, Café de Flore is not a bad place to be driven indoors. 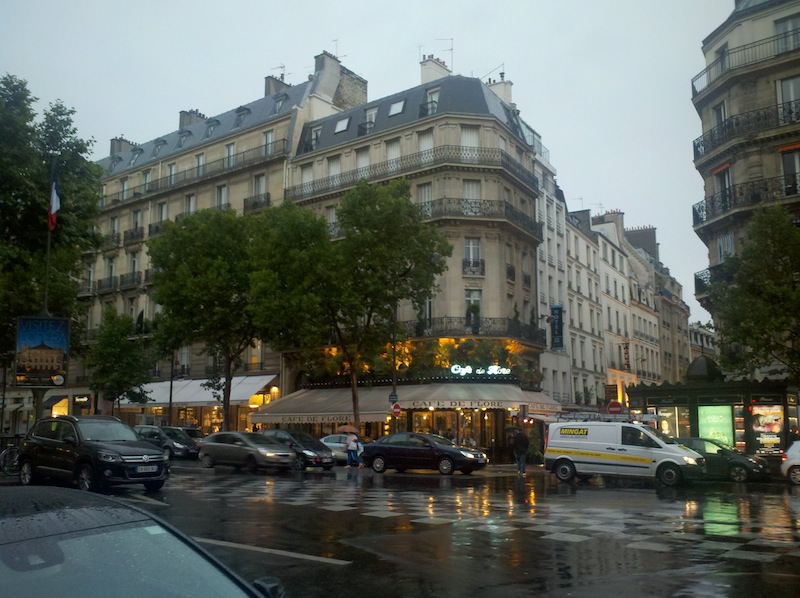 This iconic café and restaurant nestled in the heart of Saint-Germain-des-Prés affords the quintessential Paris café experience at a slightly steep—but totally worth it—price. Since its 1887 debut, Café de Flore has provided sustenance to great artists and literary figures such as Picasso, Sartre and Camus. Today it manages to retain an artsy, intellectual vibe despite being in one of the Left Bank’s more tourist-crowded corridors. Bonus: the waiters crack frequent smiles in real life as well as on the delightfully whimsical website.

The nearby Les Deux Magots is another similar Saint Germain stopover. Founded in 1933, it also hosted the likes of Hemingway, Gide, Picasso, and Simone de Beauvoir. The establishment offers patrons two menus, one for the restaurant and another for the café. Go for the less pricey latter, order a cheese plate or a salad and glass of something lovely, and settle in with a notebook or sketch pad. 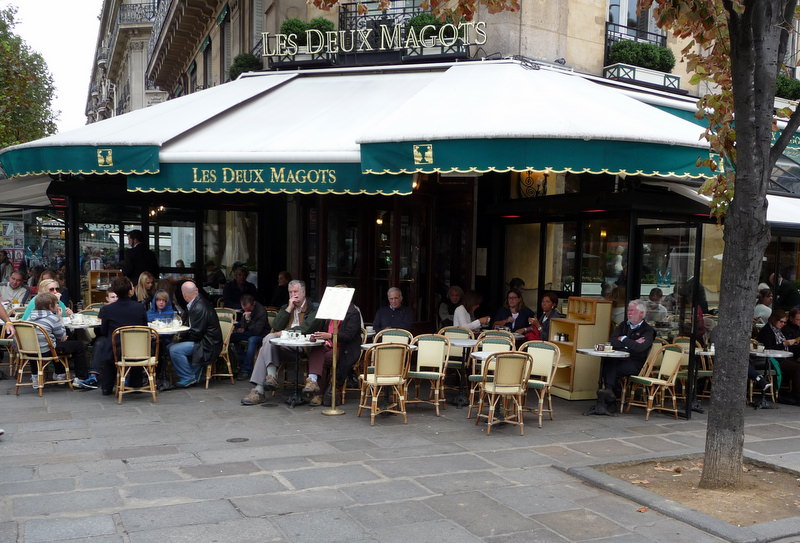 La Rotonde in Montparnasse is a brasserie of likewise mythic literati reputation. Opened in 1911, between the two world wars, it was yet another gastronomic go-to for many of the great writers and Surrealist painters. Today filmmakers and artists still congregate in the café tables banding the restaurant’s ovular rouge rotunda.

Brasserie le Bourbon is more than a trifle touristy, but decent pricing and a stellar location looking out onto the National Assembly make it a good place for lunch, dinner, or a late night bite. An after-hours craving for fries—frittes—drove me to its crimson-covered awning beneath which I happily camped for an hour of people watching and unabashed eavesdropping. 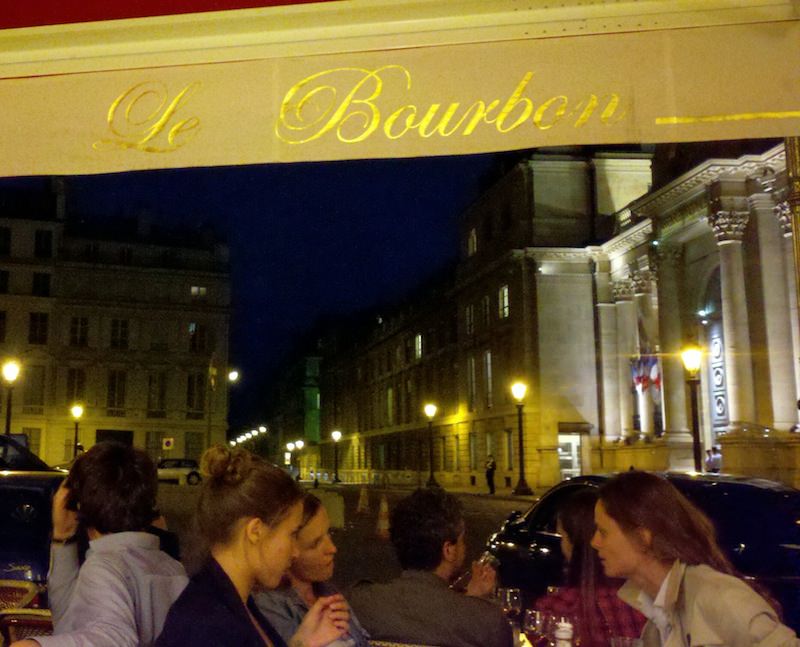 At some point during your stay a splurge may be warranted. My Bastille Day multi-course meal at the Terrass Hotel in Monmartre was such an occasion. Ordinarily the “CosyBar,” the rooftop terrace was transformed into an elegant open air restaurant for the holiday. The food was nice enough, the service attentive and pleasant, but it was the prime view of Paris proper, notably the Eiffel Tower with fireworks display that transformed dinner there into a life-lasting memory.

Table service at most Paris restaurants and cafés is inclusive—“taxes et service compris.” Percentage-based server gratuities, notably the 15-20% that has become standard in The States, are neither solicited nor expected. Still, most patrons leave some monetary token of appreciation. The amount depends on the service, the number of persons in your party, and whether food was served or only beverages. When in doubt, round up to the nearest Euro e.g., for a 5.70€ glass of Sancerre wine, I would leave 6€; for a full meal, an extra Euro or two.

Perhaps in part because the wait staff is not reliant on tips for their salary, service in French cafés and restaurants is…variable. An aloof, even disinterested demeanor is common. Non-natives who make the effort to greet their server in French, or even to order in French if possible, are sometimes rewarded with a better attitude, sometimes not. Still greeting someone with “Bonjour”/”Bonsoir” and leaving them with “Bonne Journée” (Good day) or “Bonne Soirée” (Good Evening) doesn’t cost anything. Pourquoi pas? 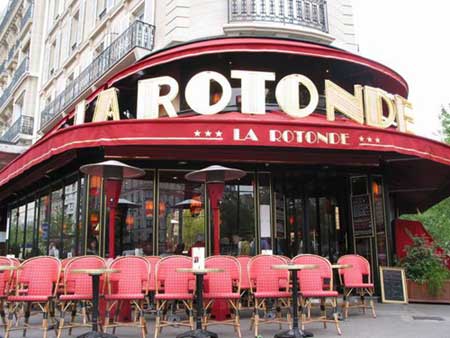 Lastly, because Paris cafés purvey fairly standard fare with the menu posted at the restaurant front—servers won’t automatically bring you the menu—la carte. If you want to see one, and I nearly always do, be prepared to ask. And don’t take offense when they bring you the bill—la facture or la note—without your having asked. They’re not trying to rush you out—well, not usually.

Written by Hope Tarr for EuropeUpClose.com

This is article two in Hope Tarr’s Out and About in Paris travel trio. You can find Part I – Le Jardins posted here.