The land steams. Volcanoes erupt. Earthquakes rumble. Mud boils. Geysers gush. And, water at 100C to 200C (212F to 392F) pours right out of the earth. Iceland is the only landmass that straddles the North American and Eurasian tectonic plates. Their junction is called the Mid-Atlantic Ridge that runs north-south splitting Iceland in two. The geology is so temperamental because the plates are relentlessly pulling apart. Seismic activity has defined Iceland’s landscape and shaped its people for centuries. It is both a boon and a curse. 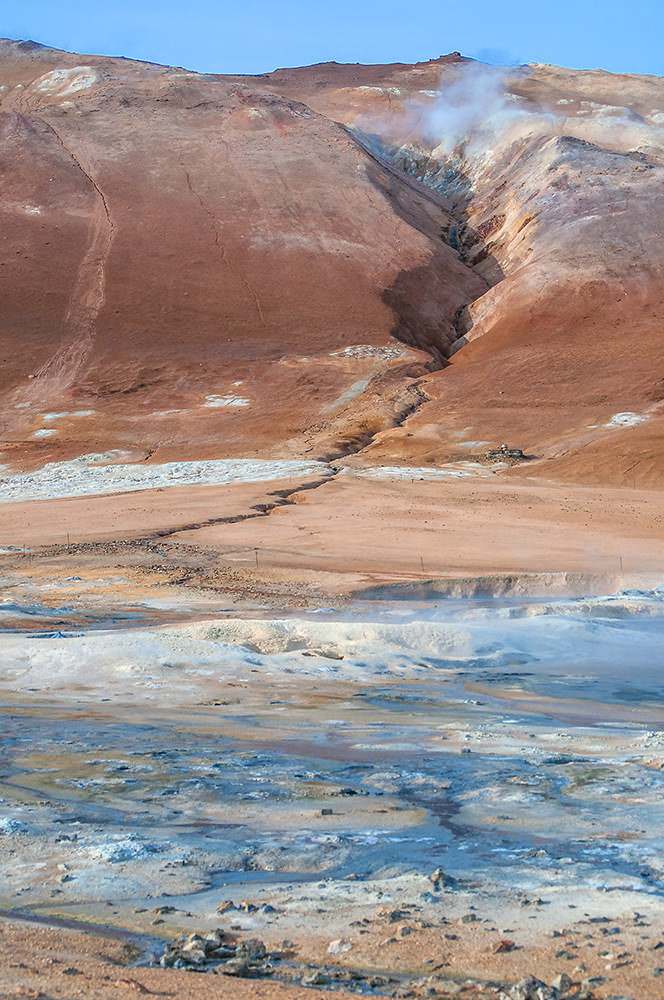 Hverarond is an area of intense geothermal activity east of Lake Myvatn bordered by the burnt orange slopes of Mount Námafjall on its western side. Many consider this is the best attraction in Iceland.

I was visiting Iceland’s north, a place that has never featured on my top ten list of travel destinations — not even on my top thirty, if I’m honest. Flying to Canada from Scotland on IcelandAir, I discovered I could stopover for a week or more on the same ticket. So I lingered awhile and left wondering why I’d ignored Iceland for so long. 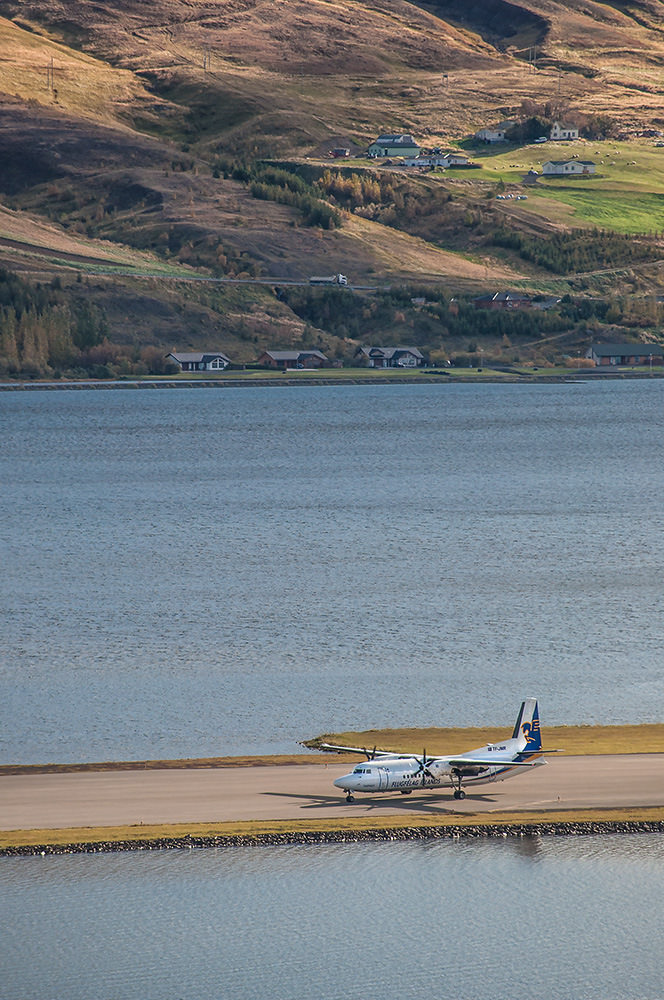 An Air Iceland Fokker 50 lands between the mountains on the runway in the fjord called Eyjafjordur, a five minute drive from Akureyri.

After transferring from Keflavik to the domestic airport in Reykjavik, I flew to Akureyri, the second largest city in Iceland. It’s home to about 20,000 residents who voted to have heart-shaped stoplights: I liked the people immediately. The pretty town lies at the inland end of Eyjafjordur, Iceland’s longest fjord, and is only sixty-nine miles (111 kms) from the Arctic Circle. Settled in 890CE by a few Norse and later Danish traders, Akureyri today has a university, active fishing and ship-building industries, a growing tourist trade, and is surrounded by rich farmland. 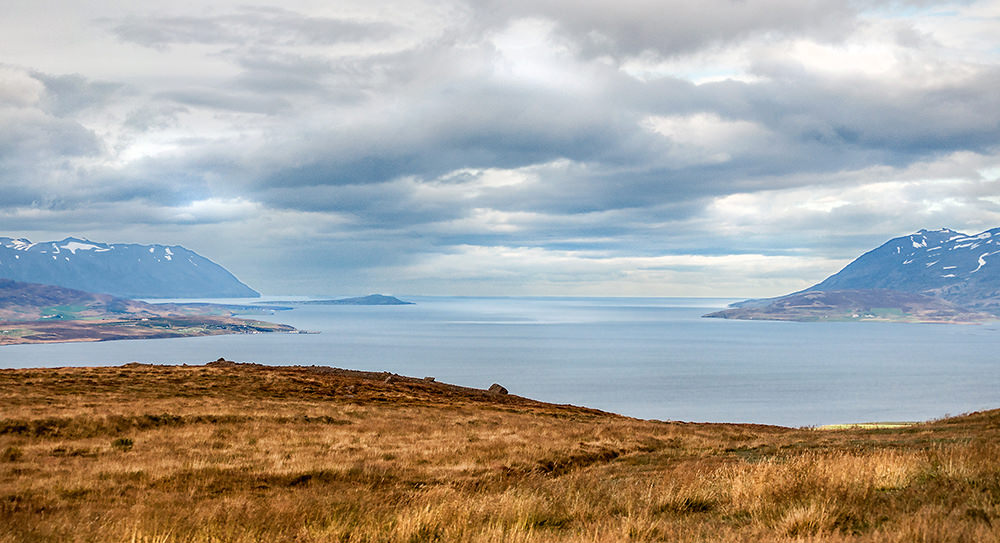 Eyjafjordur widens at its northern opening to the Atlantic. The island of Hrisey, a small farming community, lies near the horizon on the left.

Icelanders are steadfast and independent. They manage the long, dark winters by plunging into creative activities like choral groups, and artistic and literary endeavours, which is why Iceland has more published authors per capita than any other nation. They are active outdoors all year, skiing, hiking, and riding, and adore ice cream. Many work two jobs. 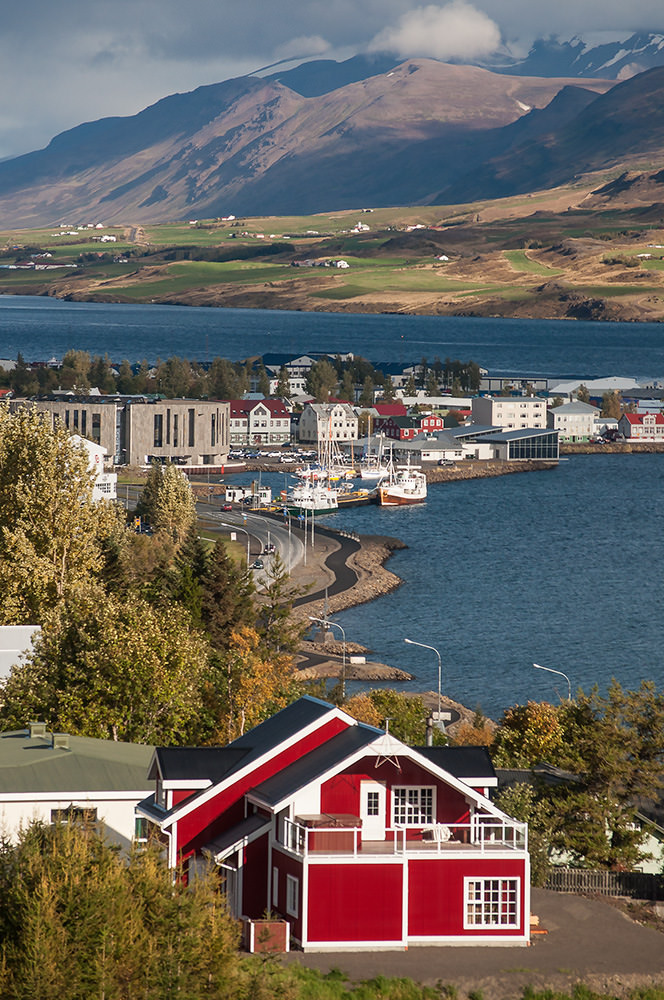 Akureyri in September and the farms on the east side of Eyjafjordur. The town is a port of call for big cruise ships on round-Iceland cruises, and passengers can enjoy the same tours that land-based tourists take.

The northern climate is sunnier and drier than the south, and at the end of September when I visited, it was late fall. The season had painted the region in rich golds, deep russets, subtle grey-greens, and lush crimsons, which were an unexpected bonus for a photographer. 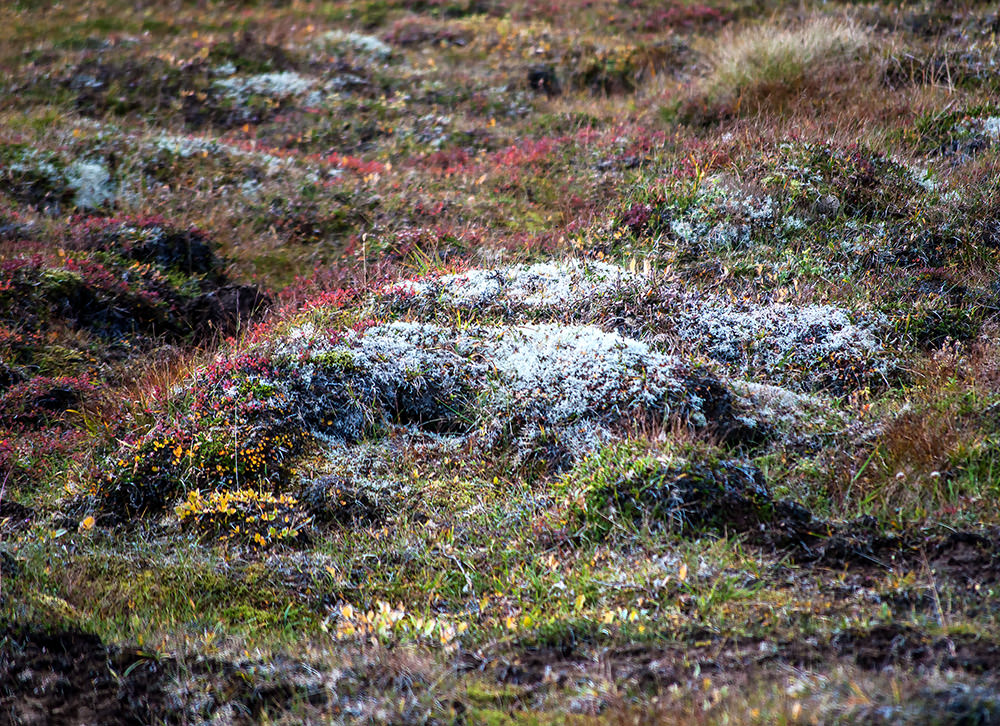 The sub-Arctic plants on the mountain sides show off their fall colors. Sheep graze here in summer and the plants flavor their meat, which is served everywhere in the famous lamb stew.

I explored the north with two companies that operate a wide choice of small-group tours year-round from Akureyri, including night outings to view the Aurora Borealis and flights over active volcanoes. It was the right decision — in the comfort of mini-buses or AWD vehicles, visitors can reach places where cars can’t go, with guides who know the history and geology of Iceland. And, of course, geology is Iceland’s major attraction. 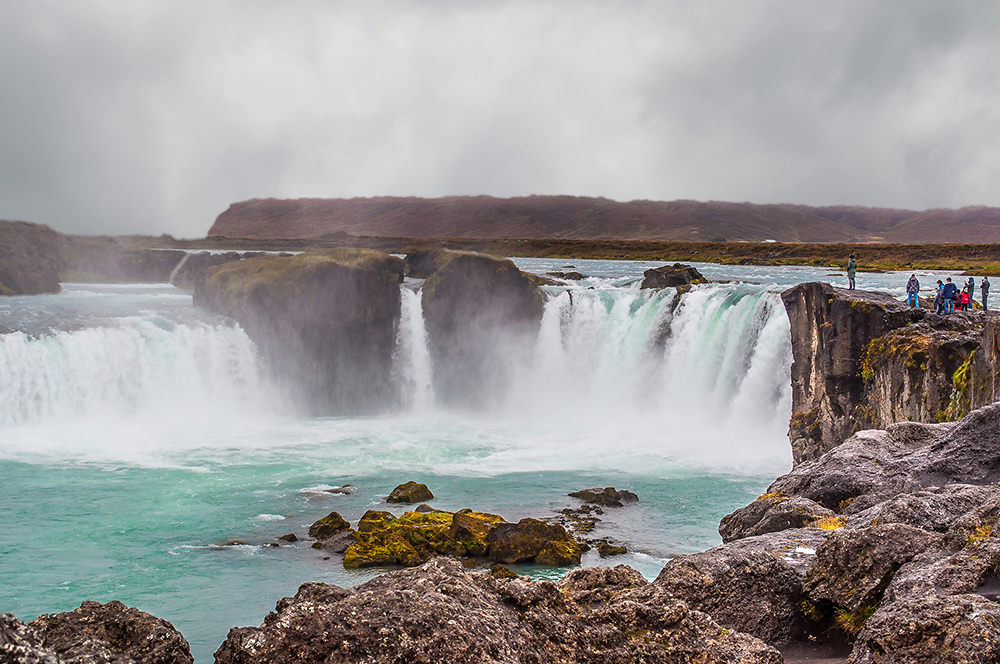 At Godafoss, Iceland’s Lawspeaker tossed his statues of old Norse gods into the river in 999CE after the nation converted to Christianity. Godafoss means Waterfall of the Gods

My tours were ten to eleven hours long, and as it was low season, I shared the guides with only one or two others. Both companies customized the tours to fit our interests and need for photography. I visited remote areas, experienced nature’s power, marvelled at contrasts of ancient and modern, and once thought I was on the moon. But I didn’t see all that northern Iceland offers and wished I had stayed twice as long.

The big waterfalls in Iceland are must-sees — the water cascades in a thunderous roar and the spray dazzles with multiple rainbows.

Dettifoss drops 150 feet (45m) in a thunderous roar after collecting water from the huge Vatnajökull glacier to the south. (The new paved road that rental cars can use was closed when I visited for safety reasons.)

My favourite was Dettifoss, the biggest waterfall in Europe, but the thirty-four-mile (50kms) old road to reach it had the worst washboard I’ve ever experienced. I thought my teeth would fall out. (Rental cars are forbidden on this road.) The hike from the parking lot down to Dettifoss was steep and rocky, but the reward, spectacular. When I turned to look downstream, I faced a mini-Grand Canyon. 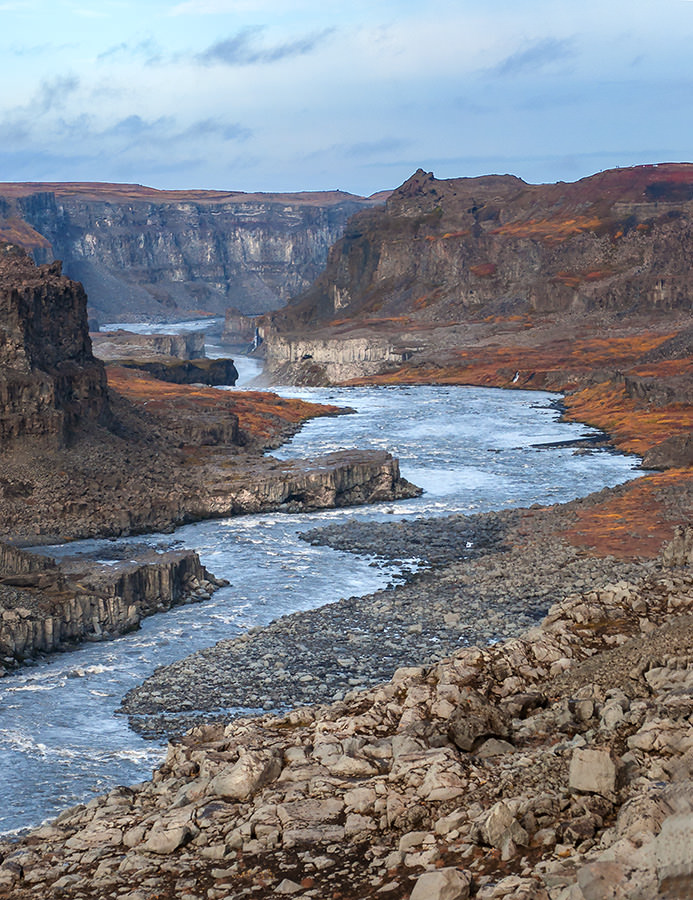 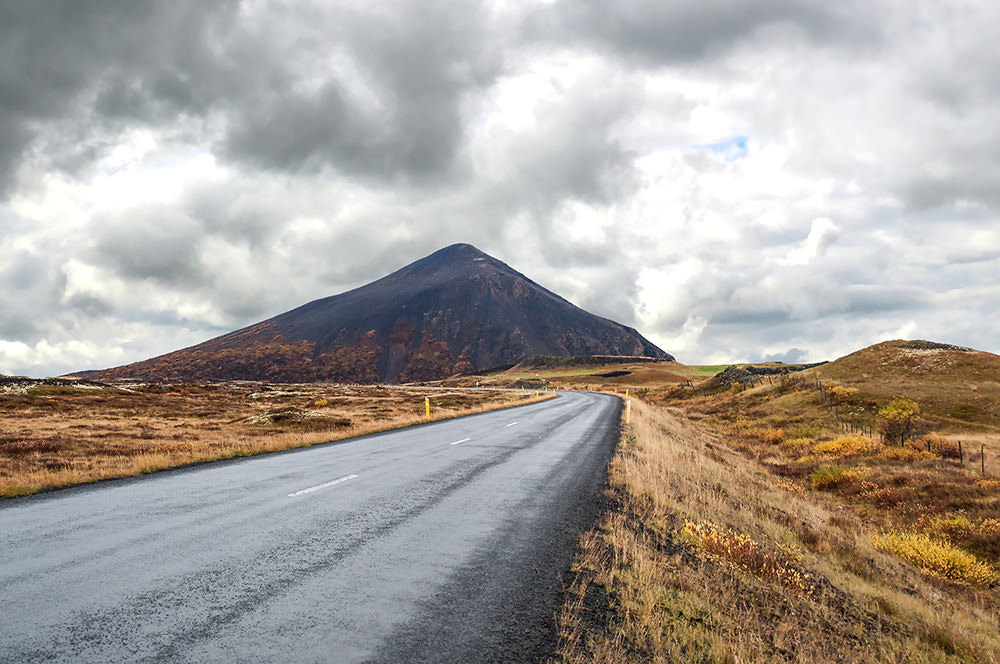 Further along, the flat land was barren, pock-marked by small rocks, and had been used for training astronauts before the moon landing. Another area was swathed in steam rising from too many vents to count. I traveled unpaved lanes in the bottom of wide glacier-scoured valleys and high up on mountainsides. On the north coast, river deltas were surrounded by green fields spreading to the sea, and the small harbours were filled with fish and whale-watching boats. Near here, I too straddled the Mid-Atlantic Ridge, left foot on the North American plate and my right on the Eurasian plate, yearning to feel them move. 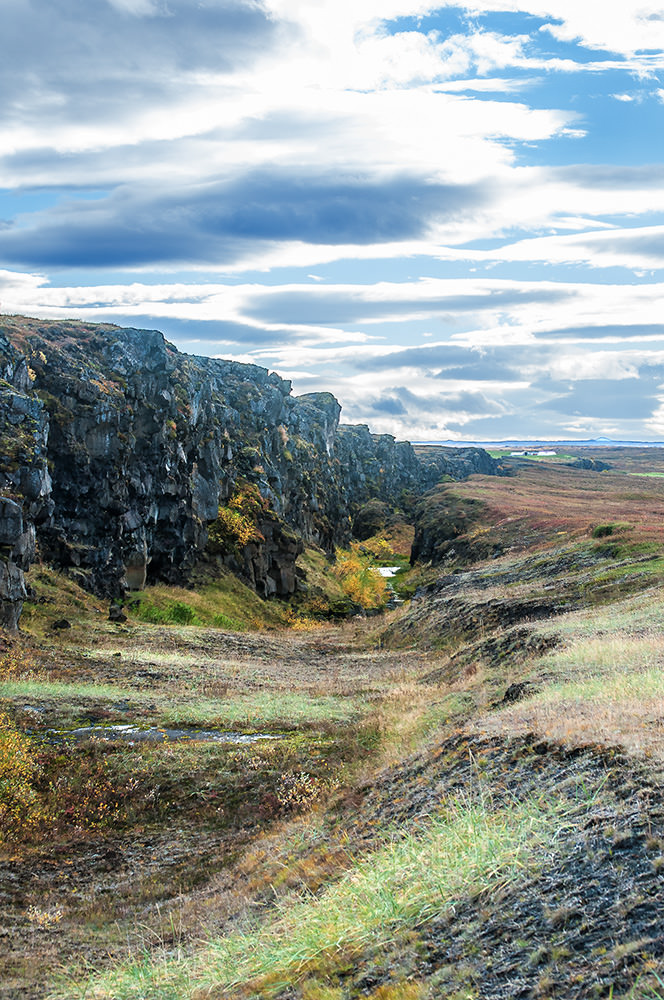 One of many spots where the Mid-Atlantic Ridge can be seen in Iceland. As the tectonic plates pull apart, lava bubbles up and creates new land or subsea forms.

I caught my first glimpse of Icelandic horses on the north coast as the sun was going down. They are small, but not ponies, and are one of few breeds that must have company of their own kind. Strong and hardy, they winter mostly outside. 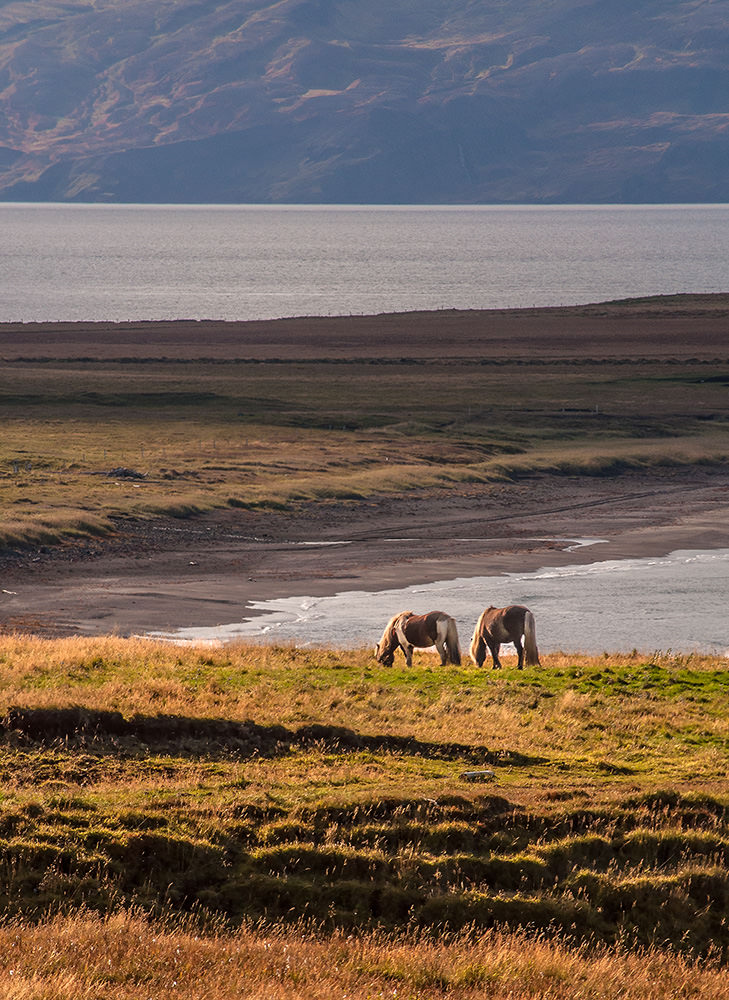 Icelandic horses’ coats come in many colors and so do their eyes.

Later after coffee with a farmer, I met fifty on his farm near Grenivik. These horses are polite — an odd but perfect word to describe them. They ambled over to greet me and stood still as I stroked and patted them, never tossing their heads or treading on my feet. These horses have remained pure-bred since their ancestors came to Iceland aboard Viking longships in 834CE, thanks to an ancient law enacted in 930CE that remains in effect. It prohibits importation of any horses to Iceland and the return of any that have been exported. Today the Icelandic horses no longer work on the farms; instead they are the mounts for popular riding tours. 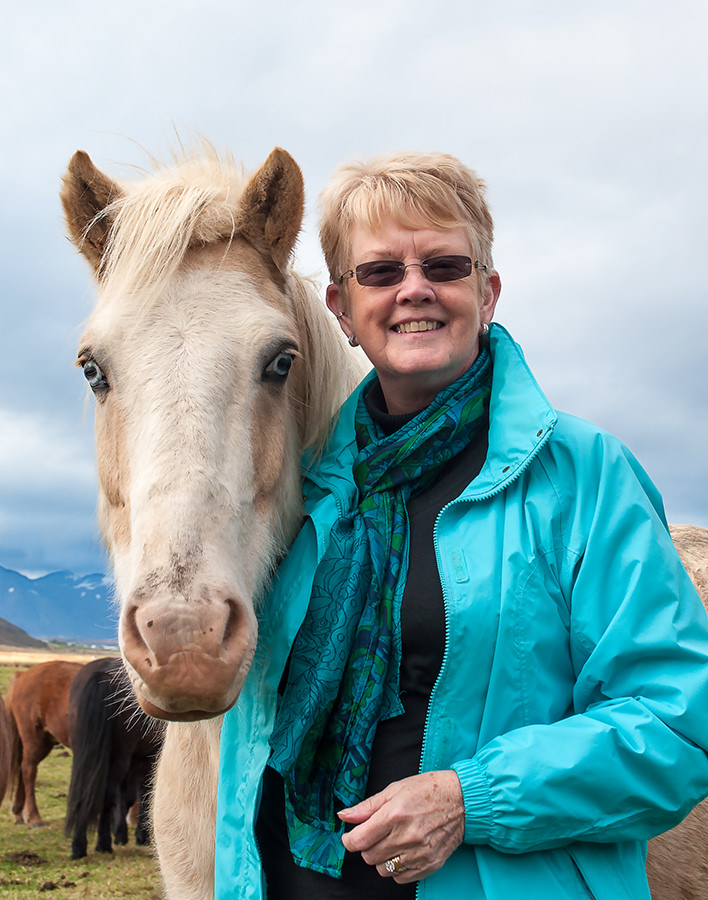 The author with a gentle Icelandic horse. Her eyes are turquoise, unusual in other types of horse, but not in this breed.

Another highlight was above the clouds on a plateau of intense geothermal activity at Hverarond, east of Lake Myvatn. Sulphurous fumes and an icy wind assaulted my nose. Deep gullies scarred Mount Námafjall; pale blue mud pools boiled; and fumaroles roared. Barren and desolate certainly, but the power of Mother Earth was overwhelming. This spot was so striking, I was reluctant to leave. 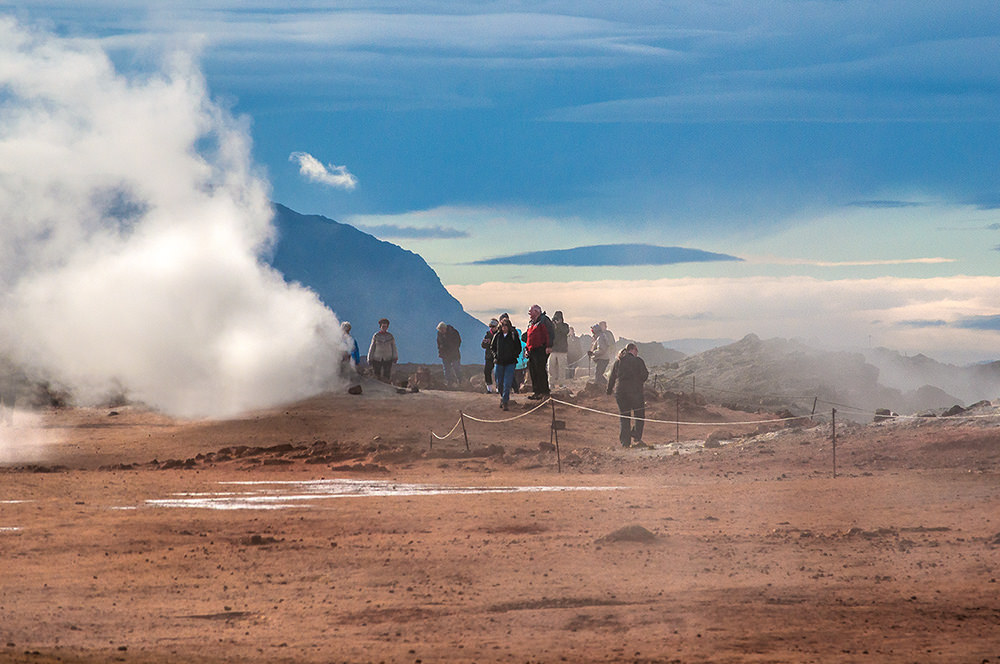 Above the clouds at Hverarond, an icy wind blows away steam roaring under pressure from a fumarole.

Iceland harnesses their limitless geothermal energy to produce electricity from the 200C (392F) water, provides the nation’s 100C (212F) water for central heating and household use, and diverts the used hot water under their roads and sidewalks to melt ice and snow in winter. Icelanders also appreciate that the geologic boon attracts growing numbers of tourists. They accept the curse of catastrophic seismic events, but do not fear them, and most enjoy the endless hot water and swim year-round. Every community’s outdoor swimming pool is at the heart of Icelanders’ social life.

Iceland is like no other place I’ve visited. Scenic, yes. Remote, certainly. Friendly, definitely. But it’s different somehow — the land under your feet feels alive.

The author is grateful to Promote Iceland, Saga Travel, and Nonni Tours for making her explorations of Northern Iceland possible.

Written by Julie H. Ferguson and  © Photos by Pharos for EuropeUpClose.com

Marilyn: Thank you for your kind words. I didn't know about the Christmas Book Flood — it doesn't surprise me as I know Icelanders are so renowned for their literature. I heard that from everyone I met and discovered they are all storytellers. Wish we had that flood from Canadian publishers, but our population so much bigger than Iceland's.

Mallee: I'm glad you thought my words and images were enticing. I'd recommend a visit for anyone, now that we can get there so easily via IcelandAir. Spring for puffins and all nesting seabirds; late fall for colour and the start of the aurora.

My sister-in-law said they loved it too. Your article is enticing as well as the photos

Thanks for the glimpse into northern Iceland and for the beautiful, enticing photos. Another interesting thing about Iceland is Jolabokaflod (my keyboard doesn't do all the accent marks), the traditional Christmas Book Flood, Publishers send book catalogs to every home in the country , and thousands of books are bought and given around Christmastime. Iceland is said to produce more books per capita than any other country in the world.