Many of Europe’s great cities have an epicenter – a thriving nucleus around which both history and city life revolves.  Paris has the Arc de Triomphe, Rome the Forum. For St. Petersburg, Russia the center of gravity is Nevsky Prospekt. 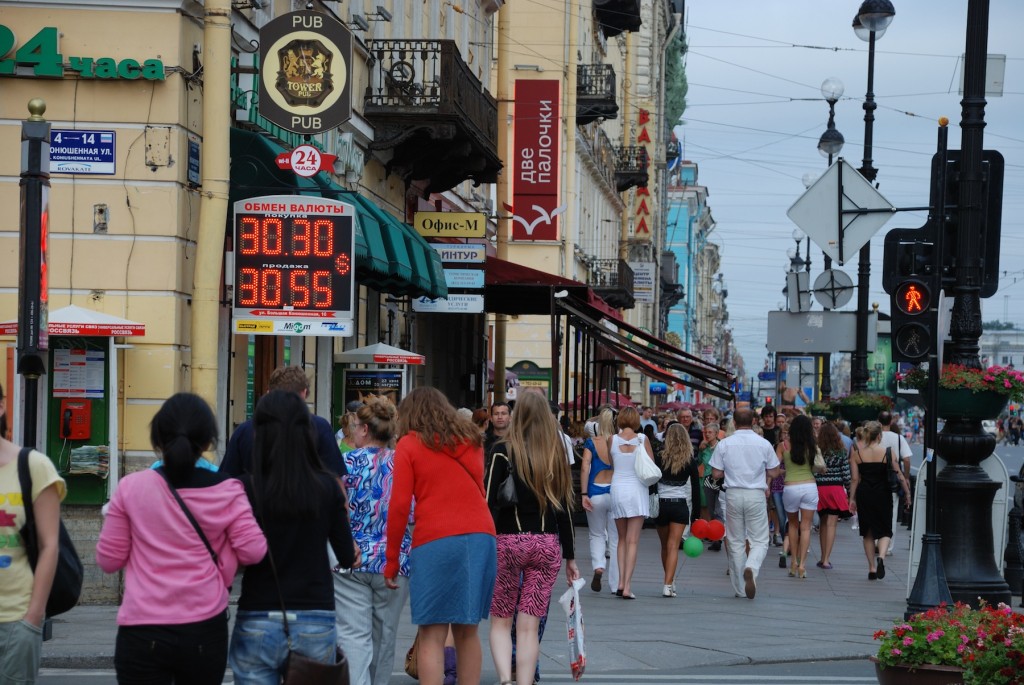 A long commercial avenue, strewn with palaces, buzzing with Ferraris and Ducatis, Nevsky Prospekt defines the city.  It runs through central St. Petersburg, cutting a curve in the Neva River. Tsar Peter the Great intended it as the starting place for a road to Moscow. Today, it retains that grandeur, although you’re more likely to see shoppers overburdened with bags than a carriage on its way to the capital.

To experience the breadth of Nevsky, it’s best to walk. Although Nevsky has several metro stops, bypassing the street means missing out on some first-rate people watching. The streets are stuffed with passersby: artists sketching the spires of a cathedral, their drawings spread on the sidewalk for sale; businesspeople chattering into their cell phones; even a wedding party, tottering in heels across the cobblestones. 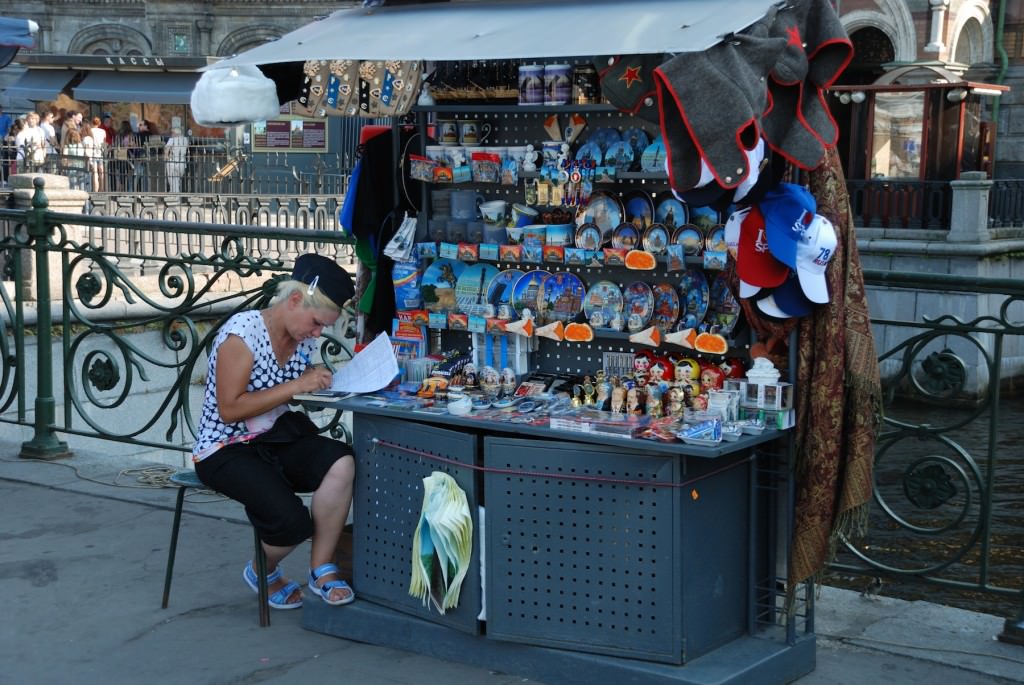 Begin at Vosstaniya Square (Ploshchad Vosstaniya metro stop). From this transportation hub, walk west on Nevsky Prospekt. Canals vein St. Petersburg’s heart; built on a swamp, it retains a network of narrow channels used by tour boats and water taxis. The Anichkov Bridge spans the Fontanka River ahead. Rearing at your flanks are The Horse Tamers, four statues which have become symbols of the resilience of the city. The bridge still bears some shelling marks from the siege of Leningrad, when the statues – along with much of St. Petersburg’s art – were removed for safe-keeping.

From here, Nevsky presents a nearly unbroken façade. Long, multi-story buildings present the disorienting sense of a single edifice, as if each mansion continued uninterrupted into the next. In a plaza to the south looms the Alexandrinsky Theater. Lines of columns march across its pastel face. One of Russia’s oldest playhouses, it still puts on regular theater and dance performances (2 Ploshchad Ostrovskogo).

When Gostinyy Dvor was built in the 18th century, it became one of the first shopping arcades in the world. Now, modern Russians flutter through its Neoclassical halls, picking up the latest designer fashions. The mall stretches along the street’s southern side (35 Nevsky Prospekt). 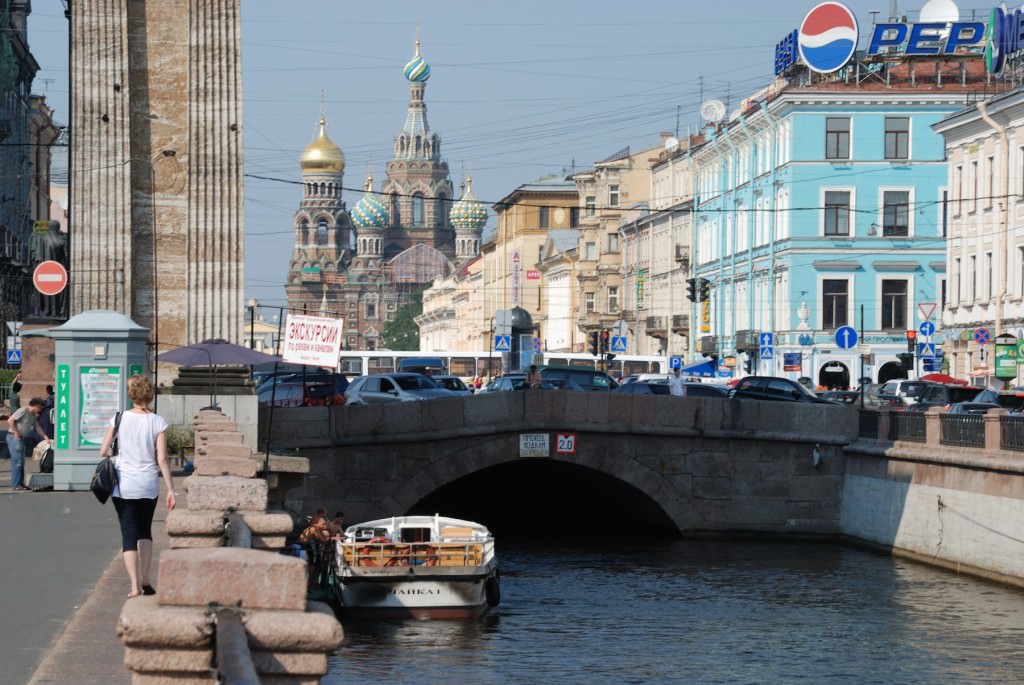 On the north side of the street, a lane leads toward the Arts Square. Here, the poet Pushkin orates to the plaza, cast in bronze. This square is home to the Russia Museum, Ethnological Museum, and the Mikhaylovsky Theatre, a renowned opera and ballet house (1 Ploshchad Isskustv). During the day, this peaceful little square makes a good place to rest, shaded by trees and off the bustling main street.

As Nevsky Prospekt approaches the Neva River, it gains pedestrian traffic. A glance north up the Griboyedova Canal reveals the gleaming spires of The Church on Spilled Blood, rising behind the Pepsi signs.

The crowds culminate at Kazan Cathedral. The cathedral seems to embrace the street; a semi-circle of columns sweep out like arms, and take in Nevsky’s teeming shoppers and gawkers. These blocks contain a large number of restaurants and bars, many of which are tucked up side streets. Inside the cream-trimmed mansions, designer shoes stores share real estate with pharmacies and bookshops.

One of the best bookstores in St. Petersburg lies just across from the Cathedral. The Singer Building once housed the Singer Sewing Machine Company; now it is known as Dom Knigi, or the House of Books (Nevsky Prospekt 28). Gold swirls up the façade, culminating in a glass dome, where cherubic figures struggle to hold up a half-peeled globe. A small English-language section carries most of the classics – Jane Austen, thrillers, and travel books and maps.  The café upstairs, which serves excellent omelettes and espresso, gazes out on Kazan Cathedral. 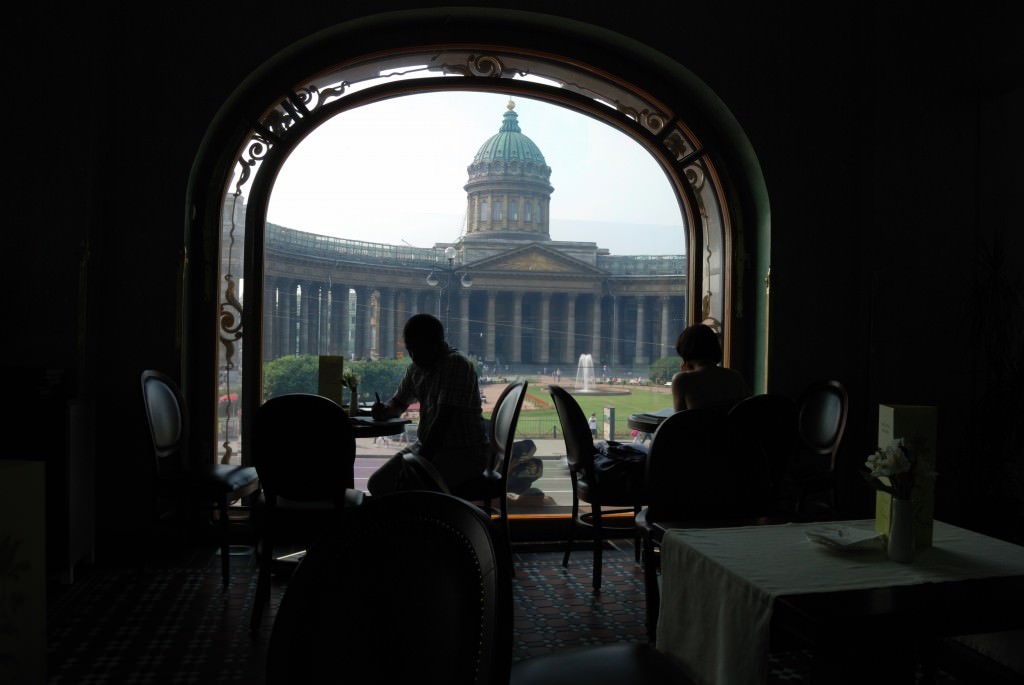 Just up the street, bridges span yet another canal, the Moika. This one is flanked by the Strogonov Palace, formerly home to one of St. Petersburg’s most powerful families. White bunting over a pale-pink exterior gives it the look of a frosted cake. The building was recently restored and re-opened as part of the Russian Museum, and shows fine art and cultural artifacts in rotating exhibitions (Nevsky Prospekt 17).

Continuing up Nevsky leads into the heart of St. Petersburg’s political history. Decemberists Square, also known as the Palace Square, has been the site of uprisings and revolutions. It was here that a group of Russian military men rose up in favor of a more representational government, and were subsequently exiled to Siberia; their movement, known as the Decemberist Uprising, gave the plaza its nickname. In 1917, revolutionaries gathered here and stormed the Winter Palace as part of the Bolshevik Revolution. Now, it serves as the dramatic entryway to the Hermitage Museum.

The plaza seems vast after the crowded sidewalks of Nevsky Prospekt. In its center, the Alexander Column rises, a reddish behemoth topped with an angel. In the distance gleams the gold spire of St. Isaac’s Cathedral. 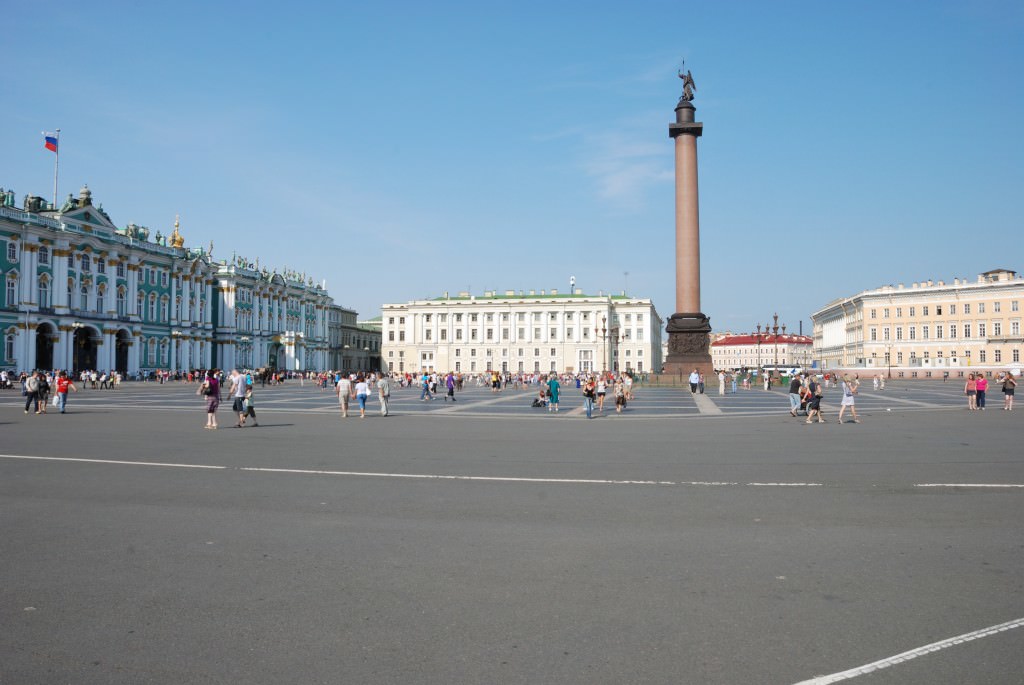 It is here that Nevsky Prospekt terminates. The street empties into Admiralty, a peaceful district that houses the naval college. Parks, the riverfront, and cafes make Admiralty an enjoyable neighborhood to stroll. Fishing boats line the waterfront, and vendors sell sailor hats and naval trinkets. Having walked through the historical and commercial artery of St. Petersburg, you have arrived at its heart: the choppy Neva River, sloshing its way down to the Baltic Sea.

Written by Caitlin Dwyer and photos by Matt Bozigar for EuropeUpClose.com

Next late November I'll spend a week in St Petersburg. The colorful description of Nevsky Prospekt got me even more excited about my trip. Very well put. It will surely help me to better savor the genuine essence of this magnificent city.