Just what was it that brought me to Nesebar, Bulgaria? Well, for one, I love the Black Sea. I caught my first glimpse of the Black Sea when visiting Turkey. A trip to the towns of Amasya and Samsun revealed a surprisingly beautiful landscape, with dense, green forests, pastures, poppy fields, and apple orchards strung along the shore line of a sea which was anything but black. 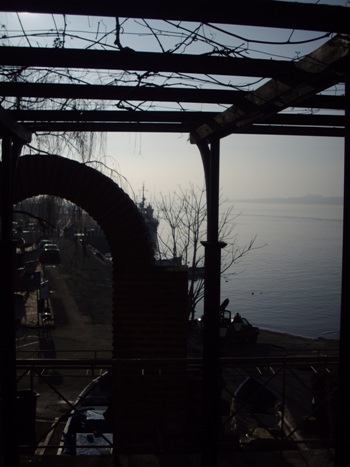 Where, I wondered, did the name come from? There are, in fact, several explanations and here are just two: Black Sea in Turkish is ‘Kara Deniz’ (Deniz means sea and kara means north.) Apparently, the name was given it by the Ottoman Turks. A more sinister explanation equates the Black Sea with the Sea of Death. Ships unexpectedly caught-up in fierce storms went down because there are no islands in the Black Sea or safe harbors where they could seek refuge .

Be that as it may, with snow covered mountains looming in the back ground and nearby historical monuments spanning thousands of years, literally one stacked upon another, the Black Sea and its surrounding area is like no other sea or ocean I have visited before. Impressed and fascinated by what I saw in Turkey, I decided to expand my exploration and visit other countries which border the Black Sea. As is often the case with my travels, this was a spur of the moment decision and, not wanting to endure the red tape of applying for a visa to Russia, I decided to visit Bulgaria. A little research revealed Nesebar, dubbed the ‘Pearl of the Bulgarian Black Sea Coast’ and a world heritage site to boot. 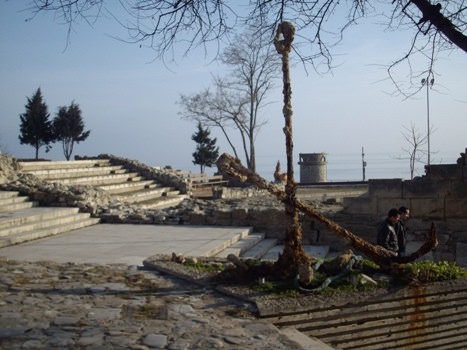 Living in Istanbul, as I have been, provides the advantage of being able to visit nearby, intriguing, beautiful countries like Greece and Bulgaria which can easily be reached by long distance coach. Yes, there is no need to face the airport hassle. I just hopped on the next bus headed for Sofia, with a stop in Burgas in between. Burgas is a major town, about 8o miles from Nesebar, my final destination. I planned to spend the night and then hire a car for my continuing journey. 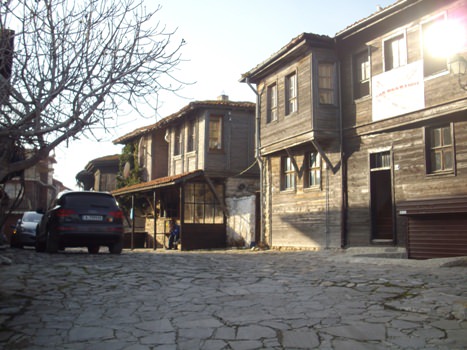 It was a six hour bus ride which I would have preferred to do during the day, but the bus time table wasn’t on my side. I got my first surprise, when we crossed the border into Bulgaria. What, so far, had been a smooth and well illuminated highway, turned into a dark, winding two lane road that was full of potholes. When a few feeble lights and some buildings, all  shrouded in dense fog, came into view, the bus stopped and the driver called to me: ‘Burgas’. Before I knew what was happening, I was unceremoniously dropped in what seemed to be the middle of nowhere in the middle of the night. Fortunately, I had made a hotel reservation in advance and I knew that my hotel was just opposite the bus stop. Just as well, because squinting through the drizzle and fog, I could just about make out the neon sign with the hotel’s name and I hurried across the road.

What started out as a rather depressing  experience turned into a wonderful adventure the very next sun shinny day. As I sat in my little hire car which was pointed in the direction of Nesebar, I drove through vineyards, forests and pastures with fat, black and white cows. Bulgaria is known as the country of wine and roses and I could only imagine what it would be like when the vast plantations of rose fields were in full bloom (not to mention the fragrant scent.) 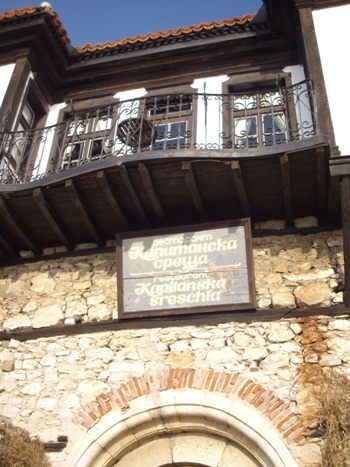 As I approached Nesebar, I began to understand its reputation as a city museum which bears witness to 3000 years of history and civilization. An abundance of temples, churches and other remains have been unearthed within the confines of the old town which perches on a peninsula jutting out into  the Black  Sea. The peninsula was originally an island, but is now connected to the mainland by a man made small causeway over which you make your way into Old Nesebar.

I parked the car right beyond the causeway and proceeded to explore Nesebar on foot. The first impression is one of romantic tranquility. Cobble stoned streets and alleys spread out in several directions and are lined with the typical Bulgarian white and black houses made of stone and timber. Many of them lean into the street at precarious angles. Shops selling every thing from antiques to souvenirs to clothing, occupy the ground floors as do inviting restaurants which offer a variety of the freshest fish and sea food as well as Bulgarian specialties. Bulgarians are avid coffee drinkers so you can expect a wide choice to include filtered coffee, Turkish coffee, latte, cappuccino and everything in between. If you must, you can have tea too, but don’t expect anything not made from tea bags. 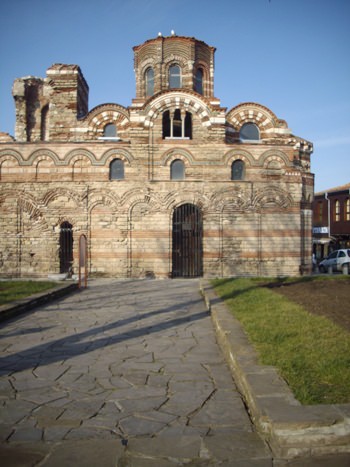 Originally a Thracian settlement, Nesebar became a Greek colony in the 6th century BC. Remains of the Hellenistic period which can be admired today include an acropolis, a temple of Apollo and the agora. After a brief period of Roman rule, Nesebar became one of the most important strongholds of the Byzantine period in the 5th century AD followed by the conquest by the crusaders in 1366 and the Ottomans in 1453. Subsequently, Nesebar became a Greek fishing town. Each and every one of the occupiers left their monuments behind, most prominently the churches and temples which were built from the Byzantine period foreward. Nesebar also contains a good number of wonderful wooden houses which date back to the Ottomans.

While walking the streets of Nesebar, you encounter church after church (with St. Sophia and the Church of the Virgin being just two examples) of the close to 100 churches which have been discovered on this small island. Given the abundance of historical monuments it doesn’t come as a surprise that Nesebar was declared a World Heritage Site by UNESCO in 1983.

Several hours later, while studying maps and destination information, I was happy to discover another beautiful place on the Black Sea which prompted me to satisfy a desire to go on an extended trip to Russia, visa formalities not withstanding, and begin planning a round trip to Yalta.

Inka, I've been on that bus ride - only in the opposite direction! You brought back memories of those crazy roads and being let off instead in Istanbul's insane otogar. What a welcome! As for the Bulgarian Black Sea, we chose Sozopol instead, but Nesebar was in the running (wanted to avoid the Sunny Beach-ish ones at all costs). Now I want to go back to check it out. And also the Turkish Black Sea - your descriptions are lovely.

I love reading about places I've never heard of before. Nesebar looks like a beautiful place to visit.

Another excellent story Inka.  I knew a young Egyptian crew of a tanker that almost sank in a storm in the Black Sea so I understand what that meant. But it would be nice to view the countryside without the storms.  You gave us a very clear and intriguing picture of it.