Scotland has scores of museums, all of them interesting, but the National Museum of Scotland, in Edinburgh, is truly exceptional. Its collections of thousands of objects cover natural history, world cultures, geology, archaeology, science and technology, and of course the entire story (pre-history included) of Scotland. The museum is set in the heart of the city, on Chambers Street near the George IV Bridge, and combines two buildings: a grand Victorian from the 1860s, and a modern structure that was completely refurbished and reopened in 2011. 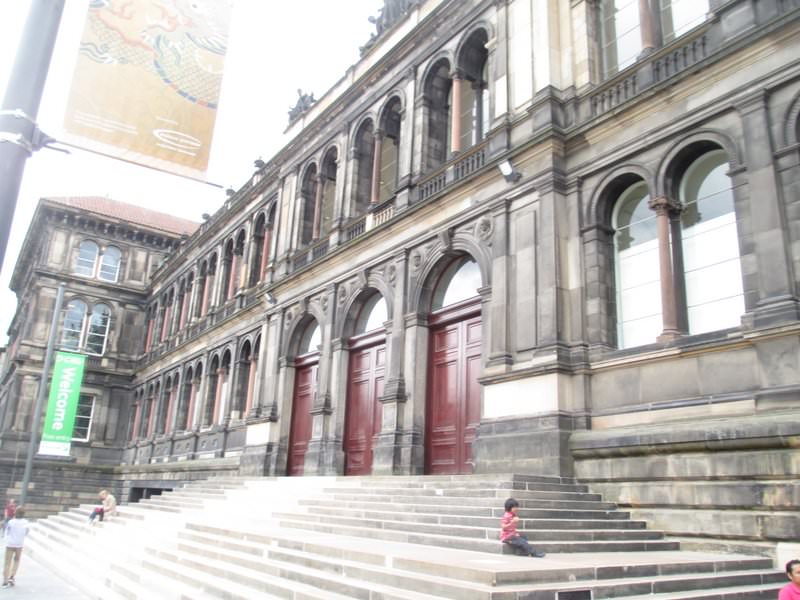 Victorian building, once the Royal Museum

The re-do cost millions of pounds, and the result is impressive. On a recent tour, I quickly learned that one visit isn’t nearly enough to take it all in; fortunately admission is free (there’s a donation box) so it’s easy to return again and again. The museum is handicapped-accessible. 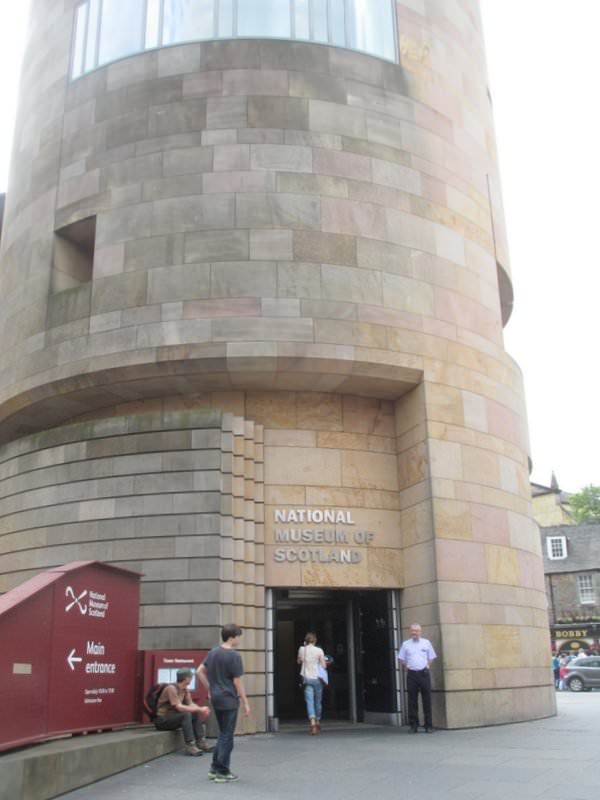 The modern building and National Museum of Scotland entrance

The entrance opens to the Grand Gallery, a light, open atrium with soaring pillars and high windows. Windows on the World, rising four stories, is the largest single museum installation in the UK. Around the atrium, objects are displayed on three levels, each holding a portion of that particular exhibit’s theme. For example, in the Natural History section at the east end of the hall, the lower level has life-size animals, from a T. Rex skeleton to jungle wildlife. The tiger is posed mid-strike, the elephant stands majestically huge, and the giraffe’s neck and head gaze into the gallery’s second level. Swimming and flying creatures are displayed at the higher levels, from where you can also look down on the animals below. The Animal Senses gallery shows how animals communicate, while Survival illustrates ways in which they’ve evolved. Along the way are various interactive devices that allow visitors to get a hands-on feel for the array and increase their knowledge. This is a great place to take the kids. 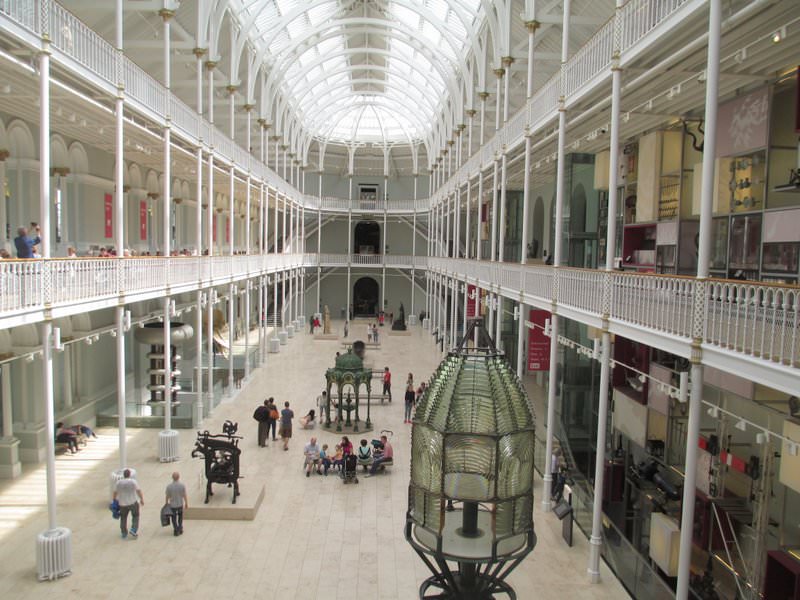 Rooms lead to other rooms off the main hall. The Discoveries gallery holds objects connected to Scots who were inventors, explorers, and adventurers. Other galleries reveal Scottish life, arranged chronologically, from Paleolithic times through the 18th century and into modern times. Who wouldn’t want to see Bonnie Prince Charlie’s silver picnic set, carved Viking chessmen, or space age sculptures? World Cultures gallery displays some of the museum’s oldest and most significant historical collections, showing people and possessions from around the globe. 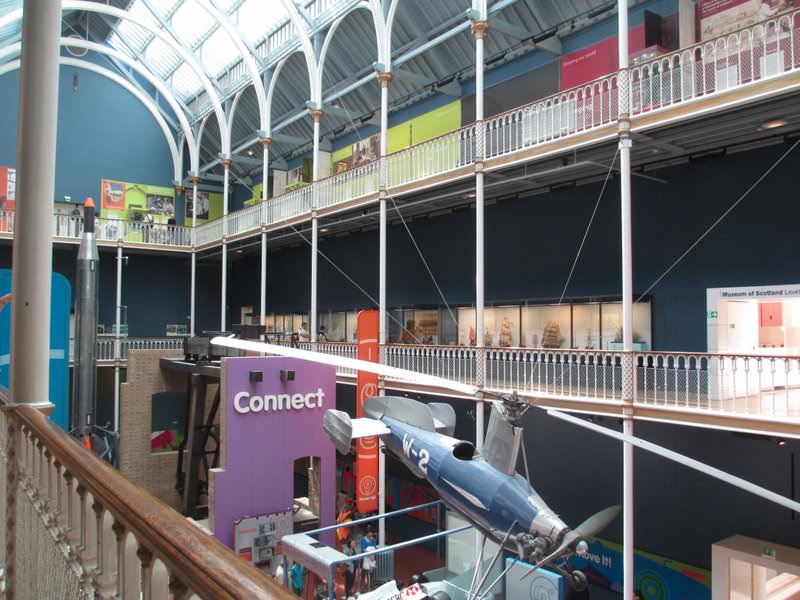 One of several galleries in the National Museum of Scotland

Rather than attempt to describe each themed exhibit, I’ll mention a few of the myriad objects. They include a 12-foot-long South Pacific feast bowl, intricate whale bone scrimshaw, a Uganda coffin shaped like a Mercedes-Benz, Celtic brooches, the oldest color television set, ancient Roman cameo glass, a Maori war canoe, Balinese masks, a weaving loom showing how tartans are made, a 15th- century harp, and a 10-meter-high animated clock tower that is a wonder to behold. Add several thousand more intriguing items and you can imagine what awaits. 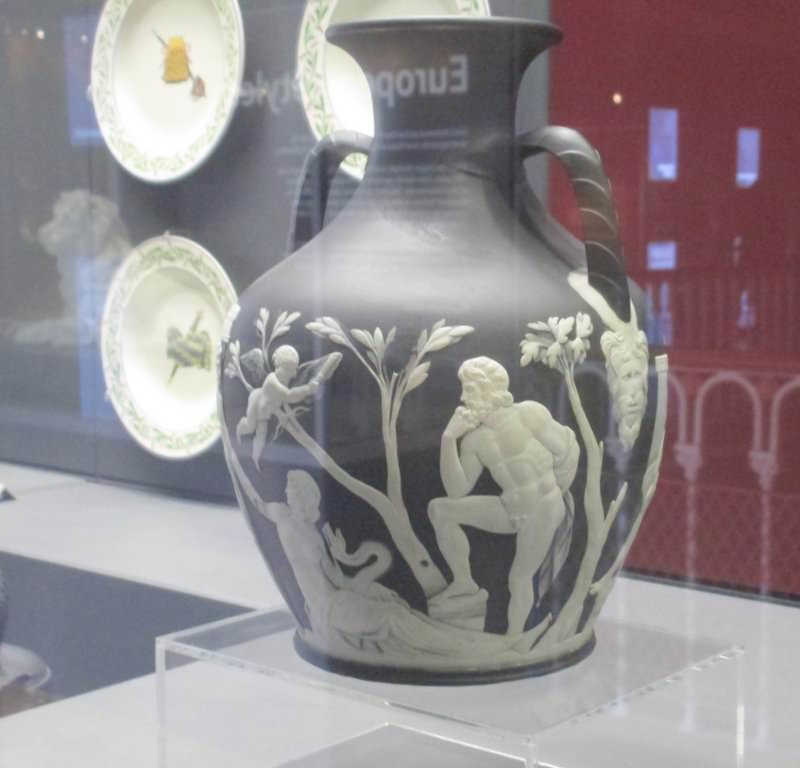 It may sound like a mishmash, and in some ways it is, as there is a dazzling amount to see and, although it’s artfully arranged, it can be hard to make coherent sense of the museum. I did not find the printed guide to be very useful, but allowing plenty of time was a help. Probably the best way to get the most from a visit is with one of the free guided tours, which are held several times a day. Whatever way you choose, this is a museum not to be missed. 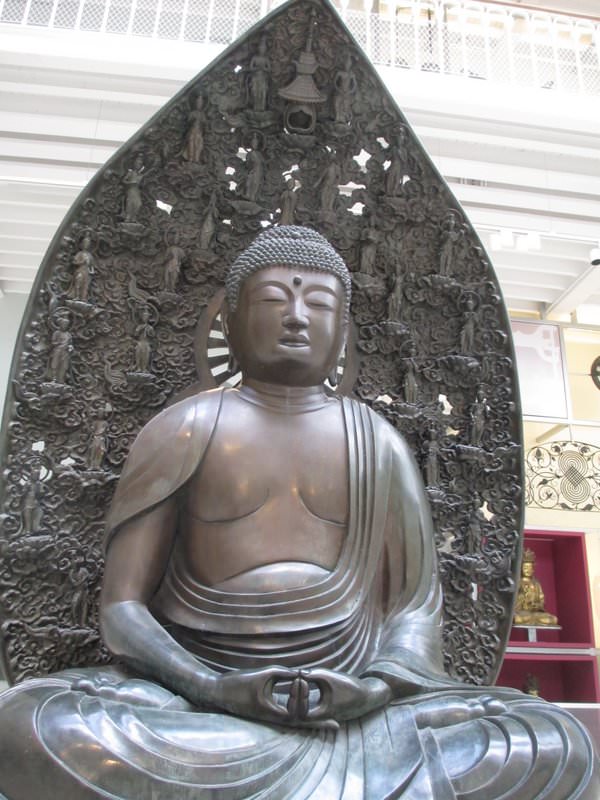 Buddha statue in the Grand Gallery

The National Museum has three places to eat. Near the main entrance, Museum Brasserie offers full meals and Scottish specialties such as haggis, haddock and chips, mushy peas, and salmon cakes. Upstairs, overlooking the Grand Gallery, the Balcony Cafe is a nice spot for a tea and snack break. The highly reputed Tower Retaurant, on the rooftop terrace, has won awards for its food and 150 wines and is a fine vantage point for views of Edinburgh Castle and the city. It serves brunch, lunch, and dinner.

A few sections of the museum are closed during the development of ten new galleries scheduled to open in 2016. Meanwhile, there is plenty to explore and experience before your return trip to see what’s new.

Thank you! This is a wonderful travel site to write for and to read. I always learn from the diverse stories.

This gal can really write and I hear she's quite good looking. More of her, please.

She is one of our best writers.