Traveling to Montpellier to study French was one of the smarter decisions I’ve made. By the time I left the EuroLingua Institute and said au revoir to the friends I’d made there, my confidence in speaking French had grown by leaps and bounds. And I had fallen in love with Montpellier. 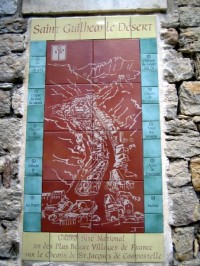 With about a quarter million people, Montpellier is France’s 8th largest city, and it is just a three-hour TGV train ride from Paris. It’s the capital of the Languedoc-Roussillon region, on the River Lez , six miles inland from the Mediterranean coast, and close to medieval villages such as the quaint (and over-touristed) St. Guilhem le Désert.

Montpellier’s prime location made it a prominent trading center in the 10th century, with links around the Mediterranean. It was noted for its tolerance, with Jews, Muslims, Catholics and Cathars co-existing peaceably – for a time, at least. It has been a university town since the Middle Ages, and today some 90,000 students fill six excellent public universities, keeping the street life fresh and lively. The center of the action is La Place de la Comédie, the main square, which features a spraying fountain and busy cafes. Every weekend brings another artisan fair, musical performance, or book sale to the square. 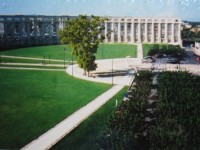 A wide esplanade, 17th-century buildings, and narrow winding streets mingle with modern attractions such as an indoor Olympic-size swimming pool, a skating rink, and a planetarium. Along with the oldest botanical garden in France (established in 1593), the Jardin des Plantes, is the recently built La Serre Amazonienne, part of the Montpellier Zoo. This state-of-the-art collection has an aviary, thousands of tropical plants and trees, and numerous animals, all in a replica of a rain forest. The residents of Montpellier take great pride in their philharmonic orchestra and an opera company, as well as annual festivals of dance, film and music. The summer Festival of Radio France features classical, jazz, and opera music, with about 150 events held in courtyards around the city and in the modern concert hall, Le Corum. 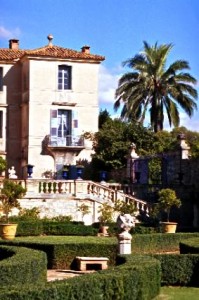 After extensive renovations, Musée Fabre opened not long ago with impressive displays of paintings from the 17th through the 20th centuries. It’s elegantly done, showing works by greats such as Nicolas Poussin, Eugene Delacroix, Alfred Sisley, and Edgar Degas. There are 18th century sculptures and a wing of contemporary art. For a peek at art and life in a splendid chateau, you can visit Chateau de Flaugergues. The owners of this lovely place outside of Montpellier welcome visitors and offer wine tastings. Check the video tour of the chateau on their website.

Montpellier’s architecture is an interesting blend of old and new. The cathedral, St. Pierre, dates from the 14th century, while an impressive triumphal arch was built in 1692. Then, from the centuries-old buildings around the central square, a few minutes’ walk toward the River Lez takes you to the Antigone District. This very modern and beautiful housing development, with neo-classical features, was designed by the noted Spanish architect Ricardo Bofill. When I was taking language lessons, I stayed with a family in their Antigone apartment, It was a perfect arrangement, with gracious hosts.

There are plenty of hotels in Montpellier. A good choice if you want to be close in, only a five-minute walk from La Place de la Comédie, is Hotel d’Aragon. It is comfortable (though has no elevator) and the staff is kind and welcoming. Further from the heart of the city, but still within easy walking distance, is Hotel du Parc. This quiet spot offers pleasant, clean rooms and fine service.

Restaurants cover the gamut, from inexpensive sandwich shops to one of the greatest restaurants in southern France. I like Le Bouchon St. Roch (great raspberry tarts) and L’Ecrin d’Anais, both offering excellent food at reasonable prices.

Wow- your article took me back to when I lived in the south of France. I loved exploring Montpellier as well.