Sometimes, no matter how organized you are and how precise you make your plans, things just don’t work out. I went to Samos, Greece specifically to visit the ancient Temple of Hera and explore the famous underground Tunnel of Eupalinos. I took an early bus from Vathi to Pythagorian so there’d be plenty of time to visit both archaeological sites. 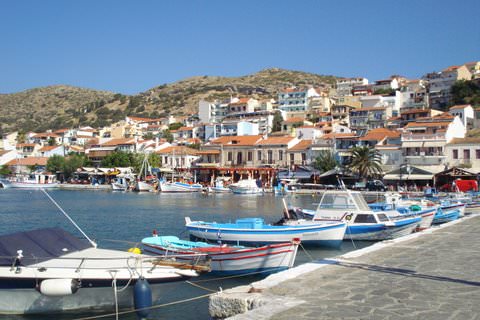 When I arrived, I walked down to the harbour to take photos of the impressive statue of Pythagoras at the port. Pythagoras (570-495 BC), for whom the town is named, was an Ionian Greek philosopher and mathematician who founded a religious movement called Pythagoreanism. The town is a designated UNESCO site and also the site of the main tourist resort on the island with an impressive yacht harbour. There are several archaeological sites worth visiting in the area.

To begin with, I explored the old Castle of Likourgos in the town,where there’s a small museum. Then I stopped by the tourist office to inquire about buses to the Temple of Hera at nearby Ierion, and the Ephpalionos Tunnel, an incredible engineering feat built in the 6th century 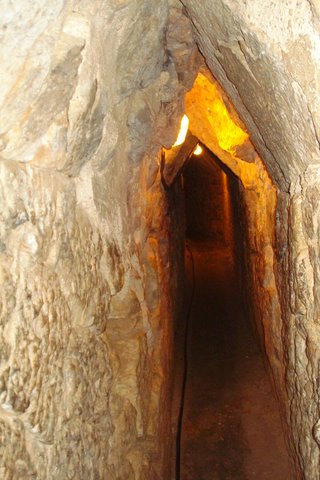 BC which is just outside the town. The young woman in the tourist office told me there was a bus to Ierion. “But you can walk to the tunnel,” she said  “It’s just up the road!”

A friend had suggested it was best to take a taxi to the tunnel, however the woman made it sound like an easy hike, so I set off by foot and followed the signs on the roadside that indicated the direction I should go up to the highway.

The Tunnel of Eupalinos was built under the direction the engineer Eupalinos in the sixth century BC to serve as an aqueduct to carry water under the mountain from an inland spring.  Because the aqueduct ran underground it was protected from possible invaders. It carried water through pipes in a trench several metres below the tunnel floor. The tunnel was used for a thousand years, rediscovered in 1882, and is truly an engineering wonder!

It was a blazing hot day. With all my experience, I should have known it was foolish to attempt a hike like that in the midday sun with temperatures hovering at 40C. But determination got the better of me and I kept walking…and walking…and walking. I assumed I was going the right direction. There were no indicators, neither were there other pedestrians I could ask. Eventually, when I was almost ready to collapse from heat stroke, I decided it had all been a mistake, and headed back into town. Sure enough, there was a sign (pointing away from the direction I’d come) indicating the tunnel was up the top of the hill! 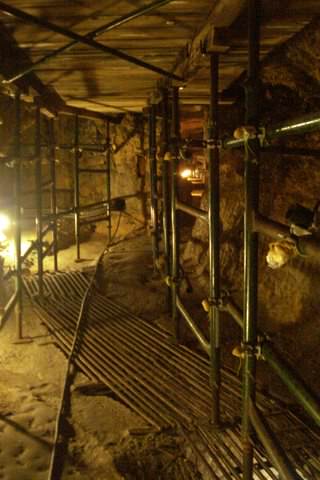 I’d had enough walking, so I made my way back into town and caught the next bus to Ieorion.  When I arrived there, I asked a shop lady how to get to the Temple. “Oh, it’s just up the road!” she said, waving her hand in the direction of the town outskirts. “It’s not far!”

The Heraion of Samos was once an important sanctuary. It was the first of the gigantic free-standing Ionic temples, built on the site of an 8th century BC temple. The site, with its sole standing column, is a designated UNESCO World Heritage Site.

Again, I trudged along the burning, dusty road without seeing any sign of an archaeological site.  Finally, I turned back to town and went to a taxi stand. If there is a taxi in Ieorion, there must have only been one as several other people were waiting and none came. Eventually, I gave up and took the bus back to Pythagorian. I didn’t even catch a glimpse of the Temple of Hera.

At Pythagorian, I took my friend’s advice and asked a taxi driver to drive me to the tunnel. He wasn’t too enthusiastic and kept insisting the site was closed as it was after 3 pm. However, I had a brochure from the tourism office that said it was open until 5 pm. He begrudgingly drove me there and reluctantly agreed to wait for me to go in and take a few photos.

The entrance to the tunnel is exceptionally narrow, so if you happen to be a large person or one suffering from claustrophobia, you would be wise to think twice about manoeuvring through it. I managed to squeeze myself down without getting stuck. Once you enter the main part of the tunnel it’s much like going into a coal mine. The air felt cool after that blazing day in the sun. I walked along a little way just to get the sense of how amazing this structure is. The 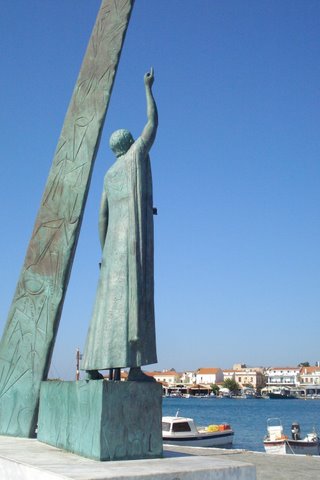 tunnel is 1,036 m (3,399 ft) long and extends right under the mountain. Imagine the man-power it took to construct it, using only primitive tools!

When I emerged less than 10 minutes later, the cab driver was waiting to drive me back into town (a five minute trip!) as agreed. He charged me 15 Euro for the excursion, probably twice as much as it should have been!  By then I was too exhausted to argue. At least I had visited one of the archaeological sites I had come to Samos to see.

One thing learned from this “misadventure” was not to rely on the directions you are given even if they are from a tourism agent or a local resident. This was emphasized two days later when I went to catch the ferry back to Piraeus. My ticket was stamped with a particular ship’s name. I took the travel agent’s word that this would be the ferry I’d board. I waited at the port and saw only one other ship loading but it wasn’t the one named on my ticket. Finally, just before the ship sailed when I realized there was no other ferry in sight, I asked a port policeman if there was another boat arriving. He looked at my ticket and said, “No! That’s your ferry!” I had to make a run to board it and got on just before they pulled out of port.

After this I’ll have a map and proper directions, and I’ll double check at the tourist offices to make sure they have the correct ship’s name printed on the tickets.

In spite of the near disasters and disappointments, my stay on Samos was pleasant and I did enjoy several other excursions that were not so difficult to find.

how frustrating - it would have been so much better to sit in the cool shade of a cafe, if you'd have known. glad you got to see SOME things!