Back in the 17th century, Meknès was the largest fortified city in North Africa. Its powerful ruler, Moulay Ismail, had plenty of slave labor to build his vast palaces and gardens, as well as 25 miles of thick walls and monumental gates. History declares the sultan a ruthless tyrant, but he did guarantee peace and order. 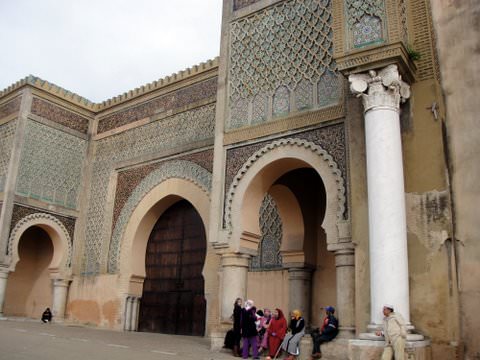 (There’s apparently no record of just how peaceful it was in his harem of 500 wives.) A few remnants of Moulay Ismail’s vision of the greatest city in Morocco still stand. Parts of the massive walls, storehouses, stables, and gates remain.

Meknès lies west of Fès, at the foothills of the Middle Atlas mountains in northern Morocco. The city is lesser known than Casablanca, Fès, and Marrakech, but it has a lot to offer. We started at the biggest and most famous gate, Bab el-Mansour (“bab” means gate in Arabic).  It’s a Meknès landmark of white marble, stone, wood, iron and colorful tile. We decided against a horse-and-carriage tour, though that’s a good way to see the city’s highlights, but 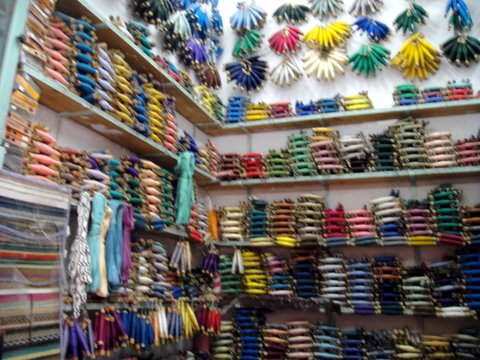 with honking traffic swirling around us, we clearly needed a guide in this ancient city. Several quickly offered their services. We chose friendly Mohammed for a brief tour of the medina, at a cost of 40 dirham, about $5.

Mohammed said there were two old-quarter medina sections, Arab and Berber, and he would take us to the Berber, for the best authentic quality. We weren’t surprised to learn that he is a Berber, descended from the indigenous native North Africans. 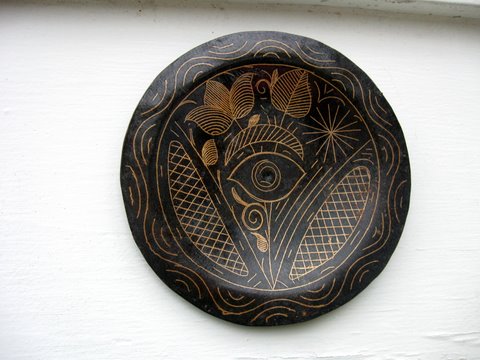 Mohammed led us across bustling El-Hdim public square and into the twisting narrow lanes lined with souks (shops). As someone said, “In Morocco, between two shops there is another shop.” There were silk makers and potters, cedar carvers, woodworkers, and a small mosque with carved, painted doors. Our guide stopped at a damascene shop where silver thread is engraved on steel in elaborate designs. The damascene maker demonstrated his work, and after a bit of the expected bargaining, we bought a small plate. After we left, Mohammed ducked back into the shop, no doubt to collect his commission.

As we walked on, he pointed out the baskets, ceramics, and incredible array of vividly colored silk threads in a weaver’s shop. At one corner the air rang with the sound of hammers on metal; on another we caught the rich scent of leather from the saddles and bags at the leather makers. The food stalls displayed piles of scented 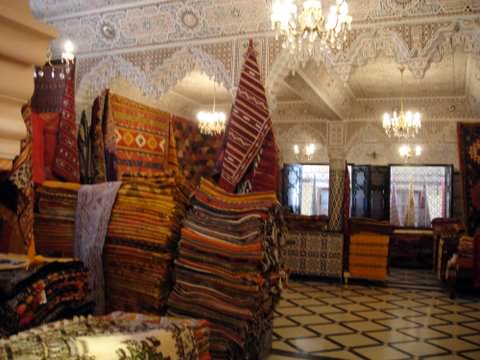 Our next stop looked tiny, but when we climbed the stairs, we were in a large tiled room with hundreds of gorgeous carpets piled under crystal chandeliers. Berber Kilim carpets, we were told, have a cotton warp and a wool and silk weft. They’re woven in intricate, colorful designs, with new ones created every two years.  After our immersion in carpets, our guide took us to an embroidery shop, where we were assured that the delicate stitchery on linen was handmade by Franciscan nuns. Our time was up, so we left Mohammed with a nice tip (but not much commission for him today) and went on to other sights.

Meknès has many mosques, off limits to non Muslims. Plans are underway for restoring and protecting them,  more urgent now, since a minaret crumbled and fell in February, 2010, killing a number of worshipers.

Food and Wine in Meknès

The Meknès region boasts fertile land, abundant crops, and excellent wines. During the French occupation in the last century grapes were planted, and the wines produced have become known for their quality. Just outside the city, green valleys and rolling hills are covered with olive trees, poppies, and yellow mustard. The sight is a rarity in dry, rugged, and mountainous Morocco.

Riad d’Or is reputed to offer the best in Meknès food and lodging. It’s a beautifully renovated old mansion known for its excellent food and service.