Free access to the treasures of the world is the splendid gift offered every visitor to the British Museum. When you pass through the Greek-temple facade in the Bloomsbury district, you’re entering a shrine to human endeavor, history and art.  Some 7 million objects from all continents are exhibited in the museum, showing human culture from pre-historic times to the present. 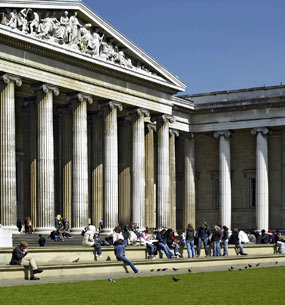 Those who revel in the wonders of the museum can thank Sir Hans Sloane. Sir Hans, who lived from 1660 to 1753, was a noted physician who’d been collecting curiosities and plants since childhood.  He found hundreds of items during his travels and carefully cataloged them. (He also brought drinking chocolate to England after finding cocoa in Jamaica. The drink he created was first sold by London apothecaries as a medicine.) 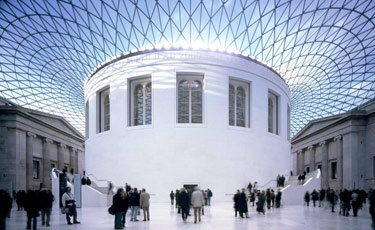 Sir Hans Sloane bequeathed his collection of books, dried plants, prints, Oriental antiquities, and much more to England; and with King George II’s royal library it became the start of the British Museum, in 1759.  Since then, the museum has continually expanded. The most recent development is the spacious, glass-roofed Great Court, built in 2000 to surround the Reading Room. The Reading Room holds some 25,000 books focusing on world cultures and is currently used for temporary exhibitions.

There is so much to see in the British Museum, it helps to have a list of highlights for your first visit. Here are just a few:

Rosetta Stone
This 45-inch standing stone has profound historic importance. Carved in 196 BCE in Egypt, and discovered in 1799, it was the key to understanding hieroglyphs and the language of the ancients.

Mummies
The largest collection of Egyptian mummies outside Cairo.

Assyrian Winged Bull
A colossal statue of a winged bull with a bearded human head, it is 16 tons of alabaster.  It once guarded the fortress of King Sargon II in ancient Assyria.

Tomb of Ur helmet
A gold helmet from Mesopotamia, dating from about 2600 BCE.

Lewis Chessmen
These 12th century figures, carved from walrus ivory, are probably from Scandinavia. They date from the 12th century. 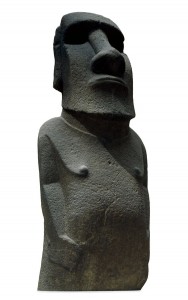 Easter Island Statue
Hoa Hakananai’a, set on a platform, towers over visitors. This basalt statue is haunting in its mystery and expression. It dates from 1000 CE.

Thousands of other objects are displayed in the various sections. In the Americas area, you will find intricate mosaic masks, drums,  pottery vessels, feather bonnets, and delicate gold pendants.  The Egypt rooms hold the immense bust of Rameses II, tomb paintings, papyrus calendars, and mummies of cats and crocodiles.  Objects of jade, bronze, silk and ceramics fill the China rooms.  There’s a money gallery holding one of the world’s great collections of coins and notes. Curled in a dim corner lies Lindow Man, a body 2000 years old, preserved in a peat bog and looking like preserved leather. 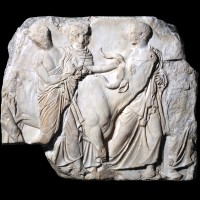 Controversy surrounds several displays, such as the Elgin Marbles, which were taken from the Parthenon in Athens. Greece wants its historic monuments returned and so do some other countries.

The British Museum is located on Great Russell Street in Bloomsbury. It is open 10 am. to 5:30 pm (8:30 pm on Thursdays and Fridays). It’s open daily except January 1; the Friday before Easter; and December 24, 25 and 26. Admission is free except for some special exhibitions. There are several cafes in the museum

Loving London on a Budget

[…] gallery to awe you. Want to see priceless treasures such as the famous Rosetta Stone? Head for the British Museum. Fancy viewing cutting-edge art installations? Make your way towards the Tate Modern. The scale and […]

Love the British Museum. Probably the best museum in the world. On principle, though, I think they (as well as other Western museums) should return artefacts to the country of origin (providedm, of course, they can and will preserve properly AND share with the world).

Meanwhile, I'd love to bring a sleeping bag and camp out in the British Museum. In the mummy room :)