In multiple visits to Paris over the years, I had only been on the river that runs through its heart once – during my first trip, with a group of fellow students from my study abroad group, and it was as cookie-cutter clinical as you’d expect. I’ve since read about (and seen) the Seine dinner cruises that overflow with passengers during the summer, but frankly nothing about eating a meal when there’s a clock ticking seemed appealing to me. Sure, you get to enjoy great views of Paris while you eat, but neither activity gets the attention (or time) it deserves – especially in a city as beautiful and well-known for food as Paris.

Imagine my surprise, then, when one of my Parisian cousins suggested we go on a Seine dinner cruise during my most recent visit. I knew that one of his sons was co-owner of a cruise company in Paris, but I assumed it was one of the big touristy boats that no self-respecting Parisian (let alone indie traveler) would be caught dead on. Oh, how wrong I was.

My cousin’s company, Le Capitaine Fracasse, offers the same kind of service as the cruise companies you’ve probably heard of before – a couple hours on a boat gently floating through the center of Paris while you’re served dinner. But Le Capitaine Fracasse caters not only to foreign visitors, but to Parisians.

You read that right – there’s a Seine dinner cruise that the Parisians take. 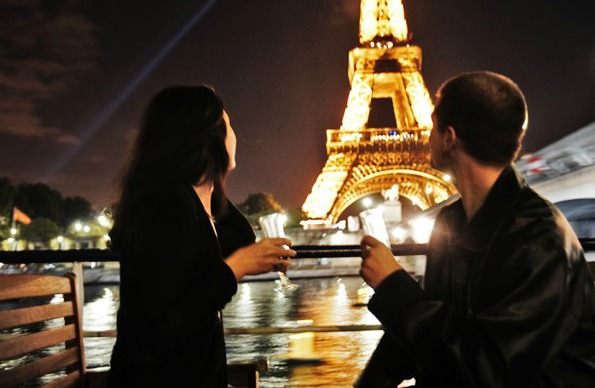 Le Capitaine Fracasse dinner cruises operate boats that are notably smaller than some of the other, more touristy options. The dining room is elegant, with huge windows on all sides, and the rooftop deck is ideal for taking in the panoramic view of Paris. The two-hour cruises allow diners to have a slightly more leisurely experience (many dinner cruises are closer to an hour), which means you can get up between courses to take in the view rather than feeling stuck at your seat eating as fast as you can.

Speaking of the food, I’ll admit I didn’t have high hopes – food prepared on a boat has its limitations, I assumed. Here, again, I was wrong. The food was really great, and my cousin proudly told us how everything is prepared fresh every day – including the foie gras appetizer topped with homemade orange marmalade. The menu changes seasonally, and diners are given a choice between three main dishes (when I visited the options were veal, beef, and salmon). The appetizer and dessert courses are set in advance, but even here you’re not limited for choice – waiters deliver plates with small portions of 3-5 different things, each one giving you a few bites’ worth. And throughout the meal, staff comes around regularly to make sure your wine glass is properly filled.

For many travelers with limited time in Paris, the one-hour cruise option may seem like the better idea – but then you risk wasting what could otherwise be a great meal in Paris on a mediocre “factory restaurant” boat (as another cousin put it). Those of you who prefer to dine at a more leisurely pace anyway will appreciate what having an extra hour does for your ability to enjoy both the meal and the view, and you’ll no doubt agree that “saving money” on a cruise with mediocre food is being penny wise and pound foolish (especially after you paid handsomely for your international airfare to begin with).

Not only that, a dinner cruise with Le Capitaine Fracasse means you’ll be surrounded by Parisians – celebrating something, hosting out-of-town guests – which is what we want when we visit Paris, isn’t it?

As mentioned, Le Capitaine Fracasse cruises run twice on most nights (the specific times vary depending on the time of year), and the round-trip is two hours. There are also lunch cruises available as well. The ships are docked on the Ile aux Cygnes near the Bir Hakeim metro stop. There’s a dedicated parking lot for Le Capitaine Fracasse guests, but be warned it’s quite a distance from the boat, so give yourself plenty of time to walk there. Prices range from €50 (for dinner with no drinks included) to €80 (for dinner with wine and champagne), and they’ve just added a new “Grand Cru” option for €90 that includes even better wine and champagne with your meal.

You can book a Le Capitaine Fracasse dinner cruise online, although the website is easier to navigate if you speak French. The English translation button leads to a Google-translated version of the page, so it can be slightly cumbersome, but it still works. If you have problems with the online form, you can also book via phone or email. It’s also worth noting that if you really can’t commit to a two-hour dinner cruise, the same company runs 3-4 one-hour dinner cruises per night under the Paris en Scene name. These cruises range from €29-49, and depart from the Pont Saint Michel.

While these companies are run by a member of my family, that has no influence on the fact that I recommend them without reservation, both for the elegance of the experience and the quality of the meal.

About the Author: Jessica Spiegel is a Portland-based writer, and a serious Italophile – but Paris will always hold a special place in her heart as the city where she first wandered alone, not speaking the language, and mastering the metro system anyway.