Follow me as I journey from the southern tip of Italy’s Puglia region all the way up to the Trento Alps. I’ll be focusing on budget-friendly travel, and I’ll rarely use a car. Along the way I’ll sample traditional foods, visit lesser-known ruins and cities, sample excellent wines, and visit local cooking schools, the entire two months living out of a backpack. . . 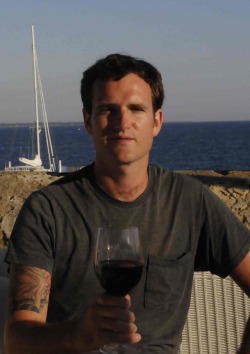 Fabio Ingrosso and I first met when he commented on one of my articles on EuropeUpClose.com. He is an internet marketing professional, as well as one cool guy, who focuses on promoting the Puglia region, particularly its wine, tourism, reggae dancehall festivals, and pizzica dancing. His wine blog Vino 24 (in Italian)  is one of the top 10 most popular wine blogs in Italy. This afternoon we met in a cemetery. It may not have been the ideal place, but it was the most easily findable landmark.

From there, we set out to find a trullo and shoot the video. Fabio saw a crew of workers trimming grapevines and pulled over. He asked if we could set up on the trullo on the property. They said it was ok, so we pulled out the gear, hiked up a hill covered with olive trees, and took a seat right on top of the trullo.

Afterward, we ran into the owner. She’d returned while we were filming. There’s no better way to describe her other than saying that she was a well-worn peasant woman. And she didn’t like us on her property. She demanded that Fabio delete the video or she would call the Vigilanza, a branch of the police. Fabio managed to quell her anger by deleting a few photos.

We then went back to my friends’ house and tried a couple wines. The Diciotto Fanali, a rosé by Apollonio Winery, was quickly gone, so we moved onto one of my favorite white wines made in Puglia: Cantina Santa Barbara’s “Ursa Major Bianco.” It is made with the international grape Sauvignon Blanc. It does not represent Puglia’s traditional native grapes, but it is wonderfully balanced. It is medium-bodied, with pineapple and chamomile on the nose, a nice balance of acidity, and a creaminess from malolactic fermentation. These components make it great for pairing with fruity green salads, saucy fish dishes, and barbecue chicken.

It was a pleasure spending time with Fabio. He’s a dedicated, hard worker who loves the area he grew up in.
In my next post, I’ll head north, to the city of Matera, in the Basilicata Region.

Hi Fabio---The pleasure was mine. I'm going to miss tasting at those wineries you mention.

By the way, Taurino has a new Primitivo that's worth checking out. Best---Mattie

Hi Michael---Thanks for commenting. It is absolutely a shame that I'm not seeing Sicily (especially since it's the most southern region of Italy). I'll be focusing on wine tasting throughout Italy, including Umbria and Tuscany, with inexpensive wines in mind.

Hi Mattie, it was a pleasure to taste that bottle with you near a trullo! Saturday I had a short trip into the Salice Salentino DOC are, visiting Candido Winery, Cantine due Palme and Leone De Castris ;)

It's a shame you're missing Sicily as its cuisine is quite distinct and you would definitely not get kicked off someone's land - they'd probably invite you to dinner then show you around their beloved island for the rest of the week! Still very much looking forward to the series. Are you going to be focusing on affordable wines as well as affordable travel?