I stepped off our coach bus unsure of what to expect out of our first stop in County Donegal along the Wild Atlantic Way – Irelands most famous Road Trip: 2,500 kilometers stretching from southern County Cork to the northwestern corner of Ireland. The weather was noticeably cooler than the hot September afternoons I had been experiencing back in Cleveland. Here, the winds were strong and the air as fresh as one would expect of a rural setting. Jackets were a necessity despite the strong sun beaming over the horizon. 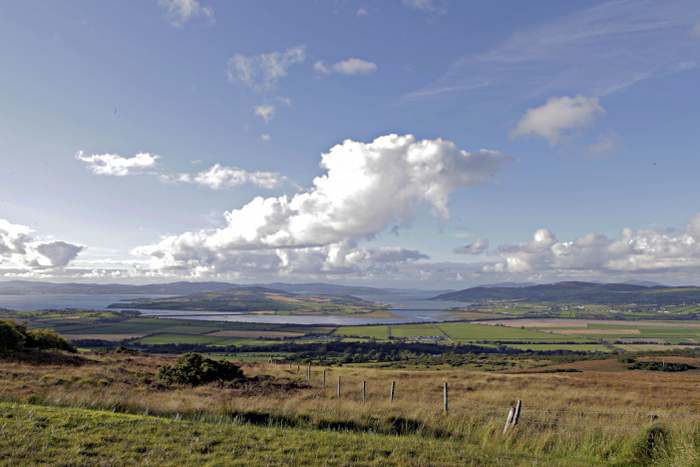 The view from the Grianan of Aileach in County Donegal

To begin our journey, I approached the stone fort known as the Grianan of Aileach. I noticed first and foremost its strategic positioning at the top of a hill with a panoramic view that reached out to the Northern Ireland border to the east and the Lough Swilly to the west. Ruins of this circular stone fort still stand, its place in history a mixture of history and legend. Some put its creation in the 7th or 8th Century and its destruction around the beginning of the 12th Century, possibly at the hands of invading Normans. 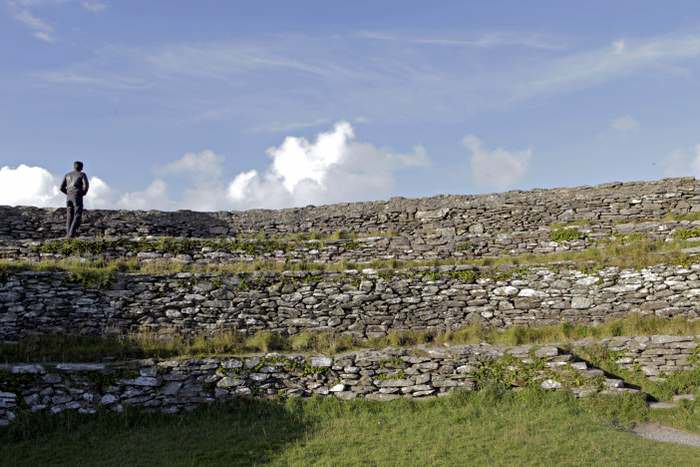 Inside the Grianan of Aileach

The Grianan very much encapsulated what I would later discover to be the theme of this multi-day trek around County Donegal on the Wild Atlantic Way. That is, a step into what many of the locals refer to as “Raw Ireland.” This is the cultural heart of Ireland where the Irish (or Gaelic) language is often on equal footing with English when looking at road signs. Musicians who play traditional Irish music are doing so for their neighbors and not for throngs of American tourists in Dublin’s famous (infamous?) Temple Bar neighborhood.

A trek through the Wild Atlantic Way leads one through an array of impressive castles and extravagant homes built by those who at the time could afford the costly luxury of living in rural Ireland. The Redcastle Hotel is one such example, which can trace its beginnings back to their original owner who died at the Battle of Kinsale in 1601. Then there’s the Rathmullan House where I stayed after a day of old fashioned pottery making with Moville Pottery and lunch with Ireland’s own Brian McDermott — better known on RTE television as “The No Salt Chef.” While watching a cooking demonstration and enjoying some tasty Irish soda bread, Chef McDermott explained that a pair of heart attacks at a relatively young age convinced him to rethink his diet. Today the busy chef allows the natural salt within his ingredients to do the work. Honestly, I wasn’t missing it for a moment as I magically made my plate vanish in a matter of minutes. 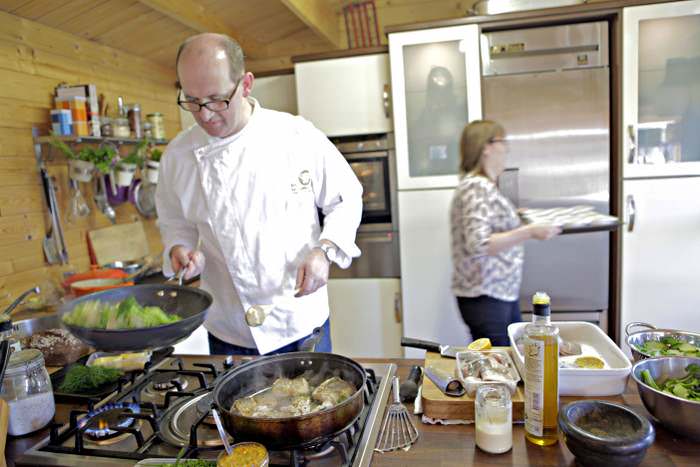 Back to the 19th Century Rathmullan House, I took in the wooded surroundings along the western coast of the Lough Swilly. This corner of the Emerald Isle has no shortage of beachy coastline, but with a more Canadian or Northern New England vibe than, say, South Beach. That evening I enjoyed yet another undeserved lavish meal at the adjoining Cook & Gardener Restaurant along with my first bottle of beer from Kinnegar Brewing Company — a local craft brewery I was set to visit the following morning. 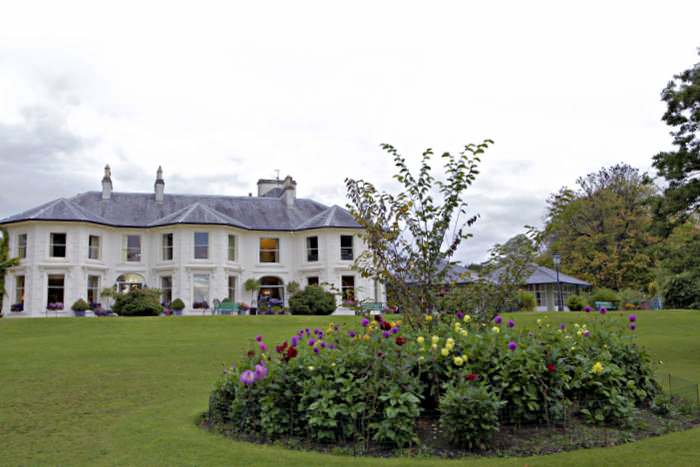 Yes, craft beer in the morning. Perhaps an early sign of trouble to some, but excused since I do often write about craft beer. Besides, who am I to turn down one’s generous invitation? Libby Carton greeted us outside the rural brewery setup much like a farmhouse. Already hours into her work, she offered a brief tour of the facility before turning to the important stuff — tasting.

My first visit to Ireland three years ago left me wondering where all the craft beer was. “Isn’t this a beer country?” I wondered. Alas, I was left disappointed with bars overrun with nothing but name brands that I could just as easily get back in the States. This time, however, I was pleased to see that the craft beer boom was well underway in Ireland and Kinnegar more than held its own to some of my favorites back home. 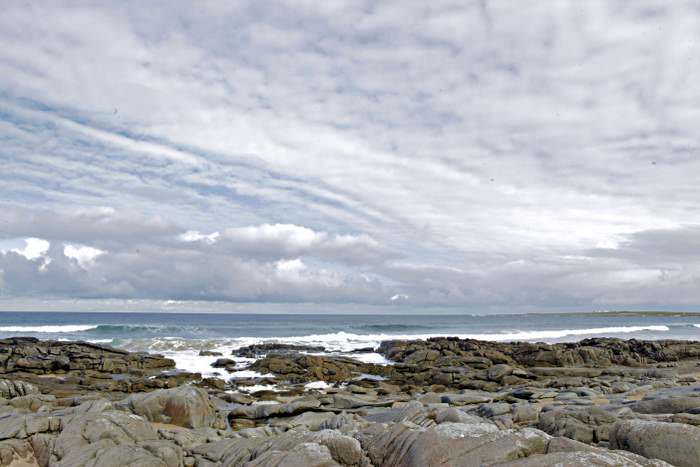 The shores of the Fanad Peninsula

It was then time to work off the morning buzz with a bit of walking along the Fanad Peninsula. Sean Mullan of Walk Talk Donegal served as our guide to navigate the breezy shores up to the Fanad Lighthouse. Mental Floss ranked this as the second most beautiful lighthouse in the world behind one in Germany. I’m not quite sure how one measures that or has the time to appropriately judge the lighthouses of the world, but I was in no place to argue after visiting Fanad myself. After climbing to the top, something most are not permitted to do while construction is ongoing to turn it into overnight lodging, I could have stared at the waves crashing into the rocky coast for hours. 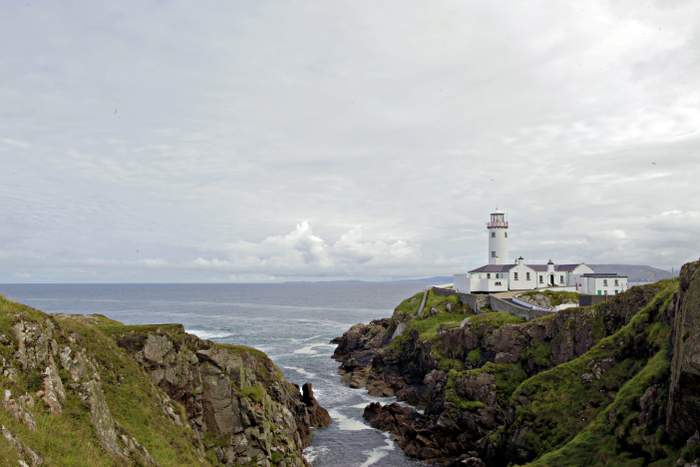 Of course, I had to keep moving, this time over to the equally scenic Glenveagh Castle and Gardens in Churchill, Donegal. Another luxurious creation of the 19th Century, I set off on a hasty march up a winding dirt trail to take in an overhead view of the castle on the banks of the tiny Lough Beagh. Just then, a rainbow formed across the water as if it weren’t easy enough to take beautiful photos in a country seemingly made to make amateur photographers seem professional. 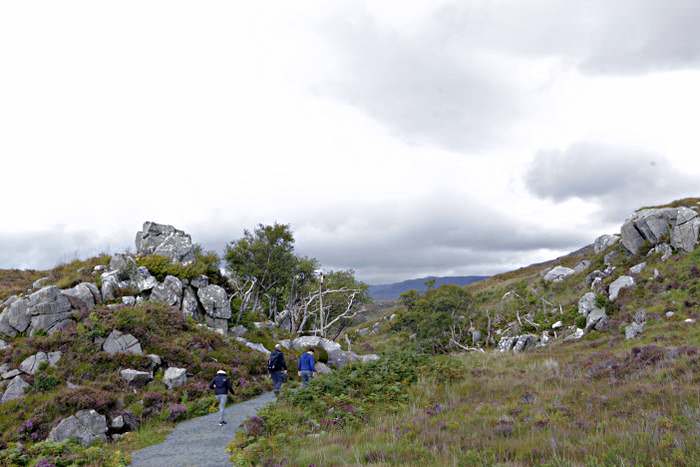 That night we headed into The Singing Pub and Ocras Café in Downings for dinner and music. This is the “Raw Ireland” every American traveler strives for. At the end of the evening, I was sitting on a bar stool an arm’s reach away from a group of local musicians performing a mixture of classics and originals. They were huddled around a small table big enough only to hold their pints of Guinness. Another musician joined shortly thereafter, one Sarah E. Cullen. Struck by her voice, a mixture of the old country music I love and soul, I approached her afterward to introduce myself. Flash forward and her original music appears in the video I created for County Donegal. 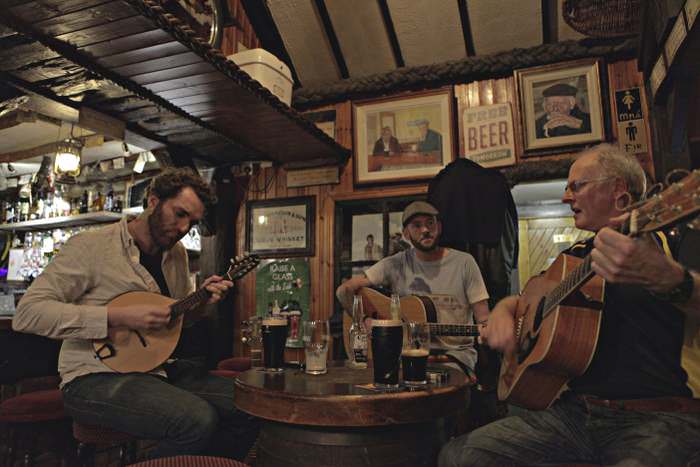 The Singing Pub and Ocras Café in Downings, Ireland

The whirlwind tour continued the next day with a ferry over to Arranmore Island. Here we organized a cycling tour of the island with Grass Routes. The electric bikes made the initial climbs all the more graceful, but the experience left me with the decision that I would someday return to cycle the whole of the Wild Atlantic Way on a proper road bike. Simply put, these perfectly smooth, winding roads were made for a bike.

Our cycling tour led to some of the more dramatic views one expects of coastal Ireland. Ultimately, I’m a city guy. The mere thought of living in the country tests my sanity. But this is Ireland, not the middle of the American plains states where even the strongest of minds could not be blamed for succumbing into madness by being surrounded on all corners by absolutely nothing for miles. Not even a slight incline in the land. But in Ireland, especially here in County Donegal, my mind was always at ease, envious of the small population who call the island home. 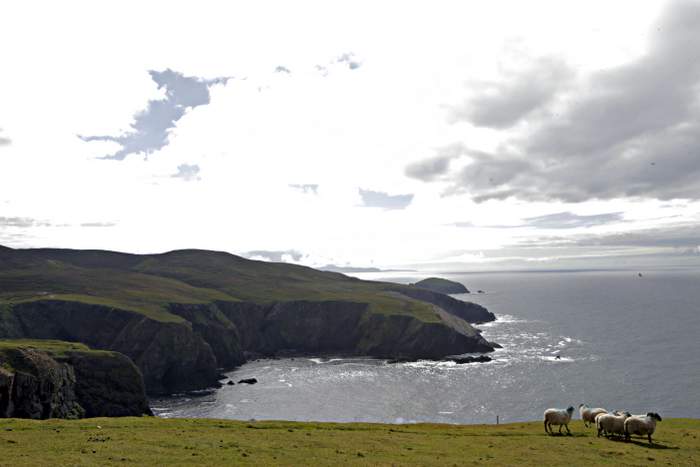 The cliffs of Arranmore Island

Alcohol then continued its role in moving the trip along with an Irish coffee demonstration by one Mr. Bartley Brennan of Leo’s Tavern in Crolly. Besides serving up the perfect combination of caffeine and booze, Leo’s is also famous in Donegal for its namesake — father of Enya and three members of the Clannad Band. As such, pictures of the famous Irish musicians and other celebrity guests adorn the walls of the pub. Mercifully, our next stop took us to the hotel.

“Oh, come on,” I thought to myself while standing outside the Lough Eske Castle Hotel and Spa. “I do not belong here.” Somehow I ended up at a five star hotel. Unbelievable to me that I was let into this relic of Irish history. Unlike the relatively younger castles around County Donegal, this piece of elegant rock traces its roots back to the late 1400s and the O’Donnell Clan who founded the town of Donegal. All things considered, the hotel itself is surprisingly affordable — well within the financial range of someone who would make it a point to get this far out into rural Ireland. 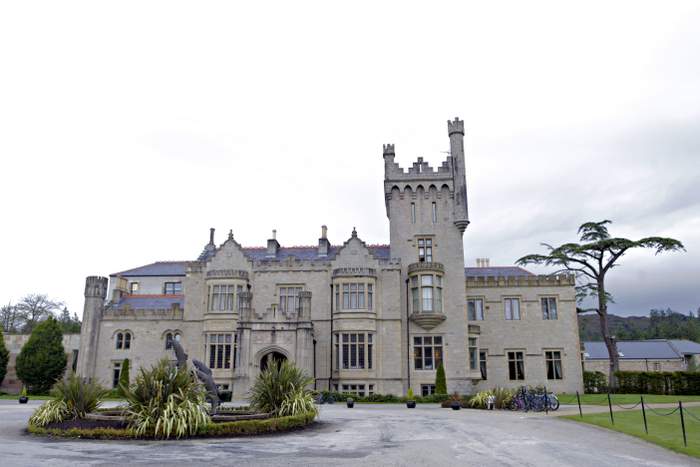 The next morning, it was time to leave County Donegal. The tour of the Wild Atlantic Way, however, continued with one final stop in neighboring County Sligo to meet with another renowned chef. I know, I know. Woe is me.

Eithna’s By The Sea Restaurant overlooks the Atlantic Ocean as if I hadn’t already been treated to enough scenery. Inside, chef Prannie Rhatigan awaited to give a demonstration of cooking with seaweed. That’s right, seaweed — the sloppy-looking green stuff older siblings use to torment their younger counterparts during beach getaways. Turns out it’s very edible and very delicious when prepared properly. Better yet, it’s extremely healthy. 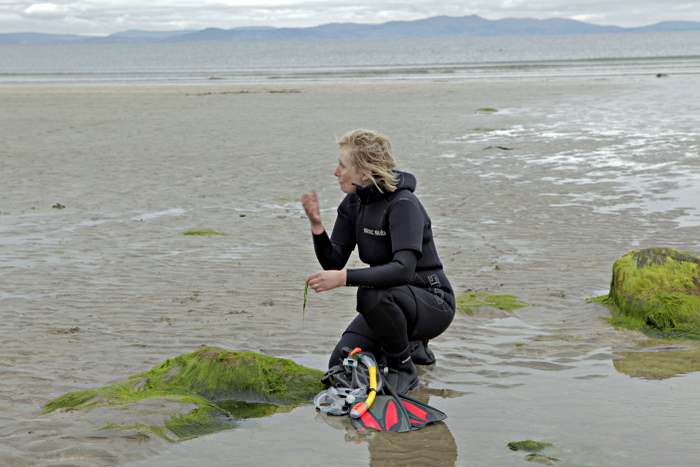 Chef Prannie Rhatigan, famous for her use of seawood, tastes some of the local variety

The Wild Atlantic Way tour finally came to an end with a walk led by Auriel Robinson of Sea Trails. As luck would have it, we had coincidentally arrived just in time for a ceremony commemorating a Spanish armada wreck that sunk up to 24 ships, claiming an estimated 5,000 lives. To honor each life, thousands of Christian crosses were raked into the wet sand. 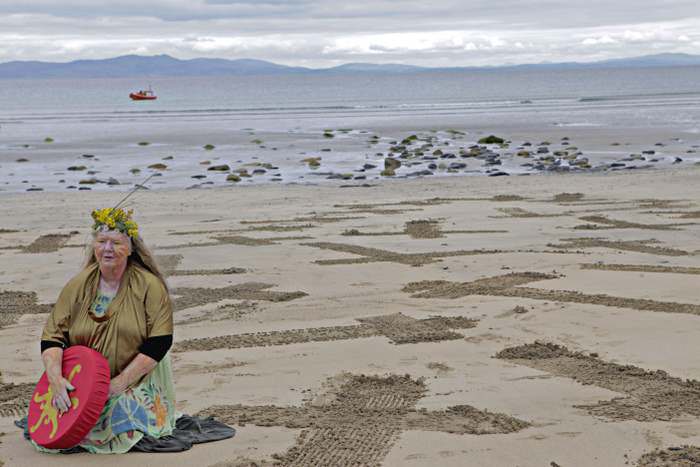 For someone coming from an infant of a country (seriously, we’re only 240 years old in the States), it felt a bit strange yet impressive to see a country honoring a tragedy from the late 16th Century — even stranger considering what led to the tragedy. The reason the Spanish ships were up there in the first place was because they were fleeing a failed attack against England. I guess it just shows that the Irish will always enjoy sticking it to the English in any way possible.

I suppose it should come as no surprise that at the heart of “Raw Ireland” is the famous charm of Irish humor.

Joe Baur is a travel author, writer and filmmaker based in Cleveland — at least when he can stay put for a few weeks. His work has appeared in BBC Travel, Craft Beer, Yahoo! Travel, Matador Network and he’s the creator of the Without A Path travel podcast. Follows his travels at joebaur.com and on Twitter @BaurJoe.

What a great article describing so many of the delights of Donegal!