In past travels I have climbed through lava tubes, run from blasts of sulfur fumes from active volcanos, have witnessed fiery lava drop with steamy sizzles into the sea….BUT when told by a fellow traveler I could descend 120 meters (400ft) “into” an actual volcano chamber, I guffaw, “Yah, right… what Sci Fi have you taken to be reality – Jules Verne’s?” But here I am, with my husband Rick and nine other intrepid adventurers following Thora, our guide, for the 3km (2mi) hike over rugged lava fields to reach the entry point for our journey towards the center of the earth. The tour company picks you up from your hotel in Reykjavik to begin your adventure. 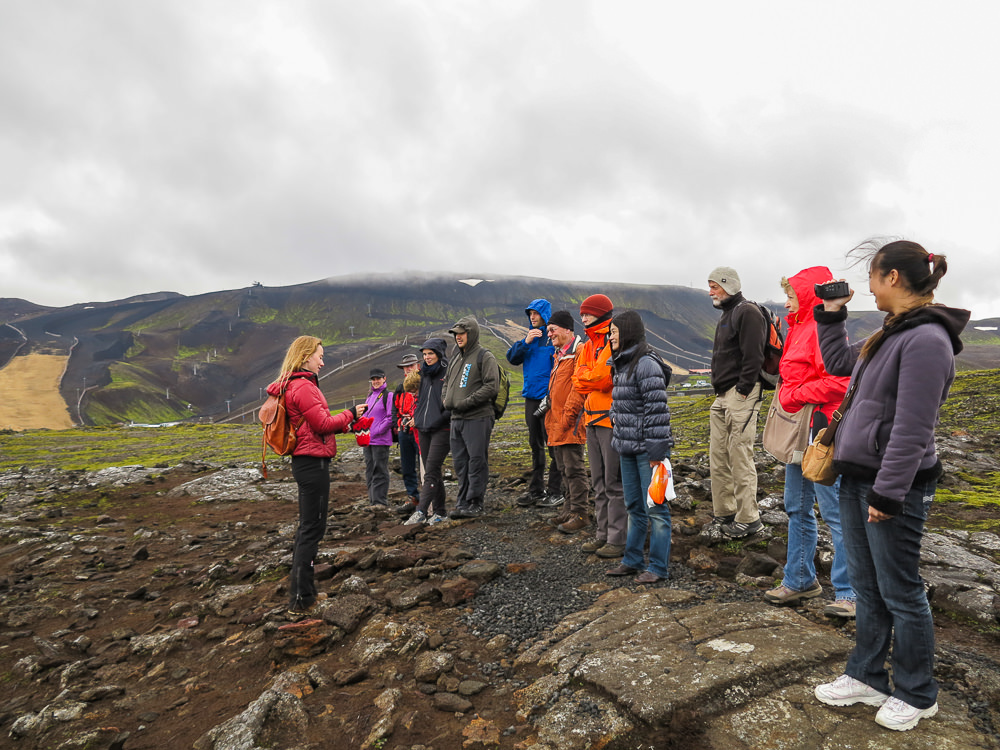 Guide Thora leads us to the volcano

At one point we traipse across a steel rung bridge. The crevice below is part of the Eurasian and North American rift which extends across Iceland from northeast to southwest – and which is widening by 1.5cm (.6in) each year. 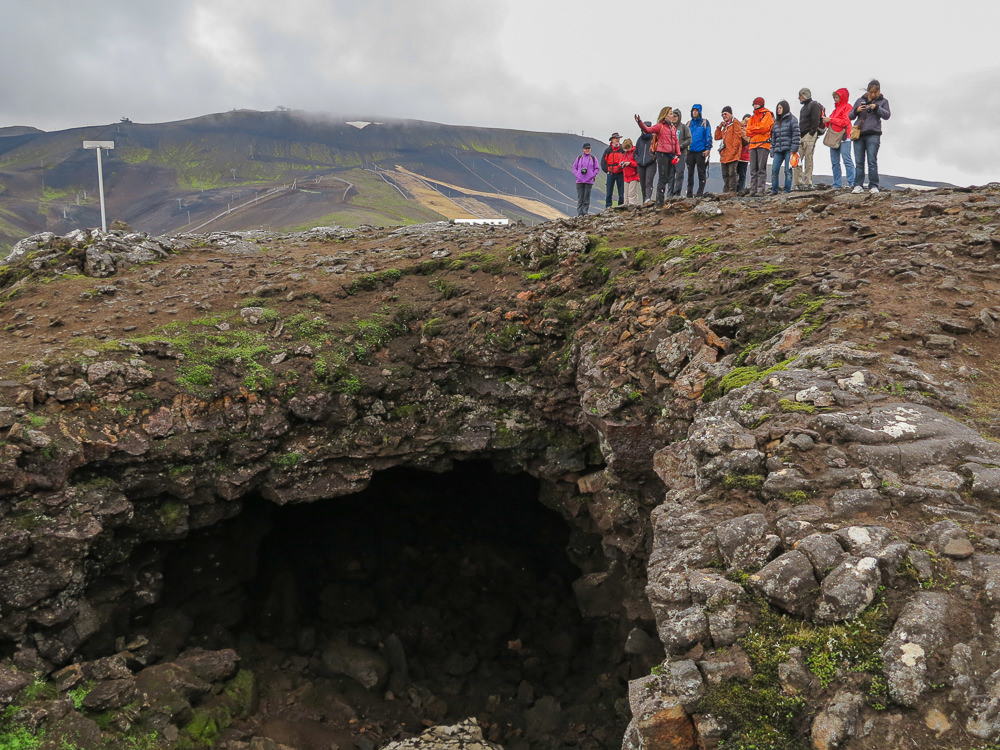 We reach a small cabin where an instructor fills us in on particulars of what to expect on the descent. Our group is divided into three; Rick and I are in group two. Our turn comes quickly and we don helmets and safety harnesses before a short uphill climb to the gaping maw of Thrihnukagigur, which translates to “Three Peaks Crater” (one of which we will drop into). Thrill, as I’ve dubbed this tongue-twister, last erupted 4,000 years ago. 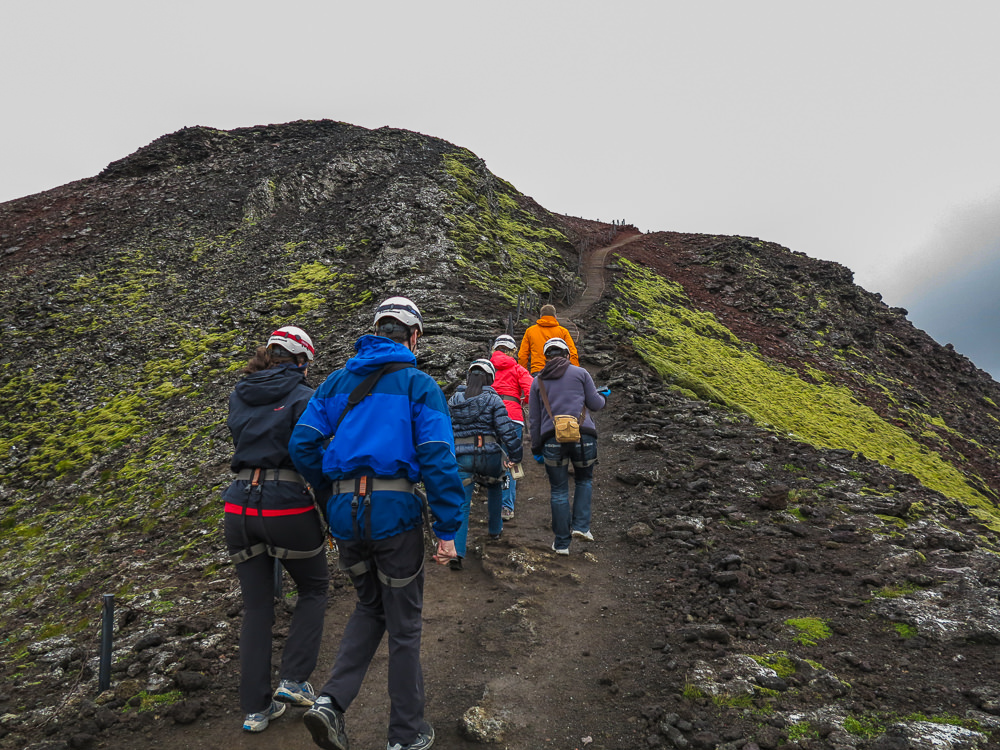 Last few steps to mouth of the crater

A metal cage awaits us; one like window washers of sky-scrapers use. Pall, the operator, makes sure we are properly hooked to the cage frame with carabiners before pressing a button, wherein after a few jolts and scrapes against the rock face, it rumbles slowly into the enormous hollow. 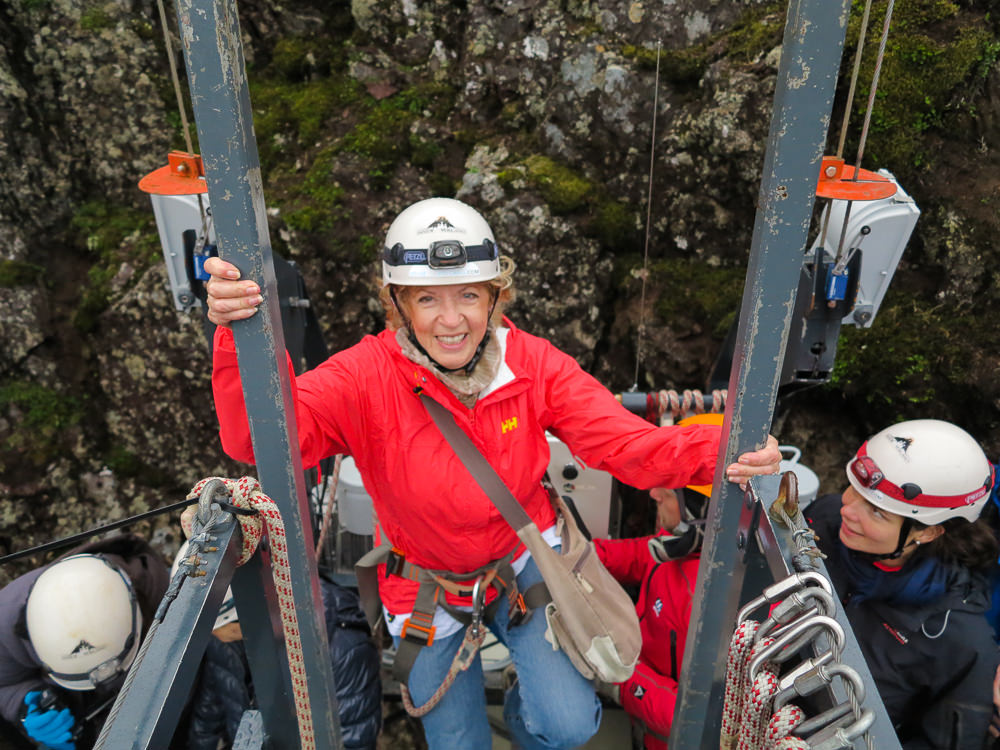 The chill running up and down my spine is from more than the damp 4ºC (39ºF) on the jagged rocky bottom, where untethered (and after being warned where “not” to venture) we are allowed to wander freely. The gargantuan proportions of this strange subterranean world bombards my senses – which Thora puts into perspective, “the ground space is large enough for three basketball courts and can easily fit the Statue of Liberty.”

I think of the yin and yang of nature – how sulfuric gases, intense pressure and extreme temperatures of unimaginable geological violence resulted in such startling beauty. The chamber walls are as vividly colored as a geologist’s prized collection – russets, yellows, blues, greens, reds – which Pall on the descent explained “are from the different ore concentrations in the rock, such as iron in the reds, copper in the greens.” A few massive patches of kettle black are where the coating left behind from the magma blasts has fallen away. Water seeping through the rock drips from above like rain tapping on my helmet, and glistens where it trails down the walls. 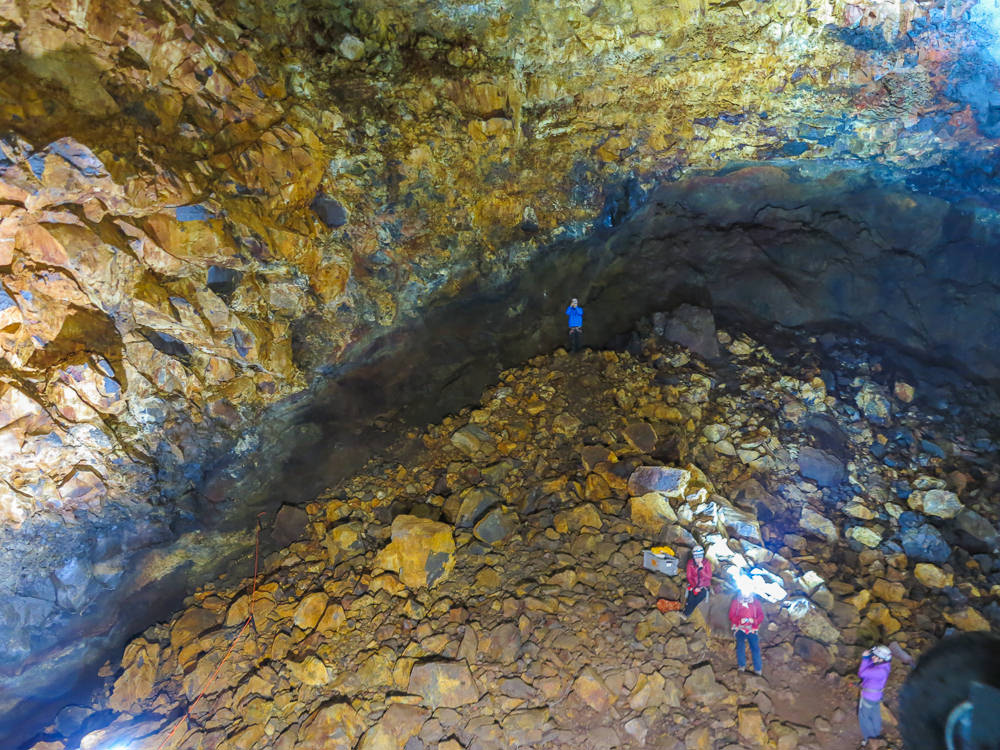 Transfixed and humbled by this grandeur, I barely move until I hear Rick’s voice echo, “Come over to this edge, you have to see this to believe it!” I gingerly climb over sharp boulders to reach him and look downward into this side’s additional 30m (100ft) abyss with more swirling designs of nature’s artistry. 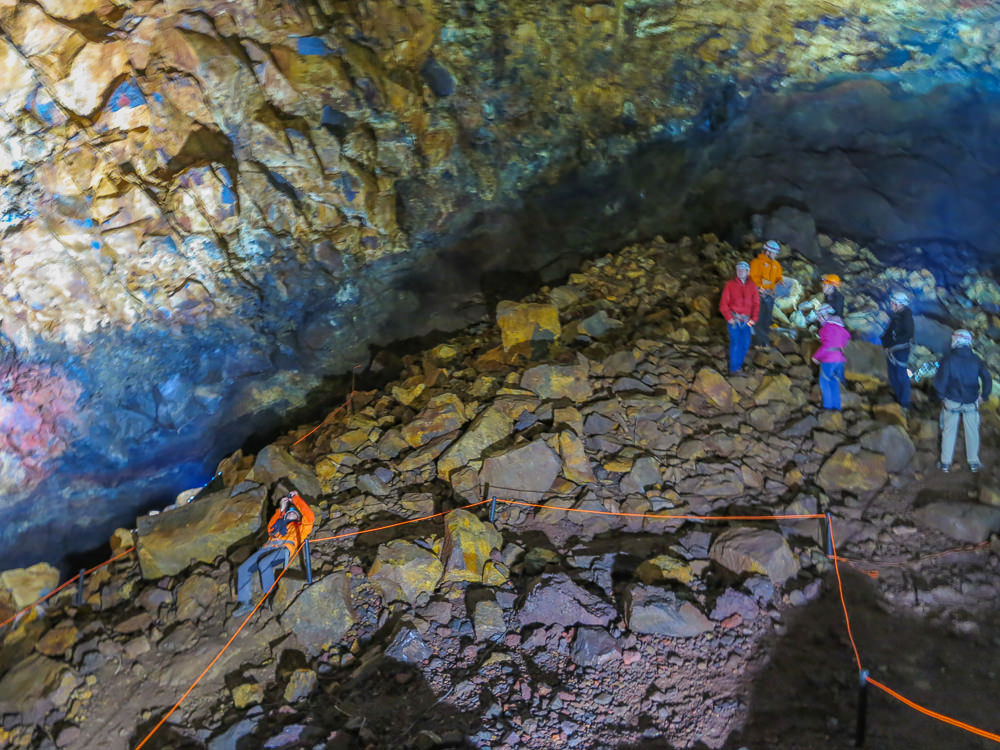 Stay out of red rope area

This magma chamber was first discovered by long-time cave enthusiast Árni B. Stefánsson in 1974, but descending without headlamp he did not realize its magnitude. Years later, this time with lighting, he was astounded by what he saw. Stefánsson began petitioning the powers that be to open this wonder to the public. 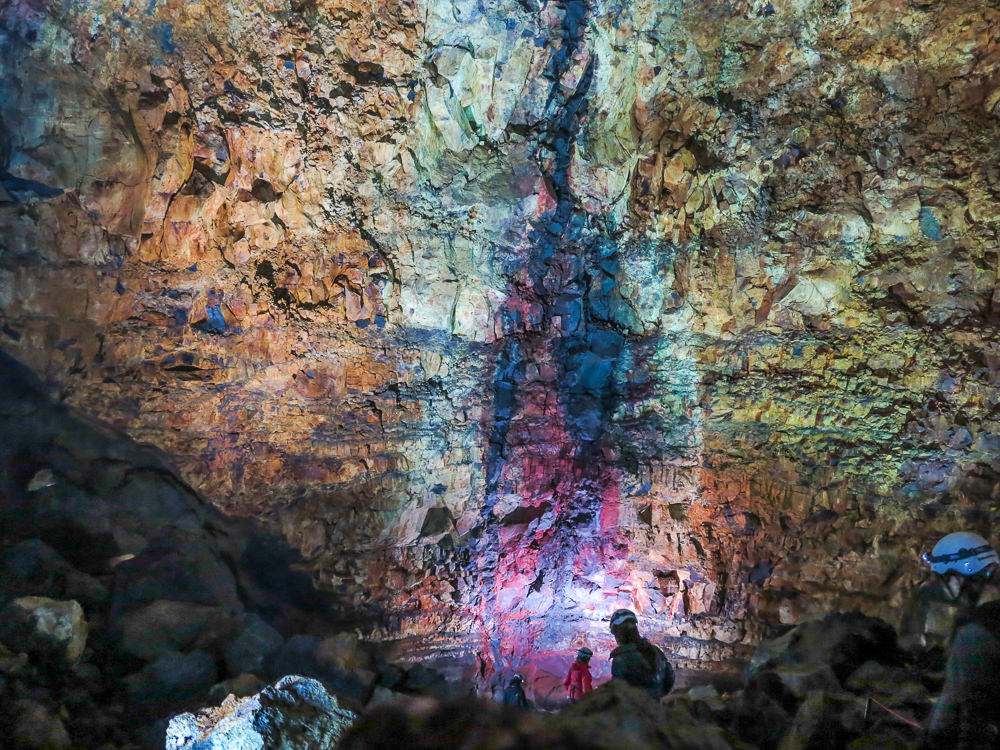 National Geographic got wind of this; hence an entrepreneur installed the lift and lighting for the magazine’s crew to film a documentary – this was 2010. The first tour took place in 2012 – the first time in history that the general public was privy to this magnificent anomaly of Mother Nature. Normally after a major eruption the magma left in the chamber hardens closing the opening, but in the case of Thrihnukagigur, the post-eruption magma drained out from the bottom, which volcanologist Haraldur Sigurdsson described, “It’s like somebody came and pulled the plug, and all the magma ran down out of it.” 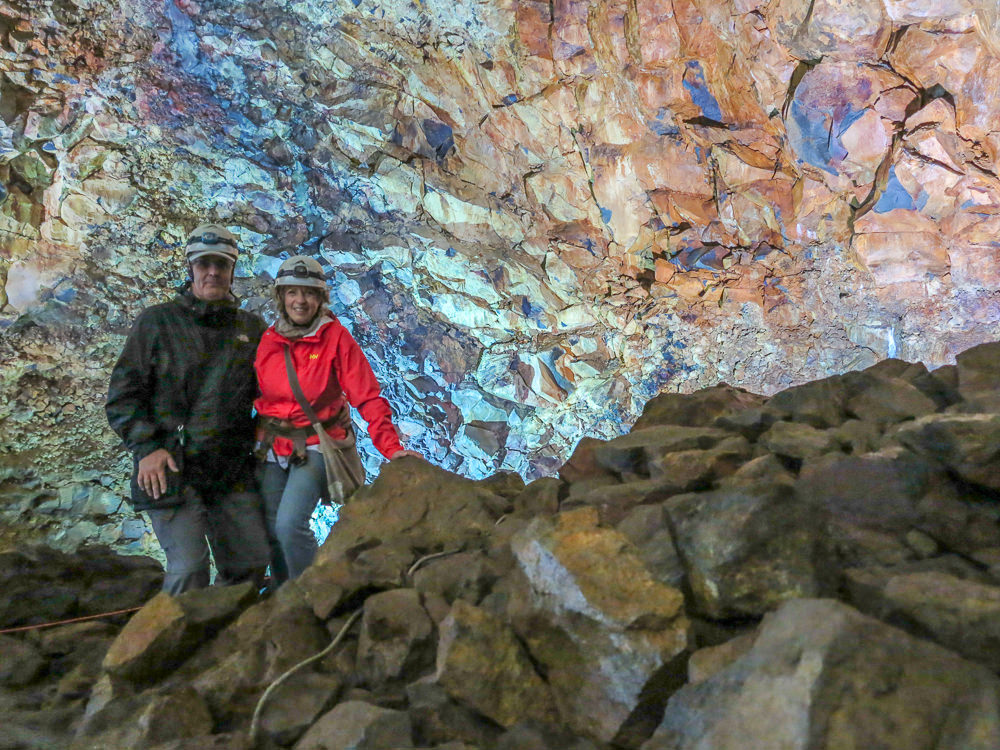 Back in the cabin we are treated to a steaming bowl of traditional “meat soup” and coffee to fuel our walk back to our waiting bus. The realization that we have seen something in Iceland that cannot be seen anywhere else in the world adds another element to our unforgettable and mind-blowing experience; a good reason alone to visit this land of geological wonders.

3H Tours, an Icelandic company is the tour operator to the Volcano. Tour duration is 6 hours. Pick up at your hotel can be arranged, then transfer to a bus for the 30-minute drive to where the road ends at the foot of Bláfjöll Mountain Range, for the almost 2 mile hike. If not up to the hike, the site can be assessed by helicopter.

It was Peter! I have nothing to compare it to...and maybe never will. Your "List of Wonders" site is great! Can't wait to read more.

Yes, Lily...who knew! Thanks for commenting on my story. I checked out your site- and its great!

Who would believe that's what volcanoes hide when they're not full of lava? I agree, what an experience, Irene :)

Hi Bryan, Thanks very much! We were so surprised to see such color...and it was an experience of a lifetime. You have a great website - looking forward to checking it out. Cheers!