Chances are that your visit to Barcelona, the Catalan capital, will be a warm and inspiring one. Sea-breezes, sunshine and outdoor socializing are all hallmarks of a maritime city pulsing with fashion, design, nightlife and thousands of satisfied visitors each and every year.  Escaping the crowds isn’t an option here, and you really wouldn’t want to, because crowds are the essence of Barcelona, especially on its famous boulevard, La Rambla. 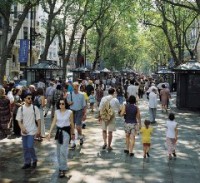 Dissecting the city from Plaça de Catalunya to Plaça del Portal de la Peu by the harbour, first time visitors have no chance of avoiding La Rambla. Yes, there are card gamers waiting to strip overly-intrigued tourists of their cash. And the pickpocket warnings you’re likely to be handed at the hotel check-in desk should be heeded – as they should in packed city streets the world over. But, once you are acclimated to La Rambla’s unrelenting tide of striding promenaders, fight the urge to rush off for quieter ground, simply ticking La Rambla off your list of must-sees. Stroll the boulevard slowly from top to bottom and note the combination of five differently named ‘Ramblas’, taking in the waves of visual entertainment to your left and right. 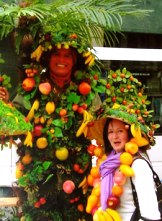 Abundant flower stands command a section of La Rambla for themselves, followed by bird and animal stalls that some might choose to walk past more rapidly . Next is the main attraction: Europe’s finest street performance ensemble. From the famous living statues to the amazing Keepie-Uppie Man, from a Robodancer to the magnificently surreal walking, talking fruit creature, you will be amply entertained. But, if you want to take souvenir photos of the scene, come prepared with a pocket full of Euros. Because, if you photograph the performers without tipping them, you could be haunted forever by the memory of a scowling performer in a flea-bitten foam sumo-wrestler’s suit chasing you off La Rambla.

Wandering the two-kilometer stretch of La Rambla, and/or running from possessed street performers can be hungry work. It’s recommended, however, that you give the restaurants on the main drag a wide berth, saving your money and time for more authentic, quality eateries. For example, I was tempted into Origen99’9%, at midnight, by its informal style, and because it was packed with animated groups of patrons. Its adjoining deli turned waiting for my table into a lesson in Catalonian gastronomy. Tapas dishes are a fantastic value here and are of good quality. For desert, try the indulgent Chocolate Pot. Note: another of the three Origen99’9% restaurants in Barcelona can be found on Avinguda Gaudí (on metro Lines 5 and 2, at Gaudi’s iconic cathedral).

If wandering La Rambla, and your stomach just can’t wait for late evening tapas, why not refuel at Mercat de la Boqueria , choosing from stalls stacked high with fresh produce. It is set at number 85 on La Rambla (if you’re heading towards the harbour, it’s on your right.) The added bonus here is washing down lunch with bubbly Cava served by the glass. Enjoy it as the locals do: leisurely, on high stools surrounded by the comings and goings of the market throngs.

As you arrive at Plaça del Portal de la Peu, the harbour end of La Rambla, you have various options. You might turn left, heading along Passeig de Colom towards the hip El Born/La Ribeira district area, or you can proceed straight ahead, across the water on the wide, modern urban jetties of the Rambla del Mar. And there’s always up. Take the elevator up to the viewing platform inside the 60m/197ft high Christopher Columbus Monument (open 10am – 6:30pm, June to September). The panoramic view puts traffic arteries and landmarks into perspective and it’s great for tracing your route back along La Rambla and taking in the spectacular vistas across the harbour.

Written by Kelly Pipes for EuropeUpClose.com