Most of my visit to Leuven was in the evening, so it was a mood-oriented experience. On a long walk through the blue Leuven dusk, the architecture stood out against the sky in an almost fantastical way. The incredible Gothic Town Hall in the Great Market Square cut an intricate silhouette against the sky, and the famous Fonske sculpture of a student pouring wisdom into his head seemed like an otherworldly imp. 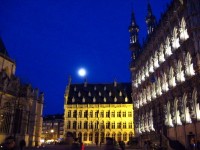 One of the most exciting buildings to stumble across in the low light was the university library with its big ringing bell tower. That university-town feeling was distinctly in the air in the center of town—every other turn seemed to take me through a courtyard of a dormitory or past an institute. The offices of various departments in the Catholic University of Leuven are spread all over the city in different beautiful buildings, so touring the city was a bit like touring the University too—they are so geographically interwoven that they seem to have the same life. I also got the feeling that the University feeds the economic vibrancy of the town and its tourist value. I spotted plenty of restaurants scattered around and through the campus that seemed to cater somewhat to students, but would be easy, available options for a visitors’ meal as well. 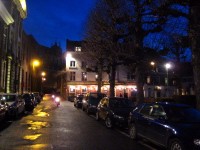 My Belgian guide seemed most interested in telling me about the University’s culture split in the 60s and 70s. Like Belgium as a whole, Leuven (and the University) used to have a split language population, part Flemish and part French-speaking. As the overall political structure of Belgium evolved, though, tensions increased in Leuven, and in the mid 60s, Dutch-speaking students began demonstrating for an all Dutch-speaking curriculum. Before the end of the decade, the University had been split into two—a Dutch-speaking faction (still in Leuven), and a French-speaking university, which moved to another campus closer to Brussels. 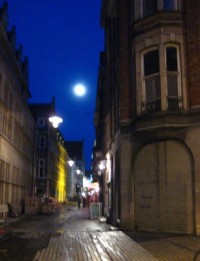 Contrasting the academic atmosphere of the central part of town, when I wandered in the other direction from the train station the next morning, I could feel the industrial roots of the town. Far fewer people, beautiful old warehouses (many abandoned), and the occasional surprise of the Dijle River where it wound through the town gave the morning walk a far different feel than the evening walk before. I passed the Stella Artois Brewery, already chugging away—Leuven is the original home of that widely exported Belgian beer. The industrial feeling of certain parts of the town are in line with its history. Leuven has, at various times over its long life, been a main producer of cloth, a center of trade, and of course home to breweries.

Leuven is small but distinctive, and exciting to visit. Emblematic of the diversity, intellectualism and productivity of Belgium, this town comes highly recommended, especially for leisurely, curious walks like the ones I was able to enjoy.