For over 60 years Robert Doisneau was committed to capturing “les petits moments de bonheur de la vie quotidienne” (small moments of happiness in daily life).  His subjects were both parisiens (people who live in Paris) and les banlieusards (those who live in the Parisian suburbs). Though his photos are quite different from one another, they come together to form a unified body of work expressing truth, reality, happiness, and chance.

Doisneau has been dead for over thirteen years, yet his photos live on.  His collection of over 450,000 negatives is managed by Doisneau’s daughters, Annette Doisneau and Francine Deroudille.  The negatives are housed at Atelier Doisneau (Doisneau’s studio) in Montrouge, Paris. 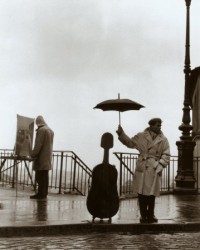 “I like people for their fragility and their faults.  I get along well with simple people.  We can talk.  We start by talking about the weather and then, little by little, we get to more important things.  When I photograph them, it’s not like I’m a cold, scientific observer examining them under a magnifying glass.  It’s very friendly.”

“I’ve never really examined why I take pictures.  In reality, it’s a hopeless battle against the idea that we will all disappear someday.”

“I try to transmit to others what I believe to be good and beautiful.” 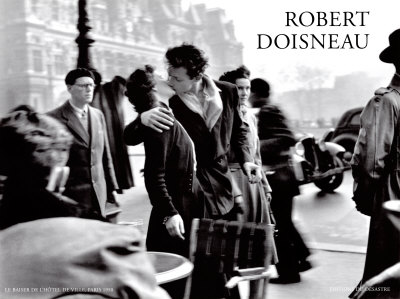 One of Doisneau’s most popular and controversial photos is “Le Baiser de l’Hôtel de Ville.”  When the photo was first published in Life magazine in 1950, Doisneau made it clear that the photo was posed, but that the subjects were real lovers he had met on the street.  In the 60s, Doisneau was faced with accusations that the lovers were actually actors.  At this time, Françoise Bornet, the female subject of the Hôtel de Ville photo, came forward and told the press that she was not an actress and, indeed, this was a photo of her and her real- life lover at the time, Jacques Carteaud.

In 1992, a poster company picked up the image and it became a global sensation and an iconic representation of Paris.  Shortly thereafter, a couple came forward and claimed to be the subjects of the photo on national television.  Doisneau and Bornet quickly set the record straight.  As proof of her identity, Bornet produced the print of the photo that Doisneau had given her as a thank you gift before its appearance in Life.

In 2005, Françoise Bornet decided to auction her original Doisneau photo (signed and stamped by the photographer) at the Parisian Dassault auction house. It was estimated to sell for around $25,000; however the final sale price was $250,000.  Bornet decided to sell the print to help finance a documentary production company.  For Bornet, the sale marked a new beginning.  She commented that she found it moving that a photograph that had been taken so long ago of a dead relationship, taken by a deceased photographer, could bring about new artistic life.

Of course, Doisneau’s images also live on through retrospectives and shows, as well as in the memories of photography affectionados around the world, and in the collective consciousness of those who dream of the Paris of a bygone era.

John Lichfield, “More than just a kiss:  Paris honours realist side of Doisneau,” The Independent, Oct. 20, 2006.

I have this picture of the kiss it is approximately 24x36. This picture is the only one I have seen with the writings like the poster I have. does anyone know how much it is worth?