How to encapsulate the best of Tuscany in one experience? Combine lolling-hilled landscapes punctuated by cypress trees, limestone farmhouses with red shingles and tiled floors, simple food requiring fine, fresh ingredients and a savvy hand in the kitchen, wine known the world over, and — most importantly – an ebullient hospitality. Lila is the official falcon of Il Falconiere (“the falconer”), a luxury resort in San Martino Bocena, about 2.5 miles outside of Cortona, in the heart of Tuscany. She embodies the qualities that Riccardo and Silvia Baracchi, the property’s owners and ideators, want to transmit to their guests: countryside, nature, and soaring beauty. 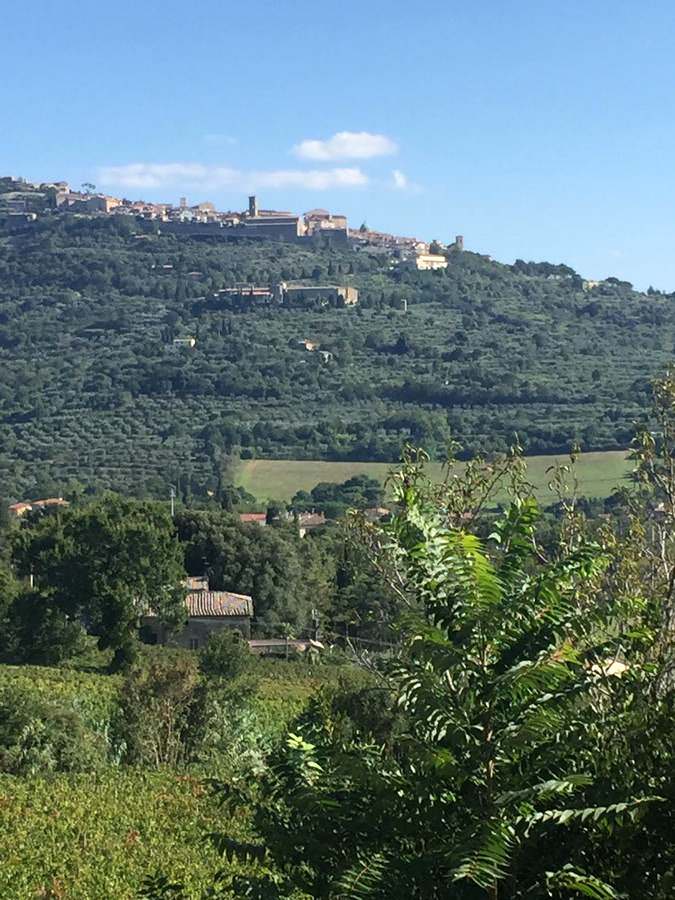 A more effusive greeter is Giaco, one of the couple’s seven dogs. While Lila is attached to her perch during the day (where she vocally expresses her opinions), Giaco wiggles and wags his delight to all arrivals. However, if you are allergic to dogs, he will remain at home.

The 10-hectare estate was founded in 1670 and has been in Riccardo’s family since the 18th century.   If you arrive by car, you’ll see that the access road to Il Falconiere was made before the advent of automobiles. Two cars cannot pass each other without one’s having to back up. So some guests fly in, using the property’s heliport. Earthbound guests can rely on local drivers who don’t see this as an issue. Neither will you, after the first day. 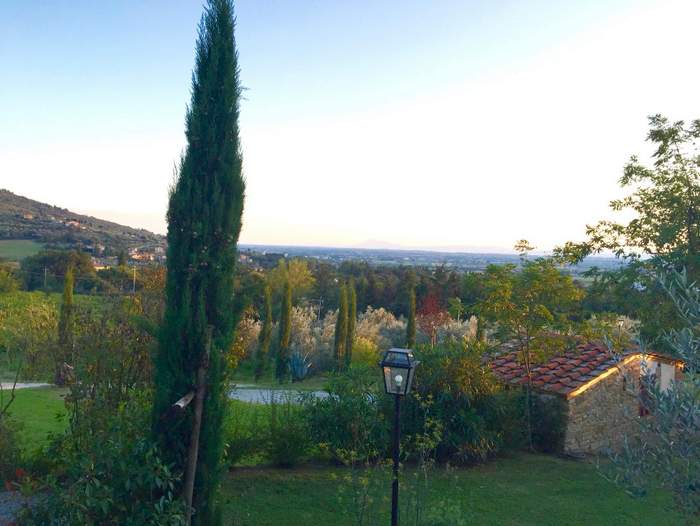 Tuscan colors are almost surreal in their intensity

That is, if you decide to leave the resort at all. The beautiful thing about Il Falconiere, is that you can fill your day with dolce far niente and sleep like a baby each night. There is as little or as much to do as you want without leaving the premises. You can swim in the pool, hike around the grounds, indulge in the spa, take a cooking lesson from a Michelin-starred chef (Silvia), browse the resort ‘s collection of books about Tuscany, tour the vineyards, eat yourself silly, and engage in blissful conversation beneath a tree-lined patio or on a stone terrace overlooking vistas little changed since the time of Dante.

The resort has a total of 22 rooms, but even the smallest would be a suite in most hotels; they range from 290 to almost 1,200 square feet. Many are carved out of old buildings; number 11, the largest and most unconventional, incorporates authentic Etruscan elements.

At the far end of the property is a cluster of seven lodgings, Villa Borgo del Falco. It has its own pool, and a large kitchen where cooking classes are held. Some groups rent this entire complex, and request a private chef to cook for them. It is the resort’s most secluded enclave, but can get a little noisy during the vendemmia (grape harvest) since it is surrounded by vineyards. 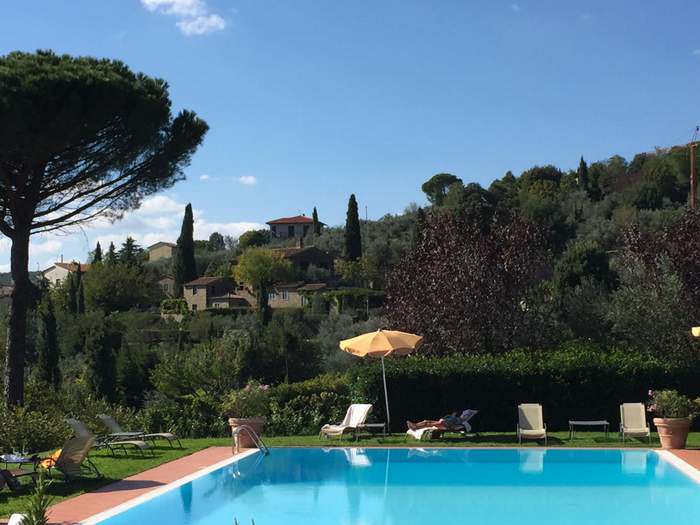 View from the pool to Borgo del Falco, a private enclave within the resort

Our suite, number 13. was set in a new structure built to look like a farmhouse, with terracotta floors and timbered beams. We entered into a sitting room with sofa, armoire, desk, and chairs. To our right was the bedroom proper with a large multi-channeled TV and a bed with a superb mattress and top-quality linens. To our left was a tiled bathroom with a split shower-bath and a Jacuzzi, bath accessories based on local olive oil, luxury towels, and lots of space for our paraphernalia. Everything from rugs to lighting was done tastefully, as opposed to in-your-face trendiness. Wooden shutters on the windows and deliberately heavy old-fashioned door keys because – as the Baracchi explain – a modern key card system would not be in keeping with the feel of this place. 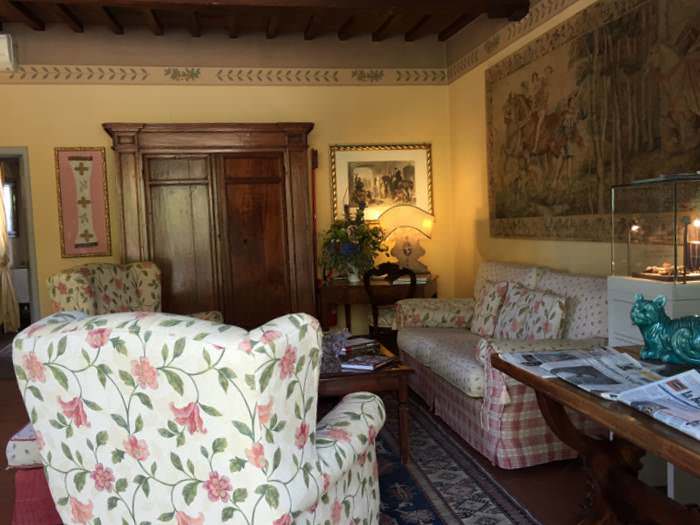 The location between the spa and the swimming pool, on the other side of some hedging, ensured sun and access during the day and tranquility at night. We were a few lawn-and-cobblestone steps from the dining room, a former limonia (the former conservatory for the estate’s lemon trees during the winter). Its ground floor houses the breakfast room and a separate reading room. The formal dining room is downstairs. During pleasant weather, meals are served outside as well. Pebble paths and stone steps lead you from one area to another; note that this is not a spike-heel-friendly environment. The ambience is elegant but not off-putting or pretentious, much as the couple who animate it. 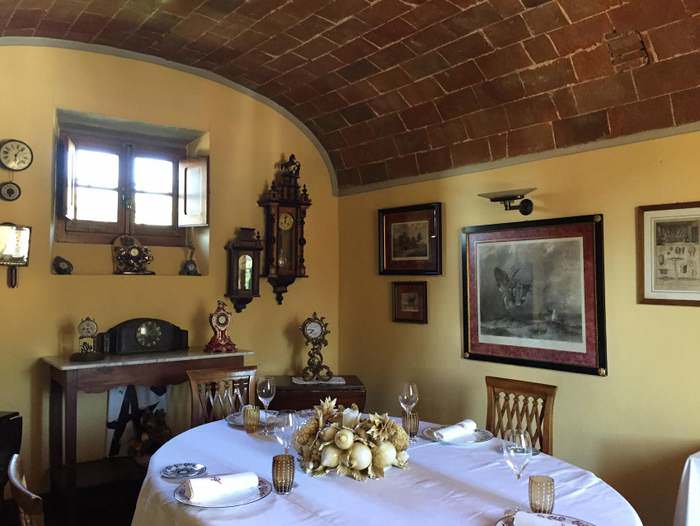 The breakfast area is so cozy, you want to linger after your morning Cappuccino

Riccardo and Silvia Baracchi were born nearby, she to a family in the hospitality industry. He was a business executive whose family had been winemakers for generations. When the property that is now Il Falconiere became theirs in the 1980s, they decided to create a retreat that they themselves would be comfortable visiting. They chose the name because it evoked nature and the hunting traditions of Tuscany. “We chose the name first and then became falcon experts,” admits Silvia, and both have scars from their encounters with the falcons. Falcons, it turns out, are smallish birds but fearless, to be treated with utter respect.

In addition to learning about falcons, the Baracchi had to wait six years for permits before they could begin renovation. They opened the restaurant first, in 1989. Their first rooms were ready in 1992, and they added the pool in 1995. They joined Relais et Chateaux in 2000, and a Michelin star arrived two years later, and has remained. 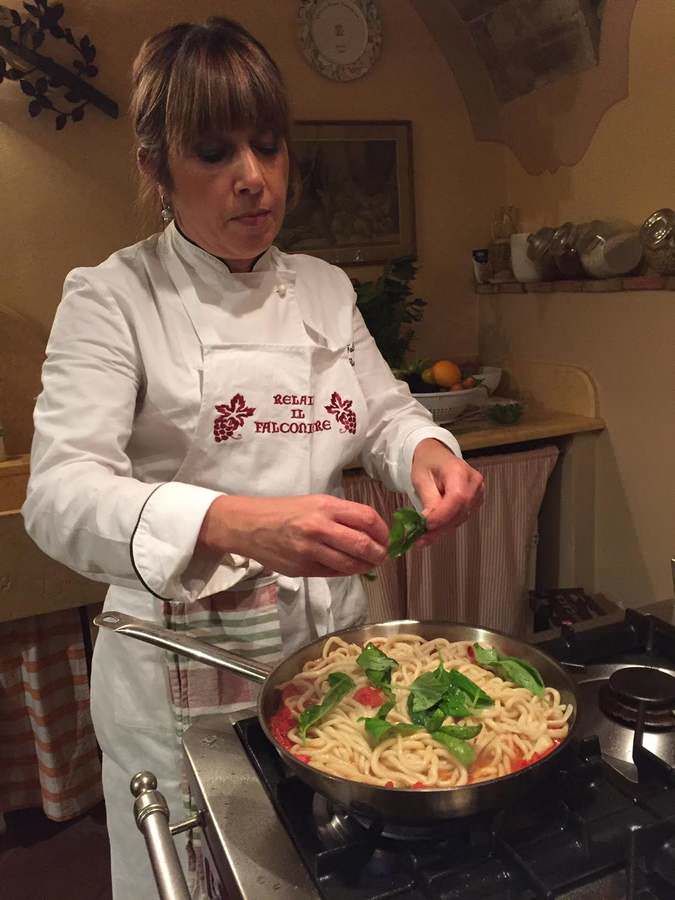 The Thesan spa (the word means regeneration in Etruscan) opened in 2009. It has its own purpose-built structure, and features products by Santa Maria Novelli, a Florentine company that dates back to the14th century. Many treatments are based on local products such as grapes and olives. 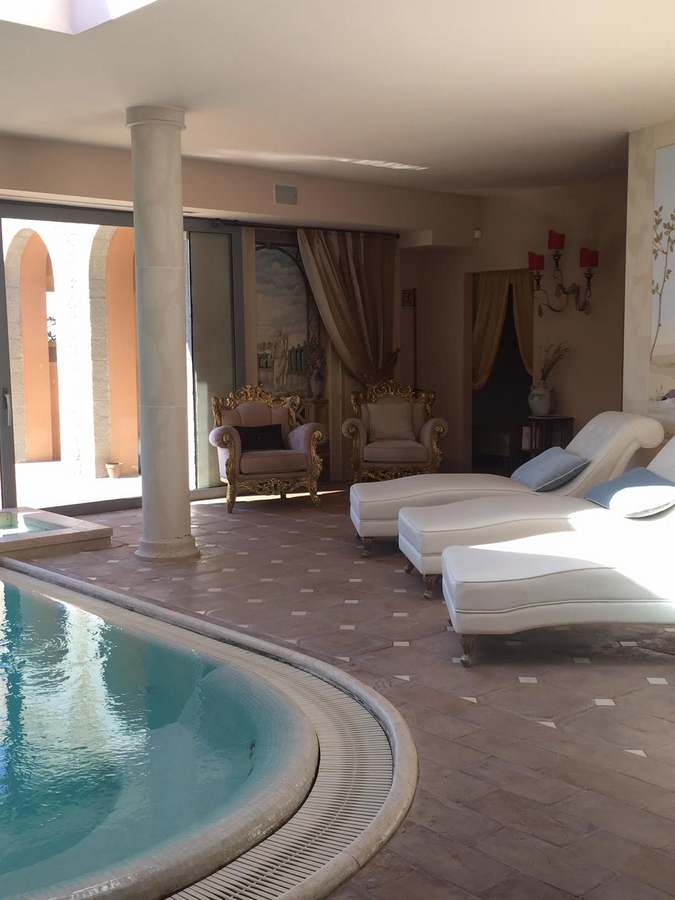 A quiet spot for meditation after treatment at the Thesan Spa

An article about Il Falconiere in a US travel magazine launched the resort on the US market and today the majority of guests are American. “I love the Americans,” enthuses Riccardo. “Their transparency, their directness, the way they think.” Other regulars come from Belgium, the Netherlands, and Norway. During our stay there were French, British, Canadians, Italians, and a group from Texas. A few years ago the whole resort was rented out for the wedding of two stars from Bollywood. The staff is too discreet to mention celebrity names, but we learned that Natalie Portman has been here recently, as have George and Amal Clooney. 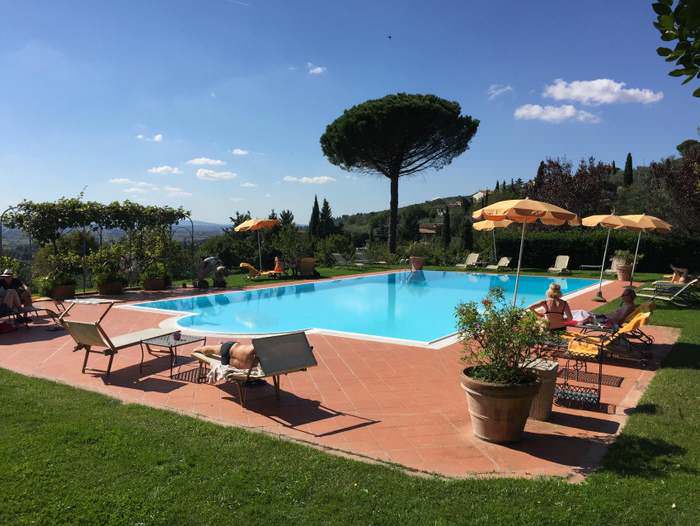 The view to and beyond the pool at Il Falconiere

Elegant guests, but no more so than the Baracchi themselves. They are the quintessential hosts with their warmth, charm, and understated sophistication. Every night in the intimate restaurant, they greet their guests by name and with a personal exchange. THIS is what makes Il Falconiere so special. You are not customers at their hotel but visitors to their country home . . . in Tuscany and nowhere else.

Written by and photos by Claudia Flisi for EuropeUpClose.com Transparency disclaimer: I was an invited guest at Il Falconiere for four days in September 2016.