As you arrive at the ruins of Urquhart Castle in the rural highlands of Scotland, the picturesque scene of deep dark blue waters and lush green mountains could be set anywhere in this scenic part of the country. The world’s most famous lake – Loch Ness – doesn’t look all that different from other lakes in the region. However, it holds a number of secrets that have baffled the public and scientists for decades. 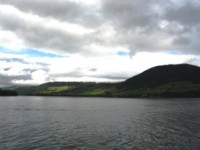 All lakes in Scotland are called “lochs”, a leftover from Scottish Gaelic. Loch Ness is an interesting loch itself, legends aside. It is extremely deep, reaching 230 meters (754 feet) at one point, making it the largest lake by volume in Scotland. It is so large, in fact, that it has more fresh water than all of the lakes in England and Wales combined! Its depth stems from its unique location; it sits on a geological fault line running diagonally across the length of Scotland.

The Loch Ness Monster, affectionately known as “Nessie”, dates back even earlier to the time of the Vikings; indeed, Saint Columba offers the first written account of a Nessie sighting back in 565A.D. However, the legend came to the world forefront in 1934 with the release of the ‘Surgeon’s Photo.’ This picture showed what appeared to be the head and neck of a large monster, and it caused sensational headlines and controversy for years. The photo has since been determined to be a hoax.

There have been a number of videos since the original photo which aimed to prove that Nessie is still there in that lake somewhere. The most recent is the Holmes video , filmed in 2007; it is currently being disputed by scientific investigations.

As mentioned, Urquhart Castle has the most stunning vantage point over the lake and is where most tourists today will start their Loch Ness adventure. These romantic ruins were at the center of Scottish trading routes in medieval times. Despite trading between English and Scottish hands over the years, the castle survived and sometimes prospered until 1689, when it was blown up by the Protestants who were under siege by the Jacobites.

A day at Loch Ness is not complete without a boat tour. Be sure to keep your camera / video camera handy!

Both Scotline Tours and Haggis Adventures offer tours of Loch Ness departing from Edinburgh. Otherwise, it is recommended that you rent a car to explore the area at your leisure.