You don’t have to be a lover of horses or history to visit Lipica, Slovenia. . . but it helps. This tiny village situated a few miles east of Trieste, Italy, encompasses a concentration of international culture and equine athleticism equaled by no other location on earth. Hippophiles will be in heaven, surrounded by 355 pureblooded Lipizzaners – snowy stallions, milky mares, and incongruously dark-coated foals – whose breed name comes from this very spot. 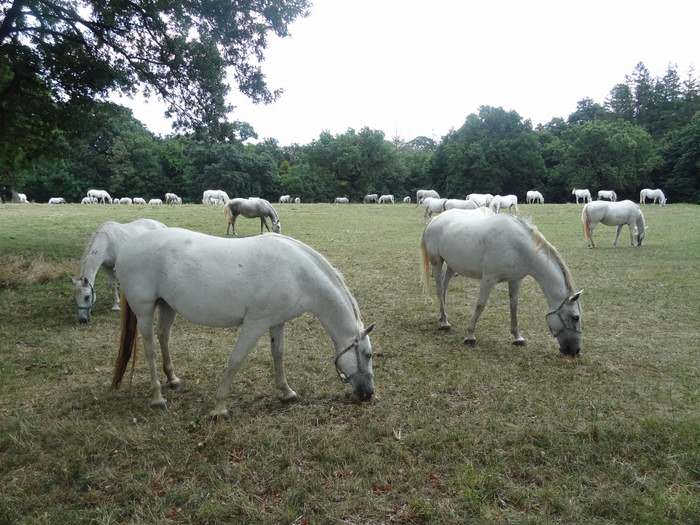 History buffs will marvel at the concentration of European and Mediterranean history in evidence. Nowhere else can you find such a focalized link among countries and continents: 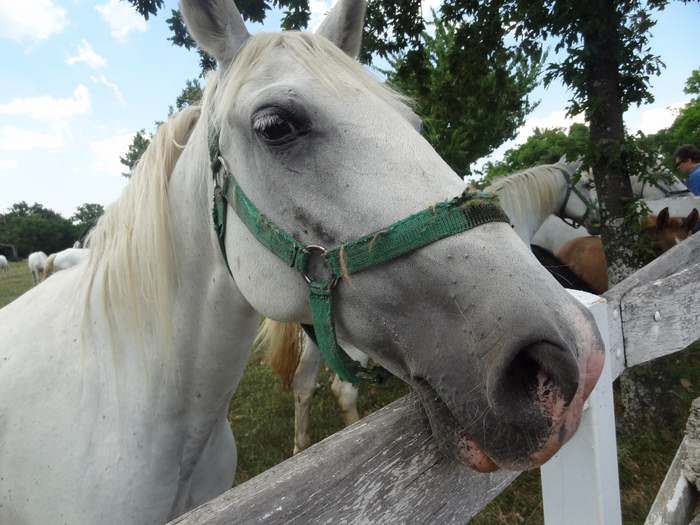 US history is also entwined with the Lipizzaner story. Exactly 70 years ago, in 1945, George Patton helped save the breed from destruction at the hands of the advancing Soviet army with — some say — the complicit cooperation of the Germans. That episode was recounted by Hollywood in the 1963 Disney movie, “The Miracle of the White Stallions.”

You don’t need to be an historian to enjoy Lipica, however. The stables and grounds sprawl over 311 well-tended hectares that have hosted up to 100,000 visitors annually, though today the number is more like 70,000. You can tour the grounds with a well-informed guide, take a carriage ride, visit the Lipikum horse museum, and – in season — see a show and watch a training session. The latter two are highlights of any visit to Lipica, because the unique movements of these horses, known as “airs above the ground”, are classics of high-level dressage and athleticism. Among the most famous of these are the levade, in which the horse rears up at a 30-degree angle; the courbette, in which the horse rears up and then “hops”, a movement calling for great hindquarter strength; and the beautiful ballet-like capriole, in which the stallion leaps into the air, tucks his forelegs under him, and kicks out with his hind legs at the top of the jump. 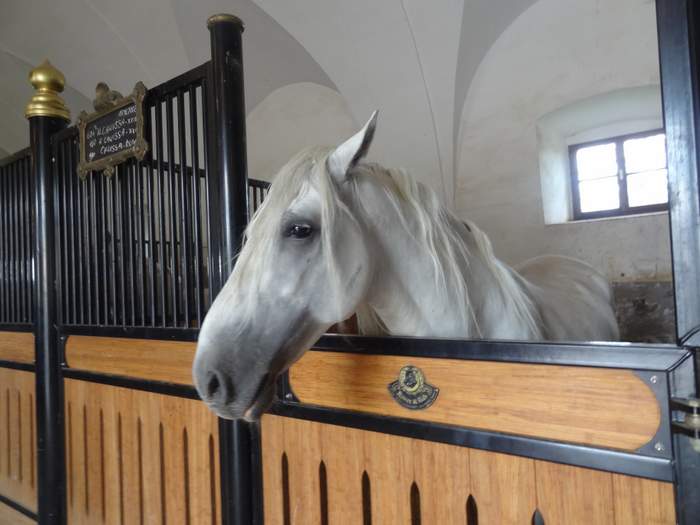 One of the stud stallions privileged to reside in the farm’s most spacious and venerable barn. His name reflects his parentage.

To do these movements calls for years of training. Only stallions are enrolled in this high-level equestrian university, because mares would have to interrupt their studies with every pregnancy, and the course is too intense. No one horse can perform all the airs above the ground but those who execute their specialties with panache are a delight to the audience. 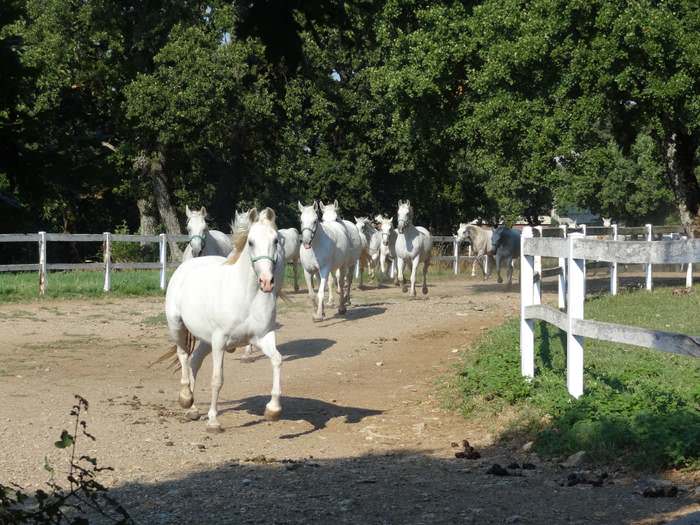 Mares on the march — transitioning from paddocks to pasture happens every day.

The movements were originally part of the horses’ military training. Lipizzaners were created partly as weapons of war at the behest of Archduke Charles II, son of the Habsburg Emperor Ferdinand I, who purchased the Lipica estate from the archbishop of Trieste in 1580. The noble wanted a horse that would be swift, strong, and agile – an ideal war horse that would also look good during victory parades. Conceived as instruments of combat, Lipizzaners today are symbols of grace and refinement. UNESCO is expected to recognize Lipica’s stables and horses as a World Cultural Heritage Site, and rightly so. 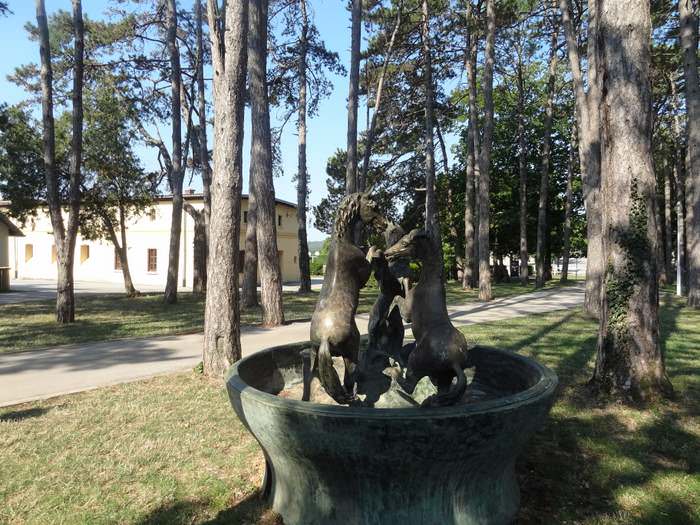 The beautiful grounds in Lipica, Slovenia include statuary and historically important buildings.

In 1996, the Stud Farm became a protected property of the state of Slovenia. The horses, their training, and the buildings on the property are considered part of the country’s cultural heritage, to be preserved protected, and presented as such. Lipiça is not and does not want to become a Disneyland for horse lovers. Guests are called “visitors”, not “tourists”. There are no longer pony rides for children or day rides for inexperienced adult riders, as was the case in the 1970s and 80s. Just as a Sunday driver shouldn’t test-drive a Ferrari, an amateur rider shouldn’t take the reins with a Lipizzaner. Serious adult riders can book a week’s worth of lessons, staying at the Maestoso Hotel on site and learning from some of the Stud Farm’s 17 trainers and show riders. 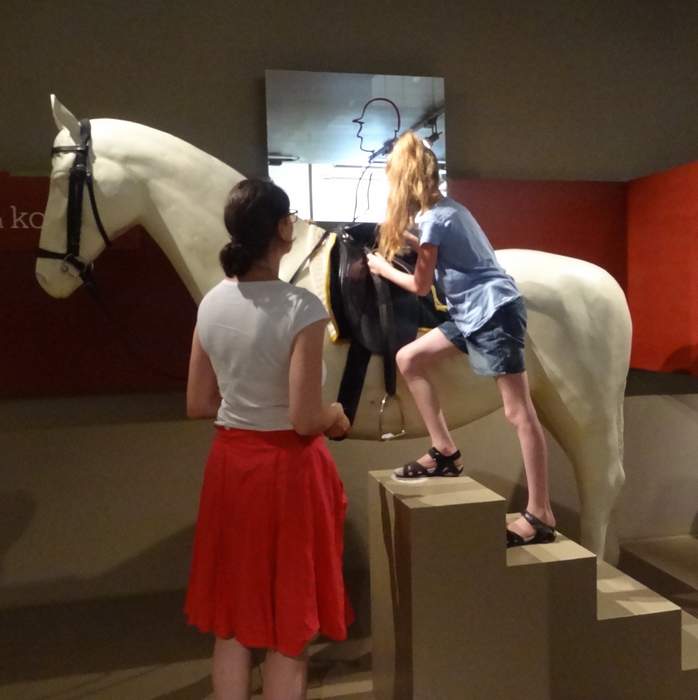 A tactile exhibit at the Lipikum Museum.

A building project partly financed by the European Union will be completed by the end of 2015, coinciding with the Stud Farm’s 435th anniversary. It adds WiFi throughout the estate, creates new museums of carriages and culinary arts (no horsemeat allowed!) to join the existing horse museum, and improves the hiking and biking paths that crisscross the property.

I' was there for the 400 year celebration. I can't wait to come back. As mayor of Old Mill Creek Illinois. Where Lipizzaner outnumber people. We consider lipica a sister village

Oh how wonderful that would be, defnitively on my wishing list!!