Standing at the top of the Devil’s Staircase, I looked around and wondered how a spot this lovely got such a sinister name. There was certainly nothing in the area to conjure thoughts of fire and brimstone at the highest point along one of the UK’s most famous hiking trails – the West Highland Way. From my rocky perch, I 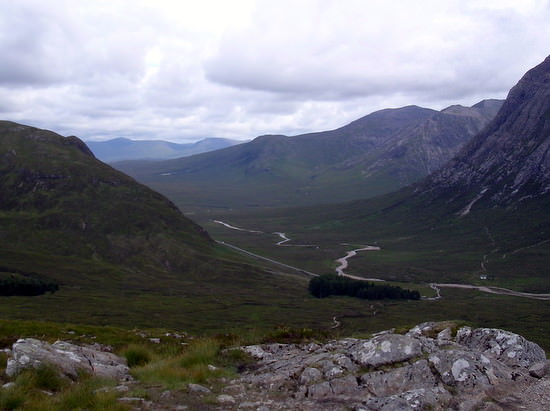 looked south at an almost perfect pyramid of rock called Buachaille Etive Mor. In Scots Gaelic the name means ‘The Great Shepherd of the Glen’ and this mighty mountain stands guard at the confluence of two lush, waterfall-lined valleys. The view was inspiring, magnificent, heavenly. Something I’d come to expect over the seven days I spent on the trail.

To my north, I could see the crown of Ben Nevis, the UK’s highest peak, lit up by the early summer sun. 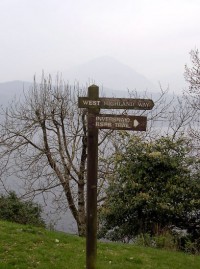 Before the ‘Ben’, lay miles of pristine wilderness and jagged ridgelines dusted from a late snowfall. I could also see my route cutting a path right through the heart of some of this planet’s most beautiful country. The West Highland Way is Scotland’s premier long distance hiking trail and I’d already trekked more than half of its 95 mile length. I turned again to take one last look at the Great Shepherd and spotted a group of ant-sized climbers on the mountain’s north face working their way up a thousand foot route.

Then, out of nowhere, a gust of wind brought sleek, grey clouds through the 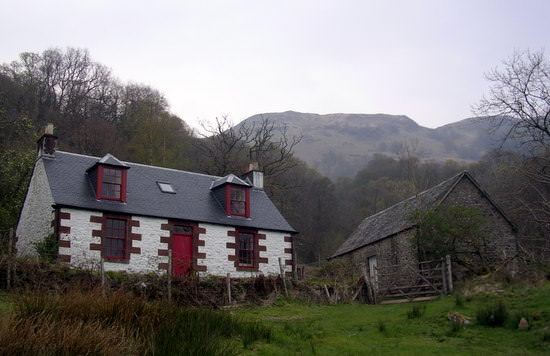 valleys. The harsh Highland winds carried with them drops of rain and a big temperature drop. The Devil’s Staircase was starting to earn its name and I was suddenly caught between two contrasting weather systems; sunshine to the north and a rising tempest to the south. I zipped up my jacket as high as it would go as a long shiver worked its way down my spine. I headed north towards the shrinking sunshine that I hoped wouldn’t disappear before I got to it. The notoriously moody Scottish weather was kicking up and I had ten more miles of rugged terrain to go through before I could pitch my tent for the night. And this was summer on the West Highland Way. 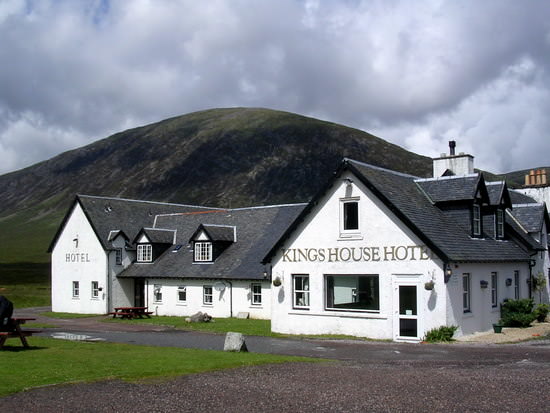 At 95 miles, the West Highland Way is the longest footpath in Scotland. Usually walked in six to seven days, the trail is one of Europe’s most popular and on any given day, you’re likely to meet Dutch, Australian, Israeli, German, Canadian, American and French hikers along with a healthy dose of the fun-loving natives. What makes the West Highland Way so appealing to Europeans and North Americans, other than its dramatic beauty, is what lies along the trail. Quiet, historic villages complete with cozy pubs, smoke billowing from their chimneys, wait to welcome you at the end of a long day on the trail. Seeing the  villages and interacting with the locals means that time spent off your feet is just as meaningful as the time spent on them. The small hamlets along the Way offer civilization, comfy beds and a place to fill up on hearty Scottish food and drink.

The West Highland Way starts on the northern edge of Glasgow , Scotland’s largest city, and is made up of old drover’s trails, military roads and disused railroad tracks. And the terrain varies from mild, Lowland moors to dramatic, almost alpine settings.

A small, grey obelisk in the quaint village of Milngavie marks the beginning of the footpath. In a quirk of articulation that happens frequently in Scotland, the village of Milngavie is pronounced in no way whatsoever as to how it looks. The word Milngavie comes off the lips as mull-guy making it one of the many oddities of the Scots dialect that leave foreigners constantly shrugging their shoulders.

From the leafy village with the funny name, the West Highland Way begins its slow meander north, snaking its way through pastoral farmland where you quickly learn to share the trail with sheep, feral goats and very large and stubborn cows. 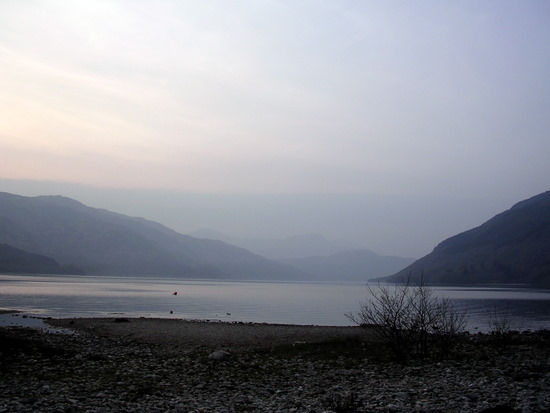 On day two, after a night camping under a fingernail moon in a farmer’s pasture, I headed up and over Conic Hill and the Highland Boundary Fault.  Hiking over Conic Hill is the Way’s first real test as you climb up and over the 1200 foot hill. Your reward for topping out is a breathtaking view of Loch Lomond , the UK’s largest freshwater lake.  From the top of the hill the Highland Boundary Fault is an obvious geological feature that leaves the Lowlands behind you. From here, the harsh, lonely beauty of the Highlands stretches out for miles to the north. 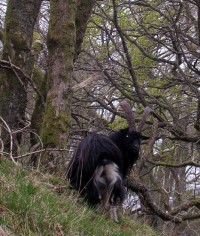 The trail then takes you along Loch Lomond’s rugged, untouched eastern shore. Sunlight flickers off the loch’s surface which turns mysterious and foreboding when the fog rolls in, which it almost always seems to do. This part of the Way is also Rob Roy country. It is along Loch Lomond’s banks that the famous Scottish rogue kept his prisoners and hid from the Redcoats looking to put an end to his cattle rustling ways.

From the bonnie banks of Loch Lomond, the trail heads deep into the Highlands where you’ll walk underneath some of Scotland’s highest peaks and through the heart of Highland culture. With villages dotted along the way, you’ll never have to sleep in a tent if you choose not to but there are plenty of places to camp along the path. But even if you do camp, make sure you stop in a pub or two to talk with locals and fellow hikers over a wee dram of whisky and a plate of haggis, neeps and tatties. 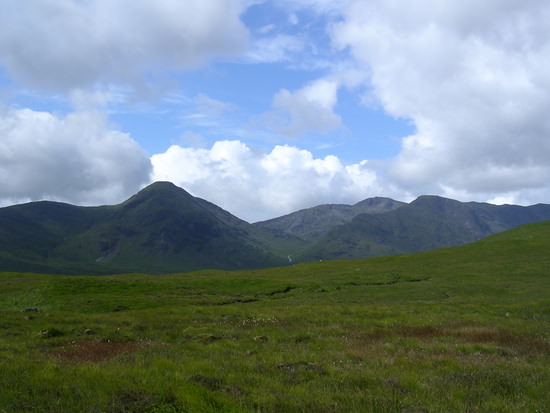 The popularity of the trail, roughly 85,000 people walk all or part of it each year, supports an entire tourism industry ready to cater to you. There are even pack carrying services that will pick up and drop off your rucksack at predetermined locations each day.

But back on the Devil’s Staircase, there didn’t seem to be much in the way of accommodation for me. My long, hard slog wasn’t going to walk itself so I left the Devil’s Staircase and its chilly winds behind. Wet, cold weather set in for the next couple of days and anyone making plans to walk the Way should prepare for at least a few days of bad weather.

Worn-out yet content and at peace, I woke early every morning and set out down the foggy path, walking-stick in hand to see what awaited me that day. At the end of my second to last day of walking, wet and chilled to the bone, I figured the best part of the experience was in my rear-view mirror. Trudging over a 17th century stone bridge, I headed into a deep, wide valley cut in half by a fast-moving river. I walked past a small walker’s pub 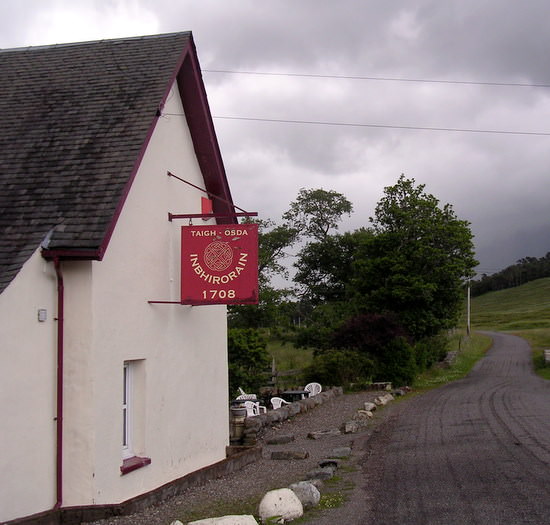 with steamed up windows and pitched my tent next to the water.

I quickly headed back to the pub to find it full of the wet and weary. A Scotsman was holding court, spinning tales, telling jokes and making everyone feel welcome.

As I walked in, he shouted, “And we’ve got another cold and lonely lad to look after. Someone get him a whisky.” Instantly, I realized the best of my walk was far from behind me and took a seat at the bar. I sipped of my whisky, got off my aching feet and sat back to enjoy the show.

>>Make sure to check out our Hiking Packing List for Day Hikes and Multi Day Treks.

You give a great account of the variety of the West Highland Way and the pleasure of the walk.

The origins of the name "The Devil's Staircase" are unclear but one story I enjoy goes as follows.

When the navvies were building the hydro electric project and Blackwater Resevoir, they were based in Kinlochleven, a DRY company town.

Kingshouse Hotel was the nearest pub and the Irish workers would brave the 9 mile walk for a brew or two. Needless to say a few didn't make it back over the "Devil's Staircase" on the way home and perished by the path after one too many.

Not sure if there is any truth to this story but I like it.