Cardiff has come a long way from its humble beginnings as a Roman fort in approximately 75AD.  Officially the Welsh capital since 1955 and home to the devolved Welsh parliament since 1999, Cardiff has quickly become a hip and trendy handout. The city offers a bit of flair and a fun alternative to more frequented cities in England and Scotland. While many tourists explore the Welsh countryside, known for its stunning shorelines, great hiking routes and gorgeous landscapes, the city of Cardiff has its own charms. Some of the best places to hang out and explore the city’s vibe include: 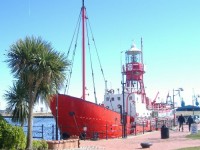 •    Cardiff Bay is the epicentre of the city’s transformation to a tourist destination. Once one of the largest coal docks in Europe and still a bustling transportation center, now the quay is filled with art centres, boat tours, shopping, and is home to the National Assembly, the seat of Parliament in Wales. Mermaid Quay has a little something for everyone, with upscale shops, bars and cafes, and even a comedy club. Cadwalader’s Ice Cream, at the end of the complex, is known not only for its tasty dairy treats but also stunning views of the bay. For a little bit of fun, why not book your hotel here at the bay – highly recommended is The Big Sleep Hotel, described as “super cheap but sexy-chic” and recently voted as one of the 25 coolest hotels in the world.

Cardiff Castle began its life as a Roman fort over 2000 years ago and has stood here ever since.  Improvements in the 1800s to the interiors of the structure resulted in the decadence visible on tour today. A real highlight of the tour, which includes a free audio guide, is the “Arabian Room” decorated with a vaulted stone ceiling adorned with gold. Tickets are £8.95 but if you opt for the £11.95 premium tour, you can get an hour guided tour of the castle apartments. While this is certainly recommended, just touring the castle itself takes around three hours to tour, so keep your schedule in mind. 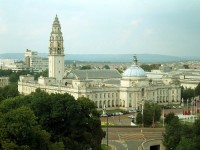 •  City Hall shows off the best of Cariff’s Edwardian architecture. The four-face clock tower is a classic Wales landmark and a photographer favorite. The building was opened in 1906, a year after Cardiff was given a royal charter. There are normally several quite exquisite art collections available to view, but sometimes rooms are booked out for private functions. The lobby has a number of marble statues commemorating figures in Welsh history, such as King Henry VII and Sir Thomas Picton.

•    Bute Park is the city’s green lung, just behind Cardiff Castle, and offers a stunning landscape of nature, recreation, and art. Cardiff is a rough translation of the Welsh phrase “fort on the river Taff”, so visit the city’s roots with a stroll alongside the River Taff here in the park. The Taff Trail, a great walk that connects some of the major sights in the city, can be joined nearby the river. The park’s landscaped layout is the result of improvements made in the Victorian era by the 3rd Marquee of Bute.

Wales is plagued by the same wet, windy weather found across the rest of Great Britain. Thus, summer is by far the most popular time to visit and explore. Train is the quickest option to get to Cardiff, around two hours from London’s Paddington station. The Cardiff airport serves the major European hubs, such as Amsterdam and Paris, as well as Dublin. Cardiff city has an extensive bus service, but don’t overlook the aquabus option for travel to and from the bay.