Fresh grilled trout, fields of wildflowers, battling queens,and a lofty mountain—Paradise can’t get better than that. This particular paradise is Gran Paradiso National Park, in northwestern Italy between Aosta Valley and the Piedmont region. Established in 1922 on land that had been saved as a hunting reserve, it was the country’s first national park. Its main snow-covered peak, Gran Paradiso, is the highest mountain in Italy, rising to 13,323 feet in the stunningly gorgeous Alps. Downhill and cross-country skiing are popular (no lifts, though), and several tour groups offer guided trips that include overnight stays in mountain huts (rifugios). Summer visitors go trekking, mountain climbing, and camping. 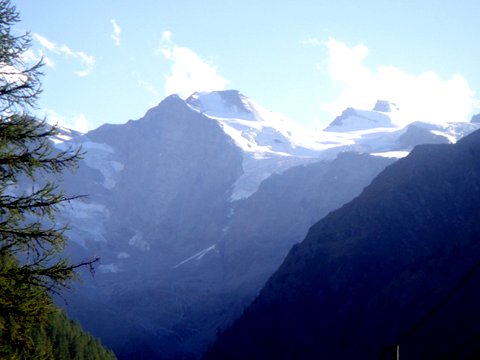 John and I stayed in the sweet little town of Cogne, a former miners’ village tucked into a valley just inside the eastern edge of the 270-square-mile park. It faces a rushing river on one side and wide green meadows on the other, with steep hills and mountains in all directions.

From the tiny balcony off our room at Hotel de la Tor, we had a fine view of the valley and Gran Paradiso’s high, snow-covered sprawl. Hotel de la Tor offers mid-range prices, friendly hosts, comfortable rooms, and a chef who’s skilled at preparing regional dishes. I hesitated over spreading lardo (delicate white pig fat) on the fig-walnut bread served with nuts and honey, but decided that when in Cogne do as the Cognese do. Smearing bread with butter from cows isn’t that different from using lardo, considered a light, tasty delicacy. 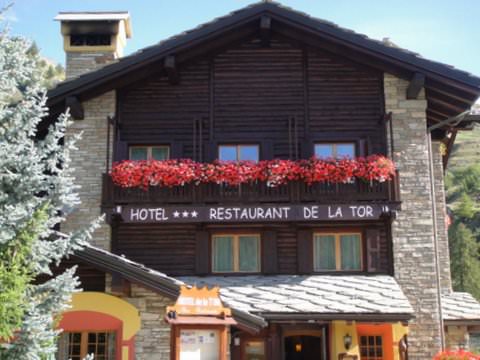 Two other fine hotel choices in Cogne are the 4-star Hotel Bellevue and Hotel Sant’Orso. The Bellevue is expensive but has amenities and luxuries, including a swimming pool, spa, and three good restaurants. We liked Brasserie du Bon Bec, with its alpine atmoshere and well-prepared dishes such as veal casserole and potato/cheese tart. La Pierrade is a house specialty—you cook your own meat, tomatoes and onions on a sizzling hot stone brought to the table.

Hotel Sant’Orso has attractive rooms and, a boon to families, a playground. It also boasts a restaurant with a valley view and, when we were there, a hostess dressed in full-skirted Tyrolean garb who entertained every table with her friendly charm. Entrees on the interesting menu included venison with juniper berries, suckling pig with caramelized oranges, and chicken breast with sage. As in most Italian restaurants, there was a wide choice of wines at reasonable prices. 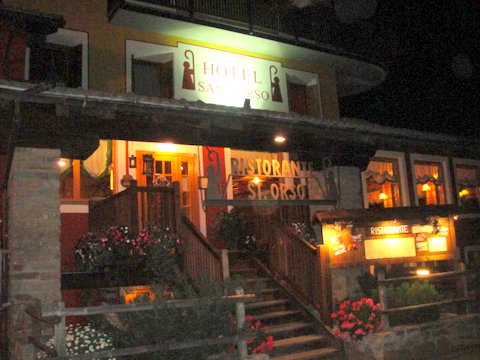 Strolling through Cogne, which is noted for the fine quality of its intricate handmade lace, we watched lacemakers in a cooperative working at their spindled looms. Cogne is also the home of highly skilled wood carvers, and some of their works are sold locally. 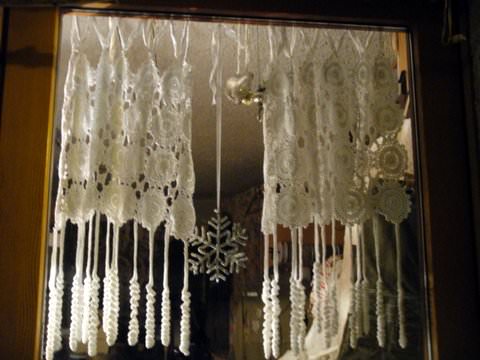 We passed numerous shops selling outdoor and climbers’ gear, peeked into a few woodcrafting studios, and picked up maps at a well-run visitors’ center. These were stops along the way to the main attraction: paths that crossed daisy-starred meadows, edged the river, and climbed to higher mountain trails. We chose a path that turned upward, switchbacking through pine trees to a lovely waterfall. Other hikers continued on more challenging trails, up the steep terrain to sweeping views across snowfields, grassy valleys, and tumblng streams. 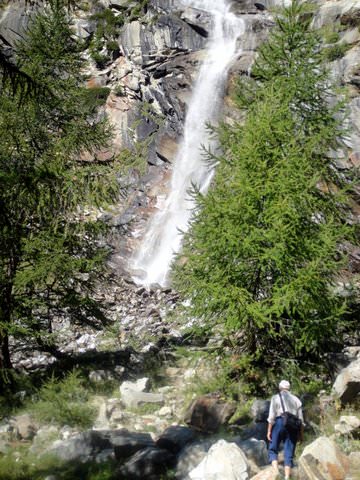 Waterfall on hillside above Valnontay valley

Gran Paradiso Park has 60-odd stream-fed lakes and ponds, 57 glaciers, and meadows spangled with blue, white and yellow wildflowers in season. Blue gentians, alpenrose, and lilies were bright spots of color in the rocky landscape. Paradisia Botanical Garden near Cogne, open to visitors for a fee, grows about 1500 plant species. Our return trip ended at the Valnontey, a lively, casual restaurant on a hillside by a  grassy meadow. People at picnic-style tables were feasting on mounds of polenta, pasta, and cheese. We opted for ravioli and trout, both excellent. As we left, a small herd of ibex bounded from the steep, forested hillside into the meadow. They calmly grazed, not at all bothered by gawking tourists. Ibex are protected here; not long ago their numbers were low, but they have increased manyfold. Other wildlife in Gran Paradiso Park are rabbits, chamois, weasels, birds, butterflies, and the more elusive lynx. 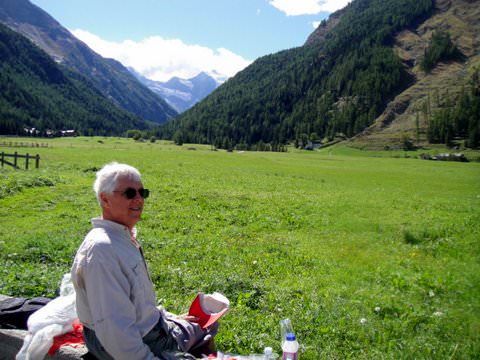 John at meadow and valley in Gran Paradiso National Park

This is dairy country, where flavorful cheeses are produced. A few of the many cows you see in the region’s pastures have another occupation: head-wrestling.  These are the battling queens, trained to lock horns and push and twist against each other until one gives way. Throughout the local villages, regular competitions are held—the “Battles of the Queens.”  That’s life in Paradise. 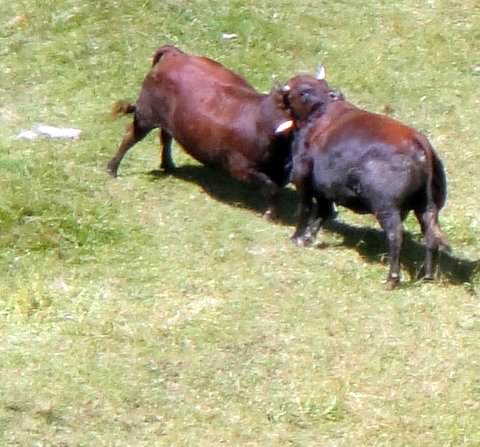 We love Cogne summer or winter. We worekd there for a winter, a number of years back in Valnontey. It was amazing all the wildlife that you could see up close and personal. Beautiful area.

I'm wondering, how was the lardo?

This national park is very nice place to visit in Italy. Thanks for sharing details about this very nice spot in details.